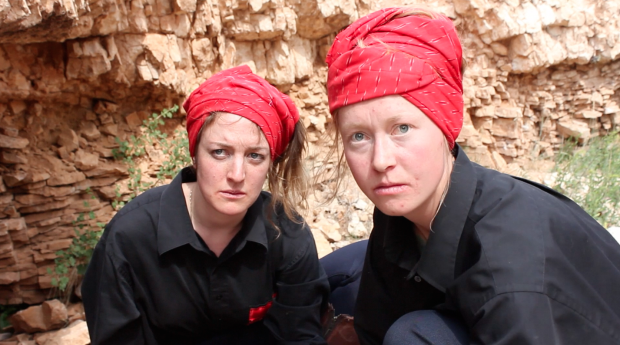 ‘Battle of the Peach’ was one of 18 shorts featured in the first Laramie Local Film Festival. The festival ran at the Gryphon Theatre and cost only a quarter to attend. 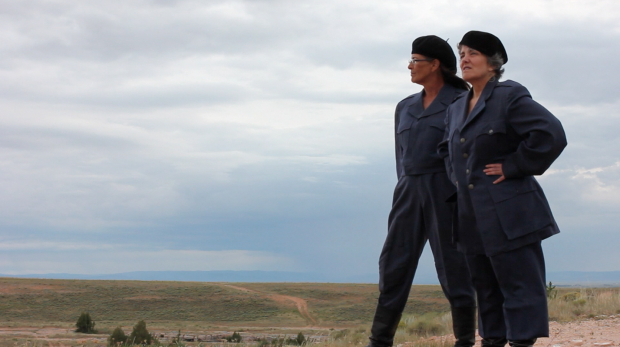 The actors in ‘Battle of the Peach’ reversed gender roles, with women portraying high-ranking military officials. 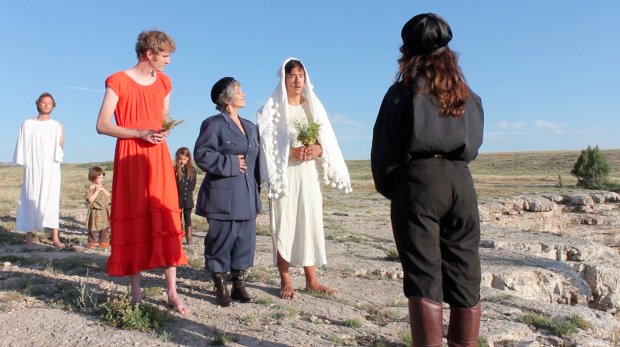 ‘Battle of the Peach’ is an absurdist comedy that became a silent film when a small-budget and low-grade sound equipment forced the director to borrow a page from Charlie Chaplin and Buster Keaton.

Wiley Combs sipped on a Pabst tall boy as he fiddled with the mixer on a makeshift control board inside Gryphon Theatre.

Combs was elbows deep in technical difficulties an hour before the Laramie Local Film Festival’s opening. But he kept his composure.

“My life is catastrophe after catastrophe,” he said. “But I always seem to figure out the problem.”

Combs organized the Dec. 13 festival on behalf of “News From Nowhere,” an open submission, Laramie-based art publication where he serves as editor, promoter and Renaissance man.

For the festival, Combs accepted the work of any artist willing to contribute. He offered cheap beer to draw a crowd. Admission cost a quarter.

When it was show time, the projector flickered and sound echoed through the theater without a glitch. The 80 people in attendance kept quiet, their only noise coming from popping beer tabs.

The audience watched something unusual for Wyoming: 18 short films made by people unafraid to cast their ideas, friends and shortcomings on screen.

Low-budget filmmaking could be considered the neglected stepchild of the Wyoming arts scene. The network of filmmakers, actors and production crews is too small to even be categorized as a microcosm. The state multiplexes and theaters mainly show the heavy hitters of the box office. Underground events like the festival are the primary venue for Wyoming-made films.

No one wants to see the state’s film scene grow more than its filmmakers. They are an interconnected bunch of students, artists and local professionals.

They don’t treat filmmaking like a competition. It’s a way to build community. Directors of one film produce on others. Actors perform in one movie and hold microphones in another production.

“We want there to be a ‘Lari-wood’ someday,” said Nid Collins, director of “Thrown Down” and producer of “North of the Colorado Border,” both of which played at the film festival.

Collins works with disabled adults during the day. In his spare time, he writes novels and works on film. Sixty-eight people helped on “Thrown Down” — a deadpan drama about a woman who lives a double life — over the course of 10 weekends. One was a professional actor. The majority were Collins’ coworkers.

Collins started the Wyoming Filmmakers Collective, an online resource for anyone in the state’s film industry. He envisions a world where anyone with scripts, cameras, microphones and spare hands is willing to collaborate on different productions.

“There’s no reason Wyoming can’t have a decent film industry,” he said.

Slapdash and improvisation are integral when making low-budget films. None of the movies at the festival cost more than a few hundred dollars to create.

Sofi Thanhauser’s “Battle of the Peach,” an Avant-garde exploration of gender roles, also played at the festival. It wasn’t supposed to be a silent film when production began. But a lack of equipment and money led her to cut dialogue and use the techniques of Charlie Chaplin and Buster Keaton to convey conversation.

Thanhauser used friends, professors and their children as actors. A friend shot the film for free. She only spent $85 on costumes.

Her film didn’t have a glitzy Hollywood patina, but it did carry an authentic layer of cerebral comedic drama.

The film starts with a wide shot of two military figures standing on a bluff. As the camera moves in, the viewer sees the high-ranking officials are women. One is holding a spyglass to view the oncoming enemy.

“I’m never this flatulent when danger is near,” the one general says to the other.

“I know what you need,” her partner replies.

The scene fades with the two walking away and then jumps to a shot of the women at the door of a Western brothel, where shirtless men in flesh-colored booty shorts are advertising their assets.

The women are eyeing the prizes, running their hands on chiseled chests and imbibing in drink.

As the film continues, the generals’ licentious behavior gets the best of them. For the viewer, the militarized matriarchs are a pleasant change from the stereotypical roles of women in film.

Thanhauser, a grad student in the University of Wyoming’s English department, claimed she wasn’t trying to subvert the roles usually portrayed by men and women on screen.

“I don’t think it’s bad to have women as objects,” she said. “But I wanted to see what it looked like to have men as objects on screen.”

Film on the fly

Victor Miller acted in “North of the Colorado Border,” a Hitchcockian horror-comedy that also played at the festival.

Miller and the director, Greg Asay, grew up filming skits together with VHS cameras. Asay is a Cheyenne attorney who studied film before attending law school.

They wrote, shot and produced their movie on the fly, using the 1970s Remount Ranch murder mystery as source material. Asay had a camera. Miller and the other actors used their own props — including a tomahawk — for the film.

The pair filmed near Vedauwoo in the Medicine Bow-Routt National Forest. The film cost less than a weekend trip to Jackson Hole. “There’s no reason why filmmaking should be exclusive to people who have money,” Miller said.

Historic brewery is making a case for reusable beer bottles

Historic brewery is making a case for reusable beer bottles

How to prevent obesity in senior dogs

How to prevent obesity in senior dogs

It’s a good time to be a home seller — homes are selling fast and for a premium — but that doesn’t mean you can jump into the market ill-prepared.…

Ask the Builder: Don't take your contractor to court; do this instead

How many horror stories have you heard about homeowners who want to sue their contractor? These disputes arise for numerous reasons, but in almost all cases it comes down to defective workmanship. Sometimes it’s non-performance, when the contractor vaporizes and stops showing up at the job. In rare cases, it’s actually fraud in which the contractor takes a deposit and disappears.

‘Battle of the Peach’ was one of 18 shorts featured in the first Laramie Local Film Festival. The festival ran at the Gryphon Theatre and cost only a quarter to attend.

The actors in ‘Battle of the Peach’ reversed gender roles, with women portraying high-ranking military officials.

‘Battle of the Peach’ is an absurdist comedy that became a silent film when a small-budget and low-grade sound equipment forced the director to borrow a page from Charlie Chaplin and Buster Keaton.