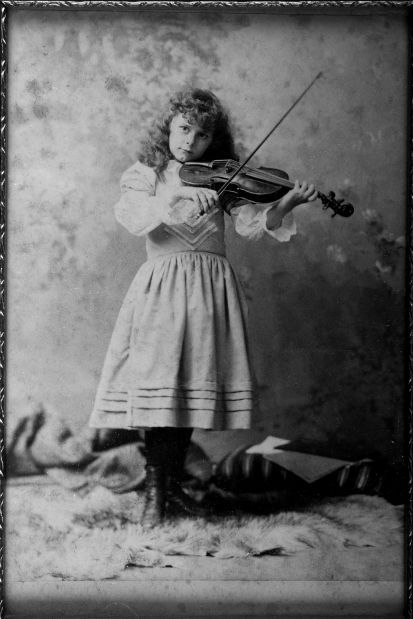 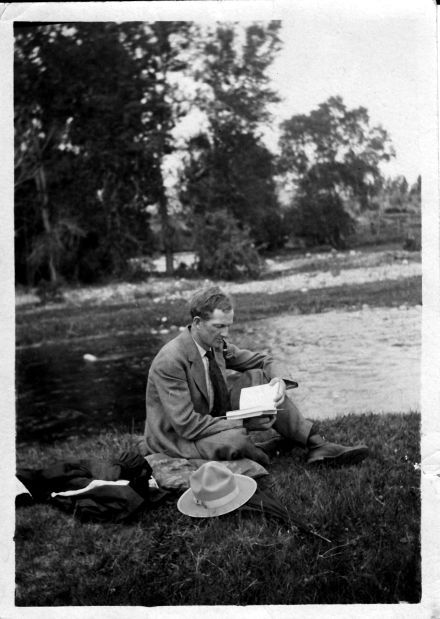 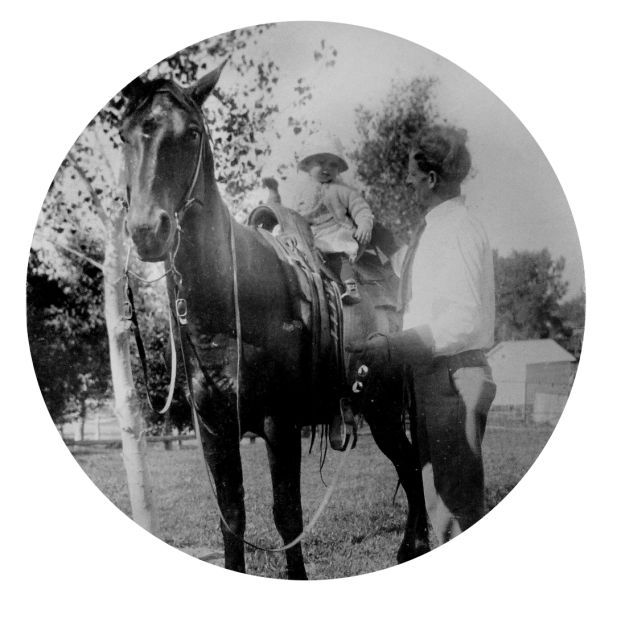 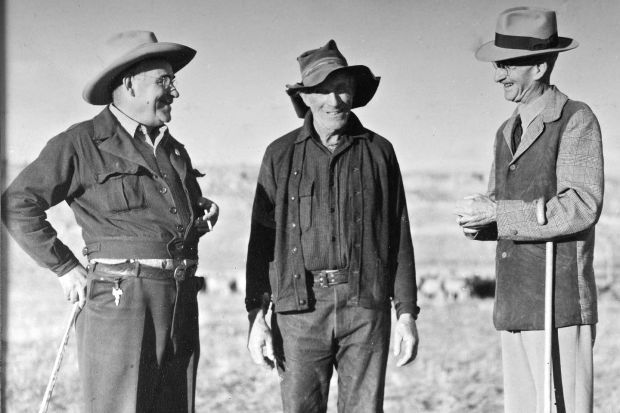 Alexander Healy, far right, talks with a foreman and ranch hand in this undated photo. 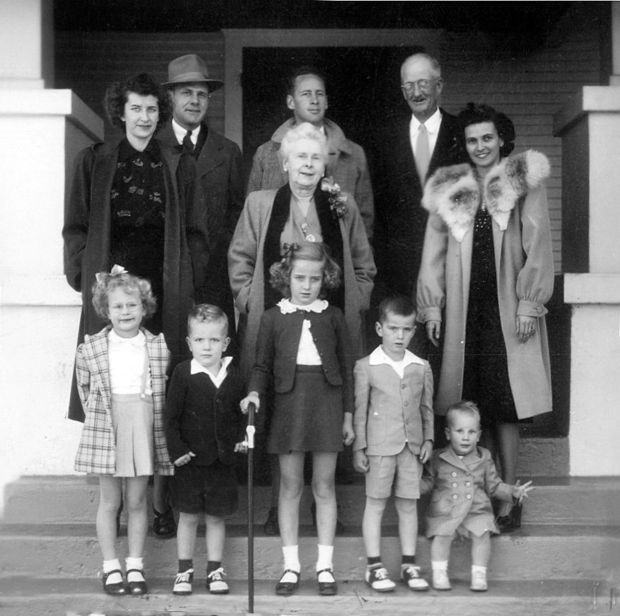 Members of Edith Healy's family pose in 1948 for a picture on her porch in Worland. Edith Healy is in the center, Cathy Healy, author of "The Improbable Pioneer" is on the front left. (Photo courtesy of Cathy Healy) 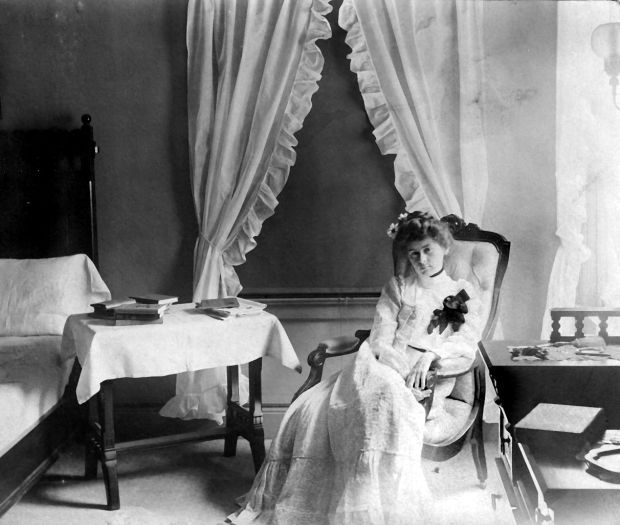 Edith Holden (Healy) poses in this undated photograph in her bedroom in Boston.

Edith Healy wrote everything down. She documented sandy hills and dried up grass, snowcapped mountains and cottonwood lined-creeks. She wrote about train travel and of life in a sheep wagon.

More than a century later, Healy’s letters to her widowed mother in Boston have been published in a new book, “An Improbable Pioneer.” The letters offer a window into early 20th century life in Wyoming and tell the tale of a woman who went from playing the violin in a Boston women’s symphony to navigating life on the Western frontier.

“It’s invaluable. We now have a complete history of that time period,” said Cheryl Reichelt, executive director of the Washakie Museum and Cultural Center. “When you read it you know what it looked like, it’s just that good. It’s our history and it’s very well written and those letters are amazing.”

Cathy Healy, a retired National Geographic writer and editor, spent two years putting together the 396-page book using her grandmother’s letters and pictures and filling in pieces of history from archives. Author and museum are now teaming up to teach other people how to record their own families’ stories.

“When you’re gone, you’re gone,” Cathy Healy said. “And if you haven’t captured that, it’s gone too.”

“The way that car skidded was enough to make your hair stand on end. By skidding, I mean slewing around in the mud when the brake has no hold on it. We ploughed (sic) through mud, up sides of hills, slipped and slid across bridges that had no side rails… When two hours of this had passed I thought to myself, well I don’t believe I can stand much more and I asked how far we were from Sheridan. Twelve Miles!!!! was the answer. Forty miles between Sheridan and Buffalo and we had come twelve in two hours… Well I said to myself, I’m in the hands of Providence and I’ve got to take what’s coming to me and if I am in need of training in Western nerve, here’s where I get it good and plenty.”

That is how Edith Healey described the drive from Buffalo to Sheridan in a letter dated April 23-25, 1911.

Edith Healy came from class and privilege. She played the violin and graduated from what was then the Boston Girls Latin School. Her family was among the first wave of Europeans to arrive in the Americas, landing on U.S. shores with and shortly after the pilgrims. Her father ran a successful insurance agency.

But six years after his death, Edith Healy’s widowed mother told her it was time to live her life.

She was 32 when she married Alexander Healy, a sheepman from Utah educated at the Massachusetts Institute of Technology. In 1911, she joined him in Buffalo where he and his brother were running the family’s sheep business.

She never forgot her widowed mother.

“The letters were written to make her mother feel completely part of her life. That is why there is so much detail,” Cathy Healy said. “She’s saying, ‘You’re part of my life, I haven’t left you.’”

Cathy Healy, 70, knew about the letters growing up, but didn’t think much about them until her dad began dying of cancer.

“I would come home from National Geographic on vacation and in looking for things to do together, he and I came up with the idea,” she said.

Her father, Dan Healy, could read his mother’s sprawling, loopy handwriting. Cathy Healy, a professional journalist and writer, could type as fast as he read. Her aunt brought more letters and both explained events or words like Uneedas crackers – which were saltines. Cathy Healy wanted that information recorded before her dad died.

“The idea always was, let’s clean up the typos and put them into a spiral and give to them to the family,” she said.

It took 21 years before Cathy Healy would return to the letters. This time, it was to make them into a book.

“When I got into the project … I saw it was a jigsaw that wasn’t complete, there were lots of missing pieces and we kept discovering more letters,” she said.

She poured through newspaper clippings online and archives from the Johnson County Library and Washakie Museum written at the same time her family lived in and around the Bighorns.

The book was finally finished in July. The Washakie Museum published it, and will keep any proceeds from book sales.

Edith Healy’s letters, pictures and stories are unique. Many families don’t have 3,000-word detailed, near-daily accounts of life in early Wyoming, said Reichelt, the executive director of the Washakie Museum.

But families still have worthwhile stories to tell.

Reichelt, Cathy Healy, her editor, Susan Simmons, and other area libraries are working on grants to provide local workshops on recording family histories.

“Some people may not care about publishing it as much as they do getting it preserved,” Reichelt said.

And preservation is the important part, she said. If the stories aren’t recorded in some way, they are lost forever, not just to families, but to society as a whole.

“Well, my last letter was telling you of the ride over, but I only told you the disagreeable part. I didn’t tell you how beautiful the scenery was. Hill after hill without a tree and some of the hills were bright red in color… I certainly am pleasantly surprised with it all,” she wrote in a letter dated April 26, 1911.

Edith Healy’s first impressions of the land stuck. She and her husband stayed in the Cowboy State, had two sons and adopted two daughters.

They traveled the world from Europe to Latin America.

She helped Girl Scouts in the Big Horn Basin grow to more than 1,000 members. She served on the organization’s national board of directors and organized the town’s community concert series.

Through everything, she wrote letters, often propped in her bed in the morning, sipping tea and scribbling in the sunlight, Cathy Healy wrote in the book’s introduction.

Her final letter in the book is dated Jan. 8, 1946 and addressed to her husband to be read after she died.

“Sweetheart, - We have had a wonderful life together haven’t we. No one could have had a finer husband than you have been and I do appreciate everything you have done. I’ve had a glorious and interesting life and enjoyed it to the utmost.

Christmas decor shopping guide: How to find the right decorations for you

Even though Christmas has been celebrated for centuries, you’re not restricted to decorating in the classic style, unless that’s the style you prefer.

Q: My dad purchased an investment property in 2006 for $150,000. He put my name as joint owner with him. His intent was for me to become the sole owner of the property after his death. He died late last year. Prior to his death, he managed the property and did everything that had to do with the property. He took all the tax benefits and tax deductions having to do with it.

A toilet of a different color? When in doubt, go with white

The 1970s did have some wild toilet colors. When a toilet needs replacing and the color has been discontinued, a white toilet is an easy choice.

Can a would-be tenant break a lease and recoup the deposit?

Q: Because of COVID-19, I signed a lease prior to seeing my apartment. I was advised it was under renovations. After I signed it, I was shown the apartment and it was uninhabitable. I did not move in, and I don’t have the keys.

Alexander Healy, far right, talks with a foreman and ranch hand in this undated photo.

Members of Edith Healy's family pose in 1948 for a picture on her porch in Worland. Edith Healy is in the center, Cathy Healy, author of "The Improbable Pioneer" is on the front left. (Photo courtesy of Cathy Healy)

Edith Holden (Healy) poses in this undated photograph in her bedroom in Boston.