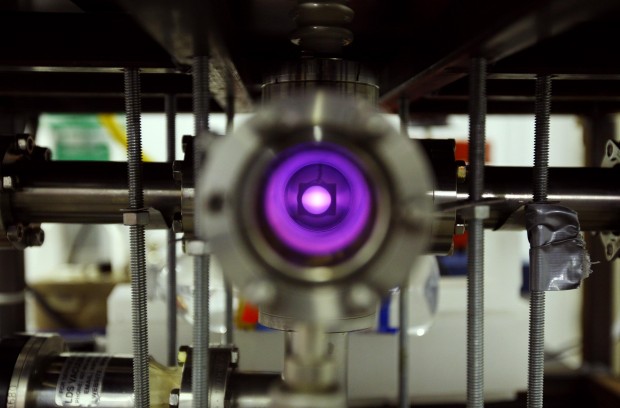 Conrad Farnsworth of Newcastle built an inertial electrostatic confinement fusion reactor in his garage. The glow comes from 600 million degree plasma at the heart of the nuclear fusion reactor. 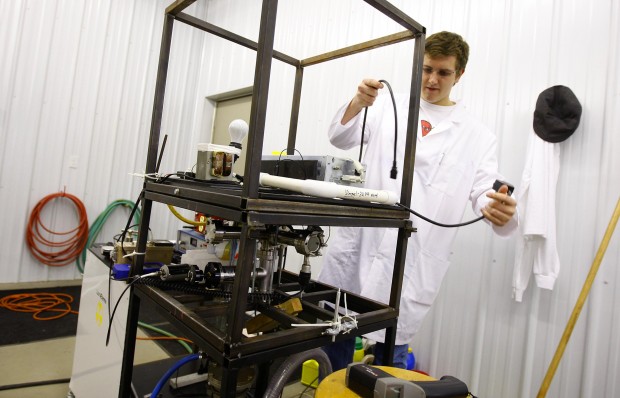 Conrad Farnsworth shows off the fusion reactor he built in a shed. 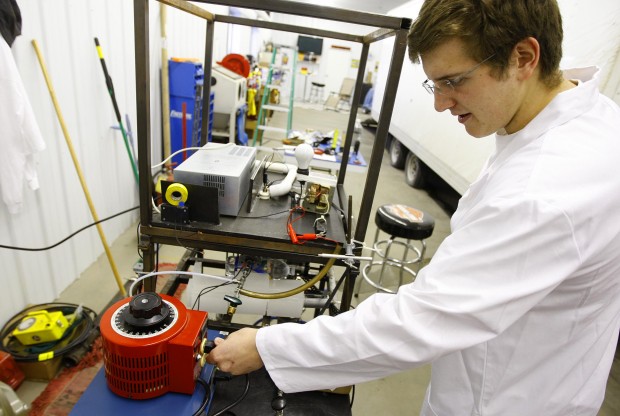 Conrad Farnsworth, 18, is the only person in Wyoming to achieve nuclear fusion and one of only about 15 people in the world to do it who are still in high school.

He’ll greet you in his driveway in his white lab coat, offering you a pair of safety goggles.

At least that’s how he greeted me.

On Jan. 17, Conrad wore an “Angry Nerds” T-shirt under his lab coat. Think Angry Birds, but with pocket protectors. We walked together to his dad’s metal shed, big enough hold both the truck his dad is restoring and Conrad’s machine, the one I’ve driven to his house to see. It’s the old next to the new — a 1972 Chevy next to a nuclear fusion reactor.

The reactor is a maze of steel, cable, tubes and boxes. Cords wrap around several shelves and stretch to a nearby table. When he plugs it in, it gurgles and groans.

“This is my Inertial Electrostatic Confinement Fusion Reactor. It works on the property of inertial electrostatic confinement,” Conrad says.

Conrad, 18, talks fast — faster when he’s explaining this machine, a project he started at 16. Its plasma heart rises to a temperature of 600 million degrees. It glows bright blue and purple. It strips gas out of its outer electron shell.

Don’t worry if that makes no sense. Many science fair judges don’t get it either.

Conrad is the first person in Wyoming, and one of about 60 in the world, to achieve nuclear fusion. Only about 15 of those are in high school

Conrad is a self-professed nerd. He’s not shy, doesn’t stutter and isn’t prone to tripping over his feet. He doesn’t act like he’s smarter than you, though he likely is. He just really likes science.

At 3, he took apart his mom’s sofa recliner. At 17, he started his own iPhone repair business. He’s not afraid to make mistakes, to blow something up or to start something on fire.

“I don’t think I’ve taught another student who individually made science seem as cool as Conrad has,” said Sharla Dowding, his Newcastle High School science teacher.

Friends tease him about his exploits. They expect the fire alarm to go off one day and to discover that Conrad is the source of the explosion. Classmates in his high school English class nominated him as one of the most interesting stories in Newcastle.

When he was 3, Conrad found a screwdriver in a junk pile. He used it to disassemble his mother’s sofa recliner in the time it took her to take a shower. He removed every screw, hinge and spring and spread them across the floor.

“He would always be on excursions,” Jamie Farnsworth said.

At 6, he started a fire at his grandparent’s house when he put a remote control wire antennae into a wall socket. The blaze blackened a wall.

He blew up bottles and made root beer. Twice, he tried raising fish. A hose came loose on his first attempt and syphoned all 55 gallons of water onto the floor. On the second, a 45-gallon trash can full of sea water tipped over.

“He’s a risk taker, and he’s not afraid to try something and not be right,” she said. “He’s OK with failure because then he can learn from it.”

At 13, Conrad put a bomb made of hydrochloric acid and aluminum foil into a garbage can, to see how long it took to react. After several minutes, nothing happened. He lifted the lid and —

“We had neighbors calling us to tell us that he’s blowing stuff up,” said his dad, Tom Farnsworth.

Conrad’s projects have matured as he has. His run-of-the-mill potato gun will soon be semi-automatic. He uses a HAM radio, makes 3-D models on his 3-D printer and wore an electric-glowing tie for homecoming.

His parents used to understand his projects. Now, their eyes glaze over as he talks about alpha particles, boron tin tubes and decaying tritium.

They don’t worry about him. He’s participated in all-state choir, plays the trombone, qualified for state in swimming and goes to church regularly.

“There were a lot of mishaps, but they brought him to where he is now,” Jamie Farnsworth said.

He stumbled onto the idea in seventh grade. Fusion sounded fascinating, and the father of fusion, Philo T. Farnsworth, shared his last name.

But he didn’t think nuclear fusion was for middle schoolers. At 13, he pigeonholed the project.

In ninth grade, he wanted to test the effects of microwave radiation on fruit flies. He failed badly, finishing dead last in the science fair. Each category’s top three projects automatically earned a trip to the state fair, and his category only had three projects entered.

But his was so bad, judges wouldn’t advance it.

The embarrassment reignited his fascination with fusion. He vowed to prove himself to the local science community.

Fusion is the smashing of nuclei. If harnessed, it has the potential for clean, incredible power. But, to date, no one has created fusion that produces more energy than it consumes.

Fusion doesn’t require uranium or produce radioactive byproducts like fission does, and it’s legal for a teenager to make in his dad’s garage.

Members of the international amateur fusion community helped direct Conrad. They answered questions and lent him parts. In return, he’s mailed parts to other budding amateurs.

A Youtube video he filmed at 10:45 p.m. Dec. 1, 2011, documented the moment he became a teenage fusioneer. He’s in his bathrobe and sounds just a little delirious after several late nights. He explains his accomplishment and shows a machine’s reading proving it worked. Even if he hadn’t shown the evidence, a commenter posted on the video, Conrad’s enthusiasm was proof enough.

He was 17 and it was just days before the science fair. The fusion reactor took first at regionals and at state. He later went to Maryland and San Diego as part of the Junior Science and Humanities Symposium. The fruit fly debacle became a distant memory.

His machine will likely never be used for energy production. It’s too inefficient. It could, however, be used to produce cancer-fighting isotopes, he said. He wants to work in fusion because he believes it can, and will, be the answer to the world’s energy, healthcare, humanitarian and climate problems.

His dad tells him not to forget his roots. Tom Farnsworth made his money in oil. That money bought the shed where Conrad built his reactor and paid for the tools he used to make its parts.

“All I tell him is that if he invents something that does away with fossil fuels, it will be on him to take care of his mom and I,” Tom Farnsworth said.

Conrad’s heard it before. He laughs and keeps working.

He’s learning to operate on a safety-first basis. He wears safety goggles and says things like “no dose is a safe dose.” But accidents still happen.

At 2 a.m. several weeks ago, he brushed up against the wrong part. One thousand volts shot down his right side.

“It nearly knocked me on my hiney.”

He’s still working to make the machine more efficient, if it doesn’t kill him first.

With our home & garden newsletter!

How to get rid of fruit flies

It's time to ban this annoying summer pest.

Board member seeks approval for change in documentation

Q: I am on the board of a condo association and it was brought to our attention by a past owner who was selling his unit that a potential buyer noticed that the par value noted in the governing documents of our association did not match that in the multiple listing services in our local tax assessor’s tax base.

How to best help parents struggling with loan payments

Q: My parents owe about $500,000 on a mortgage and home equity loan for a property that’s worth around $900,000. They want to stay in the home, as they are elderly and don’t want to go through the process of moving. They are also, however, in default (COVID-19 protected for now) of their mortgage as they cannot afford the mortgage payments.

Build a board and batten fence

The board and batten fence in our townhouse community conceals a large dumpster used by the homeowners, while creating an attractive screen in the landscape by disguising the ugly container. Surrounding a home this type of fence creates privacy from neighbors along a property line or as a patio barrier in close quarters.

Conrad Farnsworth of Newcastle built an inertial electrostatic confinement fusion reactor in his garage. The glow comes from 600 million degree plasma at the heart of the nuclear fusion reactor.

Conrad Farnsworth shows off the fusion reactor he built in a shed.

Conrad Farnsworth, 18, is the only person in Wyoming to achieve nuclear fusion and one of only about 15 people in the world to do it who are still in high school.