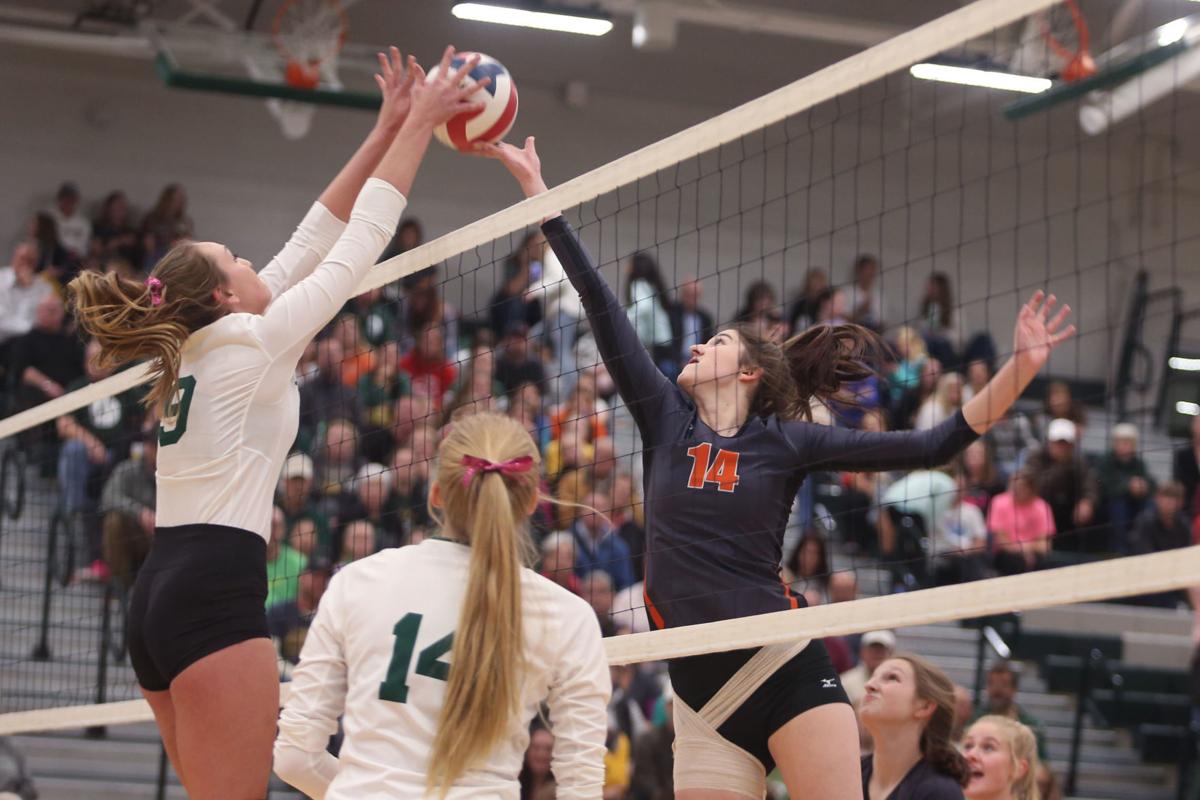 Kelly Walsh's Corin Carruth, left, blocks a tip attempt by Natrona County's Kate Robertson during their VolleyBowl match Oct. 22, 2019, at Kelly Walsh High School in Casper. Carruth is a freshman outside hitter for the University of Wyoming this year. 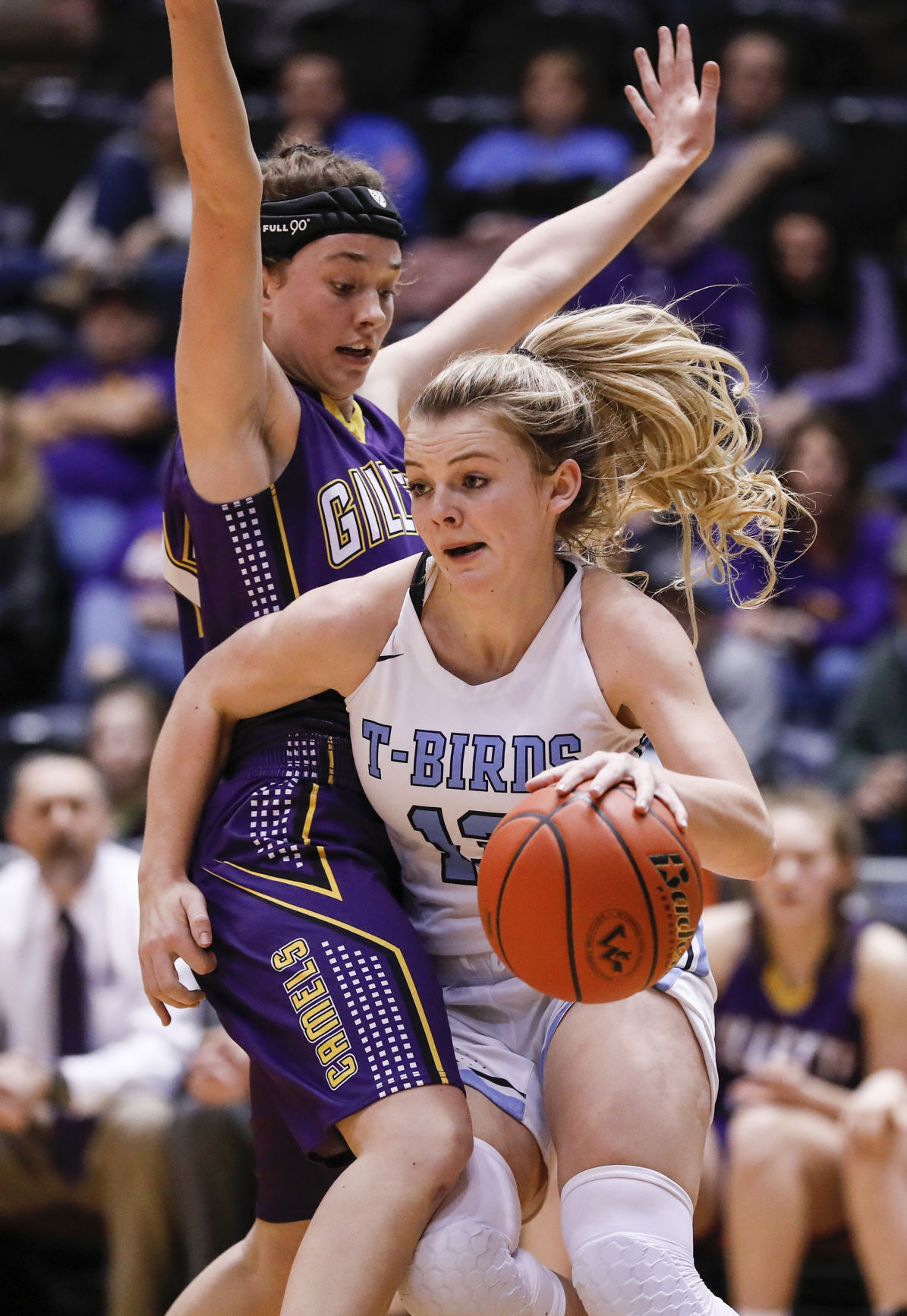 ALYSSA BEDARD, ROCK SPRINGS: She was a four-time all-state selection in indoor track and a three-time honoree in soccer.

After finishing second in the 55-meter dash at the state indoor meet as a sophomore, Bedard won six individual gold medals (55- and 200-meter dash, 55-meter hurdles) and two more as part of the Tigers’ 4x200 relay team her last two seasons.

She also had top-10 finishes at the Simplot Games and holds seven school indoor track records.

Bedard was just as impressive on the pitch. In three years she amassed 86 goals and 36 assists — both of which are school records — and helped lead the Tigers to a third-place finish at last year’s state tournament.

Bedard, who was recently named the Rock Springs Female Athlete of the Year, will play soccer at the University of Wyoming in the fall.

KY BUELL, CHEYENNE EAST: She was an all-state volleyball player her senior season with the Thunderbirds, but it was in basketball where Buell was at the top of her game.

She played her first two years at Rock Springs, where she led Class 4A in scoring both years, averaging 15.6 points per game as a freshman and 21.0 as a sophomore. At East, Buell averaged a team-best 16.3 points per game as a junior and once again led the state in scoring with 21.3 ppg this past season. She also led her team in assists and steals all four years.

A four-time all-state selection in basketball, Buell helped East to a runner-up finish last year and a 22-3 mark this season before the state tournament was canceled because of the coronavirus pandemic.

Carruth earned three all-conference and two all-state honors in volleyball and was the 4A Player of the Year as a junior.

In basketball, she averaged 9.1 points and 7.5 rebounds as a senior, garnering all-state honors for a Kelly Walsh squad that entered the state tournament as the West Regional champs with a 17-5 record.

Carruth will play volleyball at UW next year.

OLIVIA MCPHERSON, LARAMIE: While she only competed in swimming during her four years of high school, McPherson definitely left a legacy in the pool.

At the state meet, where she helped the Plainsmen win three consecutive state team titles, she won the 50 free all four years and the 100 breast as a senior. She also swam on six state championship relay teams.

McPherson will continue her swimming career at the University of South Carolina.

NAYA SHIME, KELLY WALSH: After spending her first three years at Riverton, she finished her prep career as a Trojan.

Shime was a three-time all-state selection in volleyball at Riverton, where she also was a two-year starter for the basketball team and won four state titles in track.

She won the state long jump title her first two years, setting the Class 3A mark with a leap of 18 feet, 8.75 inches as a sophomore. She also won the 100-meter hurdles as a sophomore and junior.

Shime will join Carruth in playing volleyball at UW.

There are more than 3,000 active confirmed coronavirus cases in the state for the first time. There were just over 1,000 at the start of the month.

It's unclear how many cases are currently active in the nursing home, but the state has not marked the facility "resolved," meaning follow-up testing is still being done.

The state of Wyoming has added more than 3,000 total COVID-19 cases over a 10-day span for the first time.

There have now been more than 10,000 confirmed COVID-19 cases in Wyoming since the pandemic began.

With today's increase, there are more than 4,000 active total cases in Wyoming for the first time.

The district could lose nearly $32 million under an early proposal from state legislators. That would mean between 331 and 384 eliminated positions.

Several Wyoming cities recorded record lows on Sunday, and Monday was forecast to be even colder.

Stuff the train on Halloween

This is a story of redemption and giving back. It’s the story of a boy’s love of trains and how that manifested, as a profession and a hobby. …

The district could lose nearly $32 million under an early proposal from state legislators. That would mean between 331 and 384 eliminated positions.

Kelly Walsh's Corin Carruth, left, blocks a tip attempt by Natrona County's Kate Robertson during their VolleyBowl match Oct. 22, 2019, at Kelly Walsh High School in Casper. Carruth is a freshman outside hitter for the University of Wyoming this year.