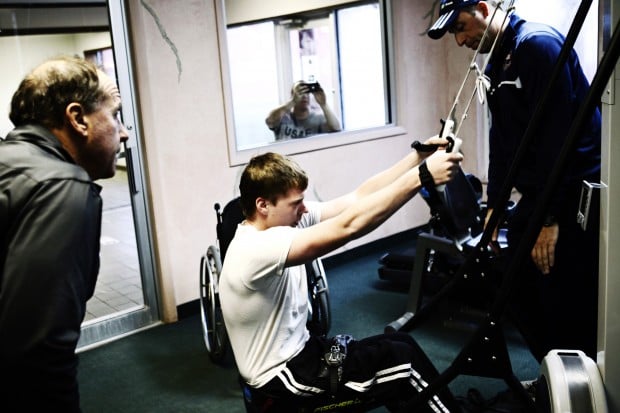 Casper resident Taylor Weber, 20, warms up on an exercise machine as assistant coach Marc Mast, left, and head coach James Upham, right, watch at Parkway Plaza in Casper on Nov. 16. Weber, whose spinal cord was crushed during a car accident two years ago, was training with the U.S. Paralympic Team during a week-long biathalon camp. 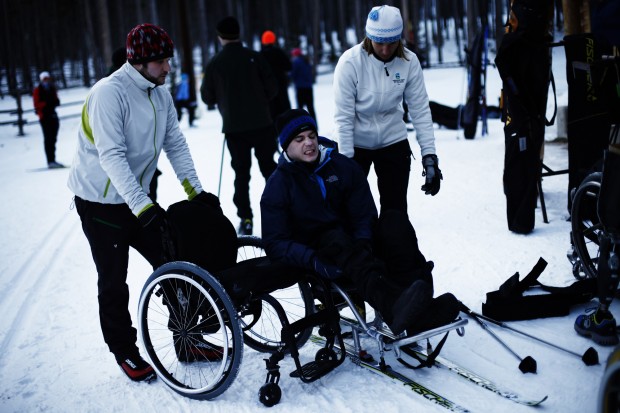 Weber pulls his legs into a set of sit-skis before heading out to train on the Nordic trail at Casper Mountain. Weber’s spinal cord was crushed during a car accident two years ago. 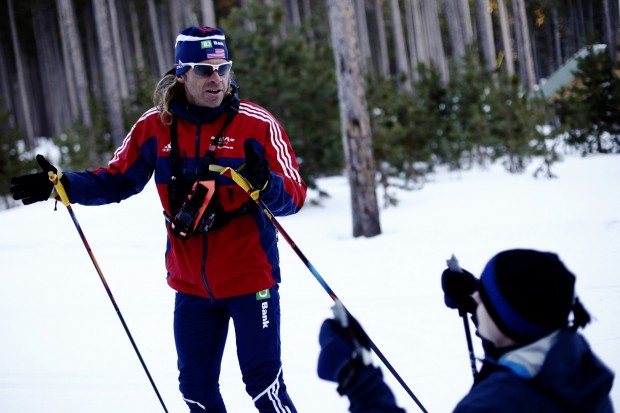 Head coach Rob Rosser, left, gives Weber some pointers for pulling himself up the incline at the Casper Mountain Nordic Trail in Casper. 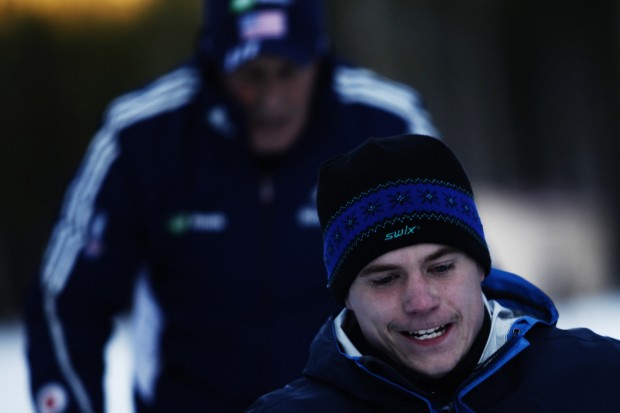 Taylor grimaces as he pulls himself up a slight incline with coaching assistant Marc Mast following behind, offering words of encouragement Nov. 16, 2011 at Casper Mountain.

Taylor Weber lies belly-down on the carpet of the Parkway Plaza Hotel, aiming an electronic rifle across a nearly empty hallway.

He props himself on his elbows and steadies the weapon. His target is 10 meters away — a gray box with five bull’s-eyes, each about the size of a golf ball.

There’s no shot when he pulls the trigger. Instead, a robotic voice with a Finnish accent speaks from a laptop to Weber’s right.

Weber’s empty wheelchair sits several feet away. Behind it, a small group of athletes kill time by checking cell phones and chatting with one another.

They’re here in Casper for the U.S. Paralympic Nordic Biathlon training camp. For a week, the competitors will race in time trials, hone their shooting skills and build endurance on ski trails. Some are already members of the national team, with years of experience. Weber, a 20-year-old college student living in Mills, has little more than a week’s worth of training.

Before the accident, he played football and basketball at his school in Midwest. Biathlon is nothing like those sports. It blends the aerobic demands of cross-country skiing with the precision of riflery.

The sport offers Weber something he didn’t find during his recovery: A chance to compete again.

“Rehab was learning how to operate in life again,” he says. “Here, you are trying to do more than just get by.”

A 2009 car accident killed Weber’s mother and crushed his spinal cord. He woke from a coma to discover he was paralyzed from the waist down.

Rehab in a Craig, Colo., hospital taught him how to function in a wheelchair. But afterward, Weber did little to exercise.

A friend suggested he call Rob Rosser, an Olympian and Iraq War veteran who trains athletes for the national Paralympic biathlon team. Rosser, who lives on Casper Mountain, visited Weber at his home in Mills and encouraged him to try the sport.

“They’ve undergone a terrible experience and they see their world and options may be diminished,” he explains. “Maybe seeing this out there ... hopefully it gives him a ray of light, saying, ‘Well, if this is there, what else is there?’”

Weber spent a week last winter training with the team. It wasn’t easy. He felt out of place when he arrived, wearing a Carhartt jacket instead of the ski gear worn by other biathletes.

Skiing also proved difficult. Paralympic athletes use sit-skis — basically a seat attached to a set of cross country skis — for the Nordic portion of their sport. Weber borrowed a heavy ski that barely moved with each push of his poles.

The experience didn’t exactly set his world on fire. When the camp ended, so did his focus on the sport.

Rosser called Weber this summer and encouraged him to give biathlon another try. Weber seemed reluctant at first. College remained his top priority.

But on the first day of training camp, Weber arrived early.

“He has been 10 minutes early to each event,” Rosser says. “That’s sometimes rare for some of our adult athletes. Those things show me a lot.”

After the shooting drill, Weber wheels into the Parkway gym, where coaches have set up a “SkiErg” — a treadmill-like device for cross-country skiers.

Cords attached to the machine allow athletes to mimic the pole movements of Nordic skiing. The SkiErg also measures power and endurance.

Weber waits as two more experienced athletes take their turn on the machine. Both are military veterans. One broke his back in a helicopter training accident. Another lost his lower legs after he stepped on a mine in Afghanistan.

Weber doesn’t dwell much on his own injury.

“I just woke up this way, and ‘All right, you have to deal with it,’” he says. “I don’t really compare it to my life before I was paralyzed.”

When it’s Weber’s turn, a coach runs him through a series of 30-second intervals on the SkiErg. The former quarterback pulls down on the cords and exhales as he lunges forward. Muscles flex in his arms and back. Strain shows on his face.

When it’s over, he smiles and shakes the soreness from his arms. He remains unsure about biathlon. But he wants to show he’s up to the task.

“There [were] a lot of people watching me, and I was kind of nervous before about not even finishing,” he says. “I don’t know...kind of had something to prove.”

Weber made sure he didn’t repeat his Carhartt mistake. Before this year’s camp, he spent hundreds on workout gear.

He’s wearing the new clothes when he arrives at the Casper Nordic Center for the next day’s training.

“I look weird enough,” he jokes. “I got to look good on the outside.”

Most competitors spent the morning in a time trial. Weber, who’s studying to become a teacher, had to attend classes.

He waits quietly as the coaches prepare his sit-ski. Elite biathletes have customized sit-skis. Since Weber is starting out, he’s borrowing one. It doesn’t exactly fit his body, so the coaches attach pads to the seat with duct tape.

Balancing isn’t all that difficult. Developing the endurance to propel the ski presents a bigger challenge, says Cathy Nyrkkanen, an assistant coach for the team. That’s especially the case for athletes with spinal cord injuries, who must build muscle in their weakened core.

“It just takes time to gain it back,” she says.

Once he’s secure, Weber maneuvers to a trail behind the Nordic center. The other athletes glide into their workouts.

Taylor is last to begin. He looks nervous, and at first, struggles to keep his momentum. The second lap is mostly uphill, and it shows on Weber’s face. He works for every foot.

Rosser skis alongside, offering advice. Concentrate on technique. Develop good habits now to break bad ones later. The light begins to fade and the trail, which had been full of high school skiers, starts to thin out. Rosser wants a few more laps from his athlete.

They train as the sun sets and the wind picks up. Rosser’s suggestions appear to be working. Weber glides along a little easier than before. There’s more confidence in his movements; less strain to keep the ski moving along.

“Better,” the coach says. “Much better.”

Finally, the workout is over. Weber is drained. His arms fail him for a moment when he maneuvers his wheelchair back into the lodge.

Burning muscles aside, he’s happy with his performance. “I feel more confident this time around,” he says. “I feel like I was actually progressing.”

He still hasn’t decided whether he’ll commit to becoming a Paralympic athlete. But for now, he’ll keep training.

“Today, I’m feeling a lot more into it,” he says. “It depends on the day. Today, I felt great. I wanted to get out there.”

Sean Halsted is breathing heavily when he rolls onto the ground and reaches for his weapon.

Casper resident Taylor Weber, 20, warms up on an exercise machine as assistant coach Marc Mast, left, and head coach James Upham, right, watch at Parkway Plaza in Casper on Nov. 16. Weber, whose spinal cord was crushed during a car accident two years ago, was training with the U.S. Paralympic Team during a week-long biathalon camp.

Weber pulls his legs into a set of sit-skis before heading out to train on the Nordic trail at Casper Mountain. Weber’s spinal cord was crushed during a car accident two years ago.

Head coach Rob Rosser, left, gives Weber some pointers for pulling himself up the incline at the Casper Mountain Nordic Trail in Casper.

Taylor grimaces as he pulls himself up a slight incline with coaching assistant Marc Mast following behind, offering words of encouragement Nov. 16, 2011 at Casper Mountain.