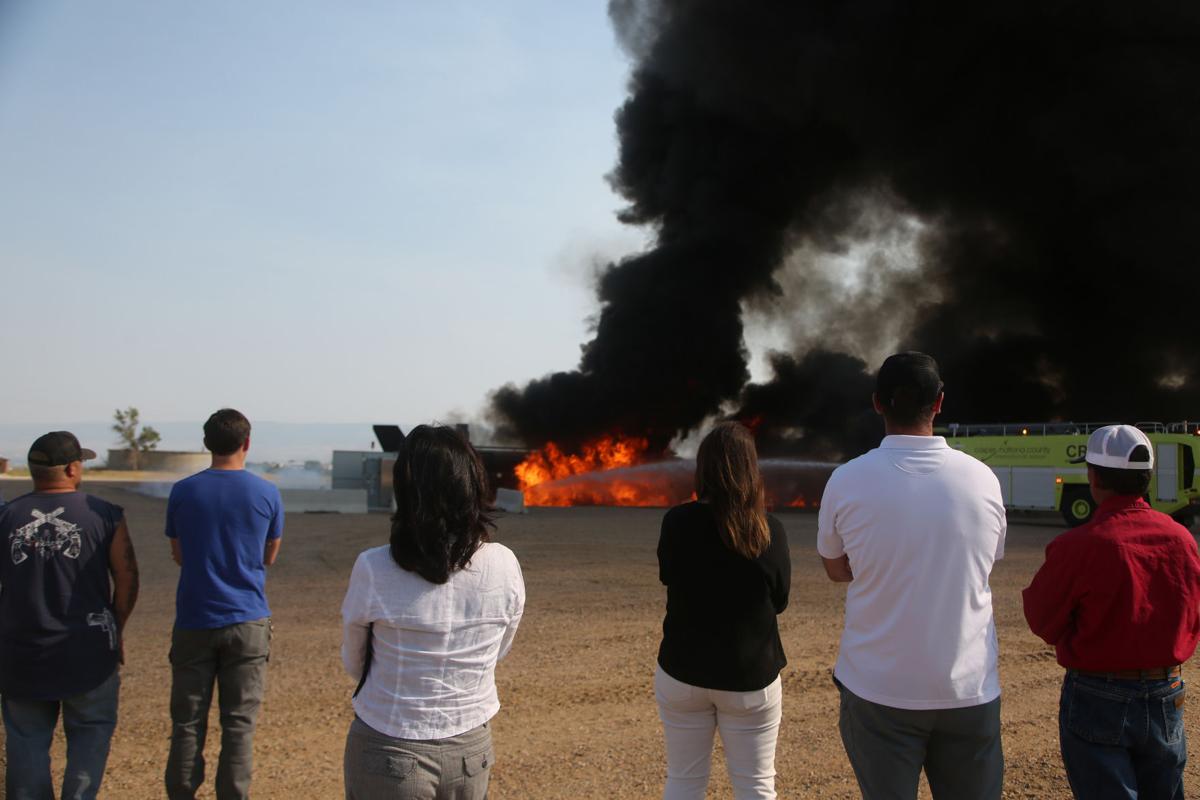 Members of the public gather at the opening of a new aircraft rescue fire fighting training facility Wednesday at the Casper/Natrona County International Airport. The facility will train firefighters from around the region. 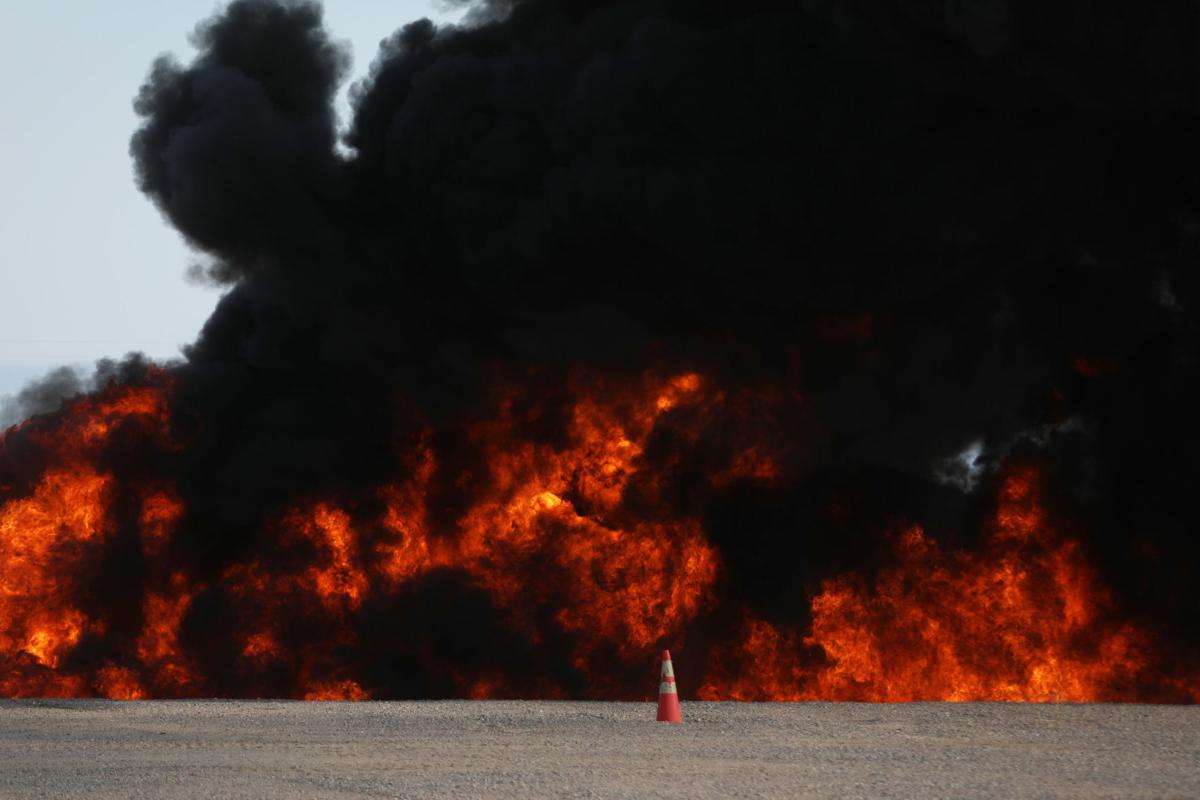 On Wednesday afternoon, a blaze ignited on Commerce Drive, pumping thick black smoke up into the otherwise clear sky.

About two minutes later, thanks to a 3,000-gallon bright green fire engine, the flames were out.

At the new Aircraft Rescue Fire Fighting training facility at the Casper/Natrona County International Airport, these fires can (safely) start and be put out several times a day.

The facility was unveiled on Wednesday, in a presentation and ribbon-burning attended by airport staff, local and state elected officials and airport and transportation leadership.

When those people come to Casper to train, airport board president Joe MacGuire said, the whole area benefits from hosting them and their money.

“It’s certainly good for Wyoming, because some of these gentlemen — usually gentlemen — they come in on their own per diem, so they’re staying in hotels, they’re eating. They’re here for a 40-hour course,” MacGuire said. “So it’s a good economic driver for our city.”

The new training facility, which is bigger and operates on modernized technology, will likely draw even more use than that. An ARFF facility in Salt Lake City recently closed, and new restrictions on one in Denver mean more people from the Mountain West (and beyond) are looking to Casper as their best option for training.

So when the rubber liner under the original facility started to deteriorate a few years ago, the airport decided that rather than shut it down or limit its use, it would reconstruct a new one.

The new facility, which began construction in 2020, has been used for training since May 7. It includes a metal mock aircraft in a large pit, which is filled with water then topped with diesel that’s lit on fire for training. The water keeps fire from catching outside the controlled area, and is separated from the fuel after fires are put out so the diesel can be reused.

Airport maintenance worker Cooper Baalhorn said the new facility’s aircraft is longer than the old one, has two wings instead of one and has a more sophisticated deluge system to cover the metal with water before burns.

A new 3,000-gallon fire engine — which holds twice the water as the old one and cost over $1 million — has also been in use for about a month. Baalhorn said the new engine has a 50-foot boom arm for water, and can poke through the fuselage to spray inside a plane if needed. Fully loaded, the vehicle weighs 90,000 pounds.

In an existing brick tower looking over the burn pit, an outdated control board with manual knobs and switches has been replaced by a huge touchscreen that shows burn points, monitors temperatures in the pit and tracks things like fuel usage.

Most training consists of the metal structure being ignited in the burn pit, then being put out by crews in a fire engine. But the facility can also be used to train people to fight fires inside aircraft, using hand lines.

Demand for Casper’s training grounds is already high among agencies looking for a place to train for the unlikely event of an aircraft fire. MacGuire said the airport recently fielded a request from Bellingham, Washington, and regularly hosts classes from Colorado, Nebraska and all parts of Wyoming.

In all, the updated facility costs around $9 million. Most of that — around $8.7 million — came from a national grant under the FAA’s Airport Improvement Program, which redistributes fuel tax for projects like this one. The rest came from the state and out of the airport’s own pockets.

“If you’re somebody that flies in and out of here, you want the safest airport,” Barrasso said. “The fact that the training facility is here makes our airport the safest to come in and out of.”

Darren Thunehorst was last seen at the end of August at his former address on A Street in Casper.

Truck drives into North Platte in Casper, driver in hospital with injuries

A driver was taken to Wyoming Medical Center with serious injuries after driving into the North Platte River on Friday.

Casper Notebook: Out of town and out of office

An exhibit featuring paintings by the founder of Casper Mountain's Midsummer's Eve festival are about to go on display.

Due to a production delay, the Casper Star-Tribune will experience late delivery. There will be an extended carrier deadline of 10 a.m.

"At the risk of sounding alarmist, we need the community to understand that, depending on the situation, it’s possible that whole classrooms, grade levels, or even entire schools and daycare facilities could be shut down for weeks at a time,” a health department spokeswoman said.

Local film on Shoshoni actress to premiere Saturday in Casper

A locally produced film exploring the life of Shoshoni native and golden age actress Isabel Jewell will premiere on the big screen Saturday in Casper.

Black bear killed on highway near Bessemer Bend on Monday

It's rare for drivers to encounter black bears on highways in the Casper area, let alone hit them.

The fatal collision occurred after 4 p.m. Tuesday, near the intersection of North McKinley Street and East F Street in Casper.

Members of the public gather at the opening of a new aircraft rescue fire fighting training facility Wednesday at the Casper/Natrona County International Airport. The facility will train firefighters from around the region.