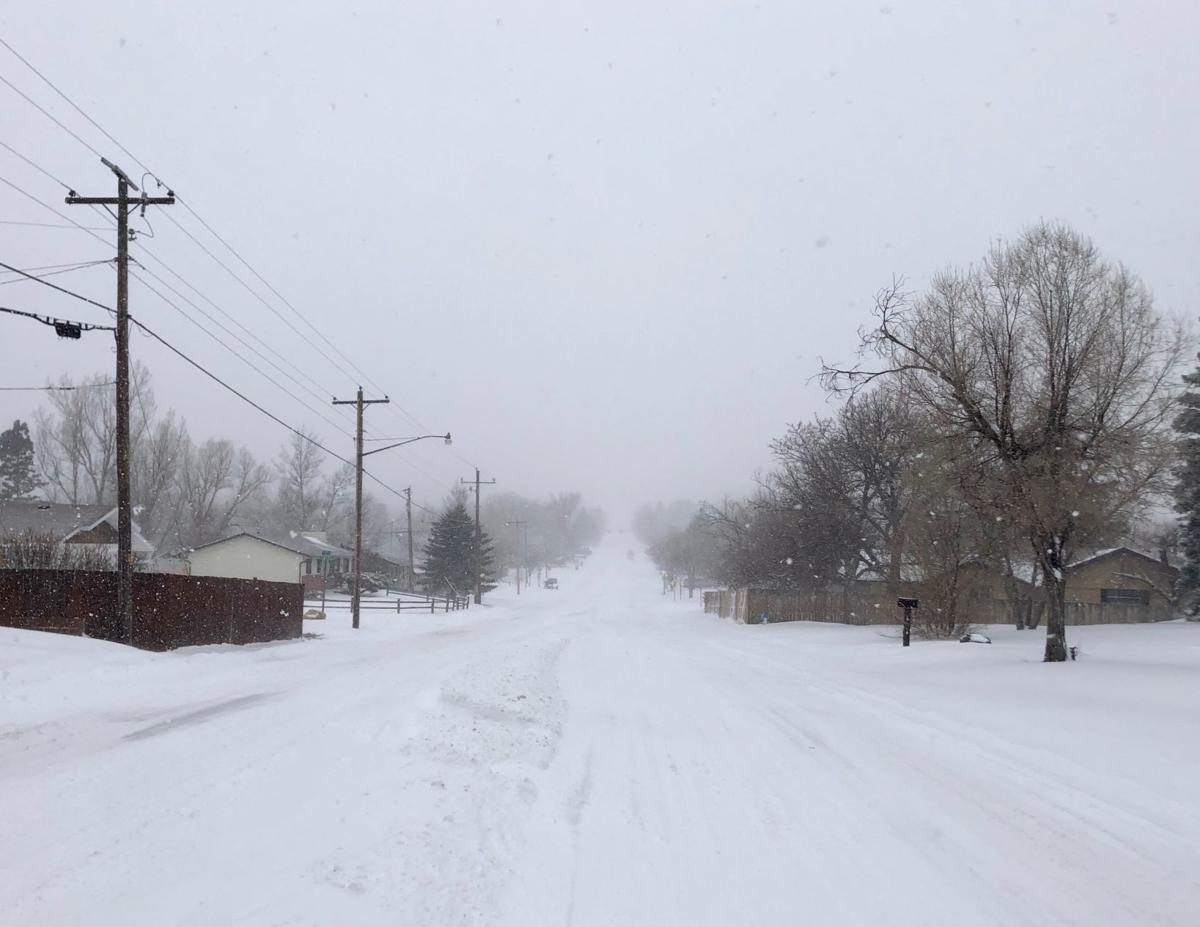 Snow falls on a deserted 12th Street in Casper on Monday. Much of the city shut down after a storm brought blizzard conditions to central Wyoming. 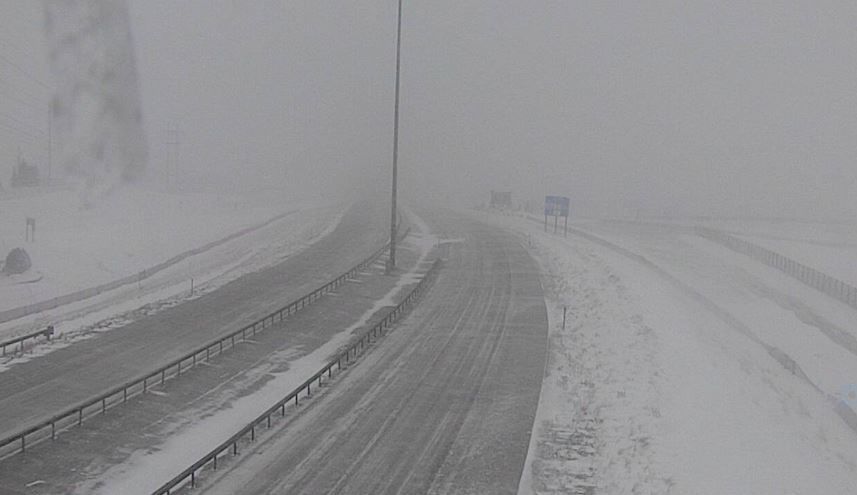 A powerful winter storm has closed all routes out of Casper. 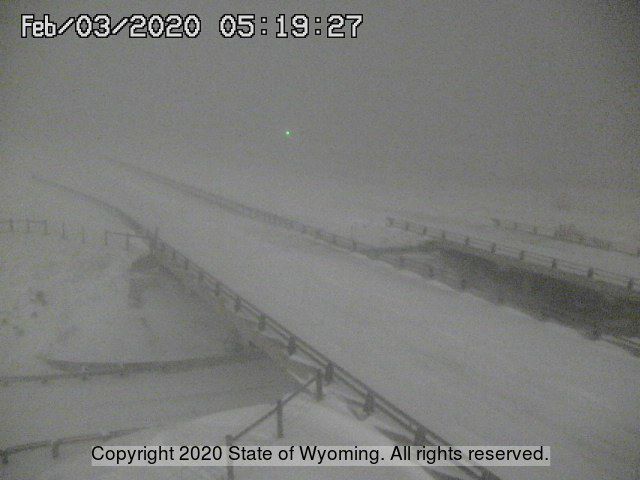 Hazardous conditions on Interstate 25 are shown Monday morning in this photo from the Wyoming Department of Transportation.

A blizzard dropped more than a foot of snow on the Casper area Monday, shuttering schools, closing highways and — for the first time in over a dozen years — the local airport.

The powerful winter storm swept through the region beginning late Sunday evening, combining heavy snow with gusty conditions. The snow, which was expected to continue falling throughout Monday and into early Tuesday morning, closed all highways in and out of Casper on Monday.

As of noon Monday, 12.9 inches of snow had fallen at Casper/Natrona County International Airport, according to the National Weather Service. Unanticipated ice caused the airport to close for the first time in more than a decade, according to airport director Glenn Januska.

The ice “bonded to the pavement and we have not been able to get the runways to a condition to allow flights, plus the visibility has been poor with blowing snow, etc.,” Januska wrote in an email late Monday morning. He said the airport had never before closed in his tenure of 13-plus years.

Dozens of government and agencies closed around the region, including colleges, schools and even city governments. A host of businesses also shuttered for the day, leaving the streets eerily quiet at times.

Garbage collection services will resume on a delayed schedule Tuesday, the city of Casper announced. Each day’s route will be collected one day late. The city asked residents to put their trash bins in the street near the curb, not on the sidewalk.

The severity of the storm came down to, in part, the amount of moisture in the air, according to National Weather Service meteorologist Chris Hattings. Hattings said moisture moving through the area, combined with cold temperatures, created conditions ripe for increased snowfall. Hattings attributed the wind to a high-pressure gradient, which he called the “atmosphere trying to equalize itself.” The higher the pressure difference, the stronger the wind, he said.

While it’s too early to say for sure, Hattings didn’t predict the storm would break any records. The largest snowfall recorded in the region was just before Christmas in 1982 and dropped 31.3 inches on Casper. So far the storm hasn’t surpassed last year’s record snowfall, either. There were two record storms last year: 14.7 inches fell in Casper in February and then again in March.

The coldest, snowiest and windiest towns in Wyoming

As for what the rest of the week holds, Hattings said the snow should stop by Tuesday, but the cold temperatures will likely remain. The wind may pick up again by Thursday, however, and another storm may be on the horizon Thursday night, though Hatting said it was too early Monday to say with any certainty.

Interstate 25 closed from Buffalo down to Douglas early Monday, and the Natrona County School District canceled all classes, as did Casper college.

City of Casper offices closed for the day, and the Casper Police Department declared a “snow day,” meaning officers were not responding to minor wrecks as they focused on serious crashes. Drivers involved in minor crashes were encouraged to exchange information and find a time to meet at the Casper Police Department later this week to file a report.

No major injury crashes were reported Monday to Casper police, a department spokeswoman said. Police did respond to a few crashes where property was damaged and also assisted some stranded motorists.

While most of the closures were confined to central Wyoming, hazardous driving conditions were reported throughout the state. Interstate 80 was also closed Monday between Rock Springs and Laramie.

The blizzard followed a winter storm warning from the National Weather Service in Riverton for much of the state.

Preliminary snowfall numbers released Monday morning by the National Weather Service in Riverton already counted a foot of snow in Buffalo, 11 inches in Lander, seven inches in Riverton, and six inches in Pinedale and Thermopolis. Smaller amounts were measured in the Bighorn Basin and in southwest Wyoming.

Get ready to enjoy the ride

Watch out for the big guys

Use extra caution on hills

Stuck? It's probably not that bad

Make the best of it

Here's a rundown of what was closed Monday in central Wyoming because of blizzard conditions:

All district activities have also been canceled for Monday.

Wind chills could plunge to minus 5 overnight in Casper

The icy temperatures are expected to continue, with the National Weather Service forecasting wind chills to dip as low as minus 20 overnight Tuesday.

Casper/Natrona County International Airport reported 15.2 inches of snowfall over the span of 24 hours, resulting in a snow depth of 12 inches, according to the National Weather Service in Riverton.

More snow, wind and below zero wind chills on the way

Forecasters say more snow could fall on Casper on Thursday, just as the city digs out from the last storm.

Snow falls on a deserted 12th Street in Casper on Monday. Much of the city shut down after a storm brought blizzard conditions to central Wyoming.

A powerful winter storm has closed all routes out of Casper.

Hazardous conditions on Interstate 25 are shown Monday morning in this photo from the Wyoming Department of Transportation.