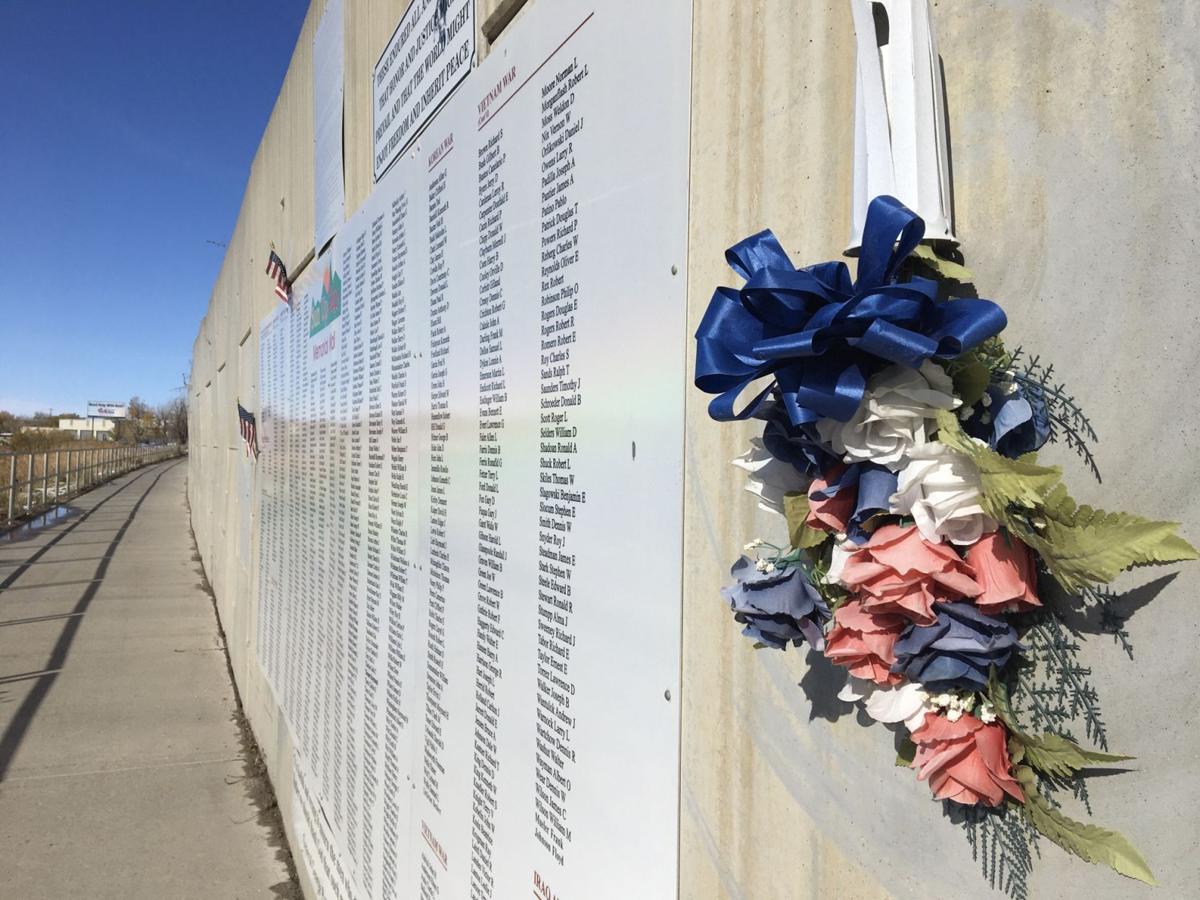 A bouquet of flowers hangs from the Sun Up Ridge Memorial Wall on the Platte River Trail. The memorial, which honors members of the military who died in the line of duty, was installed in 2006. 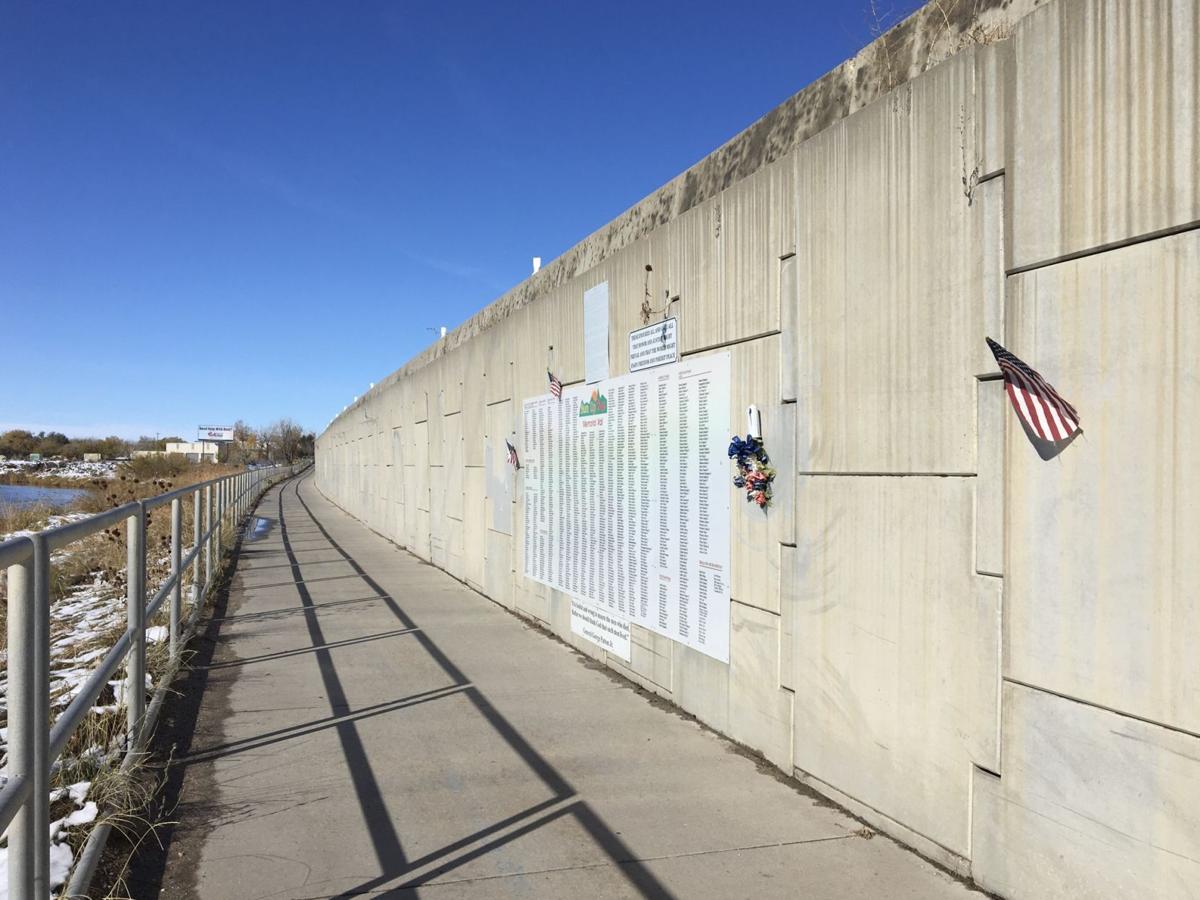 The Sun Up Ridge Memorial is a five-to-10 minute walk west from the Tate Pumphouse on the Platte River Trail. The memorial, which honors members of the military who died in the line of duty, was installed in 2006.

Dean Welch is a former post commander for the veterans’ organization American Legion, but he only learned of the Sun Up Ridge Memorial Wall a few years ago.

And that, he said, is exactly the problem.

The memorial wall, built into a retaining wall on the Platte River Trail in Casper, is over a decade old. Hundreds of people are honored there — from those lost in Iraq and Afghanistan all the way back to the Battle of the Platte Bridge Station in 1865.

But it’s just not easy enough to get to, Welch said. If you can make the trek, it’s a good five-to-10 minute walk west of the Tate Pumphouse. It’s also difficult to spot unless you’re close by.

So Welch and other Legion members are raising money to build a more visible, accessible version of the memorial at Patterson-Zonta Park.

The new monument will display the names of all Wyoming service members who died in combat, from the Spanish-American War to the present, Welch said.

Installed in 2006, the Sun Up Ridge Memorial Wall was the work of Korean War Veteran and Marine Leo Sanchez. The former Casper educator, who died in 2013, was known for his lifelong service to his fellow veterans.

At first, the American Legion considered just moving the original memorial somewhere more visible — perhaps closer to the Tate Pumphouse. But there wasn’t anywhere to put it, Welch explained.

So they approached the Casper Parks and Recreation Department about transferring it to a different part of the city.

After discussing a few different options, they settled on Patterson-Zonta Park.

“It’s highly visible, and there’s a parking lot right next to it,” Welch said.

The accessibility is a major plus, he added. Disabled people could visit the monument without having to leave their car.

The plan to move the memorial to Patterson-Zonta got the OK from Casper City Council in May.

Still, after a bit more research, the Legion discovered it’d be easier to build a whole new monument instead of relocating the original, Welch said. They got to work designing one.

What they settled on is fairly straightforward: Panels featuring the names of fallen service members will be framed under a large metal arch. The design draws inspiration from Veterans Park, he said.

Its use of negative space makes it more wind-resistant, and means it won’t obstruct the view of the Platte River, he added.

But bringing the project to fruition has anything but simple, Welch said.

“We were kind of hoping this would move a little faster than it is,” he said.

The American Legion has relied on help from several outside groups along the way, including Lower & Co Engineering, Casper College and Pacific Steel and Recycling.

Now, the challenge is raising enough money to build it, Welch said.

Materials aren’t cheap, he said, especially not right now — the estimated cost of the project is already up to $20,000.

American Legion members have pitched in about $1,000 so far, but are seeking public donations to cover the rest.

The Legion will be at upcoming community events to spread the word and raise money for the memorial. Donations can also be made online, or mailed into the group’s P.O. Box. More information on how to donate can be found at the legion’s Facebook page, facebook.com/casperlegion/.

Tree lighting, Christmas parade and ice skating set for this weekend in Casper

Casper will play host to a weekend of festivities to celebrate the holiday season, including the city's annual Christmas parade.

Natrona County's economy is recovering, but still playing catch-up after 2020

Natrona County lost about 3,900 jobs in the early months of the pandemic, according to the report. Since March and April of 2020, about 40% of those jobs have been recovered.

A bouquet of flowers hangs from the Sun Up Ridge Memorial Wall on the Platte River Trail. The memorial, which honors members of the military who died in the line of duty, was installed in 2006. 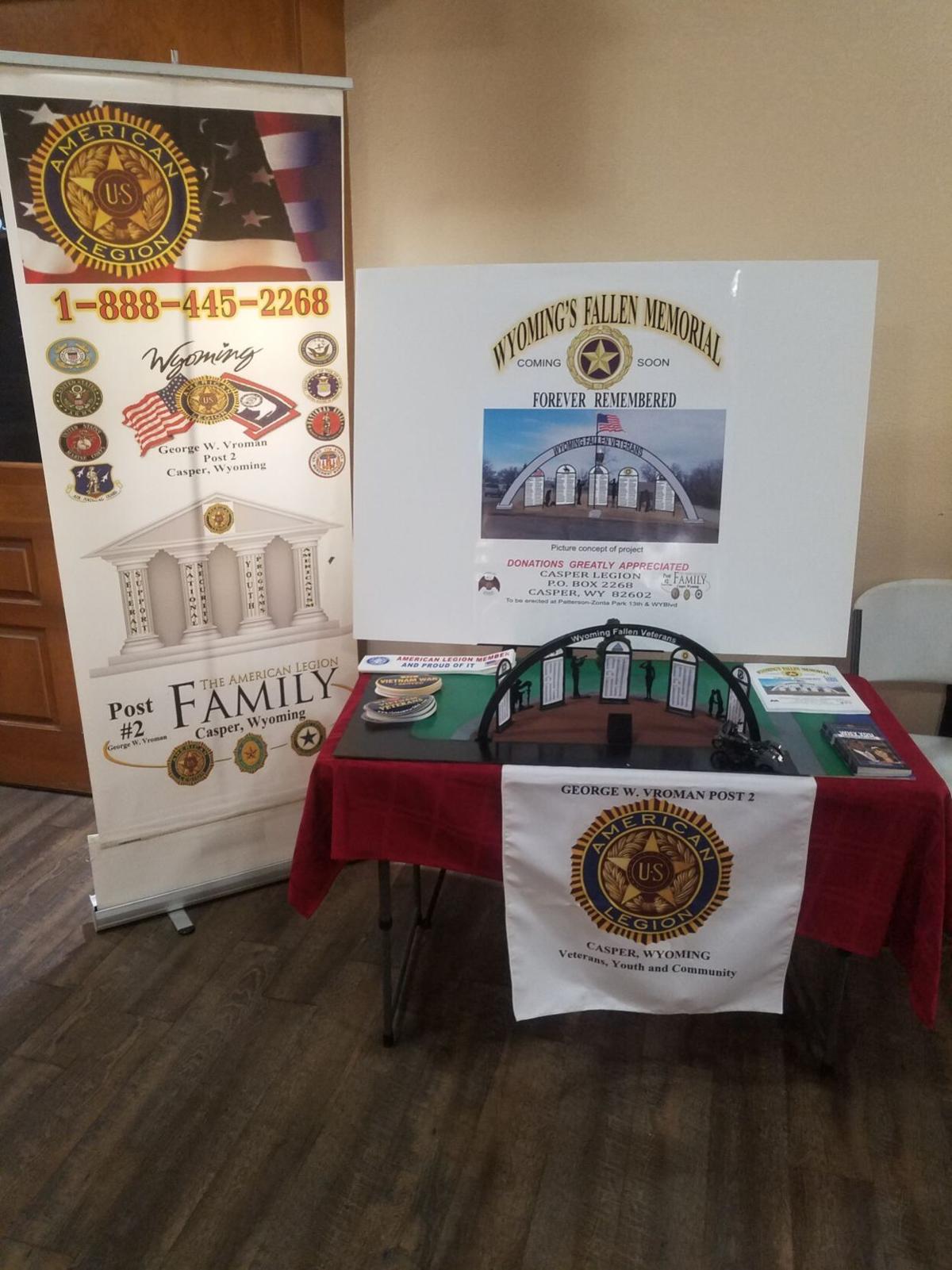 This diorama depicts a new veteran's memorial set to be installed at Patterson-Zonta Park. The American Legion is raising money for new monument, which will honor Wyomingites who died in the line of duty. 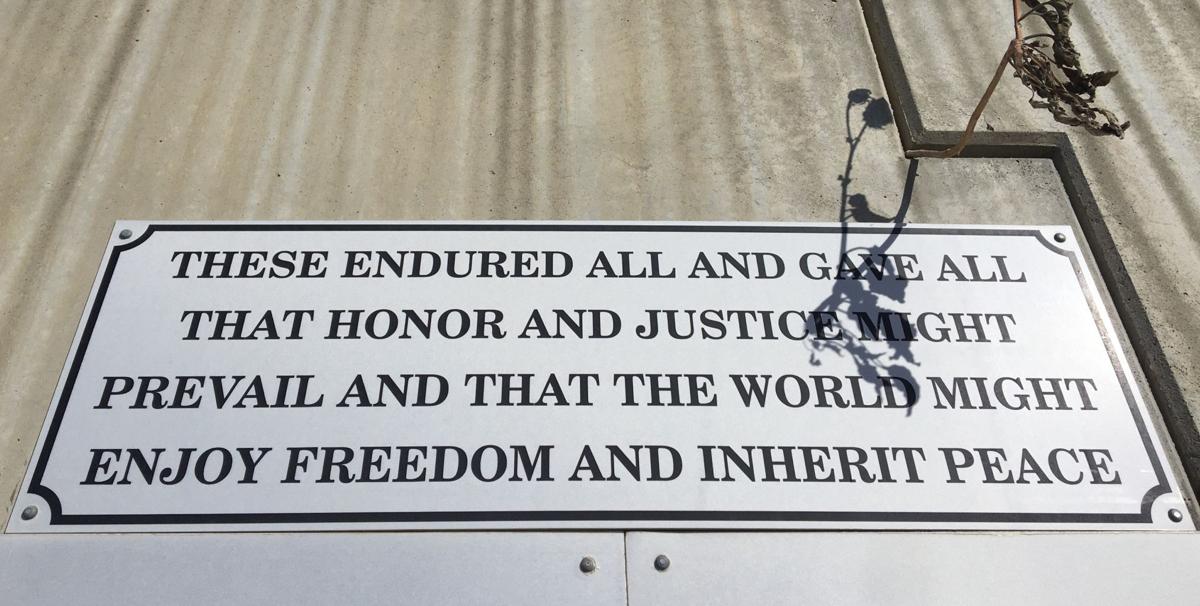 A plaque honoring veterans hangs over the Sun Up Ridge Memorial Wall on the Platte River Trail. The memorial, which honors members of the military who died in the line of duty, was installed in 2006.

The Sun Up Ridge Memorial is a five-to-10 minute walk west from the Tate Pumphouse on the Platte River Trail. The memorial, which honors members of the military who died in the line of duty, was installed in 2006.