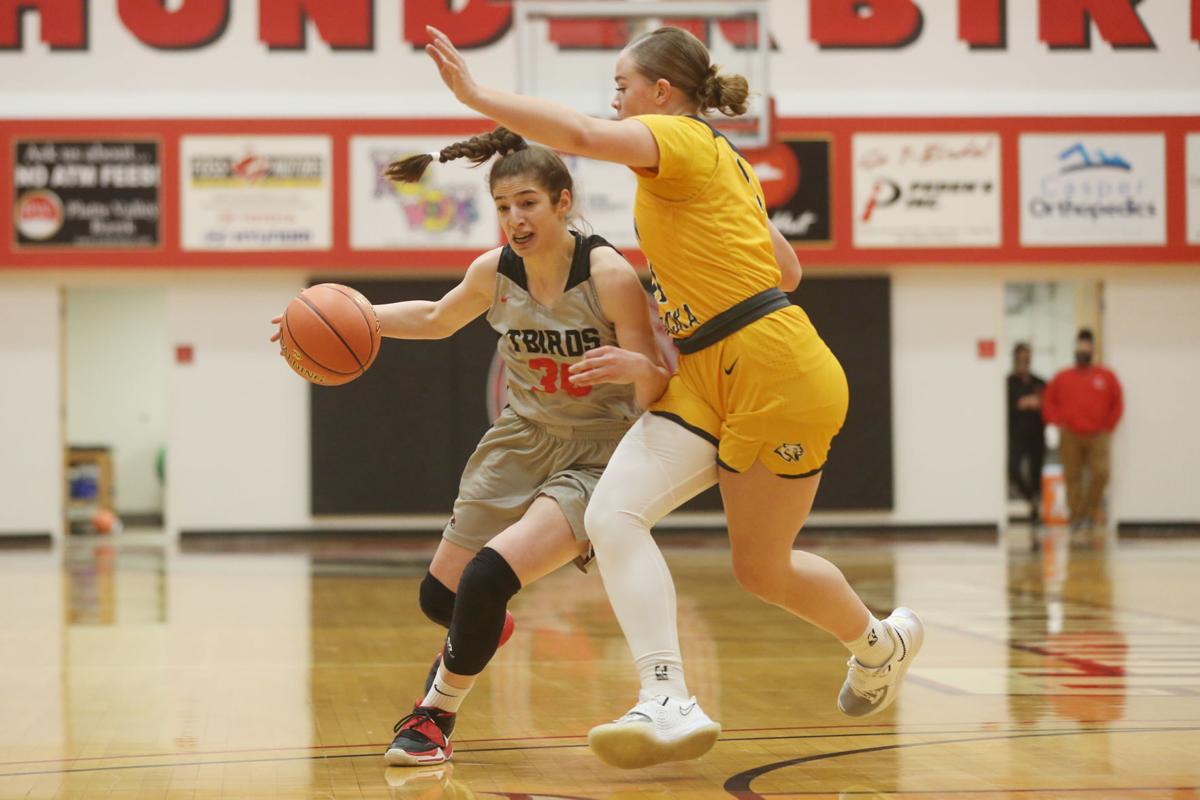 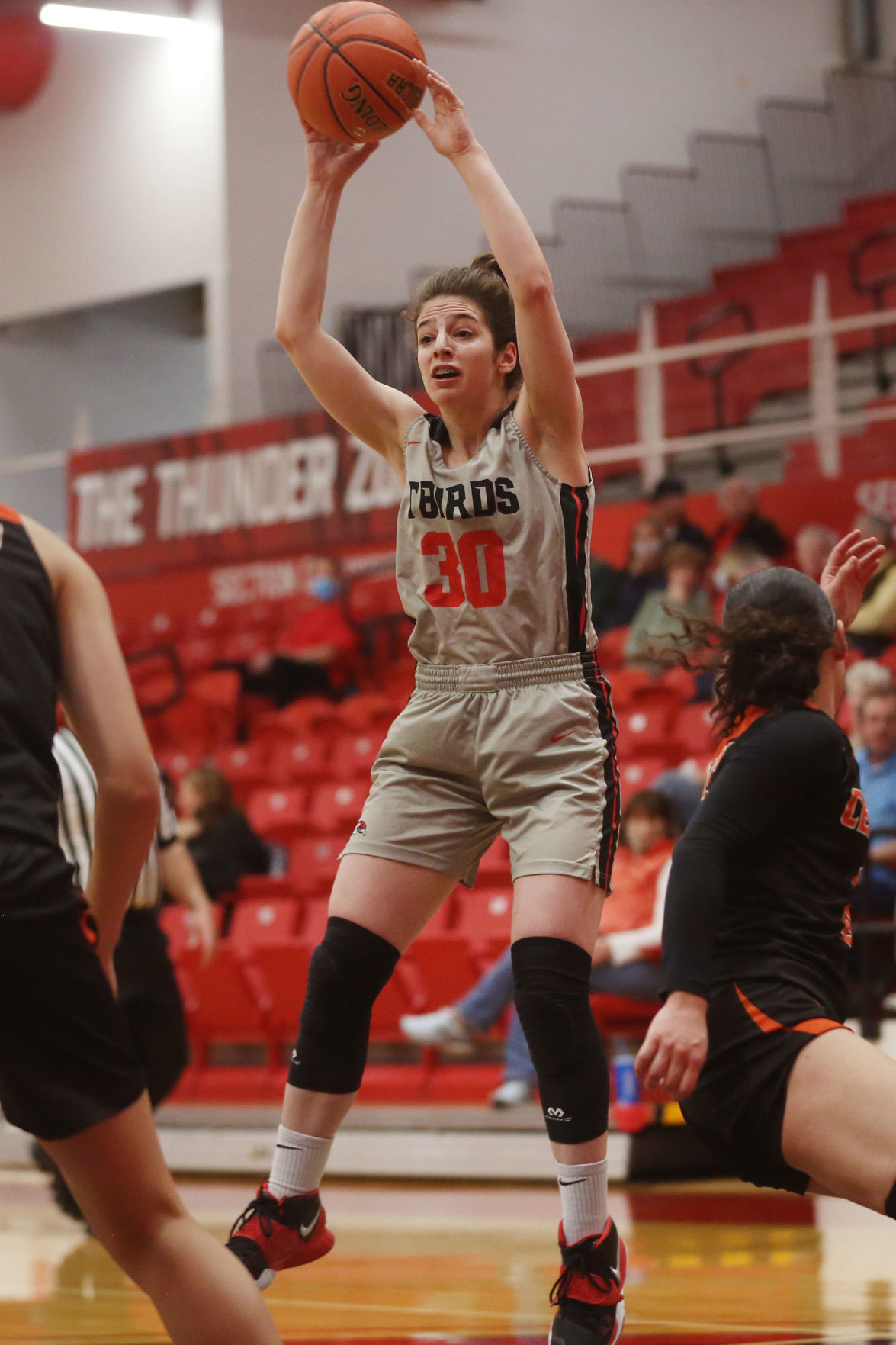 Casper Colllege's Natalia Otkhmezuri jumps to pass the ball to a teammate in the T-Birds' game against Central Wyoming College on March 24 at Swede Erickson Thunderbird Gym.

Rachelle Trujillo For the Star-Tribune

The 2020-21 season has been a near-perfect one for the Casper College women’s basketball team. After qualifying for the National Junior College Athletics Association Division I Championships last year but being robbed of the opportunity to compete as a result of the coronavirus pandemic, the No. 3 T-Birds are in Lubbock, Texas, to compete in this year’s NJCAA Championships. This time, they are even more determined to bring home the title.

Like everything else, this season has been a challenge. The Casper College basketball teams’ seasons started early this year with scrimmages in the case of another school closure and before games were officially allowed. As a result, the T-Birds have been on the court almost twice as much as in any other given year. The extra time paid off, though, as they were undefeated before an overtime loss to Otero Junior College in the Region IX championship game on April 10.

Natalia Otkhmezuri, a sophomore on the team, believes the T-Birds can use the loss as a learning opportunity. From her perspective, the team as a whole was willing to get the loss out of the way before nationals, and use it as motivation to not let it happen again.

“Our loss is painful,” Otkhmezuri said, “but we have lots to learn from it and have to trust each other and our coaches more than ever before.”

Otkhemzuri is one of the top 3-point shooters in the country – the 5-foot-8 guard is shooting 51.1% from behind the arc – and has had an impressive season and career at Casper College. Like many of the students comprising the college’s basketball, volleyball, and now soccer teams, Otkhmezuri is an exchange student.

Born and raised in Tbilisi, Georgia, she never had the opportunity to play basketball as much as she would have liked. Being a girl, she did not have the teams or opportunities to involve herself with as the boys did. Instead, she played with her brothers, and had a dad who served as a personal coach. She said Casper College has been an amazing opportunity for her to improve as a player and person while also being surrounded by strong, driven women.

“They give me motivation every day,” Otkhmezuri said. “They all work so hard, and do a lot on and off the court.”

It is no surprise then that this group of talented and determined players has been able to make school history at Casper College. The T-Birds had a school record 37-game winning streak dating back to last season and they were the first to go undefeated in the regular season.

Head coach Dwight Gunnare attributes their success to their ability to play off of one another’s strengths and balance each other out as a team.

“Recruiting is often a challenge because you never know how everyone’s talent is going to blend,” he said. “But this team’s chemistry is just good. We’re good at sharing the ball, and have great shooters and communicators. We’re definitely lucky.”

Gunnare and the players seem to know, however, that the luck of picking well-suited teammates only goes so far, and that it is the time and energy the team and coaches have put in that have really made the 2020-2021 season stand out.

“Some teams just can’t handle the grind,” Gunnare said. “This team can.”

SHARP SHOOTER: Otkhmezuri is third in the nation in 3-point shooting at 51.1% heading into the T-Birds' opening game at the NJCAA Championships on Tuesday.

Black Tooth Brewing Company announced as tenant in The Nolan

Black Tooth Brewing Company is set to move into the downtown Casper space by late 2021.

Casper Notebook: A book sale and a spring bloom

One of the only things on my calendar during the bleak, bleak month of February was an appointment for a bag sale at the library — and it was everything I dreamed of and more.

Gwendolyn Mary Doner, a 19-year-old Kelly Walsh High School alumna, was merging onto an interstate in Murray, Utah, on April 19 when a truck driver hit her car head-on going the wrong way.

Talkin' with Sal: Zooming to the regular

Shurmur writes: The big thing that happened this past week concerns our hallowed, cavernous hall of journalism.

There’s a new way to help neighbors in need around Wyoming this spring and it is as socially distant as it comes. Gardeners are invited to “gr…

Mustang has state's fastest times in both the 110- and 300-meter hurdles.

The Star-Tribune earned six awards in the regional Top of the Rockies contest, which includes participating outlets from Colorado, New Mexico, Utah and Wyoming.

Casper Colllege's Natalia Otkhmezuri jumps to pass the ball to a teammate in the T-Birds' game against Central Wyoming College on March 24 at Swede Erickson Thunderbird Gym.