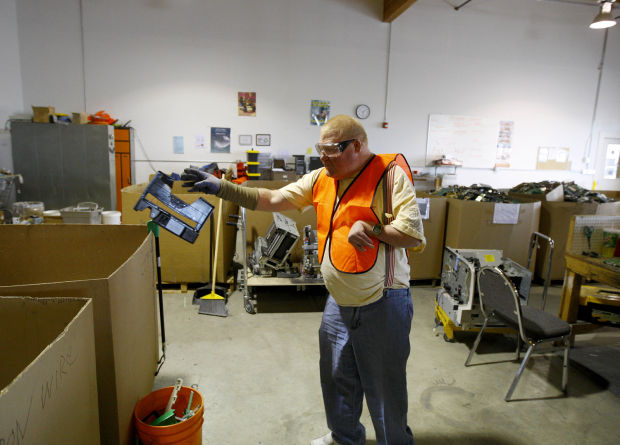 Carl Evans tosses a piece of plastic from an obsolete printer into a recycling bin during his shift at Nowcap Services on Tuesday in Casper. Nowcap is expanding its electronic recycling services, hoping to create more work for people with disabilities. 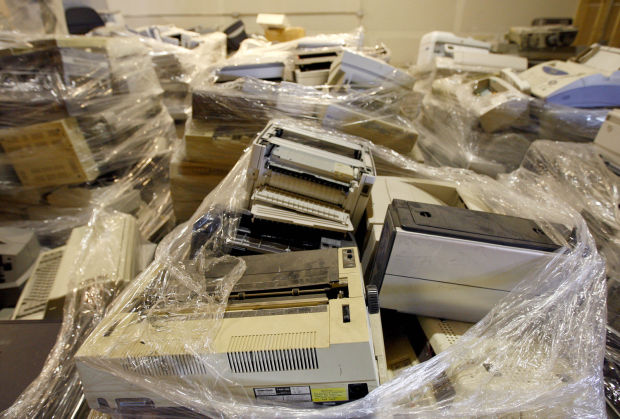 Mountains of obsolete electronics fill a warehouse at Nowcap Services in Casper. Employees dismantle the devices and separate the materials to be sent to recyclers. Valuable metals such as gold and copper are contained inside circuit boards and transformers.

Curt Beatty flinched reflexively as a loud clatter echoed off the warehouse walls.

He threw a sidelong glance at one of his employees, who looked up from the smashed computer tower panel, flashed a wry smile at Beatty and stooped over to pick up the pieces off the concrete floor.

He separated the plastic, metal and other materials into giant, chock-full cardboard boxes and reached for another panel.

“I wish I hadn’t taught him that,” Beatty, a manager, said with a laugh. “But it does work.”

Cutting Edge Industries is a loud place. Low-tech equipment disassembly methods like hammers and floor-smashing combine with the roar of top-of-the-line machinery.

The east Casper company offers something that can be hard for many of its nine employees to land: a job.

Cutting Edge, an electronics recycling center run by Casper-based Nowcap Services, focuses on hiring the disabled. It hopes to work with national organizations and use Beatty’s expertise to at least double its staff.

The idea is to command a better price on material like gold from motherboards by combining Cutting Edge’s stockpile with the stockpile of other recycling centers employing people with disabilities, said Nowcap Services Executive Director Chris Boston.

In the meantime, Beatty tests old hard drives, cables and other hardware that comes through the company’s bay doors, a process he is teaching the employees. They intend to sell the functioning equipment on sites like eBay.

Rather than receiving $1.50 a pound, they can make $20 or more on each working device.

According to March 2014 U.S. Department of Labor statistics, 14.5 percent of disabled people are unemployed, meaning they are looking for but can't find a job. Programs like Nowcap Services and Eagle Ability offer ways to decrease that number.

Boston remembers people who thought they were too disabled to work but flourished in one of Nowcap’s Wyoming businesses. The ultimate goal is moving employees into the competitive workforce, he said.

But a job offers a sense of identity, and if his employees find that with Nowcap, then that’s OK, too.

Carl Evans, who has been involved with Nowcap since 1993, fed hard drives into a slot at the top of a crunching grind machine built to devour the hardware. Beatty helped Evans pull out the bin at the bottom to show how he had reduced the drives to pieces and shards of metal.

Boston hopes to start marketing the service to organizations that need a secure way to dispose of sensitive information.

“It’s the only way to guarantee the destruction of sensitive data,” Boston said.

Nowcap Services has used money from charity foundations and government grants to purchase equipment like the hard drive machine and a baler to make plastics recycling profitable.

Nearby, Mary Arneson sorts plastics into two boxes nearly as tall as she is.

She runs through a litany of items the company accepts and doesn’t accept. Arneson has the operation down pat; she’s been with Nowcap since the late '80s.

“It’s a lot of work, but I have a couple of good friends here,” Arneson said.

In the back of the warehouse, 600-pound bales of plastics and other recyclables are ready for the next pickup headed to Denver. Cutting Edge processed 20,000 pounds of material in March, Beatty said.

Nearby, several levels of shelves wait for the day floor space for the large bales runs out.

Boston said the word is getting out. Government agencies like the sheriff’s office and U.S. Department of Agriculture regularly bring equipment to the warehouse.

But he hopes to teach employees marketing skills so they can be directly involved in pitching the recycling center to local businesses.

Boston said he already has enough demand to hire at least three more people, and he believes Cutting Edge has barely scratched the surface.

Israel: Who is Naftali Bennett?

Israel: Who is Naftali Bennett?

Smoke began to appear near the tracks around 11:20 a.m. on Thursday. At least two Casper Fire-EMS trucks responded to the scene.

Mills is inviting the community to a day-long 100th Anniversary Summer Fest on Saturday, shutting down a section of Wyoming Boulevard between Yellowstone Highway and 13th Street to do so.

Chattin' with Sal: NCHS principal to be Pinedale super

Shannon Harris is moving on after six years as principal at Natrona County High School.

Electric scooters could be coming to Casper. But some laws need to change first.

Toby Keith is bringing his "Country Comes to Town Tour," to the Ford Wyoming Center on Oct. 17. He will be joined by Colt Ford and Wyoming's own Chancey Williams.

I’ve heard about CNFR from my first day at the Star-Tribune, in the middle of winter and at the height of the pandemic, when a packed arena in June seemed like the stuff of fantasy.

Carl Evans tosses a piece of plastic from an obsolete printer into a recycling bin during his shift at Nowcap Services on Tuesday in Casper. Nowcap is expanding its electronic recycling services, hoping to create more work for people with disabilities.

Mountains of obsolete electronics fill a warehouse at Nowcap Services in Casper. Employees dismantle the devices and separate the materials to be sent to recyclers. Valuable metals such as gold and copper are contained inside circuit boards and transformers.