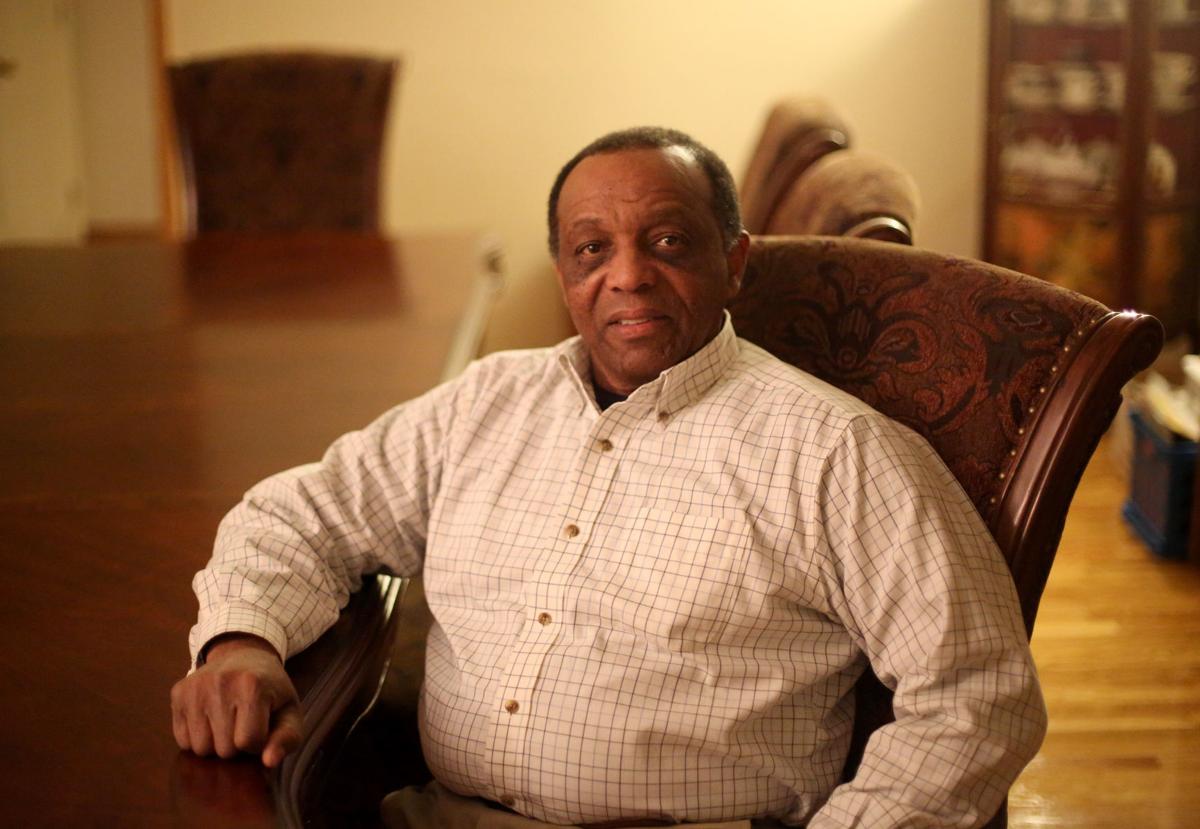 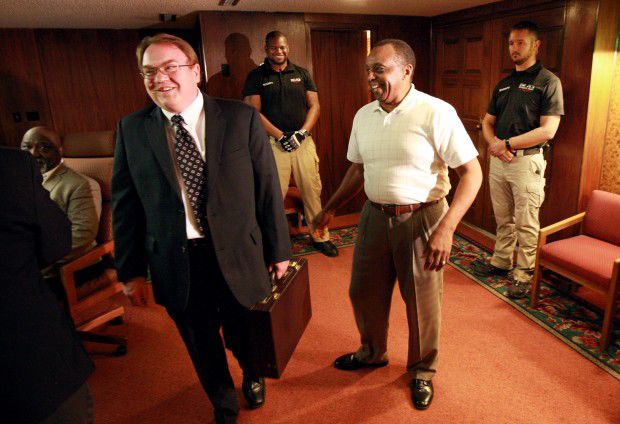 John Abarr, left, a kleagle of the United Klans of America out of Great Falls, Mont., and Jimmy Simmons, center, president of the NAACP Casper branch, arrive for a Casper meeting in 2013. Simmons stepped down as president earlier this week.

The longtime president of Casper’s NAACP branch, Jimmy Simmons, resigned Tuesday amid what he said was a leadership struggle within the organization.

Simmons gained national attention in 2013 for organizing a meeting with a Ku Klux Klan representative over the objection of senior NAACP officials.

“I started to get unpopular,” Simmons said in an interview. He became president in 2001.

Simmons said that factions had developed within the local branch and that some members wished to see him step down or for the branch to be disbanded.

“They may think I’m too big,” he speculated. “They’re thinking it’s the NAACP for Jim Simmons.”

In a possible first and under heavy security, KKK and NAACP meet in Casper

They didn’t think he would come.

After a recent trip to Senegal, Simmons said he returned to find an election scheduled on the organization’s calendar. Because he had typically been appointed by acclamation to two-year terms as president, Simmons was confused by the notice and got unclear answers from other NAACP members, he said.

He took that as his cue to resign.

Simmons generated controversy four years ago with his invitation for a Montana-based KKK recruiter to meet with local NAACP officials in Casper, following a spate of hate crimes against interracial couples in northeast Wyoming. The meeting ended with kleagle John Abarr joining the NAACP and making a small donation.

Simmons said he has no regrets over hosting the meeting and is still in touch with Abarr.

Simmons said that the meeting sparked a backlash from officials at the NAACP Colorado Montana Wyoming State Conference. But conference president Rosemary Lytle said that’s not true and that she did not try to push Simmons out.

“I was surprised by his resignation,” she said. “Mr. Simmons has served for a long time — going back to before my tenure as state president — and has worked with the NAACP with vigor.”

Lytle specifically praised his work surrounding the attacks around Gillette, which sparked a advisory from the organization for couples traveling in the region.

“He’s defended the civil rights of people of all colors and ethnicities,” she said.

Woodfield said that elections are an annual event and the calendar notice was not meant as a jab at Simmons.

Simmons said that he has accepted a job overseeing the drilling of water wells in Senegal, but that he will remain based in Casper.

Simmons helped build the NAACP branch in Casper in 2001 after a previous president stepped down. He said several of his proudest accomplishments involved advocating for minorities during employment disputes and working to combat racism across central Wyoming.

He said the Casper NAACP currently has just under the 50 members generally required to maintain a branch charter.

John Abarr, left, a kleagle of the United Klans of America out of Great Falls, Mont., and Jimmy Simmons, center, president of the NAACP Casper branch, arrive for a Casper meeting in 2013. Simmons stepped down as president earlier this week.