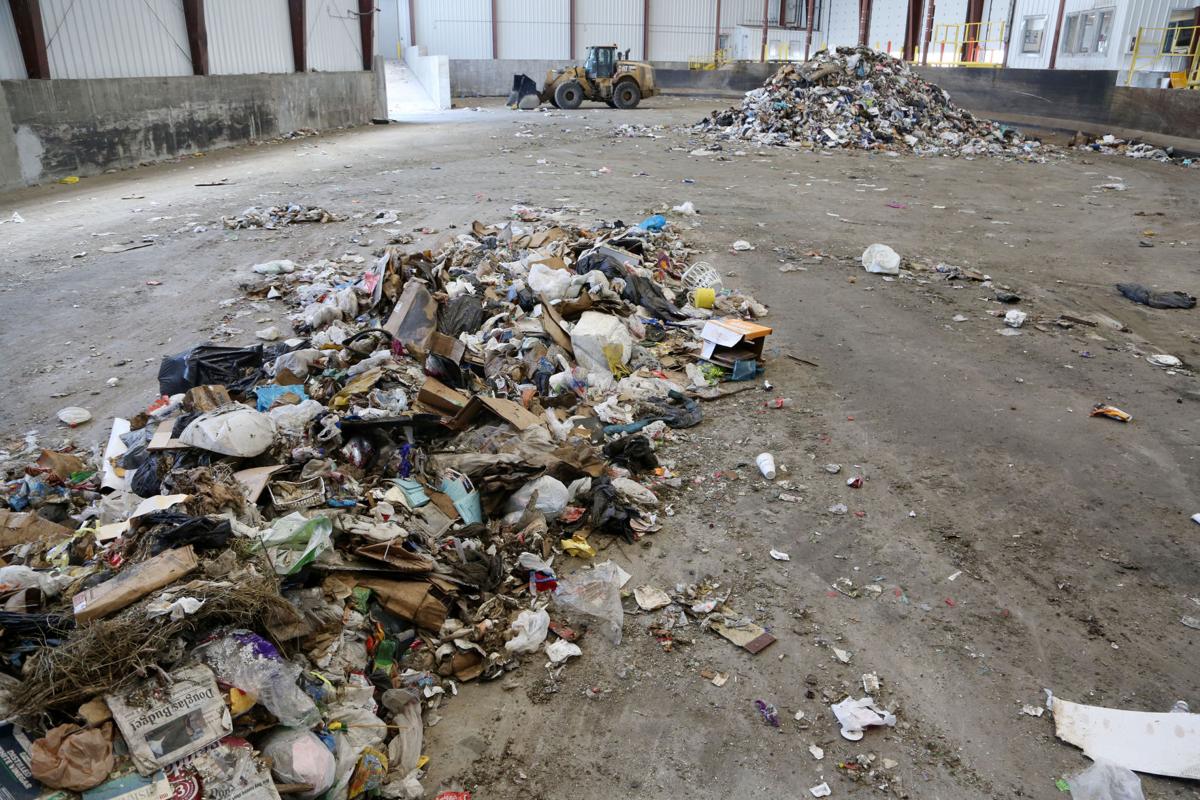 Piles of trash sit in a transfer station Tuesday at the Solid Waste Facility in Casper, waiting to be processed through a baler before being sent to the landfill. 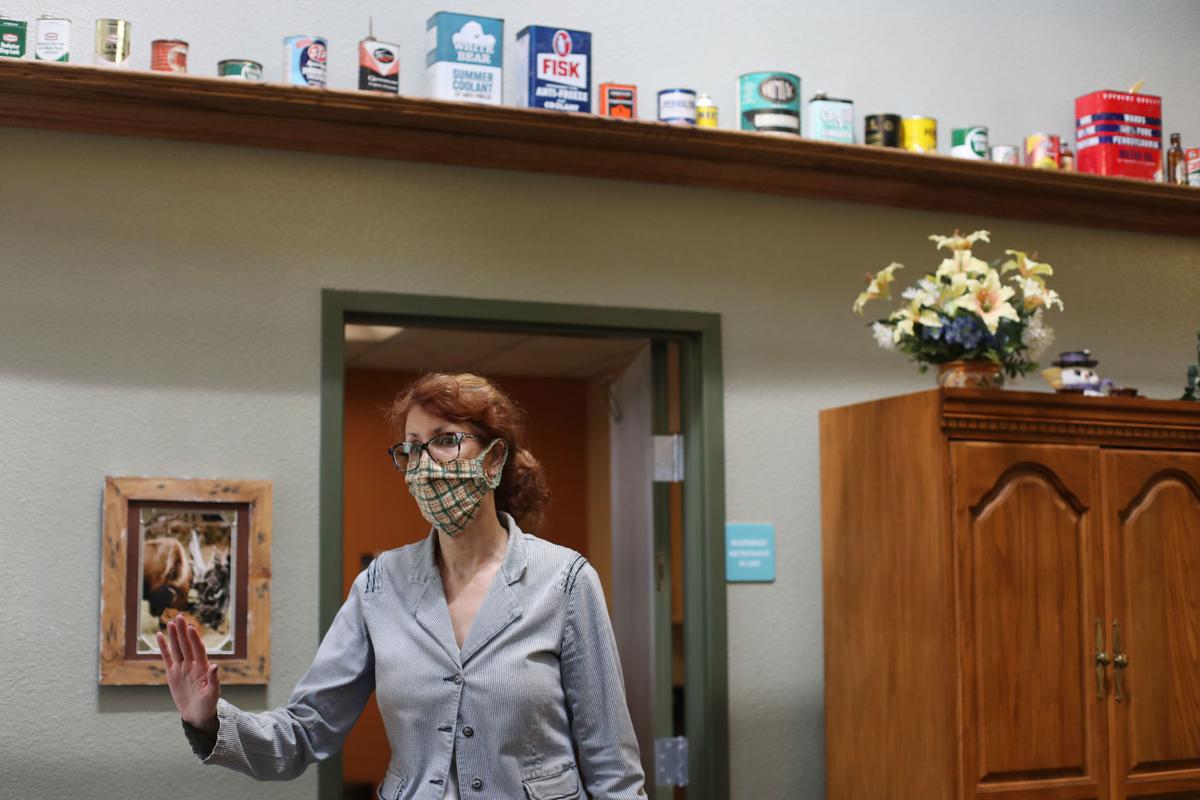 Cynthia Langston, manager of the Solid Waste Facility in Casper, gives a tour of the transfer station dedicated to toxic waste Tuesday in Casper. The offices display examples of toxic waste that have been handled at the facility. 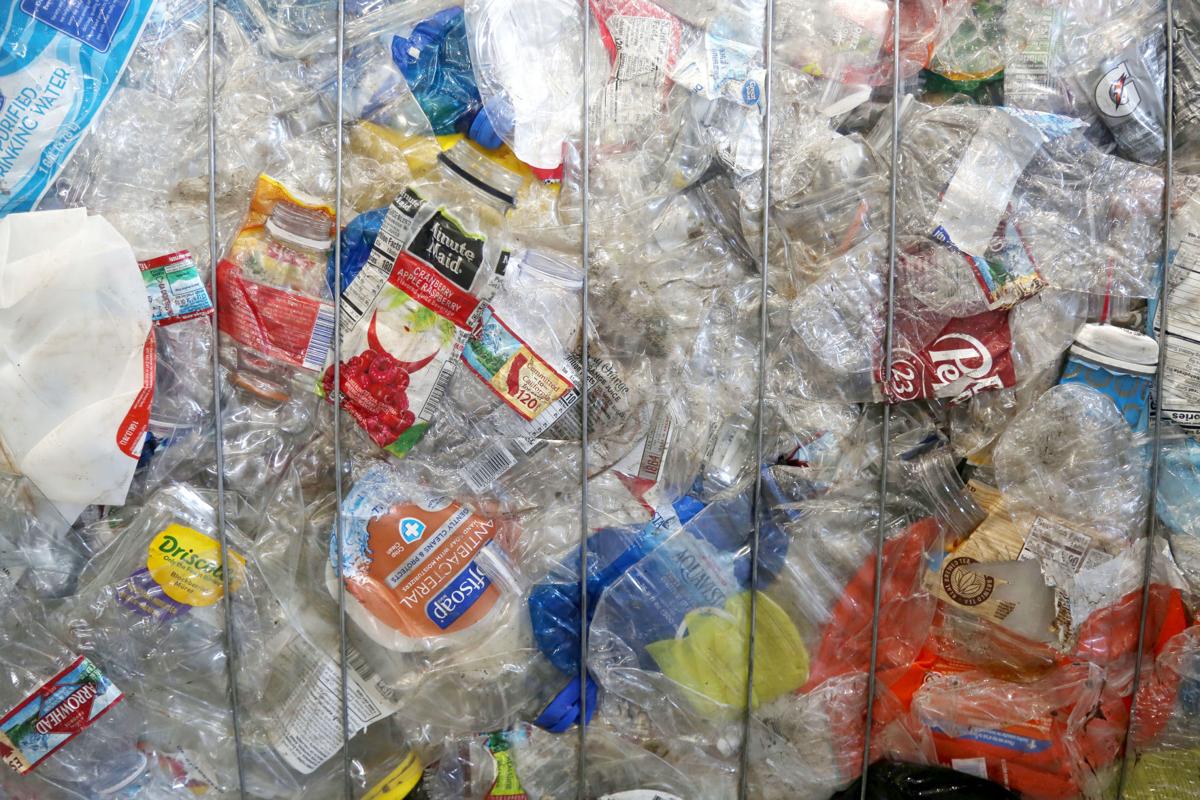 A collection of No. 1 plastic bottles are gathered in a bale at the Solid Waste Facility transfer station Tuesday in Casper. 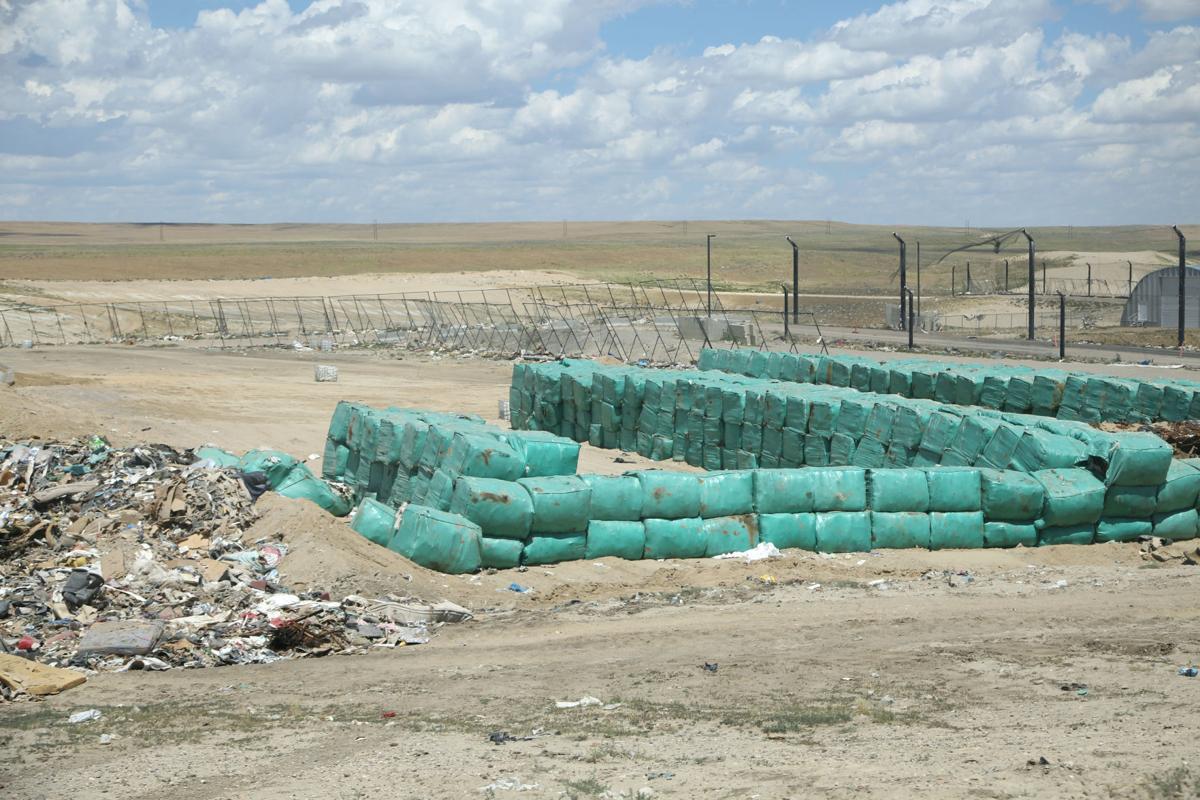 Bales of trash are stacked in one section of the landfill at the Solid Waste Facility on Tuesday in Casper. 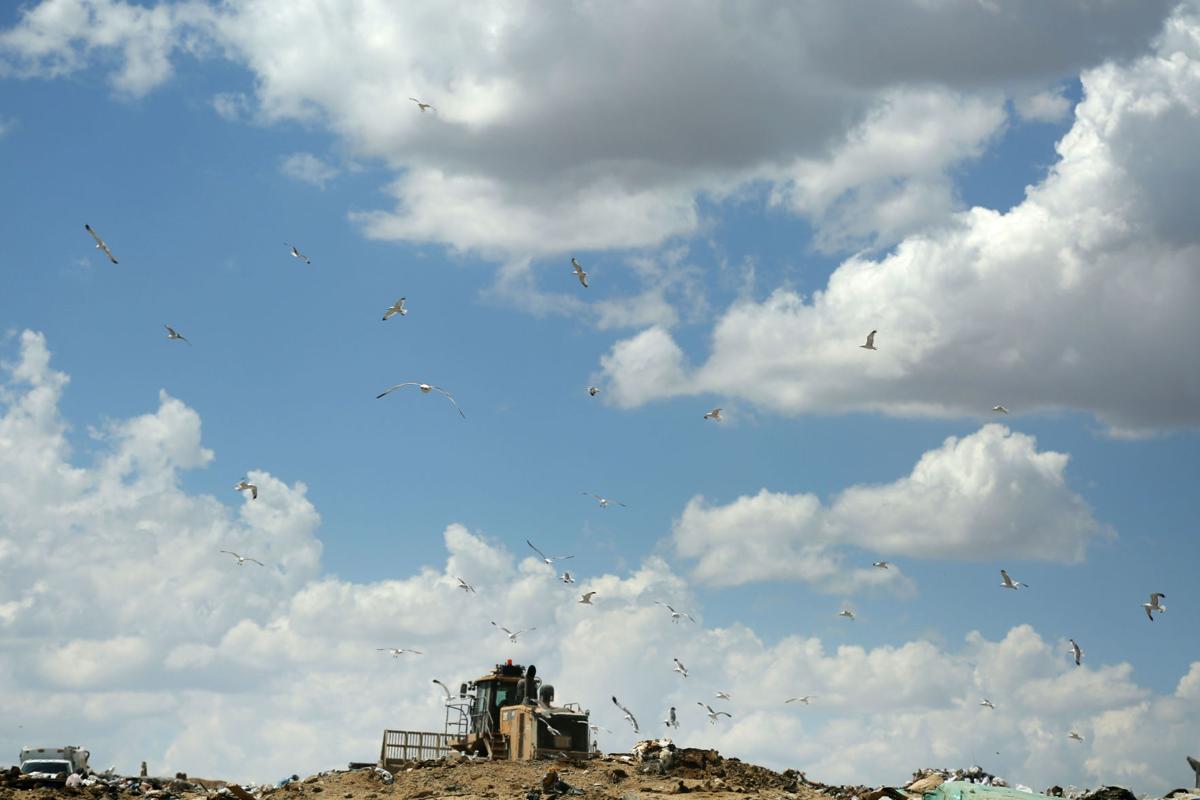 Seagulls scour the trash at the landfill of the Solid Waste Facility on Tuesday in Casper. 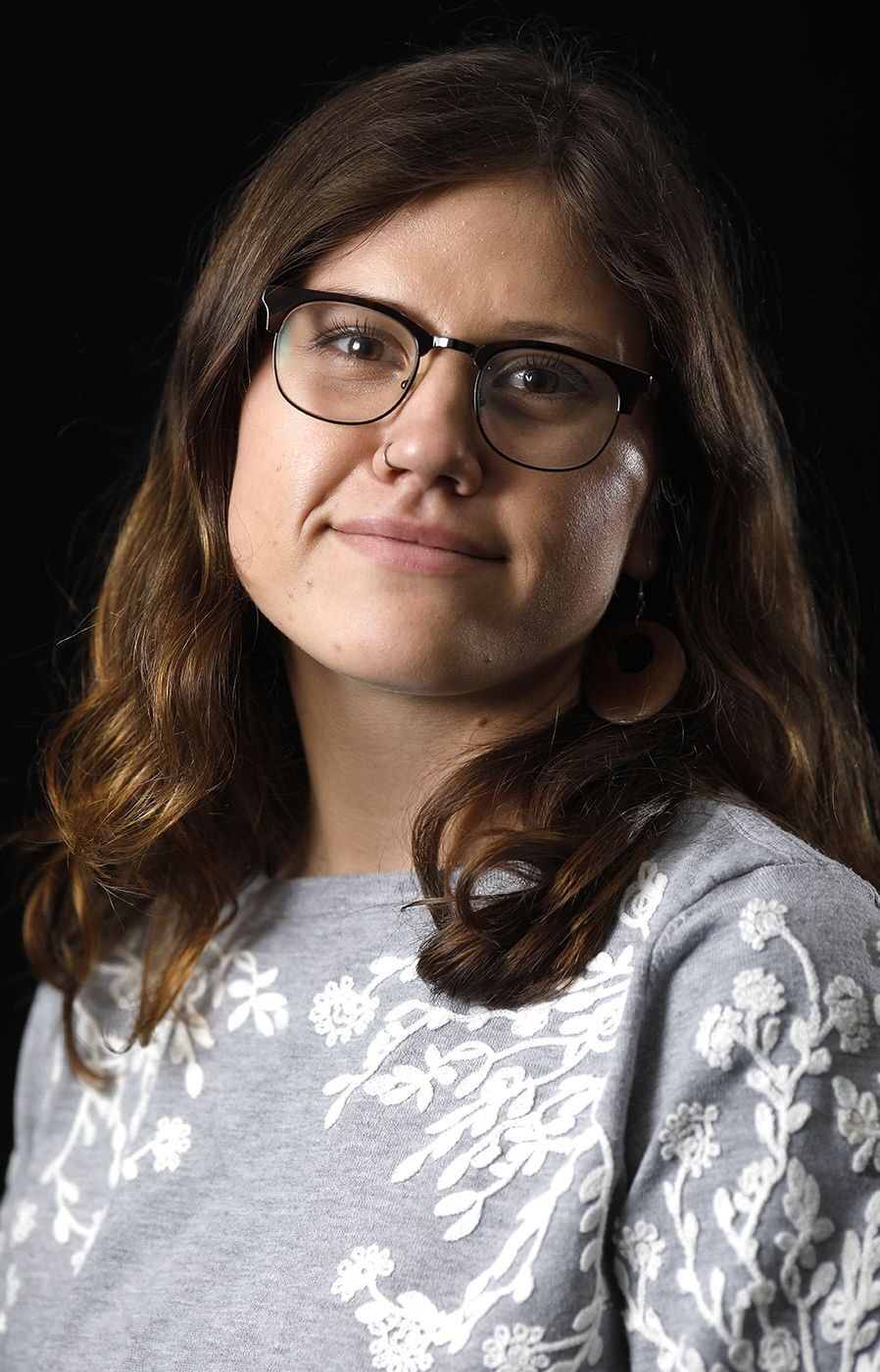 I have an image of a dumpster superimposed on my brain. I can see its heavy plastic cover in a lean-to across stacks of white garbage bags, loose clothing and heaps of aged office supplies.

The image is of all my stuff. Loaded in piles and ballooning out of the little green dumpster that sat behind the last apartment I lived in before graduating college. When I moved to Wyoming, I did so with what my dad and I could fit in his SUV. I left a lot behind, most of it in that dumpster.

I didn’t see it happen, but I assume someone eventually came to haul it away. My little life before.

I’m not trying to make you sentimental about your garbage. (Then again, maybe I am.) But I think you can see what I’m trying to say. You throw something in a bin and never see it again. If you thought about it, you could probably surmise what happens next. But if you live in the city, you probably don’t have to think about it.

The true purpose of this column is to explore the city of Casper, talk to new people and learn a bit more about how things work. Well, I really don’t know anything about what happens to my garbage after I toss it in the bin.

So this week our photographer Cayla Nimmo and I drove out to Casper’s Solid Waste Facility to learn a bit about our trash.

Let’s get the obvious things out of the way — it’s literally a garbage dump, so yeah, parts of the facility smell like garbage. But that’s truly a small portion of what goes on at the complex.

The place is huge. Casper solid waste manager Cynthia Langston has helped transform what she called “a real dump” into a sprawling waste metropolis, with varied recycling options, compost services, hazardous materials disposal and a large fleet of vehicles, in addition to an 18,000-acre landfill.

Casper Notebook: A diamond in the rough

She’s also a big reason the landfill is no longer polluting the North Platte River, where it had begun leaking in the 1980s and ‘90s.

The facility is unrecognizable from what it once was, Langston said. So large is the campus, our tour, which I anticipated would last maybe an hour, lasted three. Our guides, Langston and solid waste superintendent Sean Orszulak, never ran out of excitement or passion for the topic.

Before we go on, let me lay a few things out. The solid waste facility campus sits off Metro Road, just past the animal shelter. It spans several buildings, each with a distinct purpose and operation. Orszulak said while all the pieces work together, “it’s really three separate businesses” — the landfill, waste collection and the compost yard.

I’ll tell you about the compost yard first, because in my opinion it’s the coolest part. It’s not new; the city has actually offered the service since 1997, but it does grow every year.

The city allows people to deposit tree branches, grass clippings and other yard waste at the facility. It then turns it into compost and sells it to residents and small businesses. Orszulak said every year they try to expand the operation. This year they added dyed woodchips — they have green, red, brown and black. Langston said this is one of their most popular services.

The city’s solid waste division also handles all residential trash collection in the city and all recycling left at the various depots around the county. When the trash arrives to the facility, it’s hauled to a large concrete-floored warehouse and dumped on the ground.

New technology allows employees to mechanically sort recyclables out of the loads, which are then taken by conveyor belt into a trash compactor, where they are turned into tightly packed cubes of garbage, each weighing almost 3,000 pounds.

Langston has been doing this so long she can look at a pile of waste and tell you, “That’s about an hour’s worth.” The smell doesn’t bother her anymore, either. Of all the changes she’s seen in the last two decades, the city’s landfill is probably the most substantial.

When Langston took the job, she went to the then-city manager and told him she needed $21 million to bring the landfill into the 21st century.

“He nearly fell out of his chair,” she remembers with a laugh. A combination of county consensus money and user fees made it happen, and the city was able to close its old, polluting landfill and open new, lined cells to safely entomb the region’s waste.

The landfill also wasn’t regional before Langston. Now it serves nine communities, while accepting one-time contracts from outside entities, such as the agreement to bury wind turbine blades at the facility.

Langston said she’s always hoping to improve the business, make it more environmentally friendly and efficient. She’s currently working on a new business plan for her department, a statutory requirement.

She’s outlined a number of goals in that plan, among them a future with curbside recycling pickup in Casper and outfitting the landfill with the capability to catch and sell landfill gas emissions.

This column has been on hiatus for a while, a consequence of a more demanding pandemic news cycle. I’m not going to say things are back to normal, because they really aren’t. But l want to try to restore some routine anyway.

If you’re new to reading the Star-Tribune, let me fill you in. Each week I try to talk with someone “knowable” in the community to learn more about the city. If you have suggestions for my next interview, or a question you want me to find an answer to, email me at morgan.hughes@trib.com.

Casper Notebook: How to request public records from the city

You've got the right to request public documents, but how do you do it in a cheap and timely manner?

A beginner's guide to participating in Casper City Council meetings

Want to interact with your local council members or attend a council meeting but don't know where to start? City government reporter Morgan Hughes has got you covered.

Piles of trash sit in a transfer station Tuesday at the Solid Waste Facility in Casper, waiting to be processed through a baler before being sent to the landfill.

Cynthia Langston, manager of the Solid Waste Facility in Casper, gives a tour of the transfer station dedicated to toxic waste Tuesday in Casper. The offices display examples of toxic waste that have been handled at the facility.

A collection of No. 1 plastic bottles are gathered in a bale at the Solid Waste Facility transfer station Tuesday in Casper.

Bales of trash are stacked in one section of the landfill at the Solid Waste Facility on Tuesday in Casper.

Seagulls scour the trash at the landfill of the Solid Waste Facility on Tuesday in Casper.