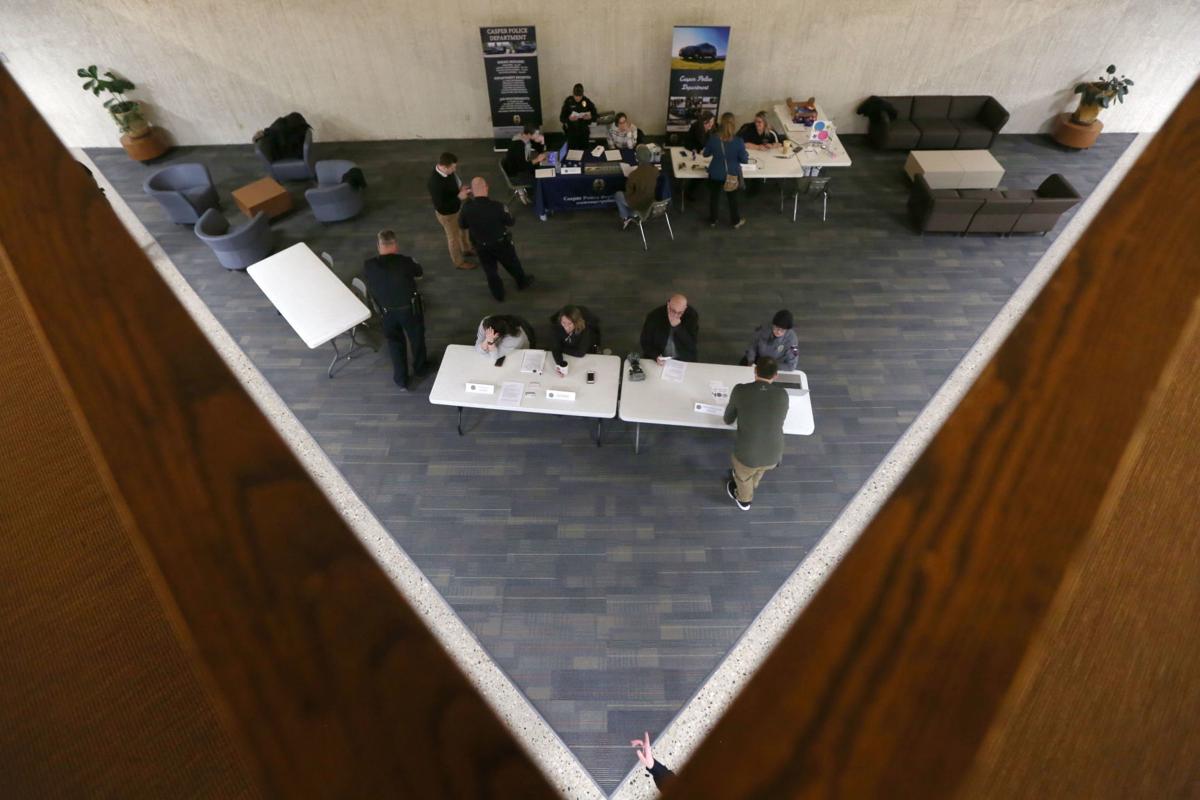 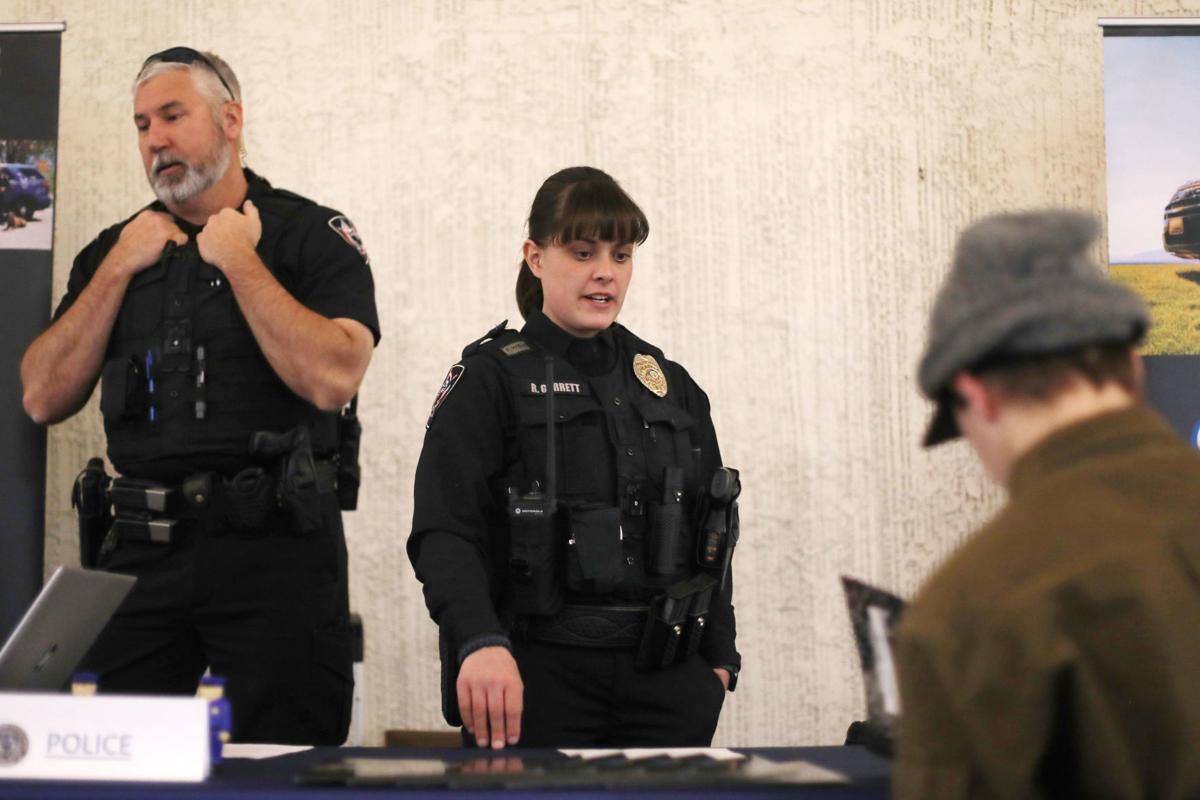 “We want to hire local people,” officer Alyssa Baedke explained while laying out pamphlets before the career fair officially began. The career fair was the first of two the department held during the day.

Baedke said the agency has held remote testings all over the country, from Pennsylvania to Idaho, hoping to recruit new officers. But despite the wide net, most new hires will be Wyoming natives.

Nick Tennant is hoping to be among them. He recently graduated from Casper College with a degree in criminal justice. When he began his studies his goal was to eventually work for the Department of Homeland Security.

He’s since reevaluated those goals and is now looking for something more local.

The Casper native is excited for the opportunity to be among that cohort and serve the community he grew up in.

Lisa Lacomb was drawn to police work for similar reasons. She’s been working at the county’s juvenile detention center, while sitting on a criminal justice degree. She said now seemed like a good time to try to put that degree to use.

While possessing a college degree could earn officers more money, higher education isn’t a requirement. Baedke said all somebody needs to serve in uniform is the desire to do so.

But applicants will also need to prove they are physically fit enough for the work.

Department hopefuls must pass a physical exam that involves one minute each of timed push-ups and sit-ups, and a timed 1.5 mile run. If they pass the physical test, they’ll move on to a written exam taken the same day, which they’ll need to pass before moving onto the interview phase of hiring.

The physical testing is Sunday at Kelly Walsh High School. Applicants will need to have formally applied for a position before showing up to the test. Applications are online at governmentjobs.com/careers/casperwy.

The department currently has eight openings for officers. Baedke said that may not seem like a lot, but for already-sworn officers who would typically rely on those positions being filled, it’s a pretty wide gap.

“You notice the difference,” she said.

The Casper police chief set three goals for himself when he took over. Six months later, he says he's meeting them.

Staffing shortages have dogged the department for the last few years, but local leaders are hoping a combination of good luck and a few intentional policy shifts initiated by Chief Keith McPheeters will reverse that trend.

Since taking over the Department in Dec. 2017, McPheeters has completely redesigned how officers in the Casper department get paid. Officers who sign on to work in Casper could receive signing bonuses from $3,000 to $12,500, depending where they’re coming from and how much experience they have.

Those bonuses aren’t the only change in the department’s pay structure. McPheeters has said the department struggles with retention just as much as recruitment.

In the past, the department’s pay scale maxed out after five years, leaving no room to move up or earn more than cost of living adjustments within the department.

Under a new model, approved by the City Council this summer, McPheeters created additional positions under more varied wage bands to give officers better upward mobility within the department.

Similar changes could be implemented for all city employees, depending on the findings of a class and compensation study the city is conducting beginning this month. City Council will review the results of that study in April, according to the city’s budget calendar.

But with the changes already in place at the police department, it may serve as a guinea pig for other city departments.

Online applications will remain open until Thursday. On Friday, the department is holding a “meet and greet” at Hogadon Ski Basin for interested people and their families to meet members of the department. The department is also holding practice tests all week to help applicants prepare for the big day Sunday.

The house is for 16- to 19-year-old students, but residents won’t be asked to leave upon high school graduation or their 19th birthday. They’ll get help transitioning to different housing and are able to stay in the house through their first semester of college.

Dog lost after falling through ice at Morad Park

The dog, a 5-year-old chocolate Labrador retriever named Zoe, fell into the water at the off-leash park around 2:30 p.m. Tuesday.

"I thought Wyoming really stepped up for women's athletics back in the day," McDonald said.

Brooke Youmans, a sophomore at Natrona County High School, was recently selected as a Wyoming distinguished finalist for the Prudential Spirit…

Tickets for the originally scheduled event will be honored at the rescheduled game.

Interstates 25 and 80 have both reopened, as of Tuesday afternoon.

Interstates 25 and 80 have both reopened, as of Tuesday afternoon.

All Casper Municipal Court cases have been rescheduled for sometime after this week.