Casper police hope their new home will accommodate a growing force, rapidly expanding evidence database and foster a better relationship with the public.

The city paid $8 million from its $9 million American Rescue Plan allocation to purchase the Casper Business Center on April 29.

Now, Casper is collecting roughly $20,000 a month in rent from the building’s remaining tenants, though a few are beginning to move out of the space. City Manager Carter Napier said most of that money is going back into maintenance and utilities for the facility.

The transition to the new building is expected to take between two to three years. The first step will be a design done by an out-of-state contractor that specializes in law enforcement facilities. From there, the city will assess the cost of renovations that need to be made to accommodate the police department.

Those renovations will be paid for from Casper’s CARES Act fund. More than $11 million of the city’s $13 million allocation has yet to be used, Napier said.

At a press conference on Wednesday, Casper Police Chief Keith McPheeters said the new headquarters will make operations more efficient by consolidating all departments under a “single, purposely designed” facility.

Right now, Casper police occupy the rented first floor and part of the basement at the Hall of Justice on David Street, sharing the building with the Natrona County Sheriff’s Office. Separate buildings around town house the department’s dispatch and evidence workers.

After the police move, the sheriff’s office plans to expand into the vacated space.

The limited space in the current facilities, which are rented for a total of around $250,000 a year, also makes it hard for officers to meet with members of the public, McPheeters said. There are no designated, quiet rooms to speak to victims or where officers can easily take a report confidentially.

The new space will have much more public parking, the chief said, and the department plans to include a public meeting space in the design.

The ceiling tiles in the department’s current digs are bowing under the weight of the wiring needed for the department’s technology, McPheeters said. The new building, which houses internet and phone carrier Mountain West Technologies, is much better equipped to deal with modern technology police use to investigate digital crimes.

McPheeters said that the department is also dealing with “terabytes and terabytes” of video evidence, both from officers and submitted by the public. That requires servers and storage to maintain.

The department itself has also grown “quite significantly” in the last few years, thanks to new hires. McPheeters said that around 20 positions were vacant when he arrived in late 2017, compared to just two today.

An environmental assessment found some asbestos in the building. Napier said it should be easily entombed without delaying the renovation process.

A few city employees should be moving into the building before renovations begin, said Mayor Ray Pacheco. It’s too early to know which offices will make that move, McPheeters said.

The last active lease in the building is set to expire in July 2023 , Napier said.

“It’s not hard for me to look behind me and see the building over here and imagine one of our patches on that great big wall space over there,” McPheeters said.

Ambulance involved in crash in Mills

Witnesses told the Star-Tribune a truck hit the ambulance, knocking it on its side.

Abortion rights protesters are gathering at intersections in Casper ahead of this afternoon's march and rally.

Protesters march in support of abortion rights in Wyoming

Around 200 abortion rights demonstrators — children, parents, grandparents, students and friends — clutched cardboard signs with slogans including “I marched for this 50 years ago,” “Stop the madness” and “Whose rights will be next?”

Vice Mayor Steve Freel says he doesn't plan to run for council again. His seat and three others are up for grabs this fall.

The Magpul Wyoming Governor’s Match, a target-shooting competition, will be held in Casper this summer. Past competitions have been held in Cheyenne and Cody.

Businesses that led Casper's downtown revitalization have closed. What's that mean for the area's future?

While a revitalization effort has attracted new businesses to the city's core, some have recently shuttered. What's the long-term outlook for downtown Casper?

Abortion rights march and rally planned for Saturday in Casper

A rally at Conwell is planned to begin at 2 p.m. Saturday. Julie Burkhart, founder of Wellspring Health Access and the planned Casper abortion clinic, is set to speak.

It’s an opportunity for members of the public to come together, talk about downtown preservation, get acquainted with local resources and ask questions.

U.S. solar projects on hold due to tariff inquiry 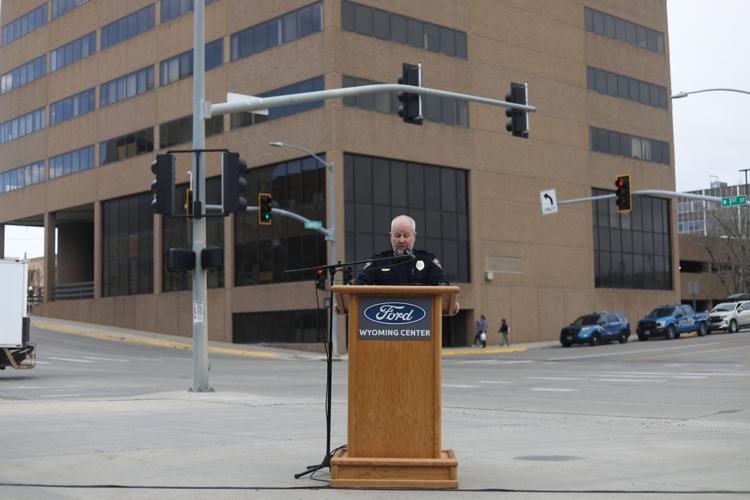 Casper Police Chief Keith McPheeters talks about the purchase of the Casper Business Center, directly behind him, to house his department, on Wednesday in downtown Casper. McPheeters told reporters the new home will help the agency accommodate a growing police force. 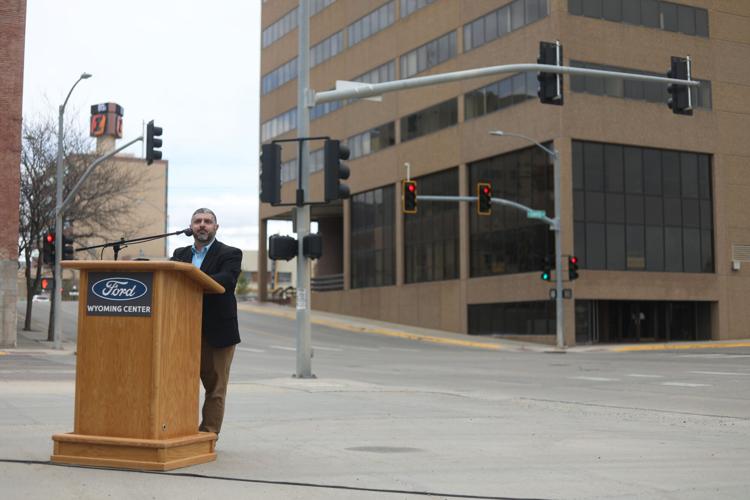 Mayor Ray Pacheco talks at a press conference Wednesday concerning the purchase of the Casper Business Center, directly behind him, for the city's police department.