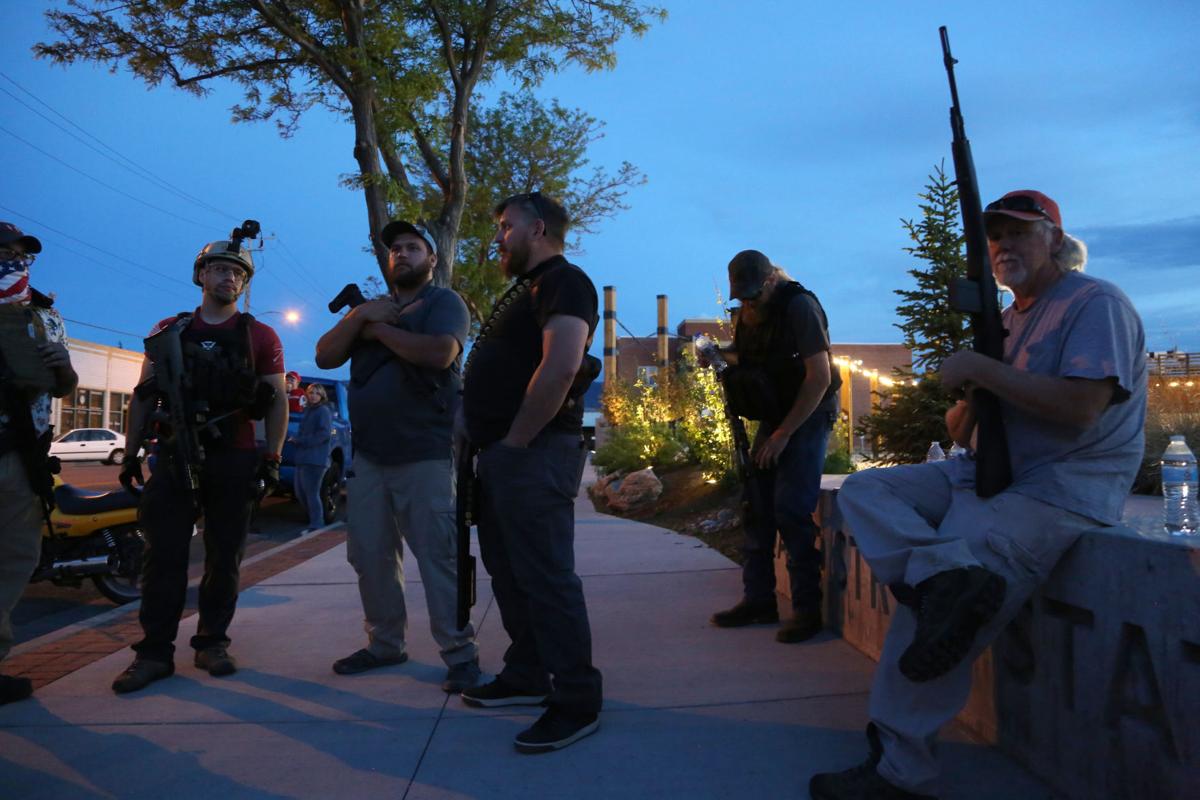 Citizens armed with long guns stand by David Street Station in Casper on Wednesday. The group said they were there to dissuade anyone who might try to loot or vandalize area businesses. 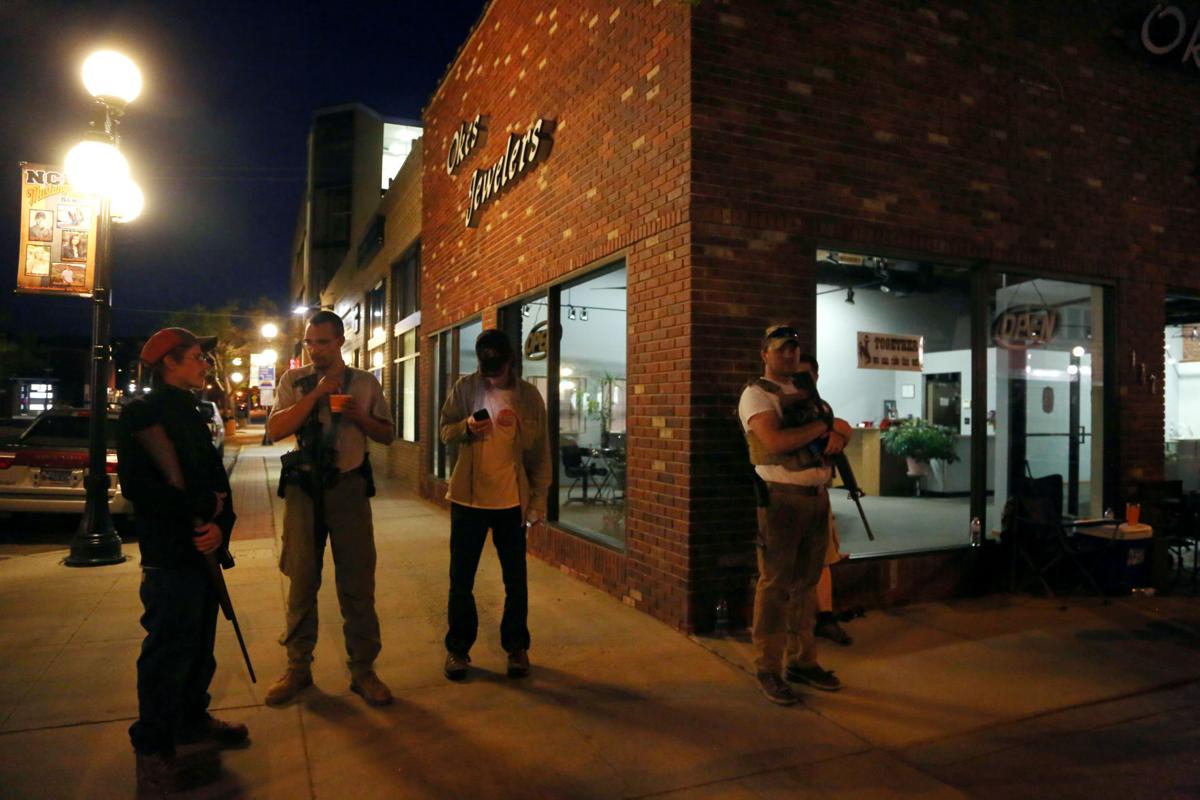 Citizens armed with long guns stand guard outside Okes Jewelers on Wednesday in downtown Casper in an effort to protect the store from potential looters. The store has been in business for over 60 years and at this storefront for over 10. 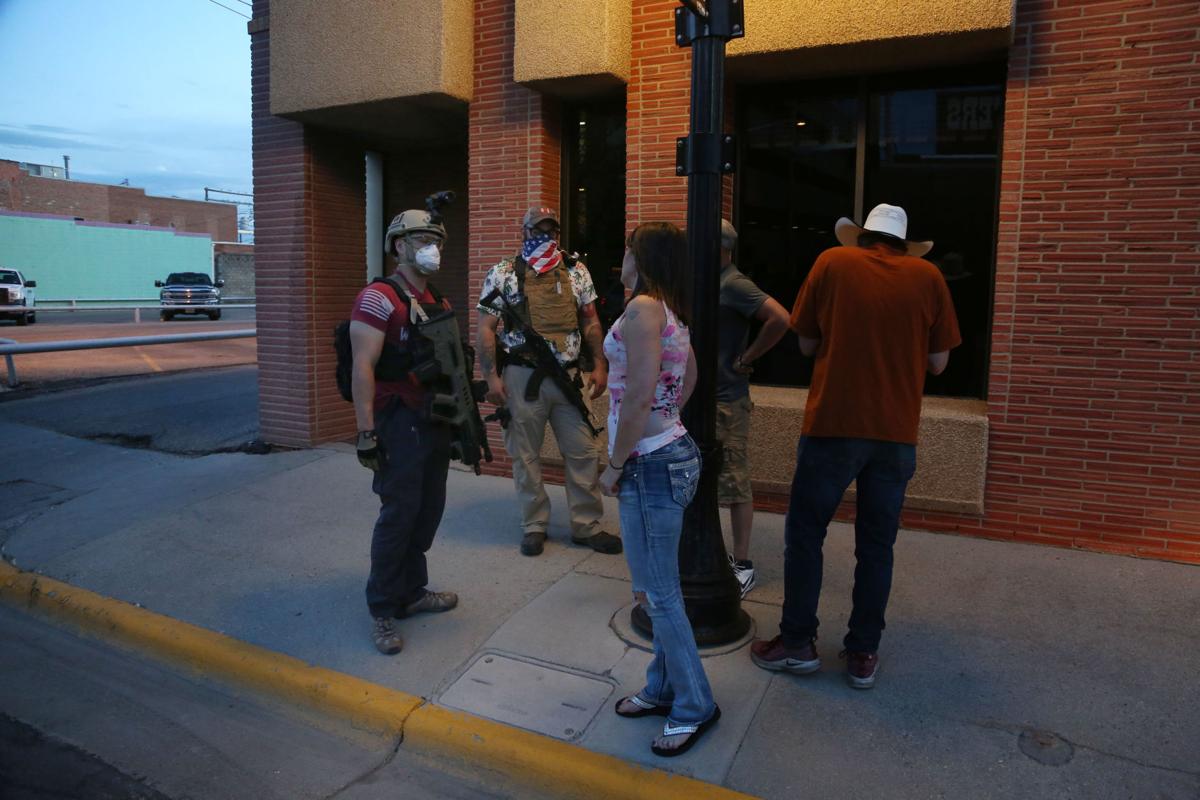 Armed citizens talk with a group of people in downtown Casper on Wednesday.

The groups, which consisted of mostly men, were gathered throughout the downtown area. Some sat in front of businesses. Others lingered at David Street Station, where the march began hours earlier.

The armed residents told a reporter they were not there to disrupt additional protests, but rather to protect downtown should things escalate.

Josh Wheeler, a Wyoming candidate for U.S. Senate, stood armed with a long gun on a corner downtown among maybe five or six others, to be "better safe than sorry," he said.

Wheeler supports the rights of protesters to demonstrate, but was worried that there was the potential that protesters from earlier in the day could return downtown and start damaging property.

His largest concern was the threat of outside influences wanting to agitate things. All the protesters the Star-Tribune interviewed earlier said they were Casper residents.

Otis Blume said the group was planning to hang out downtown just to observe and report, and step in if need be.

“A bunch of guys are worried about our town,” Bloom said, pointing to the destruction that has occurred during protests in major cities across the U.S. in the last week.

Although there were several groups of armed residents, they said they were entirely unrelated from one another and organized independently.

All of the men the Star-Tribune spoke with Wednesday night said they were not affiliated with any organization, but rather just groups of friends all seemingly with the same idea.

A variety of armed bystanders also attended the protest earlier in the day. Some were there to protect the rights of the protesters themselves, they said. Others wound up in verbal altercations with those marching for George Floyd.

John Creamer, armed with a small handgun in a holster at his side, patrolled Second Street downtown Wednesday night dressed in a cutoff T-shirt with “Freedom Chasers” printed across the front. He was accompanied by a young man who was also armed with a larger firearm slung across his chest.

“People were making comments that after dark these businesses weren’t safe,” Creamer said.

A family in a white SUV pulled into a parking spot behind them, and a man and his daughter got out to thank the men for what they were doing, and to take a photo. A handful of others honked or yelled encouragement to the men as they passed from vehicles.

Creamer said the businesses downtown have already struggled for three months, and property damage could ruin them.

“There were a lot of us who heard rumors things would be violent,” he said, adding that he’d had a brush with one hostile person earlier in the night. He said they were out to support "All Lives Matter."

Buster Morgan, Shane Ogden and Rick McComsey stood amid a gathering of maybe 10 others near David Street Station, another group concerned about the potential for property damage downtown.

Morgan and McComsey were both heavily armed -- Morgan carried a shotgun and shells belted across his chest.

“We don’t care about politics, we just don’t want anybody to get hurt,” Morgan said.

He said their group -- separate and organized independent of the others -- had been watching what was going on in cities across the U.S., and worried once night fell, “that’s where the bad element comes out.”

He added none of their group had real plans to use their weapons, but thought the firearms would be a powerful visual.

“Mostly this is just a show of force type of thing,” Morgan said. “If I’m coming at you with a 12-gauge Mossberg (shotgun), you’re probably going to run away.”

Ogden emphasized the group was not there to dissuade protesters, only property destruction.

Wednesday's protests attracted hundreds of people to downtown Casper. There were no reports of arrests and one report of property damage involving a protester punching the mirror of a truck.

In the days leading up to the protest, rumors spread that antifa or other groups might loot and vandalize Casper. Those rumors turned out to be unfounded.

A march across Casper to deliver a message about police brutality

The three-hour, roughly seven-mile march sprung from a more formally organized midday demonstration on the steps of Casper's Hall of Justice.

Councilman Mike Huber took issue with the groups of armed residents who patrolled downtown after Friday's demonstration. Councilman Steve Cathey questioned whether the protests went against precautions put in place because of the coronavirus.

Before a gun can be used in self-defense, Natrona County District Attorney Dan Itzen said, a person has to be in fear of death or serious bodily injury. Property damage alone would not meet the standard for a self-defense argument.

David Mercado decided he needed to be there to document the moment after years of news about police brutality around the country made him passionate about police reform.

Citizens armed with long guns stand by David Street Station in Casper on Wednesday. The group said they were there to dissuade anyone who might try to loot or vandalize area businesses. 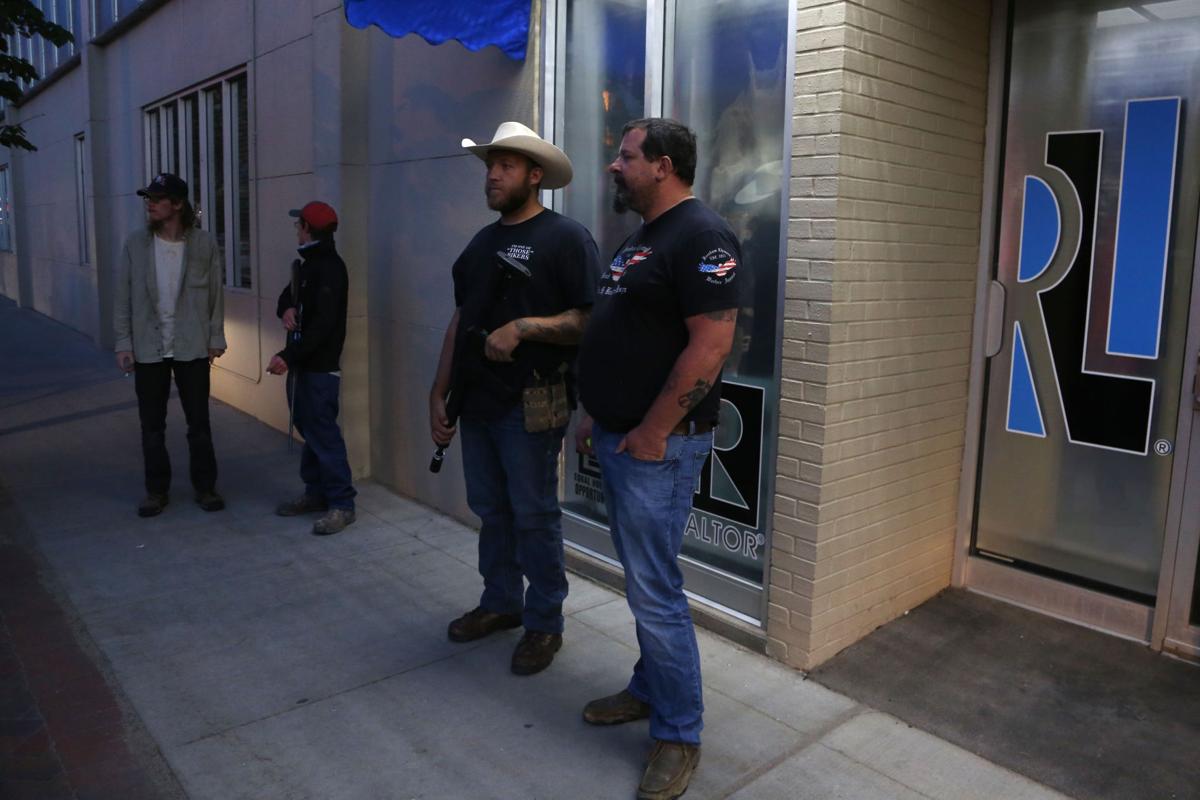 Citizens armed with long guns stand guard outside Okes Jewelers on Wednesday in downtown Casper in an effort to protect the store from potential looters. The store has been in business for over 60 years and at this storefront for over 10.

Armed citizens talk with a group of people in downtown Casper on Wednesday.