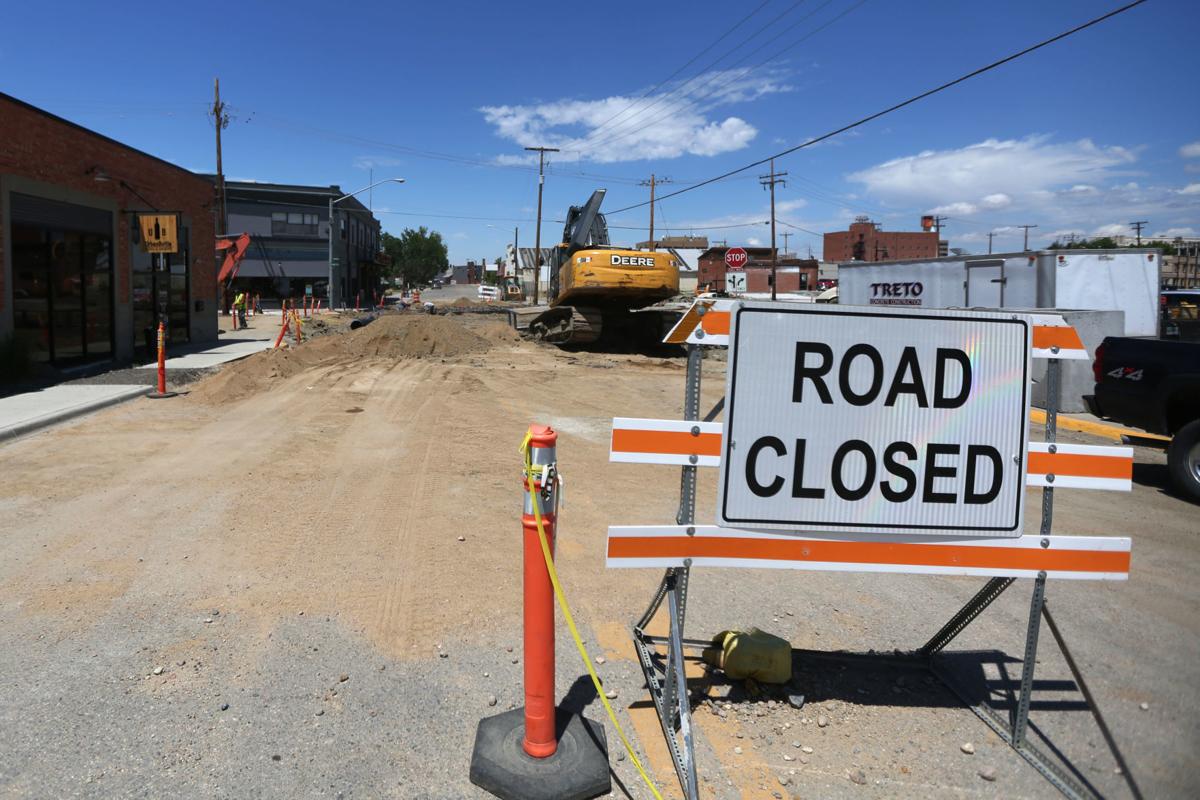 A barrier on Ash Street blocks traffic from crossing Midwest Avenue while construction continues on the downtown development project July 3 in Casper. 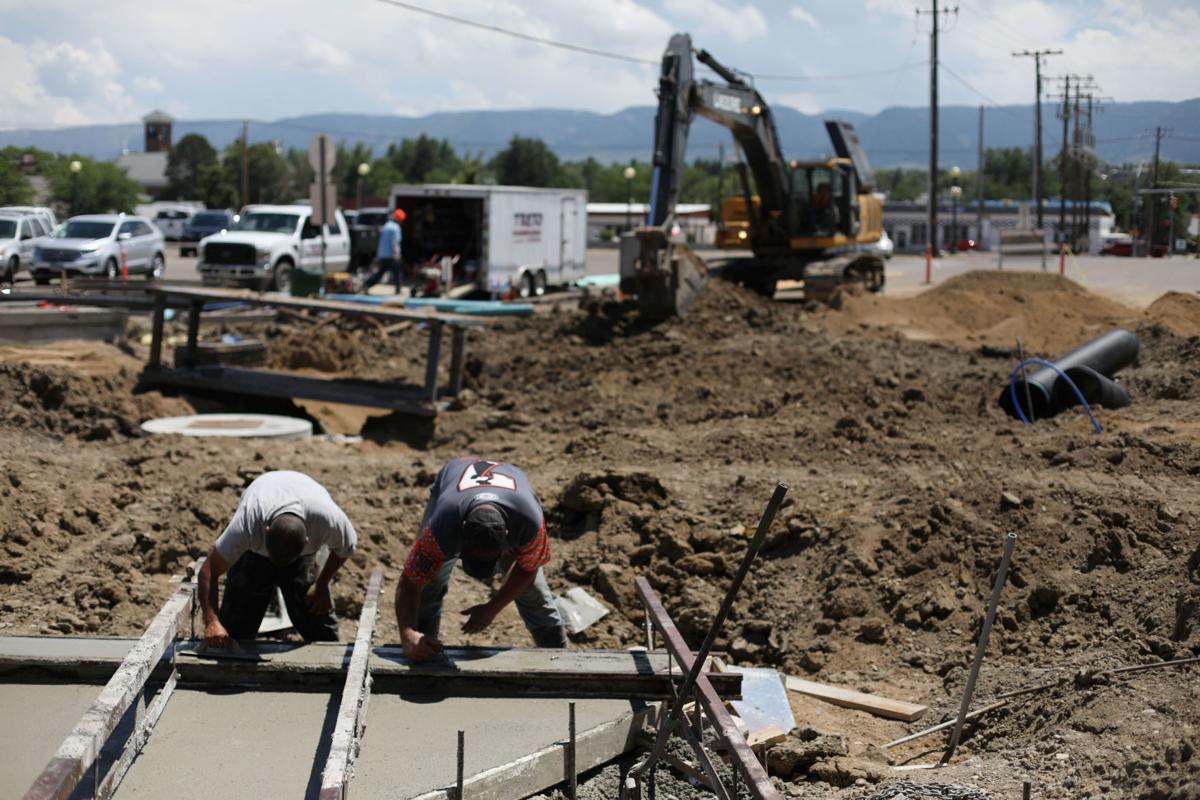 Sergio Gonzalez, left, and Rocky Kirk with Treto Construction finish a section of concrete July 3 at the intersection of Midwest Avenue and Ash Street in downtown Casper. 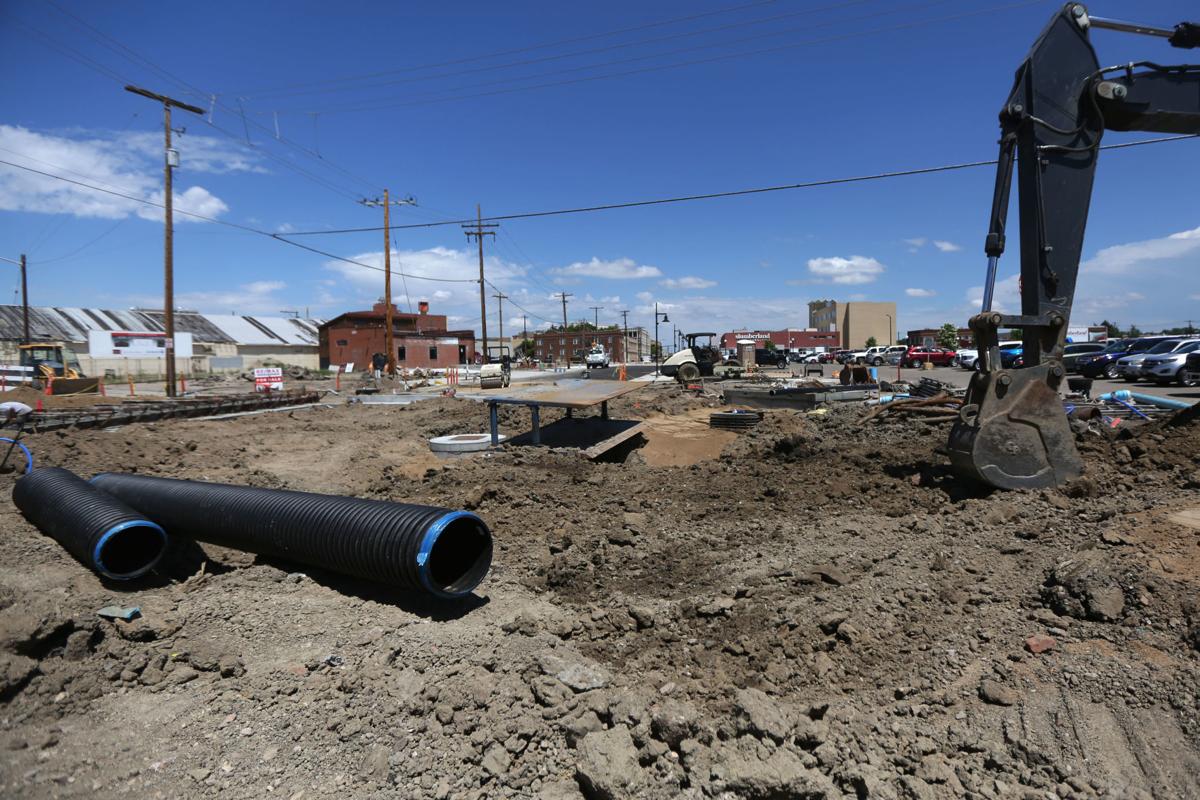 Construction continues on Midwest Avenue at the intersection of Ash Street on July 3 in downtown Casper.

The city of Casper is hoping to get roughly $2 million in state and federal grant money to pay for the rest of the Midwest Avenue reconstruction project.

The money would cover the last few blocks of the street’s construction. The city would pay $498,000 from 1-cent money toward that final phase of the project.

Another $1.9 million would come from a federal BUILD grant, meant to help states and cities develop local infrastructure projects.

Casper has submitted the grant application before, but each time it has been rejected because under federal Department of Transportation definitions, Casper was considered an urban area. That meant Casper — with a population under 60,000 — had to compete with cities like New York and Chicago for the same money.

This year, the department changed its urban and rural distinctions, so now Casper is defined as rural by the federal government. Community Development Director Liz Becher said she thinks this will give the application a better chance at success.

The city is also submitting an application to a special grant fund offered by the Wyoming Department of Transportation meant to develop alternative transportation, like walking and bike paths. Casper is asking for just under $220,000 from that fund. Wyoming allocates roughly $2 million across the state through that program annually, according to Wyoming’s transportation department.

Casper will earmark that money — if the grant application is accepted — for bike and pedestrian projects, including putting in a protected bike lane down Midwest Avenue and connecting it to the area’s other trails.

If the grants are rejected, Becher said the city would try again.

Indeed, the final phase of the project, which these grants would pay for, wouldn’t even begin until 2022. By the end of 2023, roughly $8.4 million will have been spent on rebuilding Midwest Avenue. It will be pedestrian friendly, adorned with street lights and more accommodating to commercial and residential development, Becher said.

Right now, the city is working on the first phase of reconstruction — from David Street to Elm Street. Those two blocks took $2.5 million in city 1-cent money to get off the ground.

The next three blocks of the project — from Elm to Walnut streets — are also funded, but that construction won’t begin until April. The Wyoming Business Council gave Casper a $1.5 million grant for that portion, and the city pitched in $1.9 million in 1-cent money.

The business council grant requires the city to report back to the state and show proof of business and residential growth in the area. The pending sale of the former Plains Furniture properties to Flag Development, led by Downtown Development Authority board members Brandon Daigle and Kevin Hawley, is one part of this. (Daigle and Hawley operate Flag separate from the DDA.)

The pair plan to develop the properties into mixed-use spaces, adding up to 11 townhouses and seven three-story row houses downtown.

Other efforts to develop more housing and commercial space in the area are also in the works. Casper-based Ashby Construction will break ground this month on a mixed-use building with three live/work units. The units would have apartments above commercial spaces.

Dave Ashby, owner of Ashby Construction, said he already has a buyer for one of those units, though declined to reveal who that buyer was.

Becher said it’s important to have a “rooftops before retail” mindset. Ashby echoed this. It’s a common refrain among urban developers. The idea is that having more residents in the area will encourage more businesses to set up shop.

The Midwest Avenue project is part of that, Becher said.

A state board gave final approval Thursday for a $1.5 million grant to renovate part of Casper's Midwest Avenue, the city announced.

The Wyoming Business Council has approved the City of Casper’s grant application requesting approximately $1.5 million to help pay for the sec…

The former Plains Furniture property may soon be under construction. The Casper City Council voted to approve a proposal to create residential…

Midwest Avenue will get a $2.5 million renovation

Midwest Avenue is getting a makeover.

A barrier on Ash Street blocks traffic from crossing Midwest Avenue while construction continues on the downtown development project July 3 in Casper.

Sergio Gonzalez, left, and Rocky Kirk with Treto Construction finish a section of concrete July 3 at the intersection of Midwest Avenue and Ash Street in downtown Casper.

Construction continues on Midwest Avenue at the intersection of Ash Street on July 3 in downtown Casper.