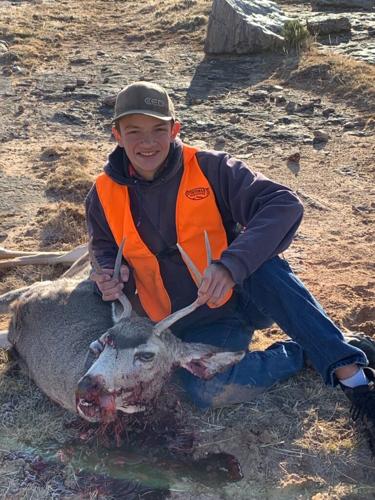 2022 Wyoming State Merit winner Asa Limmer poses for a photo with his first buck. The same animal inspired the idea of building a prion scanner for the 3M Young Scientist Challenge. 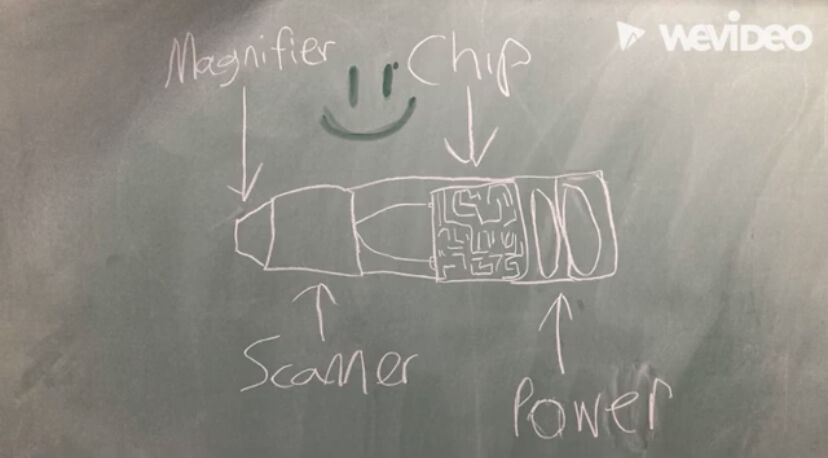 The prion scanner diagram as included in Limmer's submission video.

For the past seven years, Wyoming hasn’t quite made the cut when it came to the 3M Young Scientist Challenge. This year however, the state is back on the list.

The challenge is hosted by 3M and Discovery Education and invites kids grades fifth through eighth to pick an everyday issue and find an original solution. Students then create and submit a video explaining their answer to the problem.

The problem Limmer chose to tackle presented itself when he shot his first buck. After turning in the animal and waiting three weeks to get its chronic waste disease test results back from the Wyoming Game and Fish, Limmer said that while he understood the importance, he thought the time frame was a little long.

“So I decided I’d come up with a new and faster way to determine if a deer had chronic waste disease,” he said in his submission video.

And he did. Or the concept of one, at least.

The idea was a prion scanner, featuring a chip programmed with all possible proteins that can be found in the deer or elk. The scanner would have the ability to check the lymph nodes, the obex region and tonsils of the animals, and if an unknown entity was found in the system, then chronic waste disease is most likely present. Limmer researched the concept for a couple weeks, then put together a YouTube video explaining his invention.

Under his 8th grade science teacher, Mrs. Laura Paige’s, direction, Limmer submitted the video to the 3M Young Scientist Challenge in April. Then, towards the end of June, he got an email congratulating him on winning the Wyoming representative as one of the 2022 State Merit winners.

The Limmer family had been on vacation at the time of the announcement.

“I was super excited,” Limmer said. “Honestly, it was like an extra bonus with all of the fun.”

The email had come through the phone of his mom, Jen Limmer. She said that as soon as Asa read the news, his face immediately lit up.

“He had the biggest grin, he just looked so excited,” Jen said. “I don’t know what we were expecting with such a big competition, but he had put so much work into it. He was really excited.”

The competition is far from over. Of the 31 state merit winners, four will receive honorable mentions and 10 will advance as finalists. From there, the finalists have the opportunity to participate in a summer mentorship program and final event activities. The finalist whose project scores the highest in creativity, scientific knowledge, persuasiveness, effective communication and overall presentation will earn the title of “America’s Top Young Scientist.” Prizes for first place include a destination trip and $25,000.

If he wins the prize money, Asa has a few ideas of what he would do with it. He said he would first donate some money to his church to help with their current remodels, then maybe get some new hunting gear and put the rest towards a car.

His mom laughed and said that was a good idea.

“I think it’s good to have those types of awards,” Jen added. “It just motivates him to keep going and to keep working hard.”

The finalists will officially be announced on Thursday. Asa said that at first he felt a little on edge waiting for the announcement day, but now he’s feeling more laid back about it. After all, he has other things to look forward to.

In the fall, Asa will begin at Kelly Walsh High School as a freshman. And while he’s just entering the start of his high school career, he has a tentative plan for the future.

Roads flood in parts of Casper as thunderstorm passed through

Sections of Poplar Street near Interstate 25 were swamped with water as torrents of rain fell over the area.

After local flooding in Casper, more rain is on the way

A massive thunderstorm dumped torrents of rain over Casper on Thursday night, causing area roads to flood. And now more flooding could be on the way.

By the end of day one of the Mongol Derby, Jackson competitor Deidre Griffith finished last behind 46 riders. Eight days later, she, alongside her partner, were the first to cross the line.

The 20 foot by 10 foot metal storage unit is where the majority of Paige Gilbert’s training takes place. It’s nothing fancy, she’ll tell you, but it’s where she’s become a six-time national boxing champion and ranked the first youth in America at 119 pounds.

Yes, we're open: Johnny J's Diner has been a Casper classic through the years

The restaurant has been open at its current location at 1705 E. Second St. since the early 2000s, and when asked by anyone who frequents the diner what’s changed since then, they’ll tell you, "Not much."

The Discipleship Recovery Center will house up to 40 men and 20 women in the "discipleship program," the mission’s one-year addiction treatment program for homeless people.

The candidates recently signed a petition that calls for a major change to the way assessors in Wyoming calculate property tax.

Voters are set to narrow the field of Casper City Council candidates during the Aug. 16 primary.

The center will host a series of special events next week to celebrate its birthday.

The 36-year-old man was a passenger in a side-by-side vehicle that crashed in a rural area east of Shoshoni.

2022 Wyoming State Merit winner Asa Limmer poses for a photo with his first buck. The same animal inspired the idea of building a prion scanner for the 3M Young Scientist Challenge.

The prion scanner diagram as included in Limmer's submission video.