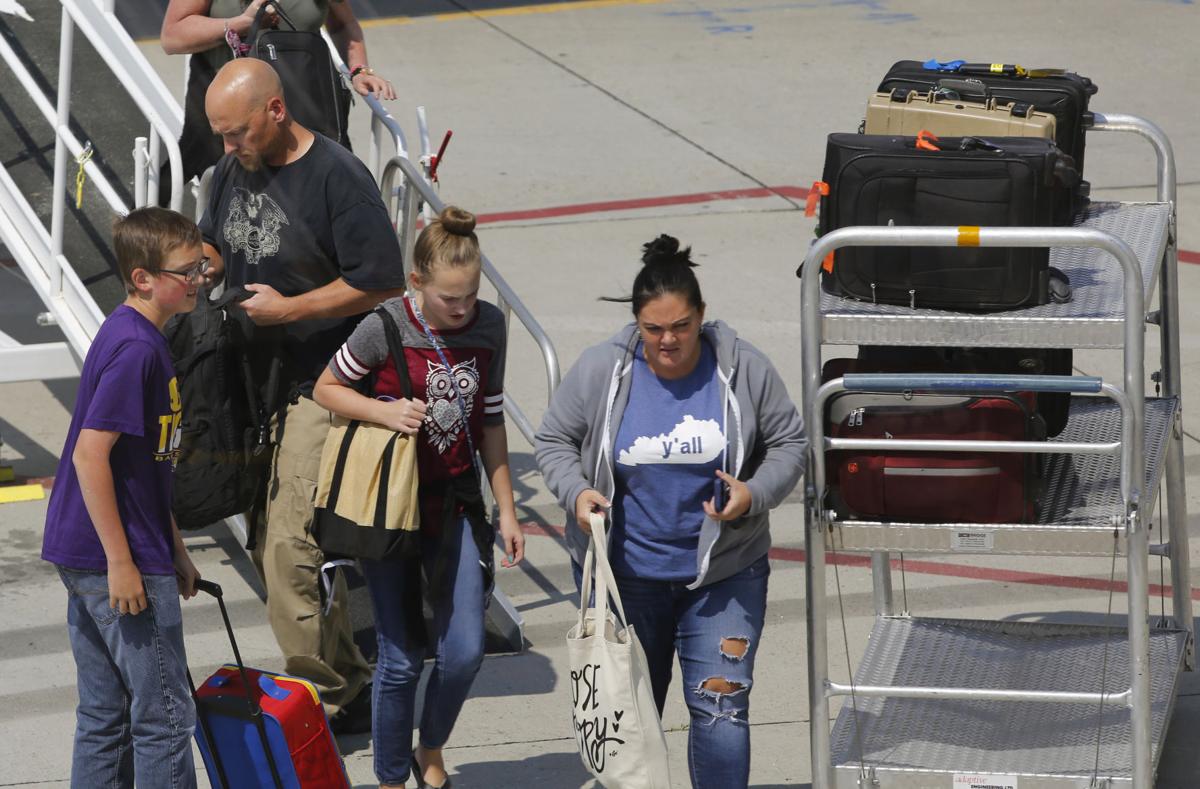 Passengers grab their bags after a flight from Denver on Tuesday afternoon at Casper/Natrona County International Airport. Allegiant Air is ending its twice-weekly flights from Casper to Las Vegas. 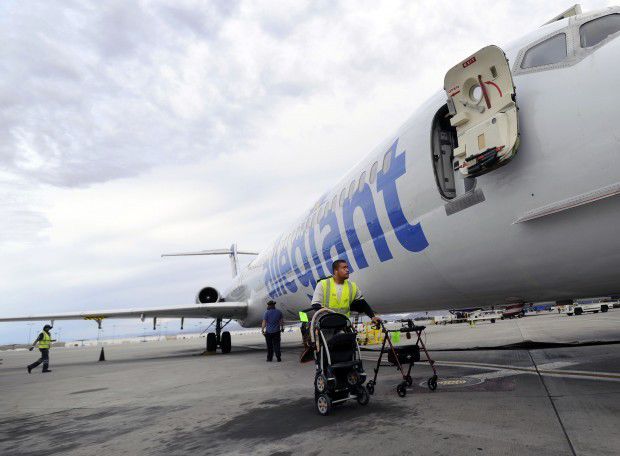 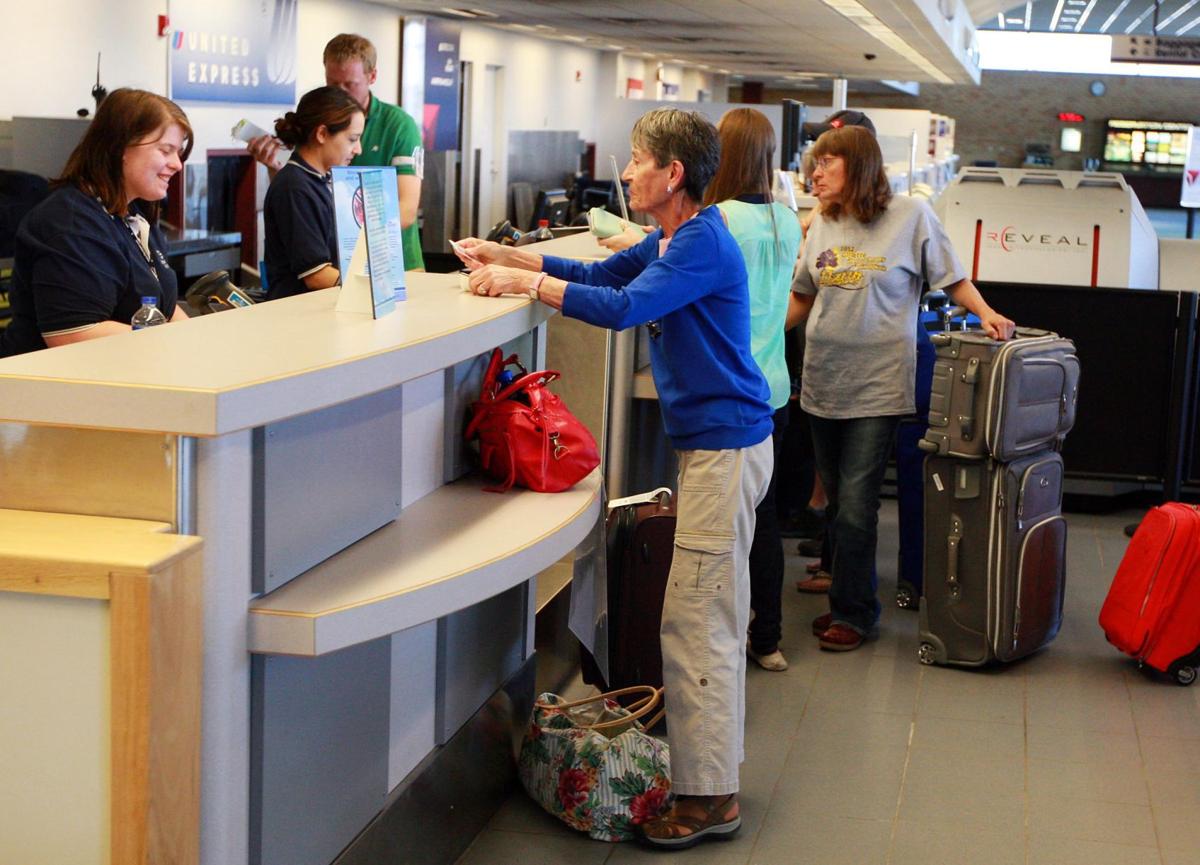 The Allegiant ticket counter at Casper/Natrona County International Airport in 2013. The airport announced Tuesday that Allegiant would be leaving the Casper market, ending its twice-weekly discount flights to Las Vegas.

Allegiant Air is pulling out of the Casper market, ending discount service to Las Vegas and effectively slashing the number of cities served out of the Casper/Natrona County International Airport by one-third.

The bargain airline has been the cause of grim headlines in several small air markets in the country this week as Allegiant announced that it was eliminating service to Youngstown, Ohio, and Scranton, Pennsylvania.

“It was a little bit disappointing because I think we still had a good market,” airport director Glenn Januska said. “It just wasn’t a market that seemed to fit in with the company’s direction.”

The cuts to service in small cities has coincided with recent expansion into larger markets, like Cleveland and Denver, which Allegiant had not historically served.

But Allegiant spokeswoman Krysta Levy said the decision to end service to Casper was not based on an overall shift in the company’s strategy.

“We base all our routes strictly on demand,” she said. Levy cited Allegiant’s recent expansion into Gulfport, Mississippi, as evidence that the airline was not abandoning small markets.

Levy did not know exactly how much Casper sales had declined but said it had likely dropped below the threshold used by Allegiant’s scheduling team to plan routes.

“Whatever it was, it was enough to decide to give it a little break,” Levy said.

Allegiant currently offers two flights per week from Casper to Las Vegas, initially operating on Monday and Friday and more recently on Thursday and Sunday. Service will end on Jan. 1.

The new 10,000-square-foot hangar sits to the left of the main terminal at Casper-Natrona Co…

While overall passenger numbers at the Casper airport dropped during the economic downturn, ticket sales began increasing last February, according to airport officials.

Januska said he helped draw Allegiant to Casper in 2008, with central Wyoming becoming the smallest market served by the carrier. He said it was a challenge to convince Allegiant that the Casper airport served a larger area than one might think.

“It took a while to convince them that our catchment area is bigger than a one-hour drive,” Januska said. “People will drive in Wyoming for a good deal.”

Allegiant’s withdrawal will cost the Casper/Natrona County Airport $26,000 per year in landing and rental fees. Those are important dollars for the airport. For the current fiscal year, the airport’s budget projects revenue outpacing expenses by just $33,000.

The Casper airport is required to provide free parking to passengers. But they don’t make it…

Januska said the airport may see other ancillary losses as a result of Allegiant leaving the market, such as fewer passengers paying for parking or patronizing the restaurant.

Unlike most airports in Wyoming, the Casper/Natrona County International Airport does not subsidize commercial air service through revenue guarantees or receive operational funding from local governments.

RIVERTON — The first thing you notice about Riverton Regional Airport is the free parking. I…

Allegiant’s decision to eliminate service to Casper is likely more about the company’s strategy of frequently changing routes based on fluctuations in demand rather than the overall viability of the central Wyoming market, according to Michael Wittman, an expert on small market air service at the Massachusetts Institute of Technology’s International Center for Air Transportation.

Wittman said that Allegiant’s withdrawal from Casper does not necessarily mean the end of leisure-focused discount air service in the region.

“They’ve shown it’s possible to fill flights from Casper to Vegas,” he said.

While Januska said Allegiant was the only carrier in recent memory to offer specialized discount flights to vacation destinations, Casper has lost regular service to major airline hubs and business destinations over the last decade. In 2009, Delta Air Lines eliminated service from Casper to Minneapolis, following the company’s acquisition of Minnesota-based Northwest Airlines. A year earlier, United Airlines cancelled a trial run of direct service between Casper and Chicago.

Allegiant briefly offered flights between Casper and Phoenix, starting that service in late 2012 and ending it several months later.

Delta and United continue to serve their respective hubs in Salt Lake City and Denver from Casper. Both airlines contract with smaller regional carriers to provide that service.

The impending departure of Allegiant Air from Casper, announced last week, signaled more than the end of popular discount flights to Las Vegas…

Despite President Donald Trump’s budget request last spring to eliminate subsidized air service to Cody and Laramie, it appears that both airp…

Passengers grab their bags after a flight from Denver on Tuesday afternoon at Casper/Natrona County International Airport. Allegiant Air is ending its twice-weekly flights from Casper to Las Vegas.

The Allegiant ticket counter at Casper/Natrona County International Airport in 2013. The airport announced Tuesday that Allegiant would be leaving the Casper market, ending its twice-weekly discount flights to Las Vegas.