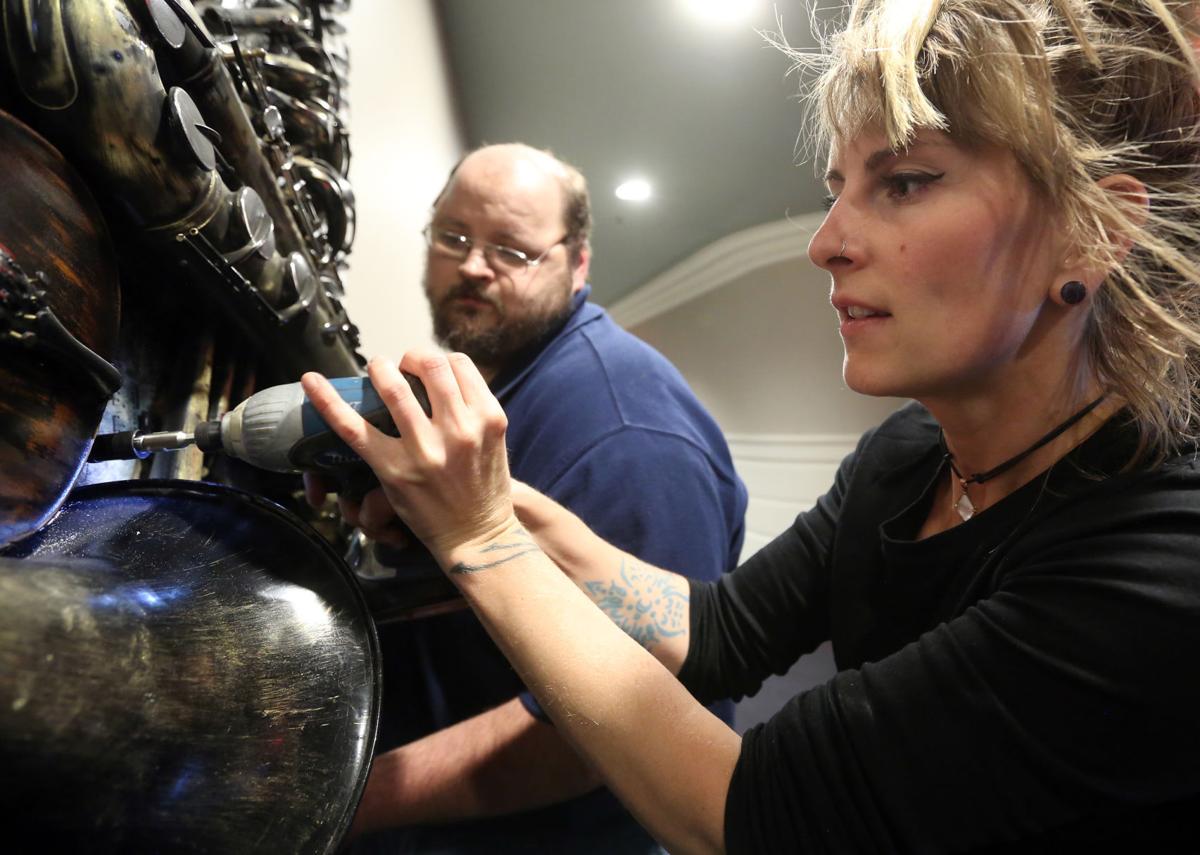 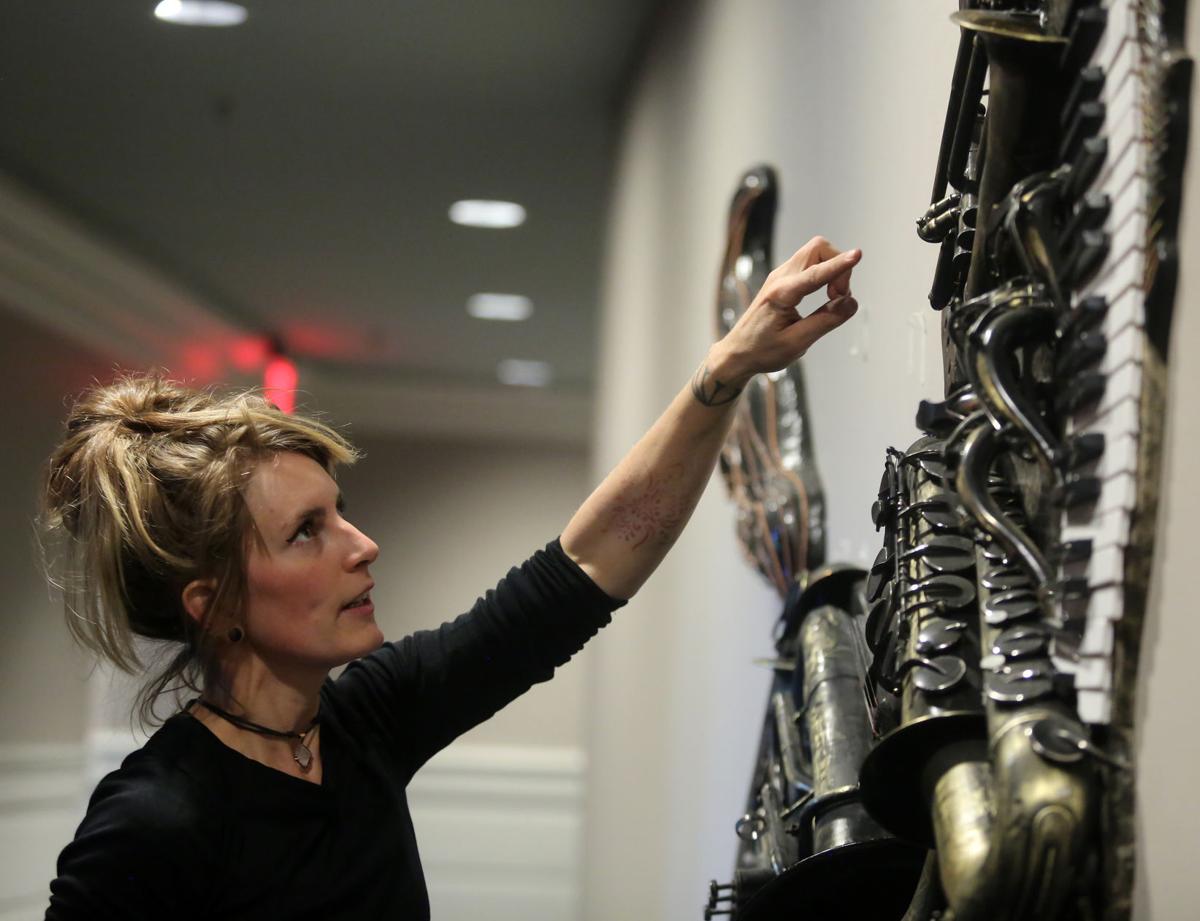 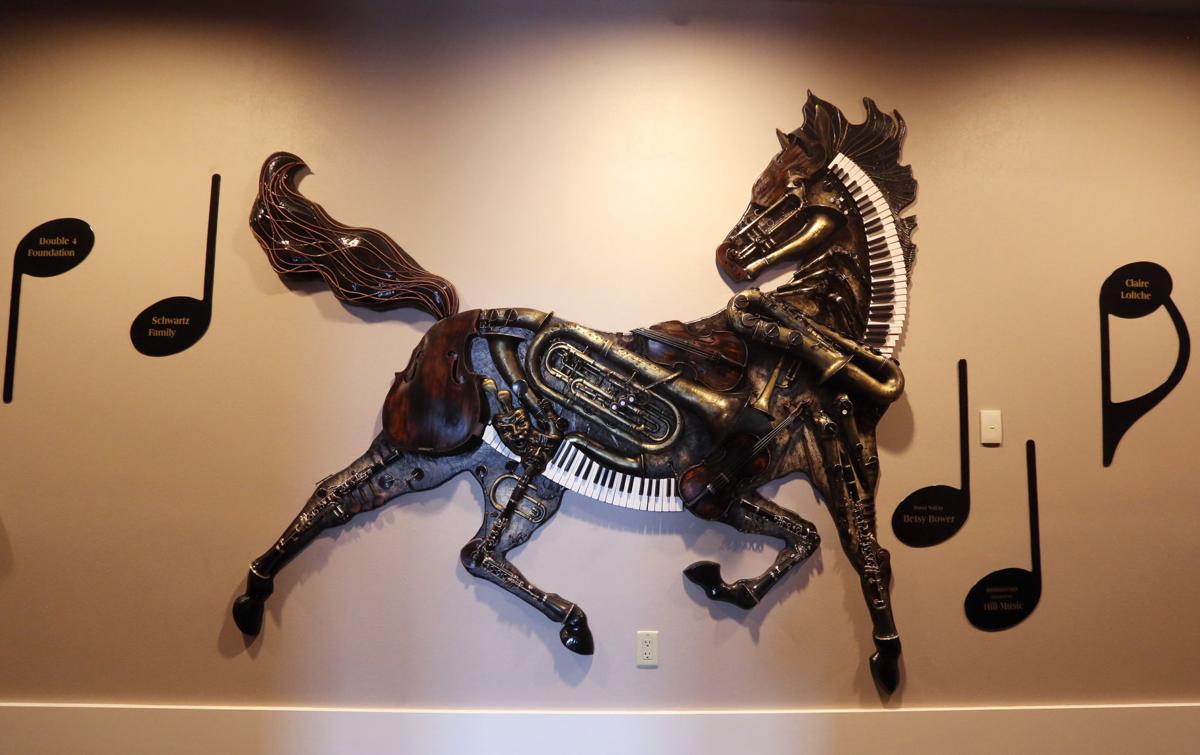 Piano, bass and guitar strings stream from the mane and tail. Some 60 musical instruments arranged between make up the hanging mustang sculpture. A cello scroll forms its nostril. The end of a horn stretches in an arc for the lower jaw, while a trumpet and the front panel of a violin form the top ridge of the head.

The horse gallops on clarinet legs. A keyboard runs the length of its belly and neck.

Casper metal artist Betsy Bower spent 300 hours creating the sculpture from at least 60 musical instruments. The artwork hangs between the inner doors of the 1924 John F. Welsh Auditorium in Natrona County High School. It names the major donors for the restoration completed last fall and the lights and equipment used in the theater and classes at the school. Musical notes on either side of the sculpture bear the names of the major donors for the project.

The original plan was a string of music notes when Bower was hired to create the auditorium’s donor wall. But that idea didn’t inspire her. So she proposed one that did: Create the school mascot out of musical instruments.

“They made this phenomenal new auditorium, so I felt like, you know, that they care about this place and it needs to show,” Bower said. “It needs to match it in a way.”

The auditorium for generations has been a hub of performing arts not just for the school, but the community. Bower’s grandparents and two brothers attended NCHS, and she’s been to many plays and symphony concerts in the auditorium.

So she wanted to create something only she could make as a sculptor. She started the project in April.

First, she had to find enough discarded musical instruments, most of which were provided by Hill Music Company. Then she set to work on a project unlike any she’d ever done before. Creating the shape of the mustang’s legs stumped her at first, until she sculpted foam backing under the clarinets. Affixing the strings to the foam proved another challenge, but also another chance to learn, she said.

The piano keys lend a harmonious balance to the complex piece, drawing the eye through the sculpture, she said. The original idea of the musical notes surrounds the hanging sculpture with the donors’ names lilting across the wall.

“It feels so good, especially since it turned out as I wanted it to turn out,” Bower said.

Amid the instruments nestles a set of theater masks that belonged to former theater teacher and auditorium namesake John F. Welsh. Theater teacher Zach Schneider found the masks in an old trophy case.

“It had ripped off of the frame and was unusable,” he said. “So I thought we could put a little bit of him in here too.”

Schneider was involved in the fundraising campaign, which raised about half a million dollars, and the committee that planned and commissioned the donor wall. The fundraising is ongoing to maintain the auditorium and arts education there, with donors of $10,000 named on a note and $1,000 for a name on a seat, he said.

The sculpture now hangs in the space where he teaches and directs school theatrical productions.

“When we started this project, the one thing I wanted people to see was the celebration of art that happens here from the moment they walk in,” Schneider said. “But this is so much better than I even expected.”

What started out as a search for an original birth certificate would eventually uncover details about the 80-year-old woman’s birth family.

The department will only conduct contact tracing for those confirmed positive within six days of testing.

There will not be a Christmas parade through downtown Casper this holiday weekend, but organizers are planning a festival instead.

Karin East is the regional director of sales for Regency Hotel Management and is based in Casper at the Ramkota Hotel. For at least a decade, …

The hostile crowd repeatedly interrupted and heckled doctors and politicians who were trying to discuss the surge in coronavirus cases in Natrona County. .

Merry GIFTMAS kicks off on Small Business Saturday this weekend and runs for one week.

Talkin' with Sal: It's so easy to do

There are so many ways to help without leaving the house or putting your safety at risk.

Pedestrian remains hospitalized after being hit by car in Casper

Casper police continue to investigate a collision involving a pedestrian and car that left one man with serious injuries.

The purpose is to ensure Wyoming families in need have a Thanksgiving meal.