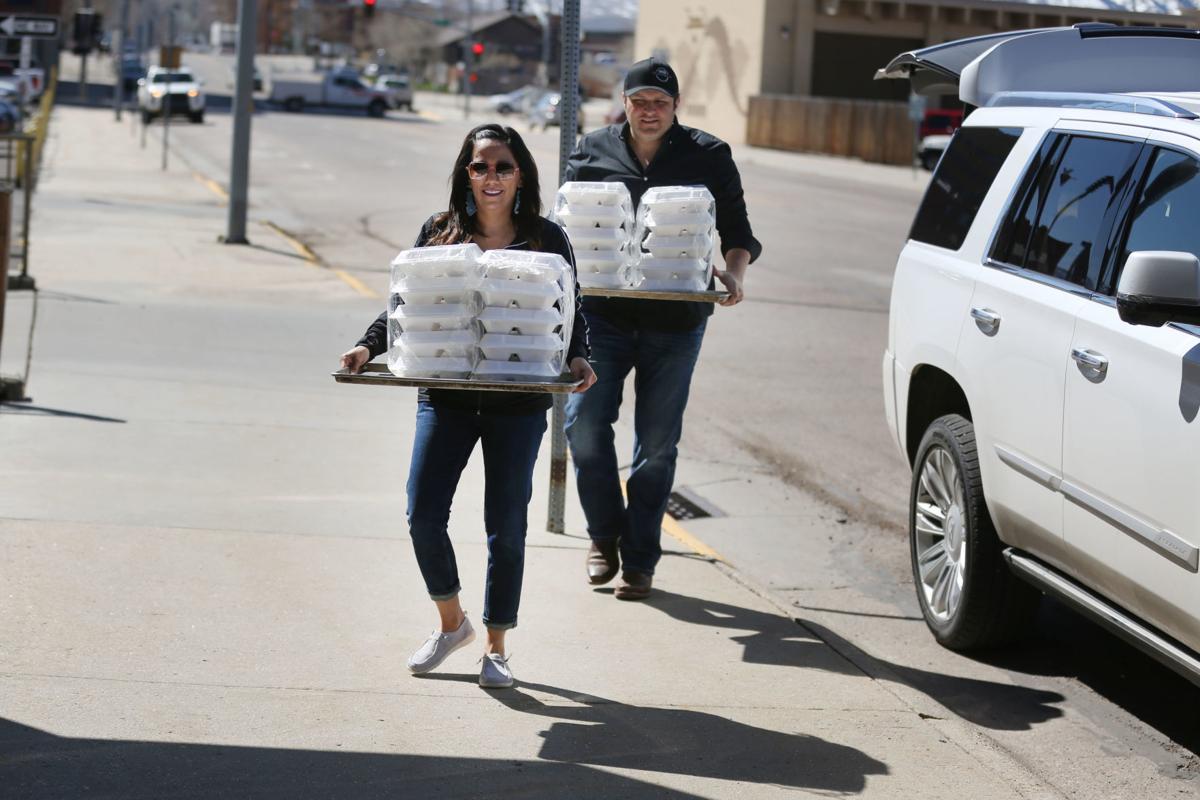 Veronica Mundy and Cory Poulos with Occasions by Cory deliver free lunch to the Casper-Natrona County Health Department office on Thursday in Casper. The delivery is part of the "Feed the Front Line. Casper" initiative that delivers meals to health care workers, law enforcement officers and others responding to the COVID-19 pandemic. 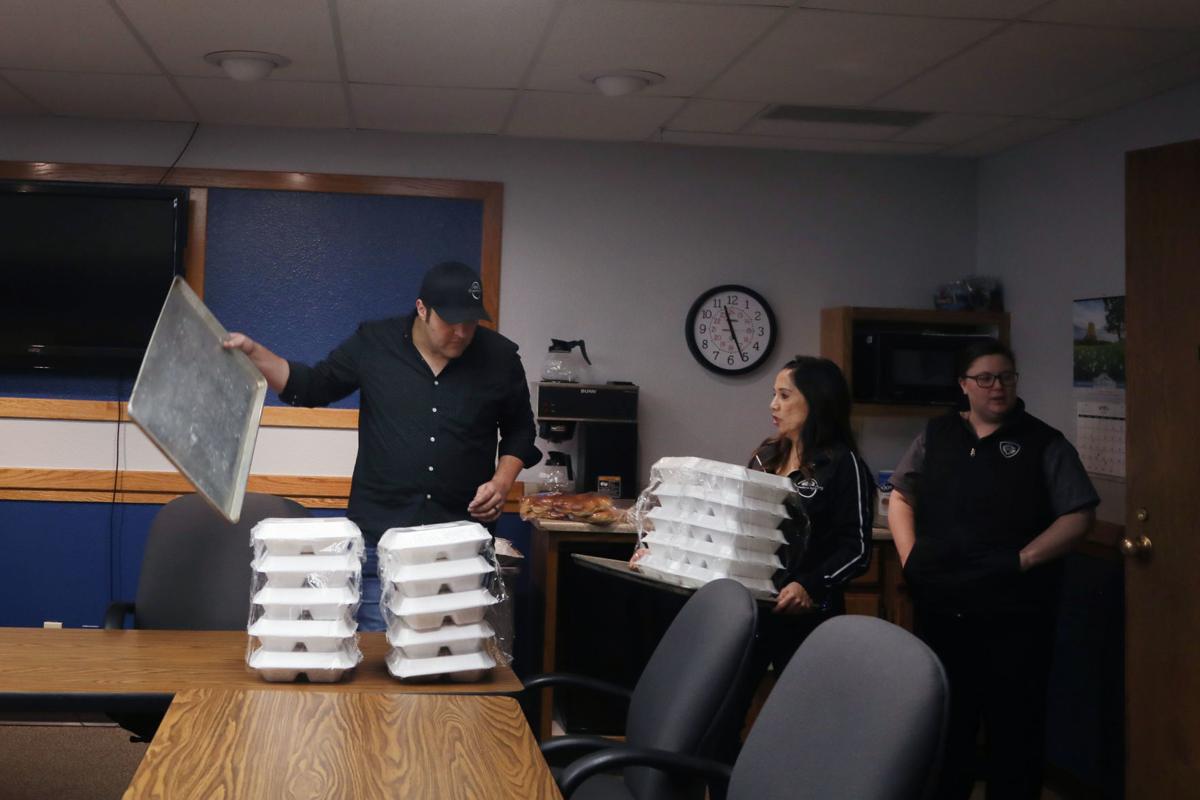 A team of local businesses have begun to provide delivered meals to crews of health care workers, grocery stores, first responders and others as part of an effort called “Feed The Front Line. Casper.”

Coldwell Banker The Legacy Group, Occasions by Cory and The Cottage Cafe launched Feed The Front Line. Casper to “provide meals for our healthcare professionals, first responders and other frontline heroes throughout the COVID-19 pandemic,” while supporting local restaurants and businesses, according to an announcement from the group.

The businesses combined individual efforts that each of the three had recently begun into Feed The Front Line. Casper. By the end of Sunday, the project will have delivered 650 meals and even 100 cookies, said Kate Kalinowski with Coldwell Banker The Legacy Group.

Community donations support the meals from The Cottage Café, Occasions by Cory and other several other local food and beverage establishments.

“So we just saw that strength in numbers,” Kalinowski said. “And I think it was just a leap of faith for all of us, not knowing what it was going to look like or where the money was going to come from. But it was just an awesome opportunity to see the generous hearts of the people of Casper and how Casper really does come together.”

Kalinowski coordinates the schedules and other logistics, although the project is a group effort. Her husband and co-owner of their business reached out to a radiologist friend at Wyoming Medical Center with his idea to show health workers appreciation and help local businesses. Kalinowski took the helm of the project and began collecting donations and calling restaurants to deliver the meals.

Occasions by Cory and The Cottage Café had already begun similar efforts, so she contacted both to see if they’d want to combine forces to reach more people and to not duplicate efforts.

“You know, our goals were the same: to show appreciation for the frontline workers and help support local businesses.”

A mutual friend connected Kalinowski and The Cottage Cafe after seeing the restaurant’s Facebook post about providing meals while the restaurant is closed to the public, said Leslie Colburn, the restaurant’s co-owner. She was sitting at her kitchen table the next day thinking, wondering how she was going to organize everything when Kalinowski called.

“So we just thought, ‘Let’s work together and coordinate this with our different strengths,’” Colburn said.

Occasions by Cory owner Cory Poulos, meanwhile, saw a news special featuring a New York City restaurant delivering meals to workers and decided to start a similar effort during April. Kalinowski called him within 24 hours of that decision and they joined forces.

“And people just jumped on and been so supportive,” he said.

Occasions by Cory had just expanded into a downtown venue for weddings and other events, and Poulos was gearing up for what he hoped would be the biggest year yet as a full-service event company, which includes catering.

“And we came to a screeching halt essentially overnight on March 15th,” he said. That’s when schools closed across the state to slow the spread of the coronavirus.

“The next week and a half was literally just call after call or email after email of canceled events, because they had to.”

The meal-delivery effort began as putting “the cart before the horse” in the sense of committing and hoping funds would come in, he said.

“So, I mean, it really was truly a leap of faith. I mean, we didn’t have anything else going on. And I knew I couldn’t sit around for a couple of months and just dwell on things, that we had to kind of jump into action and do something.”

When he decided to deliver meals for the month of April, he figured he’d have to call it quits if donations didn’t come after at that point.

“But the good news is that’s not the case. We’re going to be able to expand what we’re doing.”

He hopes to increase to 100 meals a day and include evening shifts. The Cottage Café are also hoping to include weekends to not leave anybody out, Colburn said. The website gives options for people to suggest delivery spots and become involved, according to Kalinowski.

Many businesses and individuals have donated, including Justin Kinner who’s helping with his 24-hour run fundraiser. The effort by Friday has received donations from as far away as New Zealand, Colburn said.

It’s helps The Cottage Cafe keep a semblance of payroll during these times, she added.

“And so this will allow us also to help our employees out during this time, which will be really good. It’s just it’s a win-win.”

Poulos hopes the momentum will continue so the deliveries can as well. The goal is to continue through the crisis as long as donations make it possible, Kalinowski said.

The effort is a way for the community and the partners to help others, Colburn said. Her husband does the cooking, “and so he’s able to contribute in a way that is right in line with what he loves to do.”

With many livelihoods put on hold and every business affected, Poulos also feels fortunate.

Find out more at www.feedthefrontlinecasper.com

To donate to Occasions by Cory's efforts, go to occasionsbycory.com/feed-the-front-line or donate directly to The Cottage Café’s efforts, at gf.me/u/xubukf or directly to the Casper Local Restaurant Fund at https://venmo.com/Kate-Kalinowski-2

Find out more at Feed The Front Line. Casper on Facebook

Cory Poulos never imagined his hobby would grow into a full-service event company, or that Occasions by Cory would expand in just over five years into its latest development: a downtown Casper event space.

Poulos moved his business from a smaller space and in December opened in the 21,000-square foot building on Wolcott Street.

“I never set out to do what I'm doing,” he said. “Six years ago, well, even four years ago, I mean, if somebody would have asked me where I would be today, I would never have thought that this would have been something that was feasible.”

Maggie King is one of many very small restaurant owners in Casper. In late March, she changed her Grab and Go menu to reflect meal bundles. Wh…

Editorial board: There are ways to help, even if you're isolated at home

The Star-Tribune editorial board offers suggestions on ways we can all help amid the pandemic.

Community provides Easter meals and goodies for families in need

The Boys & Girls Clubs of Central Wyoming partnered with philanthropists, Eggington's restaurant and others to distribute 450 meals to local families for Easter weekend.

Distilleries in Mills, Sheridan, Cheyenne, Alpine, Kirby and Jackson will join in the effort to address shortages amid the pandemic.

The latest: Coronavirus in Wyoming — April 10

The situation surrounding the coronavirus outbreak continues to develop quickly. To keep you up to speed, the Star-Tribune will update this page throughout Friday with the latest news regarding coronavirus in Wyoming.
Casper

School district, nonprofits and businesses rally to provide meals to students while out of school

For some students, the only certain source of food each day comes from school. With coronavirus causing closures, groups have stepped in to help their neighbors in need.

When Gov. Mark Gordon announced Friday the closure order would be extended until April 17, many restaurateurs who have managed to adapt to an interim way of life heaved a sigh of exasperation and pressed on.

The order will extend existing closures through at least April 17, and gatherings of more than 10 people will remain prohibited.

The latest: Coronavirus in Wyoming — April 11-12

The situation surrounding the coronavirus outbreak continues to develop quickly. To keep you up to speed, the Star-Tribune will update this page throughout the weekend with the latest news regarding coronavirus in Wyoming.

Veronica Mundy and Cory Poulos with Occasions by Cory deliver free lunch to the Casper-Natrona County Health Department office on Thursday in Casper. The delivery is part of the "Feed the Front Line. Casper" initiative that delivers meals to health care workers, law enforcement officers and others responding to the COVID-19 pandemic.