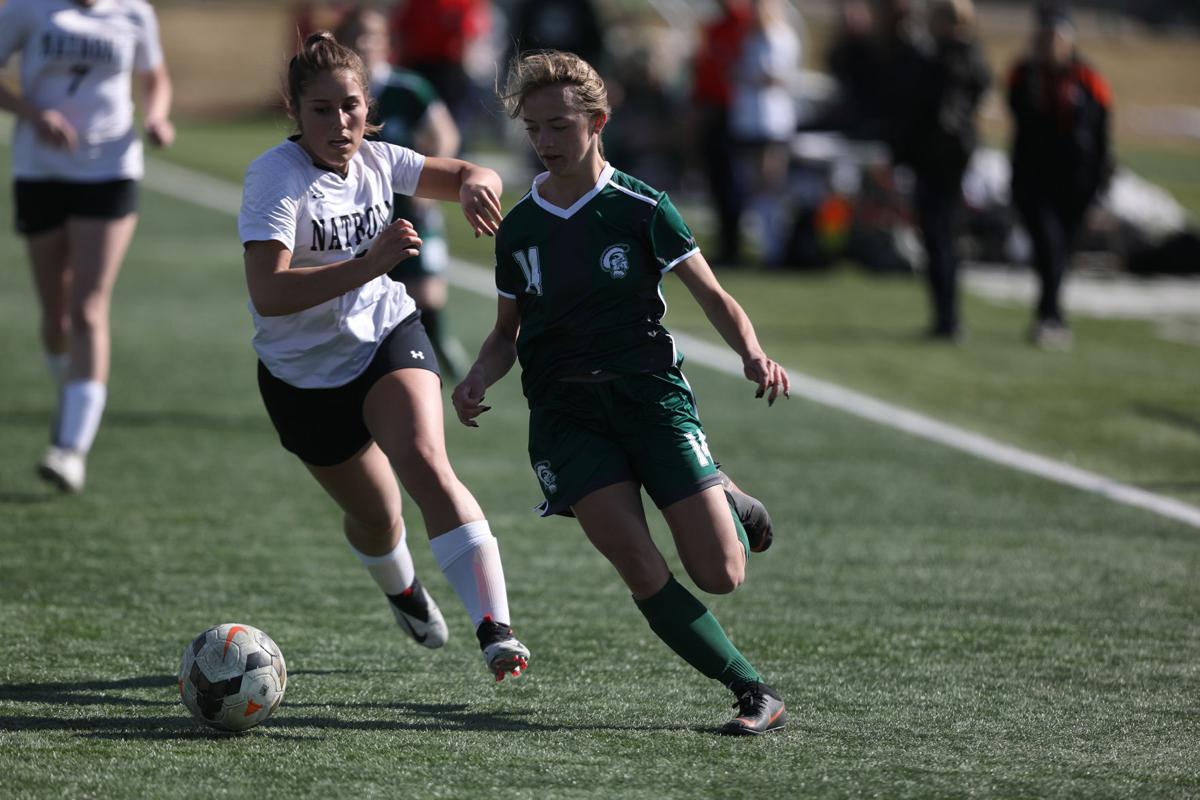 Natrona County's Ellyce Brownell and Kelly Walsh's Hannah Holmberg fight for control of the ball in the annual Casper Cup  at KW's Tom Staffileno Activity Complex on Thursday in Casper. 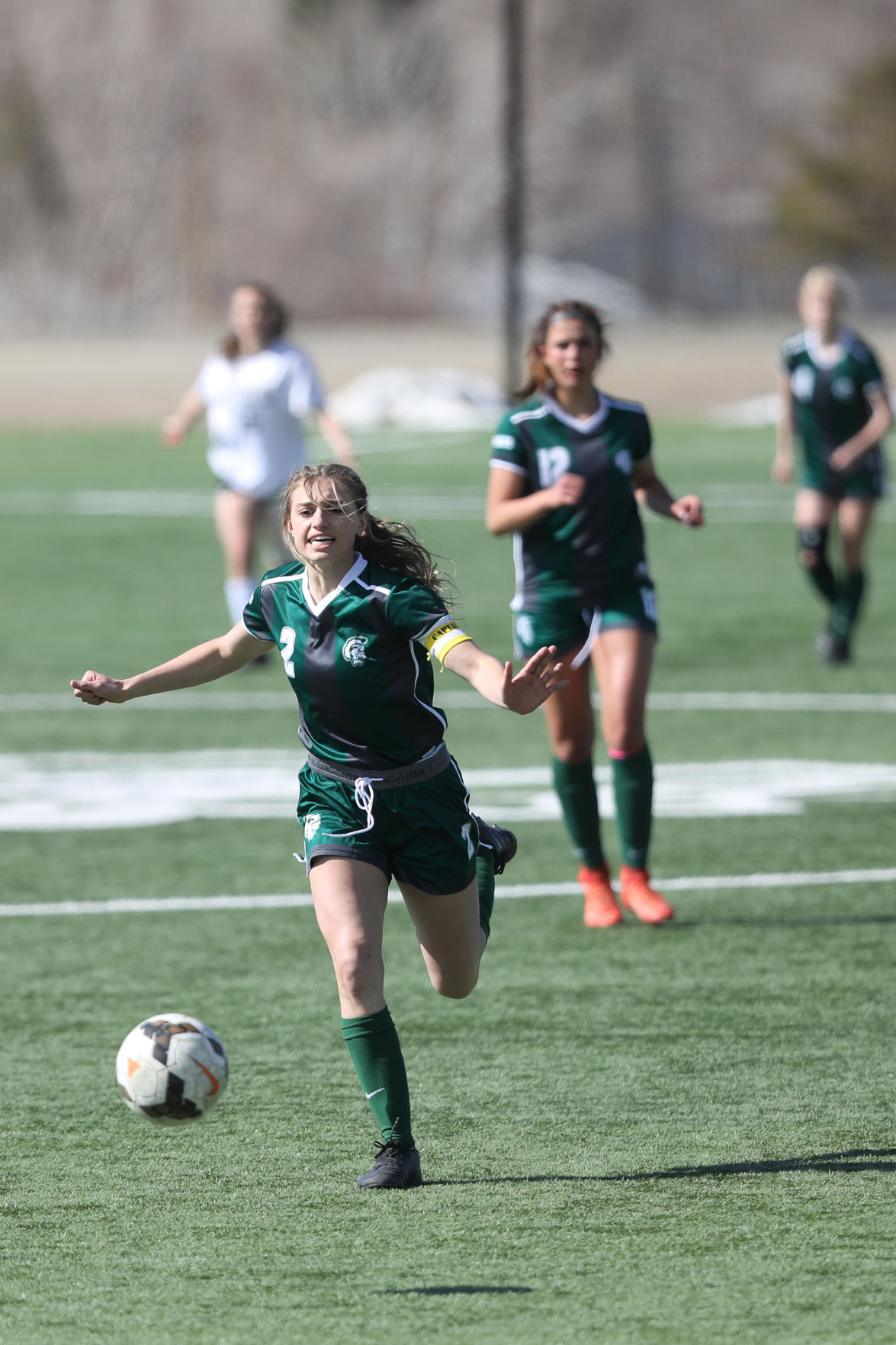 Barrett Lloyd of Kelly Walsh rushes to regain control of the ball in the Trojans' game against Natrona County in the annual Casper Cup on Thursday in Casper.

This time, the Kelly Walsh defense wasn't going to get beat. Nine days after allowing Natrona County's Kylan Campbell to get behind their last line of defense and score the Fillies' only goal in what turned out to be a 1-all draw, the Trojans shut down the speedy freshman and the rest of the Natrona County offense to earn a 1-0 win Thursday at KW's Tom Staffileno Activity Complex.

"We just had to keep communicating and stay connected on defense," Kelly Walsh senior defender Barrett Lloyd said. "We're a really close team and we're just learning to trust each other more and more."

The Trojans (4-2-1 Class 4A West) limited the Fillies to just three shots on goal, all in the second half, and KW senior goalkeeper Alyssa DePoorter rarely had to move off her line to make a save.

The Kelly Walsh defense, combined with sophomore Hannah Holmberg's goal in the 14th minute allowed the Trojans to win the annual Casper Cup for the fourth consecutive time. Kelly Walsh has been in possession of the traveling trophy since 2017.

"Our defense didn't give them anything," Kelly Walsh head coach Jerry Realing said. "Our whole defense played good, but I thought Barrett Lloyd was really solid in the back."

The teams traded field position early until the Trojans began to take control, winning 50-50 balls and mounting attacks that had the Natrona County defense on its heels. Kelly Walsh finally made it pay off in the 14th minute off a set piece. Setting up on the far post, Holmberg was able to get her left leg on the indirect kick and push a shot past Natrona County senior keeper Hannah Trumbull.

"Hannah was in a great spot," Realing said. "She really helped us in breaking down their defense with her speed on the outside. She is someone who is making great strides as the season has gone on."

Kelly Walsh continued to apply pressure to Trumbull and the Fillies' defense for the rest of the game, but was unable to add an insurance goal. The Trojans came close later in the half when they had three shots in the box, but two were stopped by Natrona County defenders and the third clanged off the frame.

In the 70th minute, Trumbull made a diving save to her right to rob Paige Hill of what looked like a sure goal. Trumbull finished with 10 saves.

After the save, and after Trumbull had booted the goal kick down the field, Realing walked toward the Natrona County keeper and shouted his approval.

"We should have had a second goal," Realing stated, "but Hannah Trumbull came up with one of the best saves I've ever seen on a point-blank shot. I give her a lot of credit."

In the end, though, the Fillies (4-2-1 4A West) weren't able to solve the Trojans' defense. As a result, the teams are tied in the conference standings behind both Rock Springs and Jackson.

And the Casper Cup can be returned to the Kelly Walsh trophy case.

SHE SAID IT: "We just had to keep communicating and stay connected on defense." -- KW senior defender Barrett Lloyd.

ONLINE: The Kelly Walsh-Natrona County boys game ended after the Star-Tribune press deadline. Go to trib.com for story and photos.

Motorcycle crash kills one in Casper

Officers found one person near a wrecked motorcycle. That individual died at the scene.

Student seriously injured after being struck by car, trapped underneath

A student was taken to a hospital with serious injuries, and is reportedly in stable condition.

What’s your take on the Supreme Court’s position — should officers be able to extend a traffic stop past its original purpose? Do you forfeit your right to privacy the moment a cop decides to pull you over?

The event is in celebration of National Police Week and includes free food, games and giveaways.

The tax would be in addition to the state’s 4% sales tax, or 4 cents on a dollar, and the county’s existing “1 cent” tax which funds things like public buses, police cars and library books.

Talkin' with Sal: The War is beautiful

Brew Fest is set for June 26 from 1-6 p.m. at David Street Station. While the event is all ages and free to enjoy, adults 21 and over can purchase tickets in advance for unlimited craft beer tastings for $30.

The eventual winner of the contest will have his or her art displayed on the Google homepage. Public voting closes Friday.

Talkin' with Sal: No service

I discovered that for the entirety of the 46 miles from Mule Creek Junction to Lusk, there is no cell service. Just miles and miles of miles and miles, as the friend frequently opines.

Natrona County's Ellyce Brownell and Kelly Walsh's Hannah Holmberg fight for control of the ball in the annual Casper Cup  at KW's Tom Staffileno Activity Complex on Thursday in Casper.

Barrett Lloyd of Kelly Walsh rushes to regain control of the ball in the Trojans' game against Natrona County in the annual Casper Cup on Thursday in Casper.