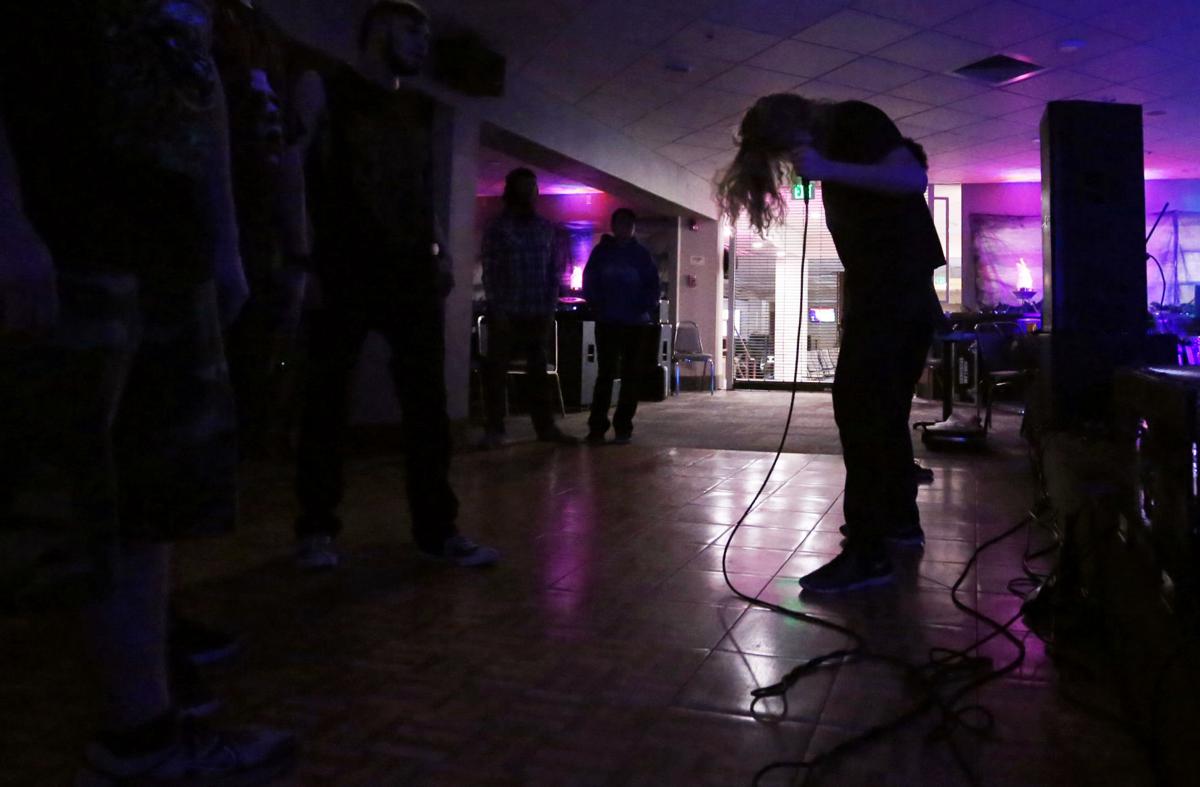 Vocalist Michael Olson performs with the metal band Genocide Method during a show at the Sky Terrace Lounge inside Casper/Natrona County International Airport. The lounge’s owner and manager started hosting live music to attract people from town who are looking for a bit of nightlife, not just travelers passing through the airport. 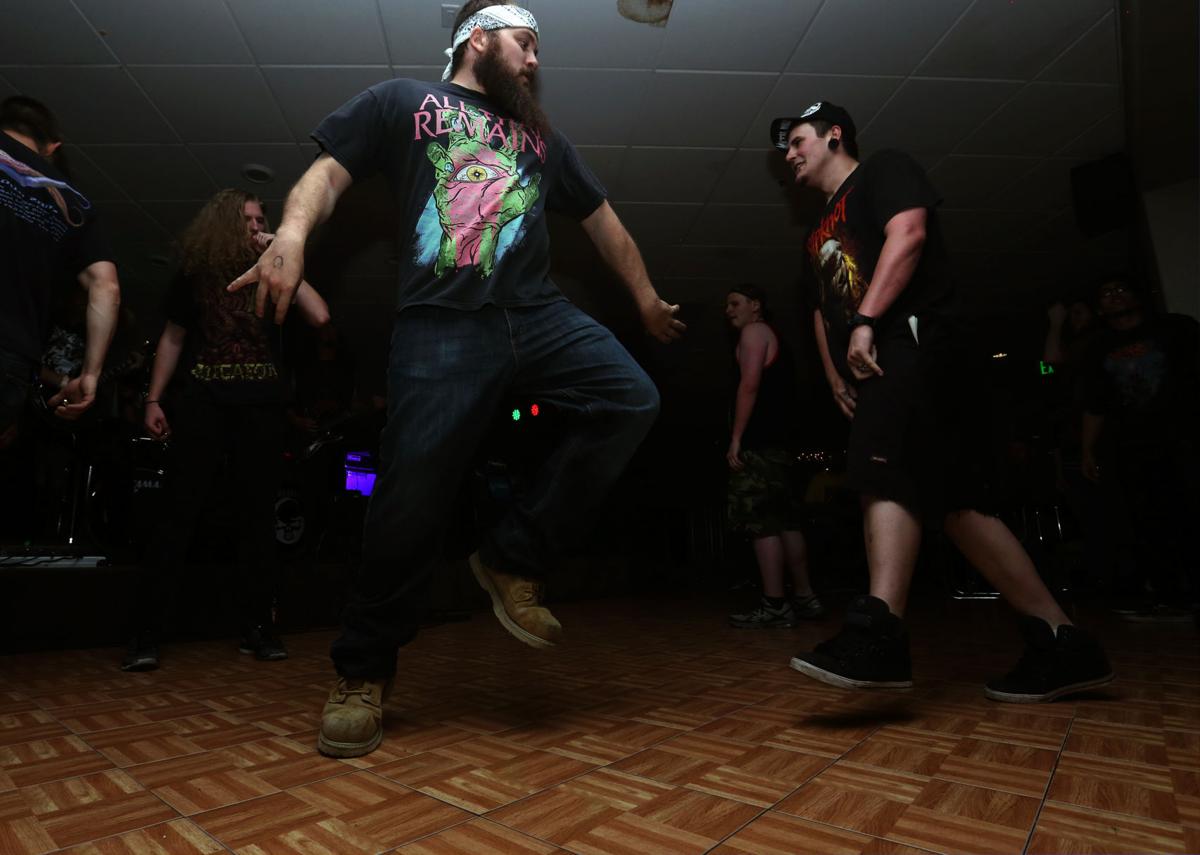 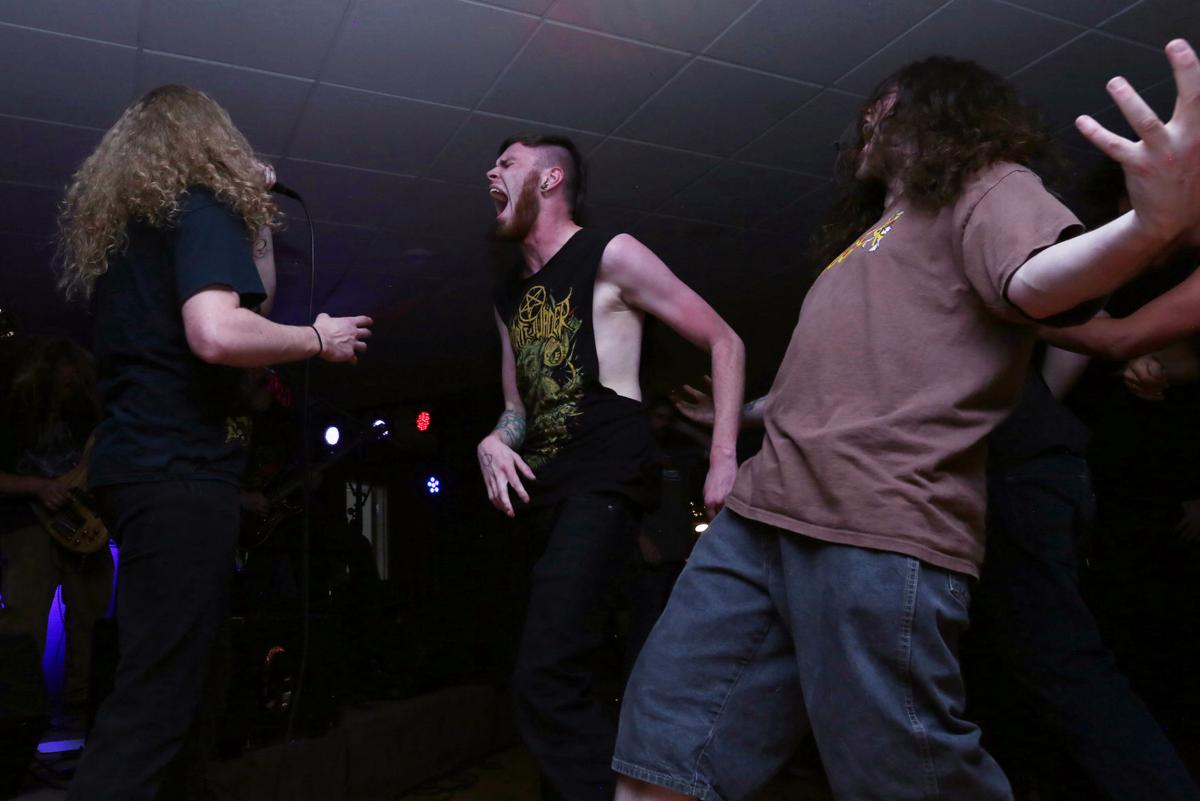 Austin Oswell, center, and Steve Thomas, right, enjoy the Genocide Method set during a metal show at the Sky Terrace.

It is 5:22 p.m. when the soothing voice on the public address system of the near-empty Casper-Natrona County International Airport informs passengers that their flight to Salt Lake City can now begin boarding.

The casually dressed travelers calmly file onto the boarding ramp. Their glossy gazes shift from the gray carpet to the Sky Terrace Lounge on their left, catching sight of teenagers and 20-somethings hauling speakers and musical gear to a two-foot high stage.

Passengers board their plane, sitting idly with seat belts fastened while awaiting take-off. A horde of mohawked and long-haired men in torn denim line the stage with instruments and clutter the salad bar with shirts and stickers. They are also waiting for the flight’s departure.

The musicians stand on stage, staring out the windows of the lounge that overlooks the runway. The plane rolls along the tarmac before finally taking flight.

It’s 5:44 p.m. and the final flight out of Casper has departed. A hand gesture from bar manager Melissa Cackler-Garduno, tall cup of coffee in hand, signals three musicians to take their stations on the stage.

Sitting eight miles west of downtown Casper, out past the communities of Mills and Bar Nunn, is the airport. And tucked on one side, not far from the security line, is the Sky Terrace Lounge. Like a lot of airport lounges, the Sky Terrace hosts live music. But few transform into a full-on concert venue.

“The noise levels on a pre-flight can be a problem,” Cackler-Garduno says. “I try to schedule this after the outgoing flights.”

It was the vision of Debbie Dallman, who bought the lounge and hired her friend, Cackler-Garduno, just a month later to manage. They play in a Christian rock band together and have always gravitated towards music.

“My idea was to get music in here, so we basically bought a place where we could play music and learn how to pour beer,” Dallman says. “So we started with the music and that’s just at the heart of what we do.”

The two operators beam when they go through the venue’s calendar, with three shows a week from April through July. When they opened, Dallman and Cackler-Garduno had to contact artists about the possibility of hosting a show. Now three years later, the bands call them — country, metal, blues, punk, jazz and everything in between.

The two women see themselves just as the outcast musicians do.

Tonight, two metal bands and a punk outfit are on the bill. During sound check, a guitarist takes the stage and strums a note so loud that the shades shake and the alcohol behind the bar ripples in the bottles.

Posters on the columns and walls advertise the Wyoming Blues & Jazz Society, but this night is for the outcasts of Casper. The show, almost as advertised, is Metal In The Sky.

Cackler-Garduno calls over a heavy-set man with a bushy beard. They gather the security for the night’s show in her office to go over protocol. They decide who will be stationed at each entrance to check identification and take ticket money.

The man introduces himself as Nate Free, the bassist for headlining act Genocide Method. Free grew up in Casper and graduated from Natrona County High School before moving to Fort Collins, Colorado. He returned to his hometown to help revive the small metal scene that sculpted him.

“I figured there aren’t really shows that happen around here, especially metal, with any frequency whatsoever,” Free says. “So I figured ‘What the hell’, threw the guys in the van, got out to play somewhere new, give the people a show that’s kickin’ and get the airport some love.”

The musicians at the airport say the number of music venues in Casper has been on the decline and those that do host live music typically favor the conventional country and bluegrass more typical of Wyoming. The metal scene suffers as more and more of its musicians leave Central Wyoming for opportunities elsewhere.

“I have a lot of friends still in Casper that play metal and every time I talk to them it sounds like the scene here is trying to die and that’s not cool with me,” Free says. “This is where I started, it can’t go away.”

So the outcast musicians connected with the outcast venue and the airport became a fitting location.

So the punks, outsiders of the music scene through attitude and attire, and the county airport, sitting isolated along the highway and unique in its own way, suddenly became perfect partners.

Sky Terrace Lounge doesn’t attract many local patrons, partly because of geography and costs. So the owners started to offer a local’s discount on food and drinks in order to attract Casperites to the lounge.

When passengers land in Casper and come off their plane greeted by live music, some are enticed and postpone the rest of their plans. Because most travelers would not have stopped otherwise, the live music has increased crowds.

Spectators file into the lounge, as the curtains are drawn and Cackler-Garduno quickly escapes to her office to change out of a bright pink shirt in favor of a black metal band shirt. The show is about to begin.

Casper punk band North Grant opens with spirited, springy power chords. The sound guy monitors levels on his iPad from the audience, flanked by his peers in long hair and wide ear gauges.

The only person in the crowd not confined to the all-black metal image is a middle-aged man in a jean jacket and trucker hat who holds his drink and leans against a column, his eyes watching the stage and the reckless crowd.

The audience crowds the stage even more as North Grant exits and local metal band From Ash To Stone begins. Audience members head-bang as the quintet fills the stage and strums their fast-paced, percussion-centric metal.

“I heard they had music out here,” the band’s vocalist Austin Oswell remembers thinking when they were first approached to play at the airport. “It was like ‘Do you guys really know what we’re bringing to this place? Because it’s definitely mosh material.’”

Night has fallen and the lights lining the runway glow while the audience in the lounge materializes into the night’s first mosh pit. Arrival and departure times show on the bar’s television as an audience member asks the bar manager where the bathroom is. She directs them through the airport: “by the runway, on the right near the gift shop.”

From Ash To Stone ends their set and thanks the airport and its staff for hosting the event. Not all have time to fill their drinks before Fort Collins’ Genocide Method, with Free on bass, starts the final set of the evening.

By the midway point, Cackler-Garduno finishes her coffee and pours herself a beer. The mosh pit — now including the members of the first two bands — grows in front of the stage. The lights along the tarmac glow multiple colors on the other side of the windows, almost in time with the music.

“You guys have some great local music and you represent,” vocalist Michael Olsen tells the crowd.

Fans glisten in beer and sweat as the show ends, almost resembling passengers who have endured an hours-long layover in their exhaustion. Gates close off the Sky Terrace from the rest of the airport until the morning. Bartenders shoo away the remaining patrons at the bar, telling them to finish their drinks and walk towards the side exit near the lounge’s parking lot.

Outside, the band members take a moment to reflect on the show before loading equipment and swapping stories and cellphone numbers over cigarettes.

“That was so awesome,” North Grant drummer Joshua Wingrove says. Everyone concurs.

For the first time in the night the musicians and their friends are silent, staring out towards the runway just behind a chain-linked fence. The hypnotic glow of the signaling lights subdues everyone.

Smoke began to appear near the tracks around 11:20 a.m. on Thursday. At least two Casper Fire-EMS trucks responded to the scene.

Mills is inviting the community to a day-long 100th Anniversary Summer Fest on Saturday, shutting down a section of Wyoming Boulevard between Yellowstone Highway and 13th Street to do so.

Chattin' with Sal: NCHS principal to be Pinedale super

Shannon Harris is moving on after six years as principal at Natrona County High School.

Electric scooters could be coming to Casper. But some laws need to change first.

Once again, Casper is considering making the one-way streets running through downtown into two-ways.

Toby Keith is bringing his "Country Comes to Town Tour," to the Ford Wyoming Center on Oct. 17. He will be joined by Colt Ford and Wyoming's own Chancey Williams.

Vocalist Michael Olson performs with the metal band Genocide Method during a show at the Sky Terrace Lounge inside Casper/Natrona County International Airport. The lounge’s owner and manager started hosting live music to attract people from town who are looking for a bit of nightlife, not just travelers passing through the airport.

Austin Oswell, center, and Steve Thomas, right, enjoy the Genocide Method set during a metal show at the Sky Terrace.