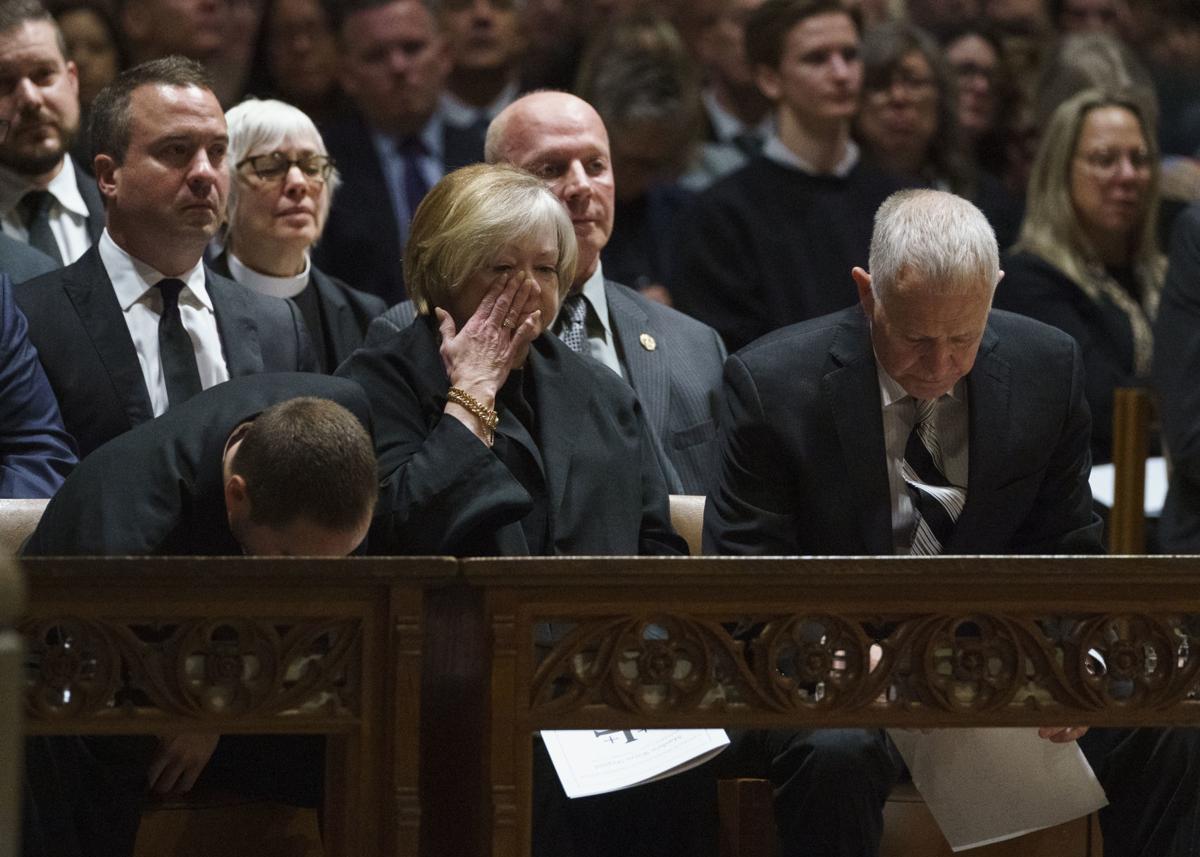 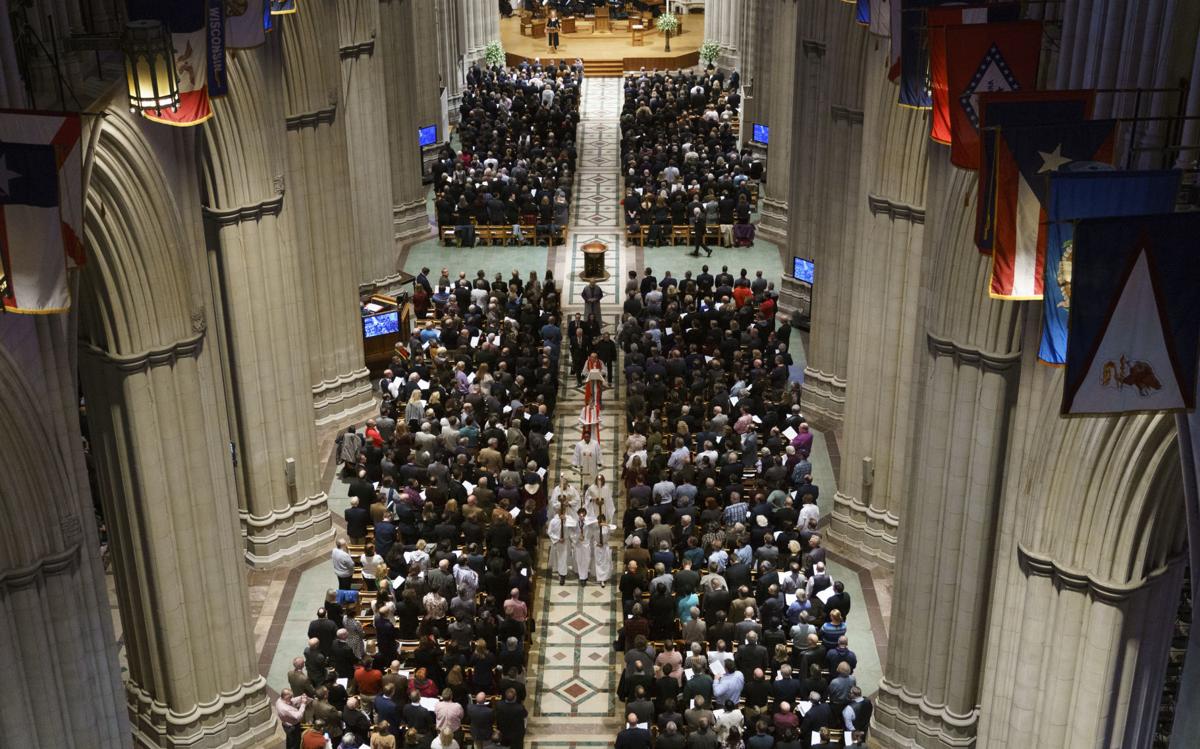 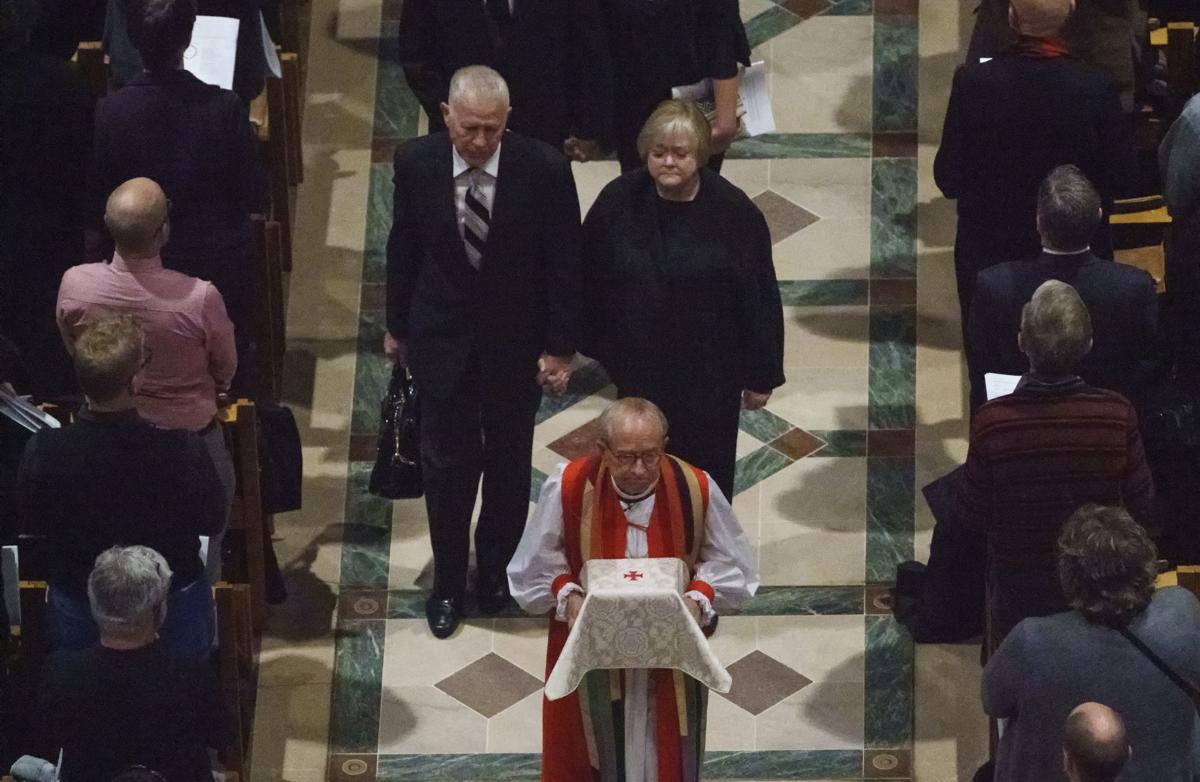 Dennis and Judy Shepard hold hands as they walk behind Rev. V. Gene Robinson carrying their sons ashes during the at the conclusion of a "Thanksgiving and Remembrance of Matthew Shepard" service at Washington National Cathedral in Washington, Friday, Oct. 26, 2018. The ashes of Matthew Shepard, whose brutal murder in the 1990s became a rallying cry for the gay rights movement, will be laid to rest in Washington National Cathedral. (AP Photo/Carolyn Kaster) 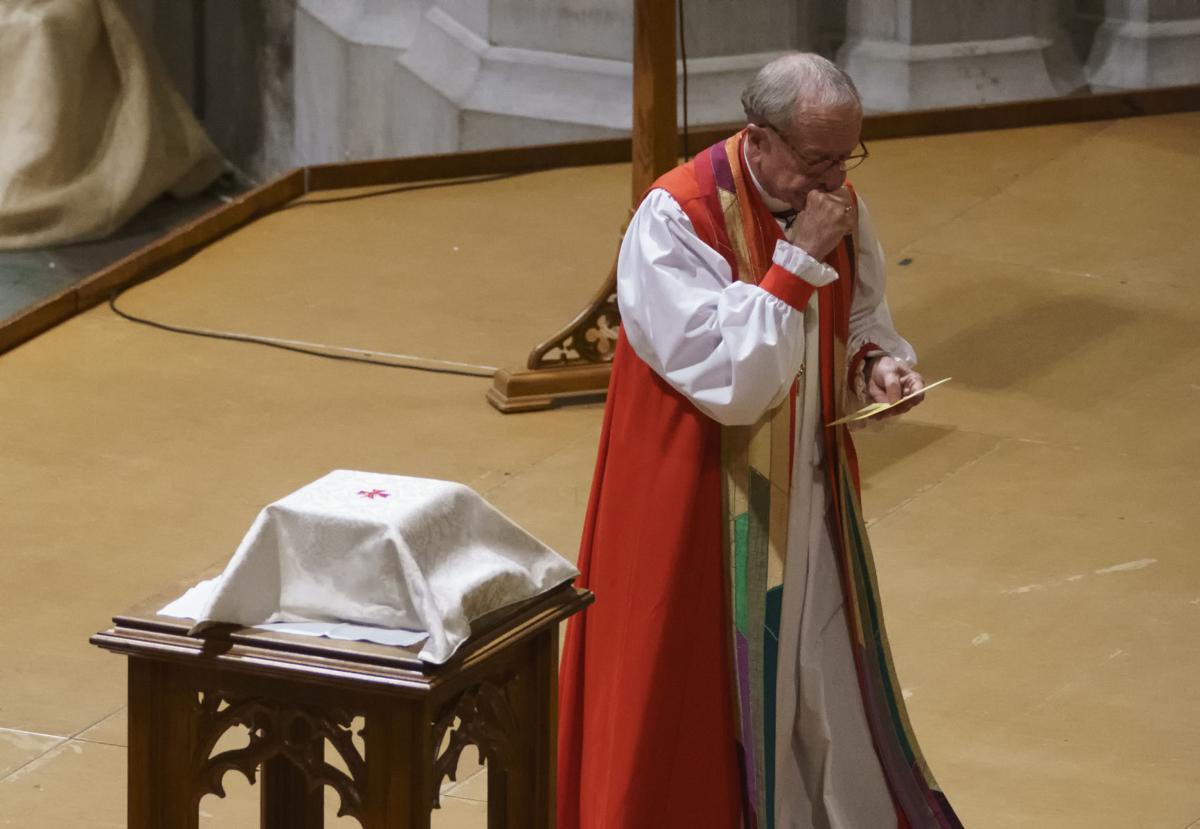 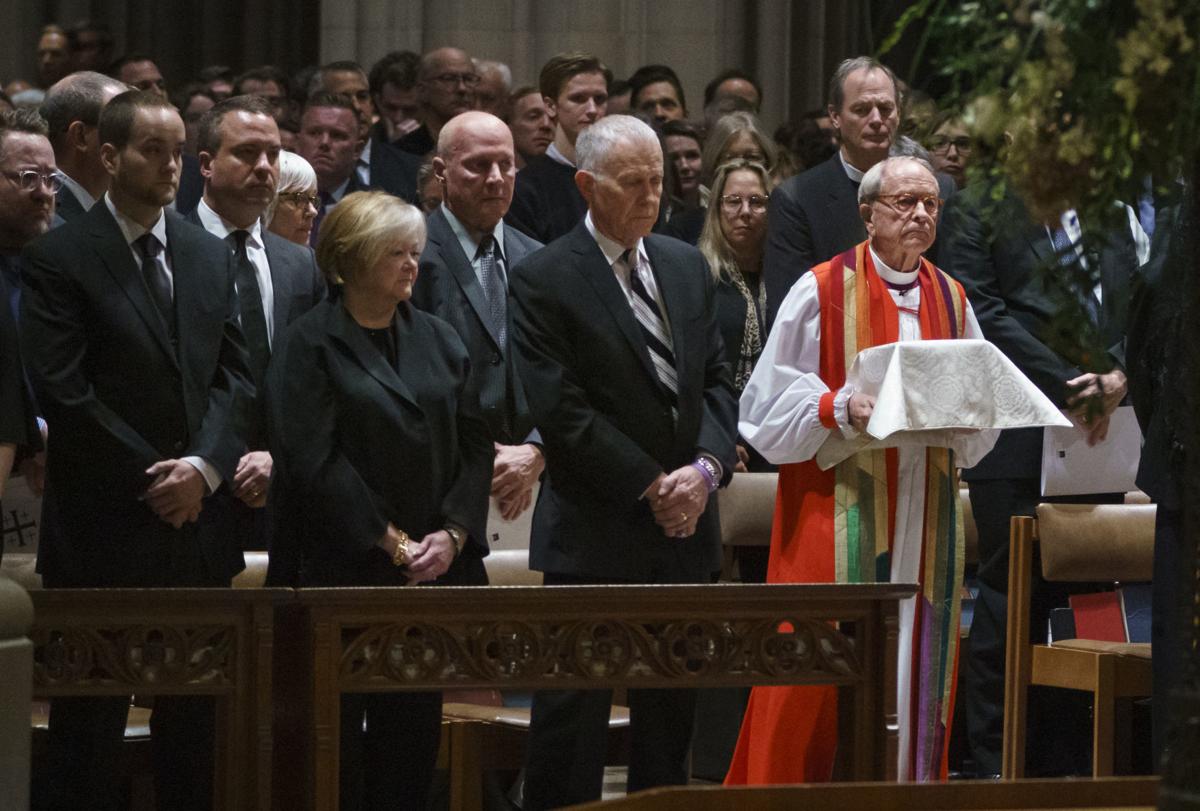 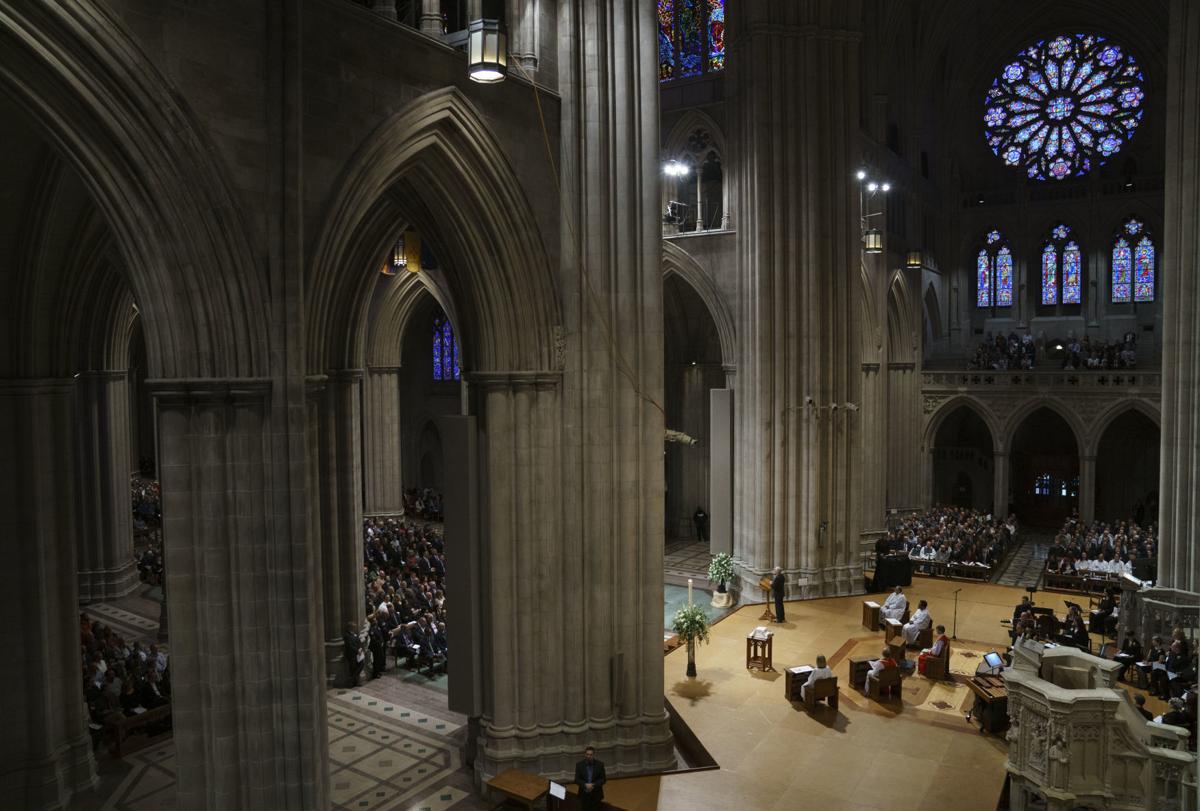 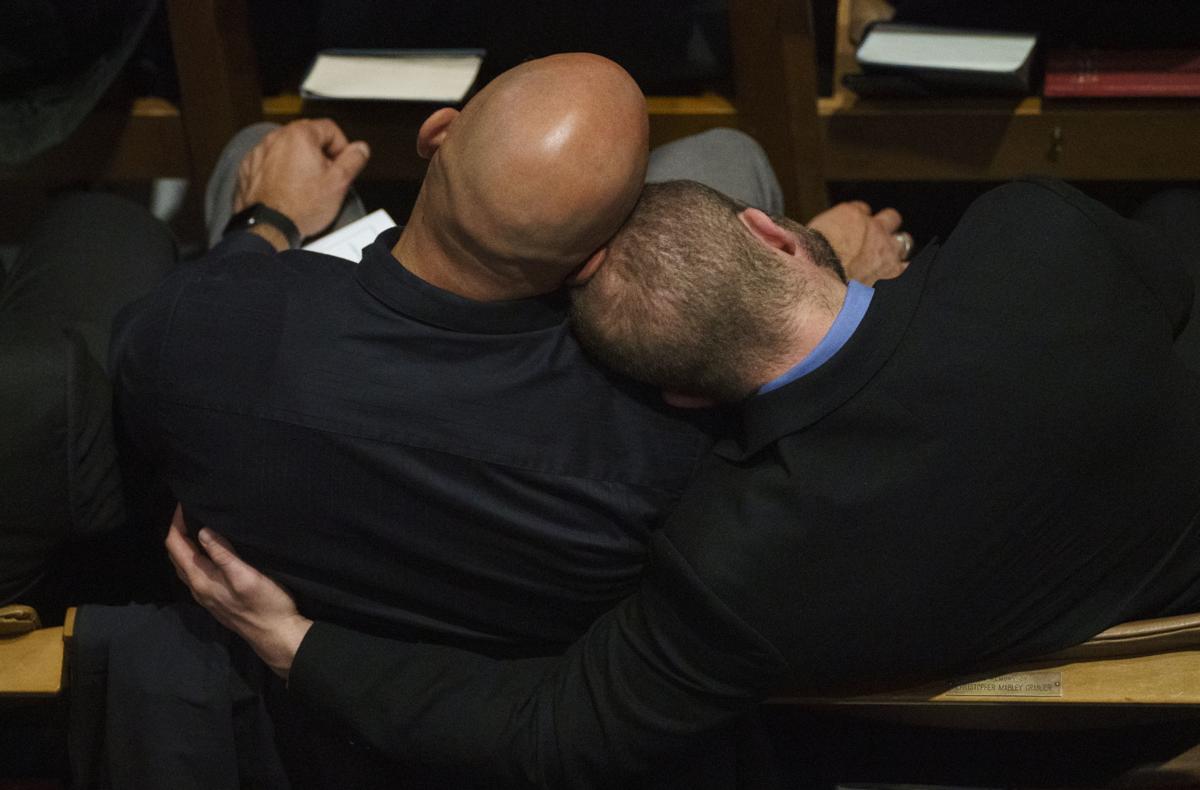 Matthew Shepard’s ashes were interred Friday morning at Washington National Cathedral at the request of his family.

The Casper native, who was gay, was murdered at the age of 21 on the outskirts of Laramie, where he was attending the University of Wyoming. Oct. 12 was the 20th anniversary of his death, which became a national media event and a defining moment in the equal rights movement.

A public thanksgiving and remembrance service was held Friday at the Washington, D.C., cathedral before the private interment. The Right Rev. Mariann Edgar Budde and the Right Rev. Gene Robinson presided over the service. Robinson, the first openly gay priest to be consecrated an Episcopal bishop, is a friend of the Shepard family and the Matthew Shepard Foundation, the group’s Executive Director Jason Marsden said.

“We’ve given much thought to Matt’s final resting place, and we found the Washington National Cathedral is an ideal choice, as Matt loved the Episcopal church and felt welcomed by his church in Wyoming,” his mother, Judy Shepard, said in the announcement of the interment. “For the past 20 years, we have shared Matt’s story with the world. It’s reassuring to know he now will rest in a sacred spot where folks can come to reflect on creating a safer, kinder world.”

Matthew Shepard was an acolyte at St. Mark’s Episcopal Church in Casper, according to Marsden. Shepard’s funeral was held at St. Mark’s.

Shepard was cremated after his death, and his parents kept his remains in an urn until the family decided upon a final resting place, Marsden said. At the time of Shepard’s death, his father, Dennis, was living in Saudi Arabia, and his mother was about to begin a career in activism that required frequent travel, making cremation “a practical option,” Marsden said. The family also did not want Shepard’s resting spot to be a target for vandalism or trespassing. That has also been their approach toward public memorials.

“They have not felt that they could find a safe place where his ashes could be interred,” Budde said when the interment was announced earlier this month. “It’s been 20 years. So let’s create a space where his remains can be at rest.”

There will be a marker and space for remembrances devoted to Shepard at the cathedral.

“It’s a great compromise to make sure his gravesite is safe and respected,” Marsden said, “but also that if people want to pay their respects, it’s a really nice thing to give people that opportunity as well.”

Marsden said the “fairly recent” plans to inter Shepard at the cathedral arose because the family has maintained a dialogue with members of the cathedral.

A family friend had suggested the family ask the cathedral to consider interring the remains, Shepard’s father, Dennis, told the Star-Tribune. Since the murder, a number of people have claimed to possess some of his son’s ashes. Dennis Shepard called people making those claims “scam artists.”

The family made the interment request through Robinson, and the cathedral was “incredibly honored and proud,” Budde said.

“We agreed, and we knew that it would be a pilgrimage destination for people who wanted to remember the impact of his life and horrible death and how that helped change so much in our country,” she said.

Marsden said it’s a “safe assertion” that the timing of the 20th anniversary had a role in the timing of Matthew Shepard’s interment; the foundation values anniversaries as a way to further the discussion surrounding Shepard’s legacy.

Washington National Cathedral held an observance for the 15th anniversary of Shepard’s death in 2013. Judy Shepard has participated in speaking engagements there, and Robinson received the foundation’s Making a Difference Award in 2010.

The cathedral held its first same-sex wedding in 2010 and hosted its first transgender preacher, the Rev. Cameron Partridge, in 2014.

“We’ve been on this journey for a very long time,” Budde said. “Twenty years ago, Matthew as an Episcopalian found welcoming and spiritual support in a church in Wyoming. But that was not a universal thing in our church. We had discriminatory policies, and we changed. We believe that the spirit of God was really changing our understanding, and it happened. And we are a very different place as a church. Not everywhere, but the official teachings of the church have changed.”

Washington National Cathedral’s willingness to include Matthew Shepard was a surprise, his father said, and showed the cathedral’s inclusiveness.

“It was rather stunning. We realize what a great honor it was,” Dennis Shepard said on a phone call earlier this month. “His life and death has really helped change hearts and minds, and we hope it continues to do so.”

The cathedral’s location in Washington is meaningful, Marsden said.

“Matt has come to be an important symbol for the movement for equal rights, and a great deal of that work went on in D.C.,” Marsden said, citing lobbying efforts and the Supreme Court’s decision to legalize marriage equality. “... Matt would’ve cared deeply about those things as an activist himself. It cements his position in the broader civil rights arc.

“... There’s a very heartwarming symbolism about it. He really was a person that the nation came to care about.”

Approximately 200 people have been interred at the cathedral over the last century, according to the announcement. They include Hellen Keller and her teacher Anne Sullivan; President Woodrow Wilson; U.S. Navy Adm. George Dewey; Thomas Claggett, the first Episcopal bishop ordained on American soil; Bishop Henry Y. Satterlee, who established the cathedral; and architects Henry Vaughan and Philip Frohman.

Last month, the cathedral was the site of Sen. John McCain’s funeral.

Photos: How Wyoming — and the nation — reacted after the death of Matthew Shepard

University of Wyoming student Matthew Shepard was severely beaten and left tied to a fence outside Laramie the night of Oct. 6, 1998. He was f…

A kid from Wyoming: Examining the legacy of Matthew Shepard

Twenty years ago, a gay University of Wyoming student was brutally attacked and left to die on a lonely plot of land near Laramie. On that nig…

Matthew Shepard’s parents, Judy and Dennis, will donate a collection of his personal items to the Smithsonian Institution’s National Museum of…

Dennis and Judy Shepard hold hands as they walk behind Rev. V. Gene Robinson carrying their sons ashes during the at the conclusion of a "Thanksgiving and Remembrance of Matthew Shepard" service at Washington National Cathedral in Washington, Friday, Oct. 26, 2018. The ashes of Matthew Shepard, whose brutal murder in the 1990s became a rallying cry for the gay rights movement, will be laid to rest in Washington National Cathedral. (AP Photo/Carolyn Kaster)