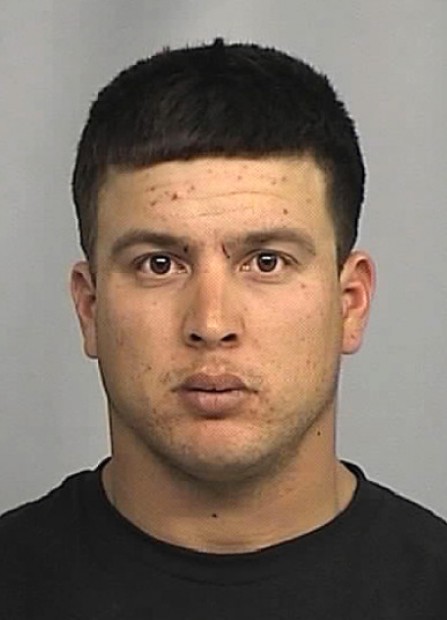 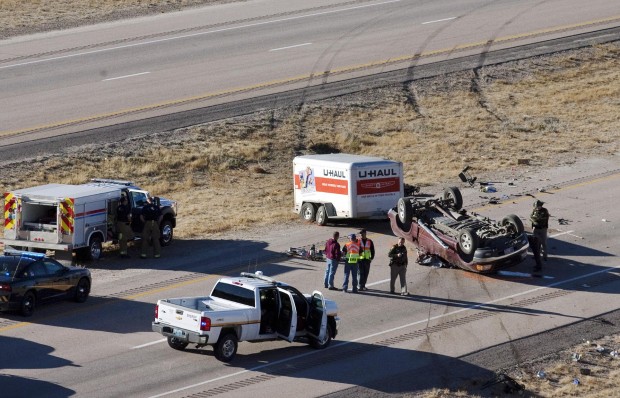 Skid marks can be seen leading from the southbound lanes of Interstate 25 across the median of the highway and into the northbound lanes, where a truck landed upside down, killing the driver on Oct. 20. Ryan M. Nordstrom, who was driving the car that allegedly caused the wreck, is facing an aggravated vehicular homicide charge in Natrona County District Court.

Ryan Nordstrom’s sentencing was one of the somber hearings that did not showcase vengeful victim impact statements or a prison-ducking defendant.  The predominant emotion for all parties involved was grief.

It was 10 months ago when Nordstrom, driving southbound on Interstate 25 near milepost 215, rear-ended the young Barto family’s U-Haul trailer. The impact sent the family’s truck into a median and rolling into the northbound lane.

The crash killed 27-year-old Daniel Barto, a husband with two young children and another on the way. Barto was moving his wife and children from Montana to Texas at the time.

Nordstrom, now 28, was charged with a single count of aggravated vehicular homicide.

Prosecuting and defense attorneys initially debated over the defendant’s use of “Scooby Snax,” -- described as a synthetic marijuana -- before the crash.  The state said the substance made Nordstrom lethargic and a reckless driver, while the defense team maintained that the substance was legal in all 50 states.

But in April, Nordstrom pleaded guilty to the charge, admitting that the state had enough evidence to convict him.

Two families gathered in the Natrona County District Court courtroom Wednesday afternoon to relay to the judge how the crash has affected their lives.

His family spoke of a son, brother, husband and father who would never meet his third child and whose full life had been destined for greatness.

“It left a hole in my heart,” his mother, Barbara, read to Judge Catherine Wilking. “I don’t want Daniel Lee Barto to be forgotten.”

Assistant District Attorney Dan Itzen rehashed the details of the crash, in the words of witnesses on the road and an accident report. Other drivers would tell investigators they knew something bad was going to happen when they saw the way Nordstrom was driving.

Itzen also criticized Nordstrom’s flippant designation of “freak accident” to describe the circumstances of the crash.

“I could not disagree more,” Itzen said, noting the defendant’s 81-mph speed and absence of brakes when he rear-ended the trailer.

The prosecuting attorney asked the judge to sentence Nordstrom to eight to nine years in prison, and to pay Barto’s family $21,401.65 in restitution for Daniel’s funeral costs.

Nordstrom’s mother, dismayed at how law enforcement and the media portrayed her son, provided a different version of him.

She spoke of a loving big brother to two sisters as well as an accomplished athlete and college graduate.

Since the crash, he has had difficulty sleeping at night and has reluctantly been treated with antidepressants, she said. Nordstrom has been living with his parents in Michigan since the accident.

Defense attorney Kurt Infanger read a statement from Nordstrom’s sister as well, who said her brother has been haunted by Barto’s death.

“He is merely the shell of a man awaiting his sentencing,” she wrote.

Infanger addressed the state’s assessment of his client and said the affidavit describes Nordstrom as a selfish, disrespectful, reckless person — not the person Infanger has come to know. When Nordstrom described the crash as an “accident,” he only meant to convey that he did not set out to hurt anyone, the attorney explained.

Infanger agreed that the gravity of the crime called for a stiffer penalty than probation or a stint at the Casper Re-Entry Center.

He asked the judge instead for two to six years, which would afford Norstrom a “wide-enough spread” to allow for counseling and a significant term of probation. More importantly, he said, Nordstrom could sooner begin working to pay the Barto family back.

“I failed the Barto family, their friends, my family. … I failed society,” he said. “I made more than one mistake in judgment at the worst possible time.”

“I will face that burden for the rest of my life,” he said. “… I accept my fate. Every last speck of pride has left me.”

Wilking reiterated the Barto family’s sentiments and discussed the aggravating and mitigating factors in her final judgment.

Although Nordstrom had a previous criminal record that included a charge of driving under the influence, she said his remorse, young age and the fact that he had no felony convictions helped work in his favor.

She settled on a compromised sentence of six to eight years in prison with six days of credit for time served.

Status: Sentenced to six to eight years in the Wyoming State Penitentiary

A Michigan man pleaded not guilty Thursday to aggravated vehicular homicide in connection with a fatal October crash north of Bar Nunn.

Skid marks can be seen leading from the southbound lanes of Interstate 25 across the median of the highway and into the northbound lanes, where a truck landed upside down, killing the driver on Oct. 20. Ryan M. Nordstrom, who was driving the car that allegedly caused the wreck, is facing an aggravated vehicular homicide charge in Natrona County District Court.