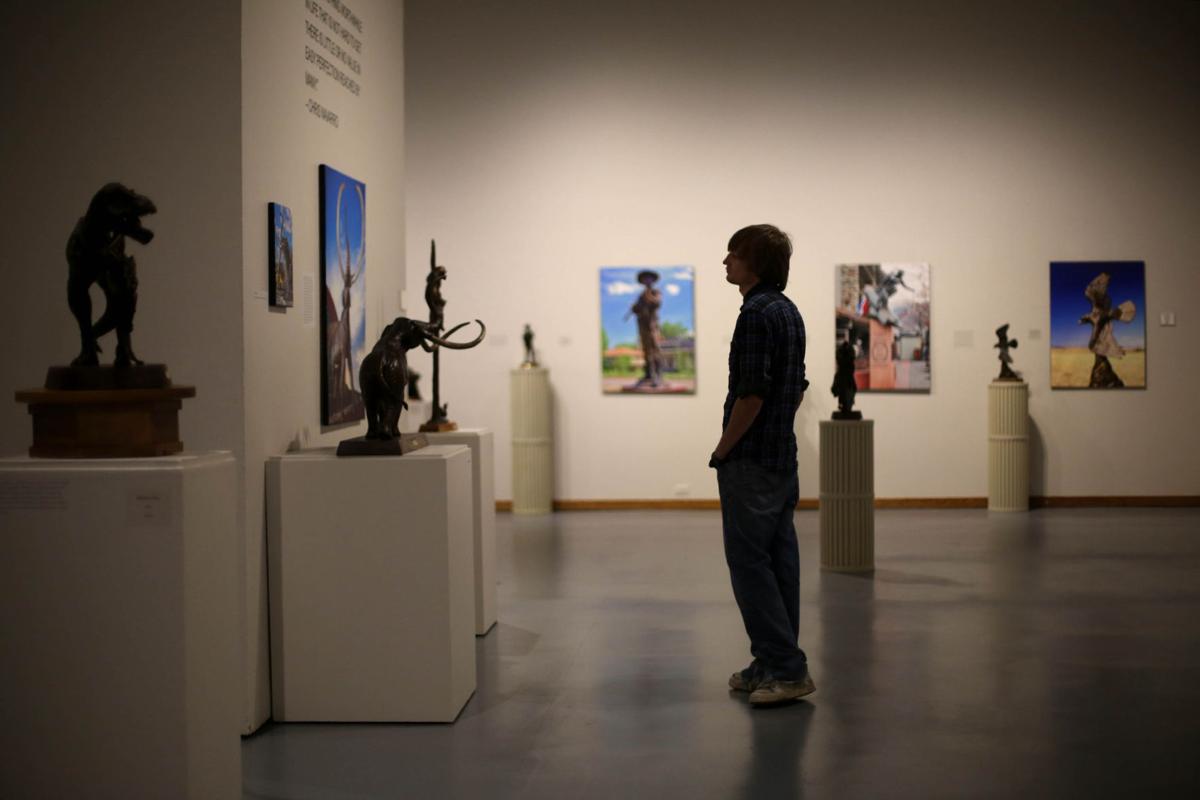 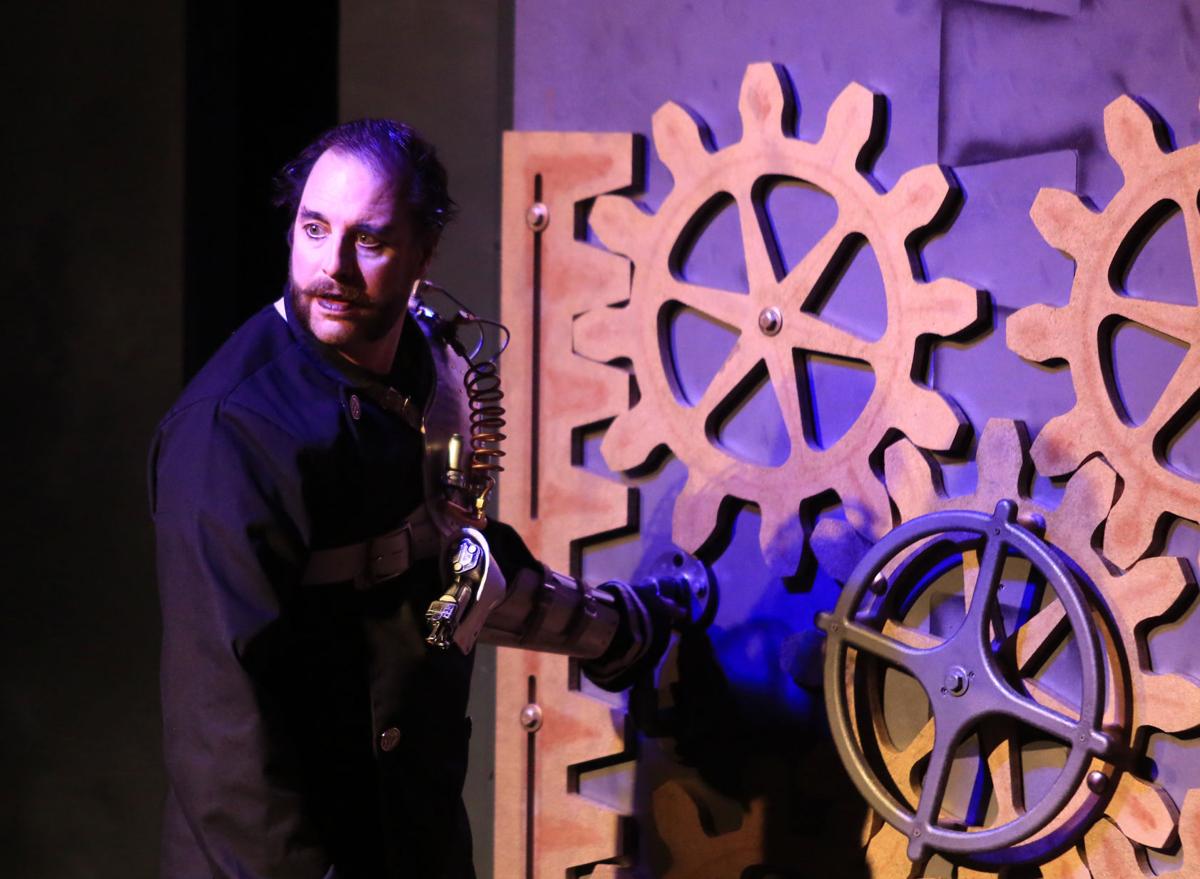 Troy Howe investigates a mysterious death as inspector Ernst during an October rehearsal for “Frankenstein” at Stage III Community Theatre.

Wyoming and other rural states would most feel the cuts because they’re less likely to receive funding elsewhere, according to state arts advocates. They say the cuts would undermine the state’s economy and its arts and education sectors as well as the fabric of communities.

Congress will decide the final budget over the next several months, and many are hopeful legislators will reject the the suggested cuts. This is the first time, however, that a president has proposed eliminating the NEA and NEH since they were created in 1967 and 1965, respectively.

“I think what’s most important is that us small states are the ones that are going to get just hammered by this,” Smith said. “New York can make up for its funding through donors, but Wyoming and the other small states, we just don’t have the population to replace that kind of funding.”

“Places where the states’ arts agencies are very important, such as Wyoming, where we have grants out in every single county, will notice it and notice it right away,” he said. “It’s a big deal for rural states.”

He’s a board member of the Wyoming Arts Alliance, an arts advocacy nonprofit that in late March prepared information for Wyoming’s congressional delegation detailing why the federal arts programs are crucial.

The NEA and the NEH each receive about $148 million a year, with about 40 percent going to states’ arts and humanities organizations to disperse throughout their communities. In the Cowboy State, those organizations are the Wyoming Arts Council and the Wyoming Humanities Council.

The Wyoming Arts Council supports activities in every county, from clog dance classes in Thermopolis and murals in Wheatland to a music education camp in Evanston and a Lovell film festival, according to the Wyoming Arts Alliance report. The grants are crucial to making many of these things happen, especially in low-budget organizations, the essay states.

The NEA provides about 40 percent of the Wyoming Arts Council’s budget. The council re-grants a large portion of that money to art-related nonprofits, symphonies, museums and more.

Its grants go toward such things as the Casper College Humanities Festival, a summer lecture series at Fort Caspar Museum and library reading programs. The humanities council’s own projects include podcasts with cultural leaders and support of Wyoming-related documentaries on Wyoming PBS last year.

Eliminating the NEH would end the Wyoming Council for the Humanities, which receives 70 percent of its budget from the agency, Smith said.

The NEA and NEH also provide some significant direct grants in Wyoming along with other support. For instance, the NEA provides information, data and services. The NEH also does major national projects such as the Ken Burns documentaries.

The Art Association of Jackson Hole is one organization that received a direct grant from the NEA last year for a project focused on the Latino community there.

While eliminating federal arts and humanities funding could have a major cultural effect, experts say, the budget impact would be negligible.

“The NEA’s budget is .004 percent of the overall national budget,” Lange said. “But the impact and reach of the National Endowment of the Arts is significant.”

Several Wyoming arts supporters say the NEA and the NEH also support the economy through tourism and jobs.

The say arts and humanities boost tourism, the state’s second-largest industry, with draws like museums and festivals.

“We’re a huge part of economic tourism, cultural heritage tourism,” said Smith, the Wyoming Humanities Council executive director. “We put events and exhibits on in towns like Torrington and Kemmerer and bring people to those towns.”

People at those events dine out, stay in hotels and campgrounds and visit shops, which means more money for the local economies, said Ellen Sue Blakey, executive director of the Hot Springs Greater Learning Foundation.

More than 4,000 people attended the nonprofit’s Big Horn Basin Folk Festival in Thermopolis last summer, about a third from out of state, Blakey said. More than 120 Wyoming artists from 30 Wyoming communities participated. The festival was partly supported by an NEA grant, she said.

“That is a large number of people for a community whose population is less than 4,000,” she said.

Those who travel for an arts event spend twice as much as those on trips for other reasons, according to an Americans for the Arts study cited on the Wyoming Arts Council website.

The arts also support many jobs in Wyoming, Lange said.

Claire Marlow, owner of Goedicke’s Custom Framing & Art Supply in Casper, said she’s worried about the cuts because her business has already felt the pinch of Wyoming’s economic slump.

“We’re in such a small town that anything like that makes a bigger splash,” she said. “I think it’s definitely going to trickle down to the art businesses, even though we’re not directly taking funds.”

Wyoming’s congressional delegation has not said whether they support the proposed cuts, which will be debated by Congress.

“Senator (John) Barrasso will closely examine funding for the NEA, NEH and other programs that play an important role in Wyoming communities,” his press secretary,Laura Mengelkamp, said in an email.

U.S. Sen. Mike Enzi has historically been a supporter of the arts and humanities, his press secretary, Max D’Onofrio said in an email.

“He has also been an advocate for sensible budgeting and seeks to stop deficit spending,” he said. “Senator Enzi does believe that runaway spending habits have bred excessive deficits and mammoth national debt. … Some decisions that have to be made will cause some pain, but if we continue to avoid making any significant headway in addressing our debt and spending, the pain felt in the future will be much greater.”

Rep. Liz Cheney’s press secretary did not respond to requests for comment.

Fire crews and aircraft were battling a large blaze burning west of Casper on Monday evening.

The Nolan - the downtown development intended to take the place of the former Plains Furniture - has been sold again.

Sixty-five confirmed recoveries and 70 total recoveries were announced — both of which are the most in a single day.

Close to 78% of confirmed patients have fully recovered.

The state's 10-day average dipped below 40 confirmed cases for the first time in a week.

The mountain lion was not aggressive and eventually walked away from the hikers.

The Wyoming Department of Health reports 52,172 people have been tested for the virus.

Talkin' with Sal: In a state of mourning

Our columnist writes about the passing of a beloved priest.

Due to a production/transportation issue, Casper Star-Tribune newspapers will be delivered later than normal this morning.

Troy Howe investigates a mysterious death as inspector Ernst during an October rehearsal for “Frankenstein” at Stage III Community Theatre.