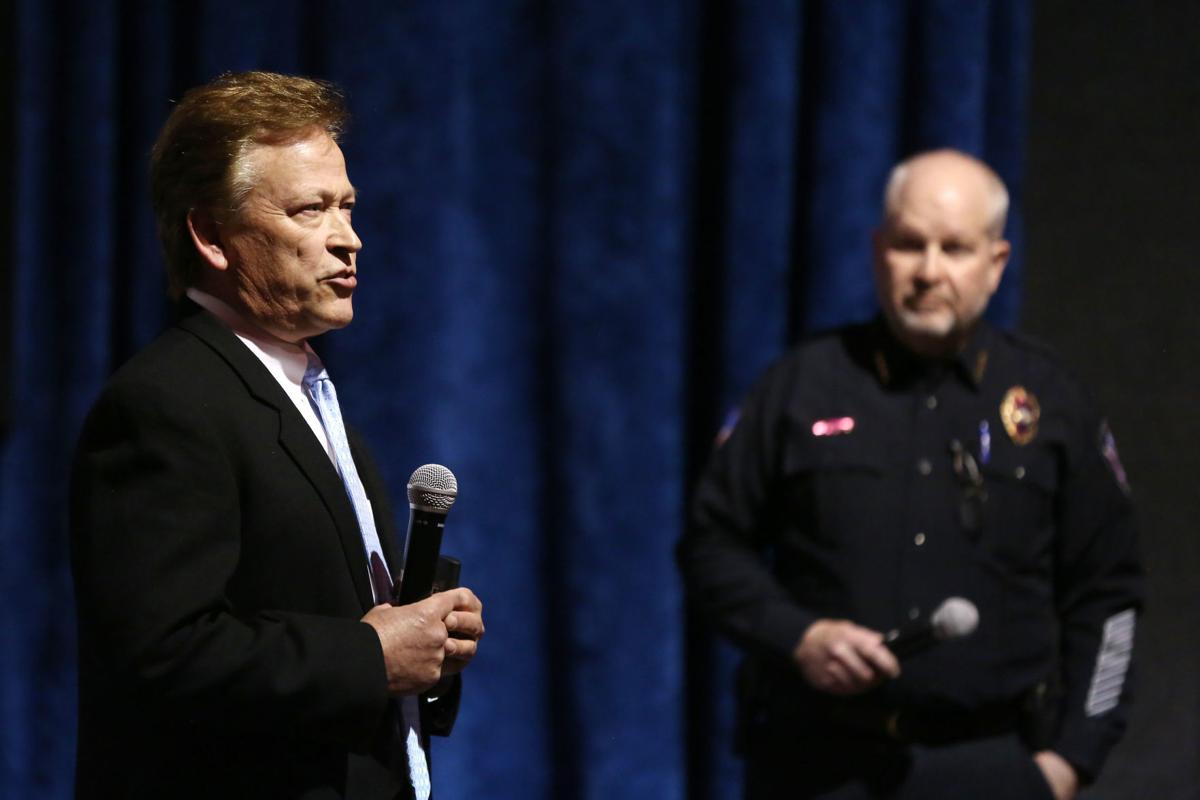 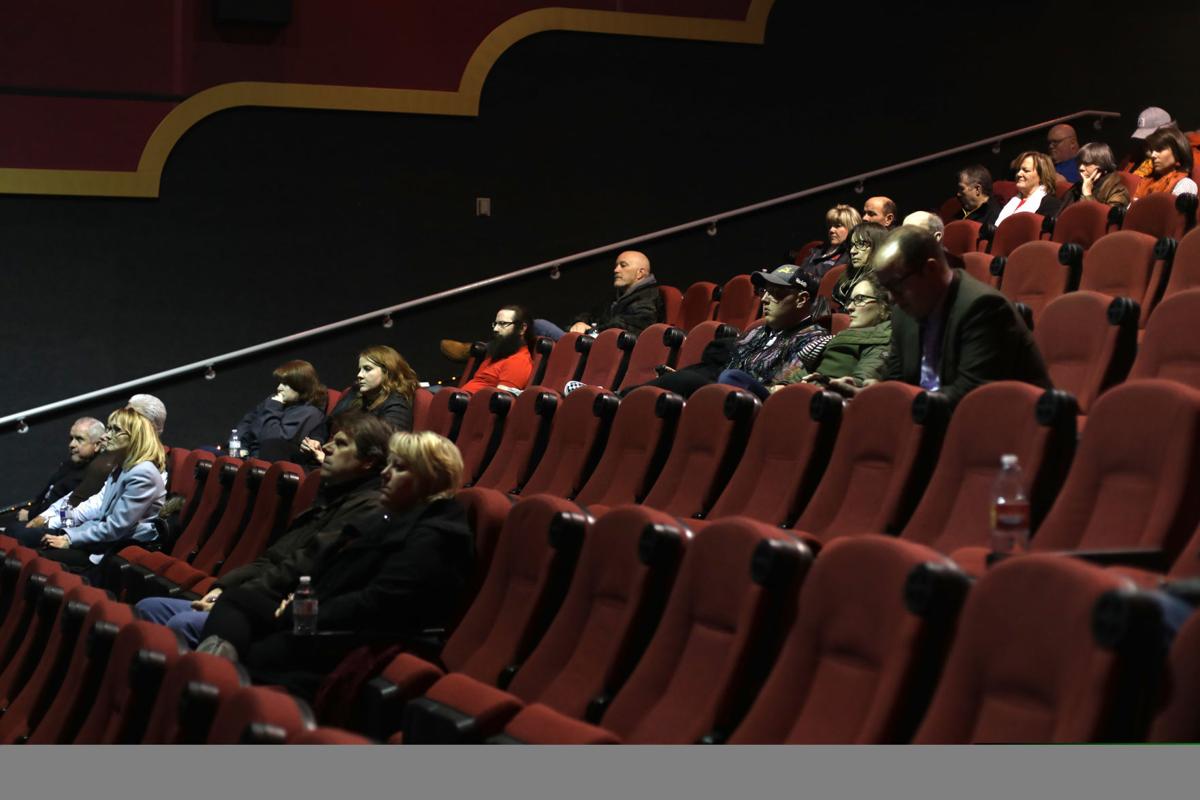 Members of the public attended an open forum Thursday at the Lyric in Casper to discuss the future of the Casper Police Department and its plans to expand or build a new facility.

The city of Casper is seeking public feedback on a plan to potentially build a new police department headquarters. The city held two public meetings Thursday to hear questions and offer information to residents.

We've summed up some of the details below.

Why is this necessary?

What it boils down to is that the police department does not have enough space for its size, based on national standards. Police Chief Keith McPheeters said the lack of space hurts the department’s efficiency, which in turn harms public safety.

The police chief has stressed the need for new headquarters since 2018, and previous department leadership has been asking for a new facility since at least 2017.

The argument comes down to a few factors supported by a needs assessment the city contracted from the Police Facility Design Group, formerly Wilson Estes Police Architects.

The report the firm compiled listed a number of deficiencies in the department’s current facility. That report can be found online as part of the city’s Oct. 29 special work session packet.

What is this going to cost?

There are a lot of variables that will go into the final cost of the project. Current estimates, however, put the price tag between $34 million and $44 million.

Where will the money come from?

No money has been allocated for this project yet, other than the roughly $166,000 the city paid the Police Facility Design Group for the needs assessment.

City Manager Carter Napier said the primary option would be to use the 6th-cent tax, also called a “special purpose excise tax,” which essentially adds a penny of sales tax to transactions conducted in Natrona County. The money can only be used on projects specifically approved by voters.

What's wrong with the current facility?

The main problem is the lack of space. In a presentation Thursday morning for area developers, the consultant behind the needs assessment, James Estes, showed a slideshow with photos of packed locker rooms and closets that had been converted to offices.

Plus, the police department has been there for a long time. It moved in in 1977 and has been growing out of the space ever since, according to the chief.

“We have made do for a good 15 to 20 years and we've accommodated about as much as humanly possible,” McPheeters said in a recent interview.

The old building and the lack of space are causing problems, he said, efficiency being the biggest concern. A few nights ago, McPheeters said, the air conditioning went out in the building. The department’s computer server room overheated and the servers crashed, he said.

The lack of space also makes it harder to process evidence, McPheeters added. For a current “high-profile case” that he declined to specifically name, he said it would take six to eight weeks with their current facilities to process digital evidence, ultimately slowing a potential prosecution.

When the department lacks efficiency, it hurts public safety, he said.

McPheeters has also been concerned about the lack of available space for the community in the current facility. He said as things are laid out now, you have perpetrators and victims of a crime potentially crossing the same path, as well as few spaces for community groups like neighborhood watch groups or youth organizations to meet.

What are the options for a new facility?

Estes recommends option two, mainly because in any of the renovation scenarios unexpected costs are more likely to come up. The purchase prices for options three and four were also not included in the cost estimates. As for option one, the county owns the building so it would be less of a return on the investment and would not adequately meet future space needs for the department, according to Estes.

Where is the current facility?

The current facility is mainly located in the county-owned Hall of Justice building at 201 N. David Street. The police department occupies the first floor of the building, as well as a handful of leased spaces in other buildings around the city.

What happens to the building if the police department leaves?

The police department leases its space from the county. If the department moves out, the sheriff's department, currently located on the second floor of the building, would expand into the first floor.

Would local contractors be used in the construction of the new facility?

Even if an out-of-state contractor is awarded a contract, state law requires that 70 percent of their subcontractors be in-state companies.

When will this be decided?

City decision-makers have been adamant that this decision will be made by residents. McPheeters said he plans to have more town hall-style discussions similar to the one held Thursday night to get public feedback.

If the 6th-cent tax is indeed identified as the funding source, then the decision will fall to all residents of Natrona County whether to vote to support that tax.

I have feedback. Where should I go?

The Casper Police Department is asking residents to reach out to them via social media, or its website casperpolice.org.

About 40 community groups approached the Casper City Council two weeks ago and asked for a portion of 1-cent sales tax revenue. Last Tuesday, …

Members of the public attended an open forum Thursday at the Lyric in Casper to discuss the future of the Casper Police Department and its plans to expand or build a new facility.