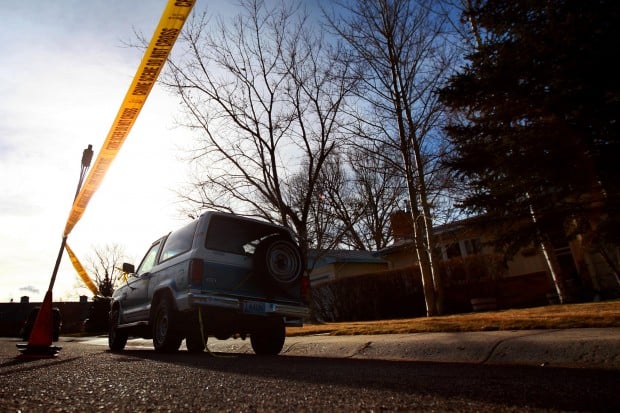 Crime scene tape surrounds he home of Casper College professors Jim Krumm and Heidi Arnold on Hawthorne Avenue in Casper on Friday. The couple were killed by Krumm’s 25-year-old son, Chris Krumm, Friday morning. Arnold died from knife wounds on the street in front of the house, after which Chris Krumm killed his father and himself in a Casper College classroom. 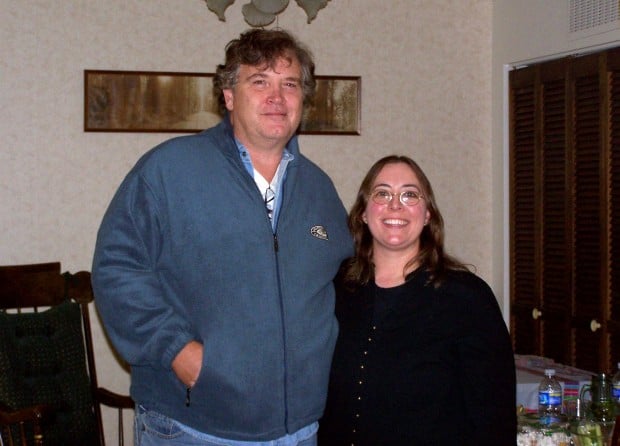 Casper College professors Jim Krumm and Heidi Arnold are shown in an undated photo provided by Casper College. The couple were killed by Krumm’s adult son Chris Krumm on Friday.

Chris Krumm stepped into the classroom and drew back the bowstring. His father, Casper College professor Jim Krumm, was close; maybe only four feet away. Chris fired a single arrow.

It struck his father in the side of the head, and traveled through to the other side. The impact knocked the older man to the floor.

But the 56-year-old rose and fought back. Police aren’t sure how long the struggle lasted, but it gave the students inside enough time to escape.

Somehow in the chaos that followed, the door was bumped shut. It locked father and son inside, in a final struggle.

Saturday mornings, a small group of Casper College instructors gather for breakfast at a local restaurant. Many are computer teachers, but all are welcome.

Jim and his girlfriend, Heidi Arnold, came when they could, said Ralph Anderl, a retired Casper College computer science teacher.

When Anderl retired in 2002, Jim took over his job.

“Mr. Krumm was a very compassionate person,” said William Wallace, who took every computer science class Jim taught at the college. “As a professor, he’d always give me extensions if something bad was happening. I always spoke to Mr. Krumm about these things. He wasn’t just a teacher to me.

“He has been more like a father than my actual father has been.”

Heidi Arnold, a 42-year-old math teacher, came to Casper College two years after Jim. She was enthusiastic, but wasn’t the type of teacher that would burst into the class barking math at you, said Kate Lovelace.

Lovelace hated math before Heidi’s class. She didn’t understand it. All her other math teachers had been older men. Heidi was a younger woman. Relatable.

“She kind of let you do the talking,” Lovelace said. “She wouldn’t just give you the answer. She’d let you work through it.”

Jim and Heidi started seeing each other sometime after Jim’s wife died in 2005. They lived together in a house on Hawthorne Avenue and loved to travel.

Mickie Goodro taught math at Casper College until seven months ago, when she moved to Twin Falls, Idaho. Heidi used to come into her classroom to confide in her, and Goodro got to know Jim at the Saturday breakfasts. Jim loved exotic plants — he grew banana trees in his house — and shared Goodro’s love of goldfish, taking her pond fish every winter to keep them warm.

“I do want people to know they were absolutely loving, good people that I knew I could ask them for anything that I needed,” Goodro said.

There are few hotels in Casper that are farther from Hawthorne Avenue than the Shiloh Inn. Technically, the motel sits just across the city limits in Evansville. It’s an unassuming place, tucked behind a former gas station that’s now a barbeque joint.

Chris checked into his room shortly after 3 p.m. on the day before the killings. There was nothing remarkable about him, according to the front desk clerk. He paid for his two-night reservation with a credit card.

She never saw him again.

Police suspect the 25-year-old drove to Casper from his home in Vernon, Conn. They don’t know whether his father, or Heidi, were aware he was back in town.

Investigators uncovered information suggesting Chris had planned the attacks at least a few days before carrying them out. But they haven’t found any indication he threatened the victims beforehand.

His motives remain unclear. Speaking to reporters on the day after the attacks, Casper Police Chief Chris Walsh said he believed police had found some communication from Chris, explaining his intentions. It’s not known yet what they will reveal.

The attack began at the couple’s home on Hawthorne Avenue. Jim was already at the college, but Heidi was still home.

They lived in a middle-class neighborhood just north of Sunrise Shopping Center. A place where kids play in the street. A little slice of heaven, one neighbor called it.

It’s unclear exactly when Chris began the assault. Police didn’t receive the first call until 9:08 a.m. — two minutes after they first learned about the incident at the college. Officers responded to the scene, but by then, it was already too late.

From the evidence, police suspect much of the attack on Heidi took place outside the house. Chris stabbed her multiple times. Authorities found signs of defensive wounds on her body.

She was barefoot and still dressed in pajamas.

It would have taken only minutes for Chris to drive from his father’s house to the campus.

He arrived at the Wold Physical Science Center with two knives and a compound bow hidden inside a blanket.

Goodro used to remember Chris with something that could be fondness. Now she doesn’t know what to think.

He was in her Calc III class at Casper College, the kind of student that always wanted to know more.

“Chris was brilliant. One of the smartest students I ever had,” Goodro said.

“But his social skills were not wonderful.”

Chris graduated from Natrona County High School in 2005 and was an honor student. He studied electrical engineering at Colorado School of Mines.

But he seemed to be a loner.

Anderl remembers sailing with Jim and Chris on Alcova Reservoir. Chris was perfectly pleasant, totally gentle, constantly smiling. But something was a little bit different about Chris. Nothing Anderl can quite put his finger on. Just off.

Sometime in the past couple of years, Chris moved to Connecticut. He’d gotten a job that seemed perfect, and he and Goodro had breakfast before he left.

The job didn’t last. Chris had a hard time keeping a job while he lived out east.

This summer, Chris moved into a single-room apartment in Vernon, Conn., according to the Hartford Courant. He was quiet, but polite, neighbors say.

But one neighbor, interviewed Friday as police searched his apartment, remembered one unusual encounter.

“He gave me a ride home from McDonald’s once,” Matt DiPinto told the Courant. “He told me his dad gave him Asperger’s [syndrome], that his dad shouldn’t have passed it on. He said his dad should be castrated. I didn’t know him that well, he just kind of said it out of nowhere, so that kind of threw me off a little.”

Friends in Casper never saw anything violent in Chris.

“I am upset about something I read today that Chris did not have a good relationship with his dad,” Goodro said. When Chris came home to visit, he’d accompany his dad and Heidi to the Saturday breakfasts.

“For my husband and myself, every time we saw Chris he seemed to be relaxed and smiling. We cannot fathom where the hate must have come from,” Goodro said.

Police haven’t pieced together the details of the final struggle.

They know it wasn’t a protracted battle. They also know three faculty members tried to intervene. Security arrived with keys, and at one point, after the door was opened, someone threw a coffee mug.

Investigators believe Chris stabbed himself multiple times before plunging a large knife into his father’s chest.

The first officer arrived within minutes. By then, dispatchers had received two traumatic injury calls – one from the college and a second from Hawthorne Avenue.

Police knew someone had been stabbed inside the physical science center. They swept through the building, looking for suspects or injured people.

They found Chris and his father in room 325. The elder Krumm was already dead. His son showed signs of life. Medics rushed to the classroom, but were unable to save him.

Father and son died together at the scene.

The windows of Jim Krumm’s classroom were covered with brown paper Monday morning. Bouquets of flowers and a cross sat in front of room 325.

The suspect in the Casper College slayings applied for a pistol permit six weeks before the attacks, police in Connecticut said Monday.

In front of the Wold Physical Science Center at Casper College on Saturday, caution tape flapped in the wind. Police cars filled the parking l…

Three die in killings at Casper College, nearby neighborhood

A man with an edged weapon killed one person in Casper and another at Casper College before apparently taking his own life in a classroom, pol…

Crime scene tape surrounds he home of Casper College professors Jim Krumm and Heidi Arnold on Hawthorne Avenue in Casper on Friday. The couple were killed by Krumm’s 25-year-old son, Chris Krumm, Friday morning. Arnold died from knife wounds on the street in front of the house, after which Chris Krumm killed his father and himself in a Casper College classroom.

Casper College professors Jim Krumm and Heidi Arnold are shown in an undated photo provided by Casper College. The couple were killed by Krumm’s adult son Chris Krumm on Friday.