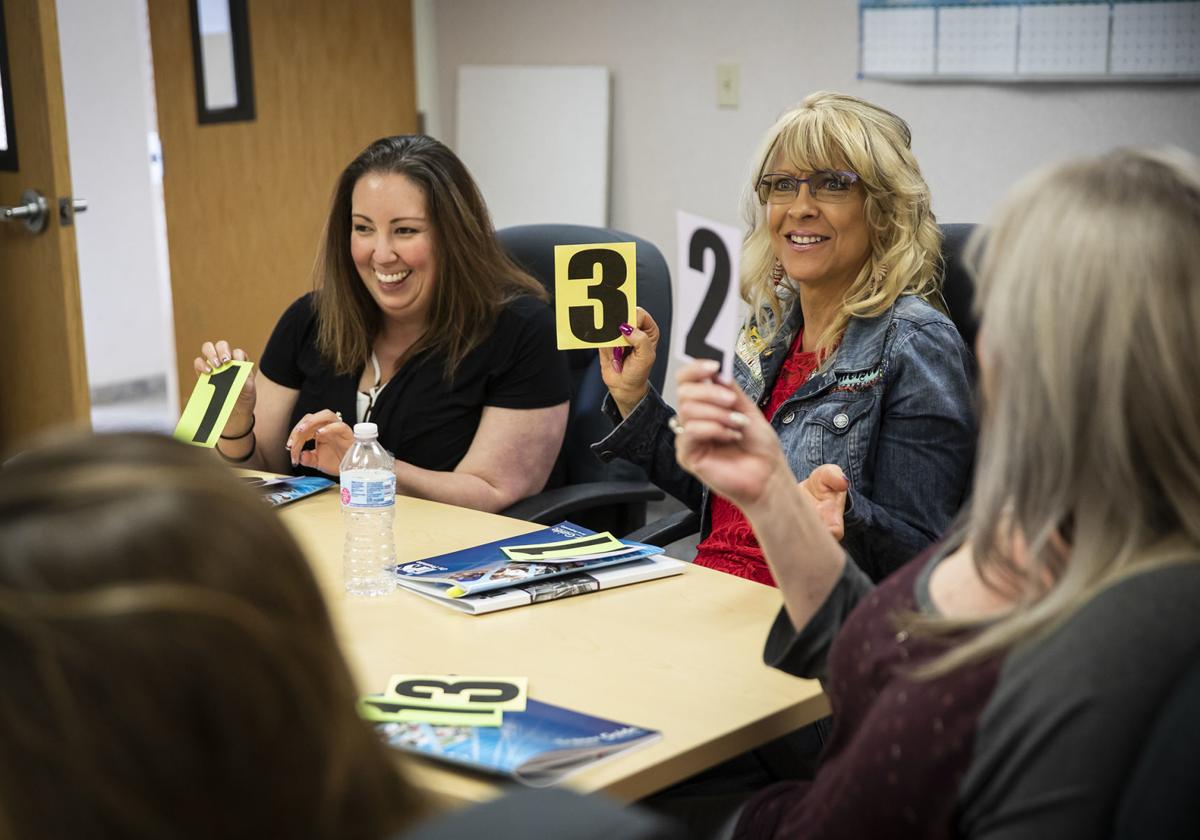 Karen Kanelos, from The Office Bar and Grill, and other attendees of the TIPS program vote on a server's performance from an example video at the Casper-Natrona County Health Department on June 19. 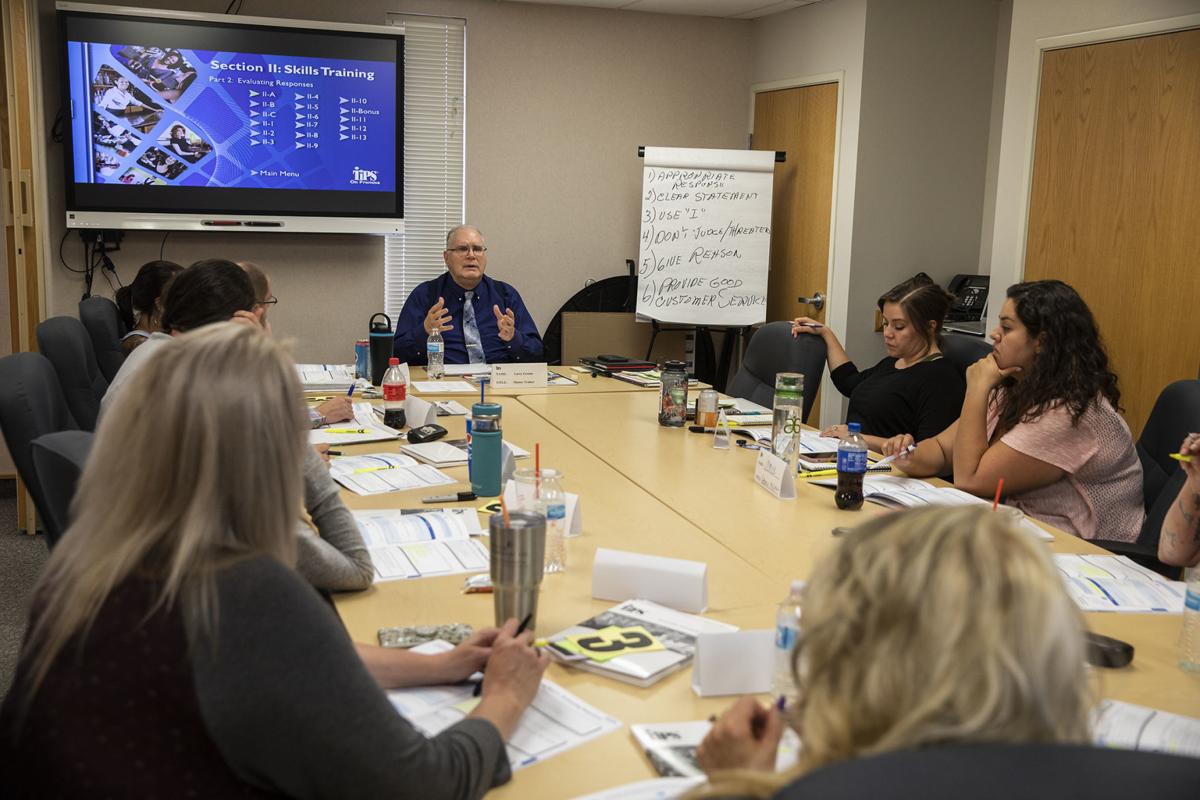 Larry Greene, an independent master trainer with TIPS, leads a class at the Casper-Natrona County Health Department on June 19.

Larry Greene’s oldest son is in a wheelchair. Had somebody stopped a drunk driver from getting into their car 26 years ago, he might not be.

Ever since, Greene has vowed to be the person who intervenes. He teaches others to do the same. Greene believes public safety is a group effort, and so he trains bartenders and servers to notice when a customer has had more than the safe amount of alcohol. The training is called TIPS, or Training for Intervention Procedures. And as of May 5, all liquor license-holding businesses in Casper have to have their staff complete the training.

Greene’s job is to prepare business owners and managers to conduct the trainings themselves.

The safety risks range from alcohol poisoning to drunk driving, and McPheeters told the council something had to be done.

Across Wyoming, similar problems have been identified. Wyoming has long ranked among the worst states for drunk-driving fatalities. In 2003, then-Gov. Dave Freudenthal started a task force to address drunk driving in the state. Many of his predecessors have also tried to tackle the issue. But despite passing more stringent laws over the years, Wyoming still struggles to correct the deadly behavior.

Last year, Wyoming had the most drunk-driving fatalities per capita in the country, according to the National Highway Traffic Safety Administration.

TIPS has been identified as one way to address the ongoing problem. The idea is to put some of the responsibility on those serving the alcohol. So servers are trained to cut people off once they’ve become too drunk and also to ensure those people find safe ways home.

The Wyoming State Liquor Association has partnered with other state agencies to fund trainings across Wyoming. More than 14,000 people have been trained under these partnerships, according to the state liquor association. Now Casper is joining those ranks.

Rather than punish businesses for overserving patrons, the council decided education would be a better first step. Still, Mayor Charlie Powell has said if the problem persists, the punitive measure is still a possibility.

The council passed an ordinance in March requiring all liquor license holders in Casper have their employees complete an alcohol-serving training program within 90 days of being hired. Local businesses are now working to ensure they can comply.

One day in mid June, 10 business owners and managers gathered around a narrow conference table in the county health department to learn how to train their staff to spot overintoxication and intervene.

Greene went over the factors that affect how quickly a person becomes drunk and what signs to look for to tell if somebody has had too much. Then he went through how to instill the information in new staff.

The group watched a series of video portrayals of potential situations bar and restaurant staff might find themselves in with customers. Some videos showed drunk, hostile customers; others showed sober customers who were underage. The training attendees then rated how effective the server or bartender in the video was at handling the situation.

Greene kept the training lighthearted but took brief moments to emphasize the seriousness of why they were all there.

“If you can prevent an injury, a death, maiming property, you should step in,” he said.

Karen Kanelos co-owns The Office, a downtown Casper bar and grill. She was one of the training’s attendees and has been on board with requiring the training since the idea was first proposed. She said she thinks the training will give new employees a good foundation they otherwise would have to learn from experience.

“If they’re younger servers or bartenders, they just don’t have a lot of knowledge on how to handle certain situations,” she said. “So it was a good feeling (when the ordinance passed.)”

Acacia Boyes, who works for Wyoming Downs and also was in attendance, supports the rule too.

“When you’re running a business you want everybody to feel safe,” she said. “This keeps everybody accountable.”

Greene said at the end of the day, people want to look out for one another. This training gives them the tools to do that, he said.

The Casper-Natrona County Health Department will celebrate its 65th anniversary this week at its central Casper offices, the agency announced Monday.

Casperites could enjoy their drinks while walking downtown this summer under a proposal from the City Council to create open container nights a few times a week.

Karen Kanelos, from The Office Bar and Grill, and other attendees of the TIPS program vote on a server's performance from an example video at the Casper-Natrona County Health Department on June 19.

Larry Greene, an independent master trainer with TIPS, leads a class at the Casper-Natrona County Health Department on June 19.