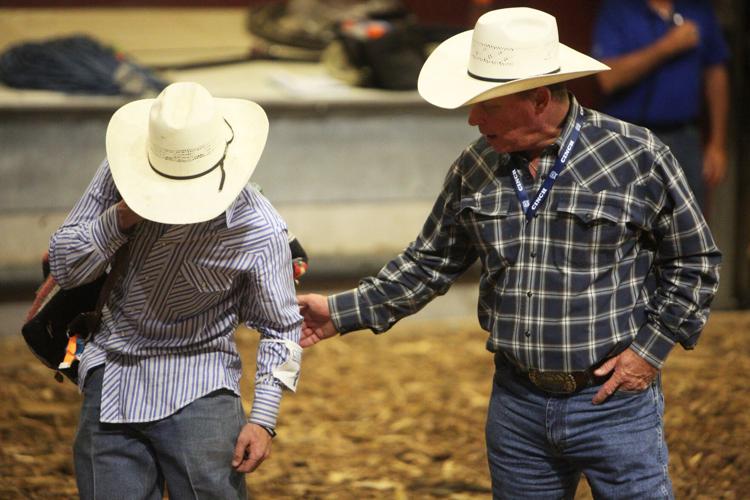 Fletcher Jowers, of Southwest Texas Junior College, gets comforted by his coach Joey Almand after being bucked before time Friday during the bull riding event at the College National Finals Rodeo at the Ford Wyoming Center. Almand and his wife Sugar Almand coach the rodeo team from Uvalde, Texas. 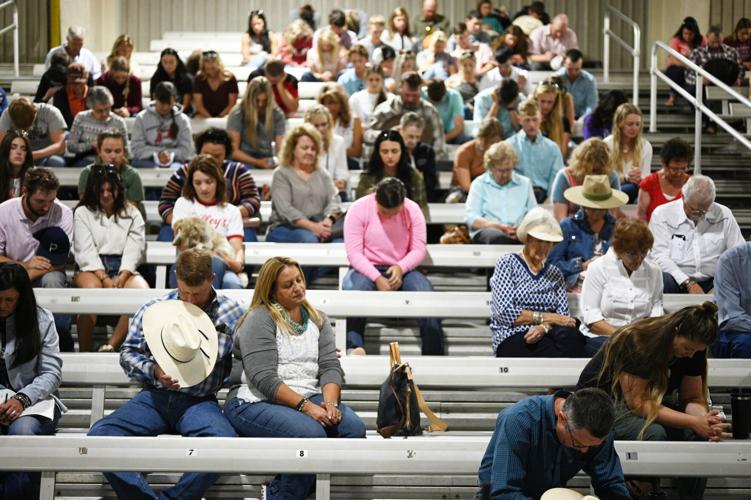 Joey and Sugar Almand, of Uvlade, pray together during the Cowboy Church service on the first day of College National Finals Rodeo on June 12 at the Central Wyoming Fairgrounds. The Almands coach a rodeo team at a college based in Uvalde. A gunman killed 21 people at Robb Elementary School there last month. 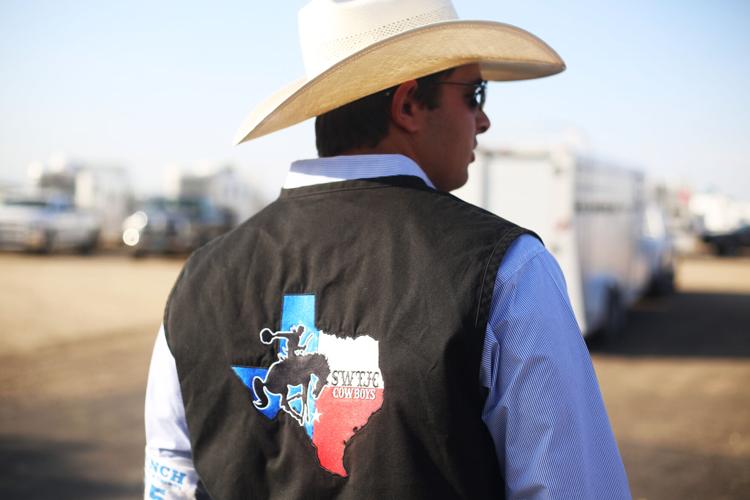 Will Farris, of Southwest Texas Junior College, heads to rig up his horse before the team roping competition Friday during the College National Finals Rodeo. Farris is one of two competitors at the CNFR hailing from the college in Uvalde, Texas.

Sugar Almand pulls a rubber-banded stack of black-and-white patches and a mess of black bracelets from her bag.

They both say “Pray for Uvalde,” and the patches have an outline of Texas with Uvalde in the southwest highlighted in red.

If you look closely at the cowgirls and cowboys competing this year at the College National Finals Rodeo, you may catch a glimpse of a patch on an arm or a bracelet on a wrist.

Almand, assistant coach for the Southwest Texas Junior College rodeo team, has been passing them out in Casper this week with her husband, head coach Joey Almand. The team has a bull rider and a team roper competing in the CNFR this year, the couple’s fourth at the helm of the program.

Most years, the team is just one of nearly a hundred who come to Casper for the rodeo. But this year, just weeks after a shooter killed 21 people at Robb Elementary School, they stick out as the team from Uvalde.

The team hosts their own college rodeo every fall at the fairplex in Uvalde. This year, the 60th iteration, the rodeo will be dedicated to the families of the victims of the May 24 shooting.

This week, the Almands have been giving out patches and bracelets to anyone who wants one, as a way to spread support for Uvalde as it recovers.

The last three weeks have been overwhelming, frustrating, confusing, sad. The shooting seemed like pure evil, and the constantly changing information about it doesn’t help.

The bracelets have a Bible verse on them, Philippians 4:6 — “Do not be anxious about anything, but in every situation, by prayer and petition, with thanksgiving, present your requests to God.”

On the patches, the next verse: “And the peace of God, which transcends all understanding, will guard your hearts and your minds in Christ Jesus.”

After the rodeo ends, competitors seek respite at Cowboy Church

“It’s so senseless, it makes no sense. It’s hard to understand,” Almand said. “If you believe that God is in control of your life, and all’s your job is to look at God, it’s a lot less pressure.”

It’s the same with rodeo. When kids are stressed about performing and competing, or making their parents’ investments in the sport worthwhile, they can overthink it, Almand said. Or with recruiting, it’s no use being frustrated at how hard it is to get students down to Uvalde.

“All those things are out of our control,” Almand said. “But what can we do? We can pour into young people’s lives in a lot of different ways. And it doesn’t have to be by winning titles.”

After the shooting, Almand said, almost every coach in their region reached out to her family immediately.

“They were just like, ‘Oh, this is terrible, I’m sure there’s nothing we can do, but just show support,” Almand said.

She ordered about 500 bracelets and 100 patches to bring to the CNFR, checking with rodeo officials to make sure it was OK for competitors to wear them (they can’t wear patches from sponsors during competition). They told her it was “absolutely” OK.

“It’s a much larger message for me,” she said. “You may not know where Uvalde, Texas, is, but you might now. And you might look it up.”

A look at the CNFR's Casper origins

In Casper, some people have asked for the patches, Almand said, and they’ve offered them to others. Some competitors took multiple, to wear each time they ride.

For the most part, the rodeo crowd tends to be more conservative, and largely Christian. While other parts of the nation have called for gun control in the wake of the shooting, Almand said most people at the CNFR have offered to pray for Uvalde. They’ve stayed away from political talk.

When she went to get a massage in a Casper parlor earlier this week, she said she was a “little relieved” that the employees didn’t have a reaction to her saying she was from Uvalde.

“I’m tired of talking about it,” she said. “Or am I a little frightened that people are that unaware? Or are they desensitized?

“I told Joey, ‘I’m so glad to get out and come up here. I feel like I’m living in the Twilight Zone there.’”

The week of the college’s rodeo in Uvalde, students from Robb Elementary usually take a field trip to the fairplex to learn about the rodeo and watch an exhibition.

“Our students would put on a little rodeo for them, then let them participate in a stick horse race, stuff like that,” Almand said.

In Uvalde, the elementary schools are divided up by grade. That means that every single second through fourth grader in the city goes to Robb Elementary, about 600 kids, and all of them would file into the fairplex. The trip hasn’t happened for a couple years because of COVID-19, Almand said.

This year, when the team’s CNFR delegation was making the 18-hour trip to Casper, they stopped in the ProRodeo Hall of Fame in Colorado Springs.

There, in a display dedicated to rodeo clown and bullfighter Leon Coffee, is a pair of clown baggies made by the students of Robb Elementary with the school’s name on them.

“He would always come to Uvalde ... he would always go to Robb Elementary School and every year they would make him a pair of baggies,” Almand said. “So we just wanted to see it.”

Most of the rodeo team isn’t from the Uvalde area, especially since in recent years a lot of their students choose to take classes online and practice wherever they live. And those that do live and practice in Uvalde had mostly gone home for the summer, since school ended for the semester about a week before the shooting.

So while the team wasn’t directly affected by the attack, the Almands know several other people who work at the college who lost a family member.

It’s a small town where most people know most people, Almand said, and law enforcement is everywhere since Uvalde is so close to the border with Mexico. Some of their friends and neighbors who work for Border Patrol and Homeland Security were called to respond to the shooting that day in late May. They know the mayor and several others thrown into the relentless news cycle.

It’s refreshing to get away from the chaos that descended upon Uvalde following the shooting, Almand said. For weeks, press from around the world has crowded the city’s streets and frustrated locals with their coverage that often misses key context about Uvalde, Almand said.

Joey went up to the college, near the regional airport, to feed the team’s goats a few days after the shooting, not knowing President Joe Biden would be in town that day. After weaving around closed streets and being let in by a security guard at a back entrance, he was shocked to see a SWAT team coming towards him.

“He was like, ‘I’m just the rodeo coach! I’m just trying to feed my goats,’” Almand said.

While the community was largely supportive of its police and other law enforcement before the shooting, she said the confusion it’s caused has damaged a lot of that trust.

Now, it feels like something big is “looming” over Uvalde, Almand said. The city has been brought together by the tragedy, but at the same time divided over what really happened that day.

About a week before the shooting, the father of one of the Almands’ students, a pastor, was in town for graduation at Southwest Texas Junior College.

After the shooting, the pastor returned for a livestock auction raising money for survivors and families. Then, he prayed again.

Almand said she wouldn’t be able to make sense of the tragedy without her faith. The Bible says that God doesn’t give people the spirit of fear, so she’s trying not to be afraid.

“I don’t know what the future holds,” Almand said. “God does.”

Downtown Casper features four spots to get a cup of joe, and three more on the way, all within walking distance of each other.

Fuel runs out at some Casper gas stations

Pumps at some Casper gas stations had "out of order" notes taped to the nozzles. The reason for the shortage wasn't entirely clear.

Fireworks are illegal in the county. But Casper Fire Deputy Chief Cameron Siplon said the department still ends up responding to a handful of injuries and fires that start from their use each year.

James 'Mileage' Harrison, who died Sunday from injuries in a crash, advocated for biker safety, disability awareness and giving back to his community.

Fletcher Jowers, of Southwest Texas Junior College, gets comforted by his coach Joey Almand after being bucked before time Friday during the bull riding event at the College National Finals Rodeo at the Ford Wyoming Center. Almand and his wife Sugar Almand coach the rodeo team from Uvalde, Texas.

Joey and Sugar Almand, of Uvlade, pray together during the Cowboy Church service on the first day of College National Finals Rodeo on June 12 at the Central Wyoming Fairgrounds. The Almands coach a rodeo team at a college based in Uvalde. A gunman killed 21 people at Robb Elementary School there last month.

Will Farris, of Southwest Texas Junior College, heads to rig up his horse before the team roping competition Friday during the College National Finals Rodeo. Farris is one of two competitors at the CNFR hailing from the college in Uvalde, Texas. 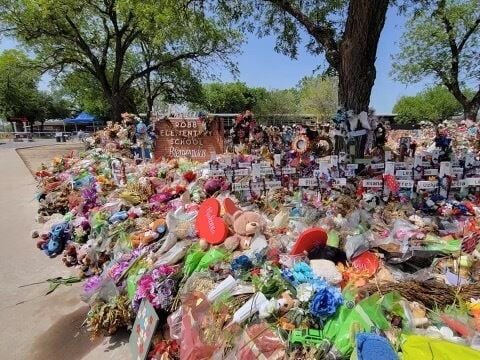 A memorial was created for victims of the May 24 shooting at Robb Elementary School in Uvalde.