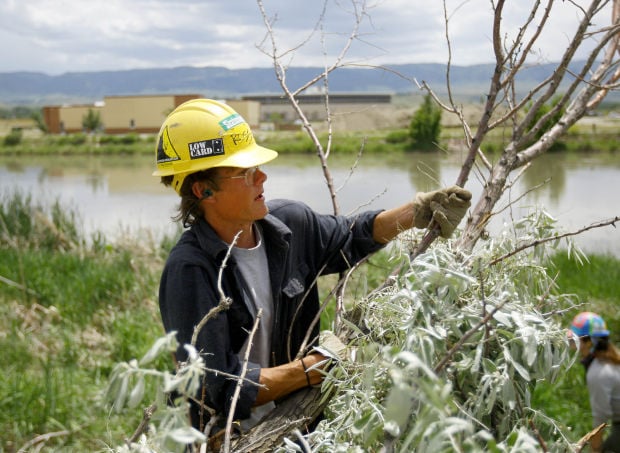 UW student Ross Bulawa hauls branches cut from a Russian olive while working with the Wyoming Conservation Corps to remove the invasive plants along the North Platte River in Casper. 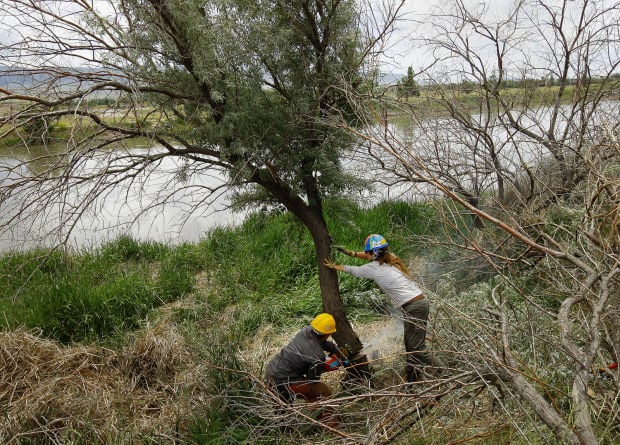 Brian Wasler and Lindsay Patrick cut down a Russian olive tree along the North Platte River on Thursday in Casper. Volunteers from the Wyoming Conservation Corps are working with the city of Casper to kill and remove the invasive, non-native trees.

The banks of the North Platte are under attack from a hardy tree that was once a staple for homeowners building windbreaks or otherwise looking for a fast-growing tree for their landscapes.

The Russian olive, listed as a noxious plant by the Wyoming Department of Agriculture, crowds out its native counterparts, accounting for more than 30 percent of the basin’s water consumption.

The tree’s seeds can lie dormant in the soil for three years. Once established, Russian olive is a tough opponent.

Members of the Wyoming Conservation Corps, a group of 18- to 24-year-olds from the University of Wyoming and as far away as Virginia, brought their skills to the North Platte to aide in the removal of the healthy stand of Russian olive growing along Platte River trails.

The corps used chainsaws and herbicide to combat the more than 15-foot tall trees growing in portions of the river bank.

“These are the worst trees ever,” said team member Ross Bulawa. “They’re a super-invasive species. We’re just trying to mitigate the inevitable. They’re really tough, and they just take over everything. You just have to close your eyes and chainsaw through to get to the tree.”

Bulawa, a junior who has a double major in environment and natural resources and American studies at the University of Wyoming, came to the state from Houston. He’s one of eight on the crew, which consists of people whose backgrounds range from engineering to dietetics.

WCC members work in conjunction with the University of Wyoming and Americorps, a civic engagement program that funds community service projects across the United States.

The task issued by Platte River Parkway is a challenge for the group.

“We’re used to cutting down beetle-killed pines,” said team leader Madison Graulty. “Your saw just kind of moves through that like butter compared to this, where it takes a good 20 minutes to cut down a tree instead of five. It’s a challenge, but our crew is motivated and looks at a challenge and gets the job done.”

The young conservationists are spending the summer traveling the state working to improve trails, build fences, remove invasive species and assist in the conservation of sage grouse.

By the end of the summer, they will have traveled to Lander, Curt Gowdy State Park, Guernsey and the Bighorn Canyon.

For the members, working with the crew is more than just a summer filled with manual labor.

“It’s about pushing yourself, just doing things you didn’t know you could do and having your teammates pushing you to do that,” crew member Lindsay Patrick said. “Pushing yourself past the brink was the biggest thing in all of this.”

Patrick, a University of Wyoming mechanical engineering major from Centennial, Colorado, was a chainsaw mechanic last summer. The small-engine experience has proved valuable with the WCC. Her skills help keep the most popular tool on the river in operation.

“Everyone switches off on sawing,” Patrick said. “It’s the most fun. The rest of the crew just tries to help out the person running the saw as much as possible. It increases the safety and morale.”

In many cases, the group’s conservation work wouldn’t happen without Americorps and the WCC.

“We’ve sat down, and the city has looked at it and scratched their heads on how to get this done, and they're helping as well by providing equipment,” said Platte River Parkway board member Keith Tyler. “But this is what these guys are trained to do, and it’s what they’re geared up to do, so we’re taking advantage of their skills.”

The WCC is modeled after the Civilian Conservation Corps, a part of President Franklin D. Roosevelt’s New Deal policy in the 1930s. At that time, the CCC provided jobs to many young men suffering without work during the Great Depression.

The group promoted a sense of community involvement and work to improve the natural environment in the United States.

“The CCC started that whole legacy of getting people out to work on the environment, and that’s what we’re doing,” said WCC field supervisor Sam Murray. “It goes back to that thought of the value of hard work. It’s a whole summer of character building. Hard skills aren’t what we’re really looking for. You can teach that, but you can’t teach the other traits.”

The group will complete its work on the North Platte River next week before continuing its travels in Guernsey.

Hard work remains to be finished over the summer, but the group members agree this is exactly the way they want to spend their summer.

“I don’t think any of us knew what we were getting into when we signed up for this, but I think we all love it,” Patrick said.

Olympians past & present reflect on Tokyo 2021

Troopers Drum and Bugle Corps to perform across the state

The sound of drums return to Casper this month.

Talkin' with Sal: Grateful and lucky

Casper Notebook: Through hate, looking for a bright spot

We talk about the state’s suicide rate — the highest in the nation — and how we can curb it. But then we have people sending death threats to a children’s magician, for no other reason than finding out she’s transgender.

"There's not a water crisis in town," Casper Mayor Steve Freel said. "It's not a matter of not having supply, we just have to go to great lengths of getting supply here."

The person who died after drowning in the North Platte River on Saturday evening was identified as Robert Uda, the Natrona County coroner conf…

Chattin' with Sal: From the first to the last

Jamie Purcell has worked for many nonprofits in Casper, including Girl Scouts, Troopers, Boys & Girls Clubs of Central Wyoming and Food Ba…

There’s a small audience in the stands of the Central Wyoming Fairgrounds Industrial Building arena on Wednesday, the first day of livestock s…

Electric scooters hit a detour on their road to Casper

All of the council members present Tuesday indicated they wanted a revised ordinance to allow the scooters downtown. Most also said they’d be in favor of changing more of the existing code, which now says people can’t ride bikes, skateboards, skates, scooters or other "toy vehicles" downtown, to allow those to be ridden in the streets in that area.

The event promises appearances from the congressional delegation, the national futurist Edie Weiner, and international entrepreneur Penelope Shihab, as well as a handful of local and regional experts.

Seeing the women in trouble, the deputy took off his gear, donned a life vest and swam out to help.

UW student Ross Bulawa hauls branches cut from a Russian olive while working with the Wyoming Conservation Corps to remove the invasive plants along the North Platte River in Casper.

Brian Wasler and Lindsay Patrick cut down a Russian olive tree along the North Platte River on Thursday in Casper. Volunteers from the Wyoming Conservation Corps are working with the city of Casper to kill and remove the invasive, non-native trees.