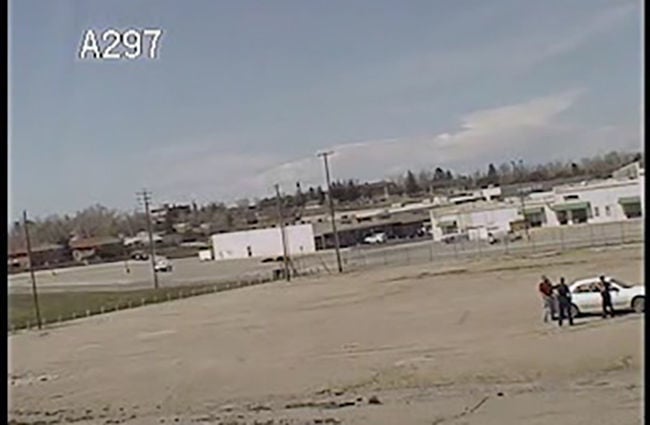 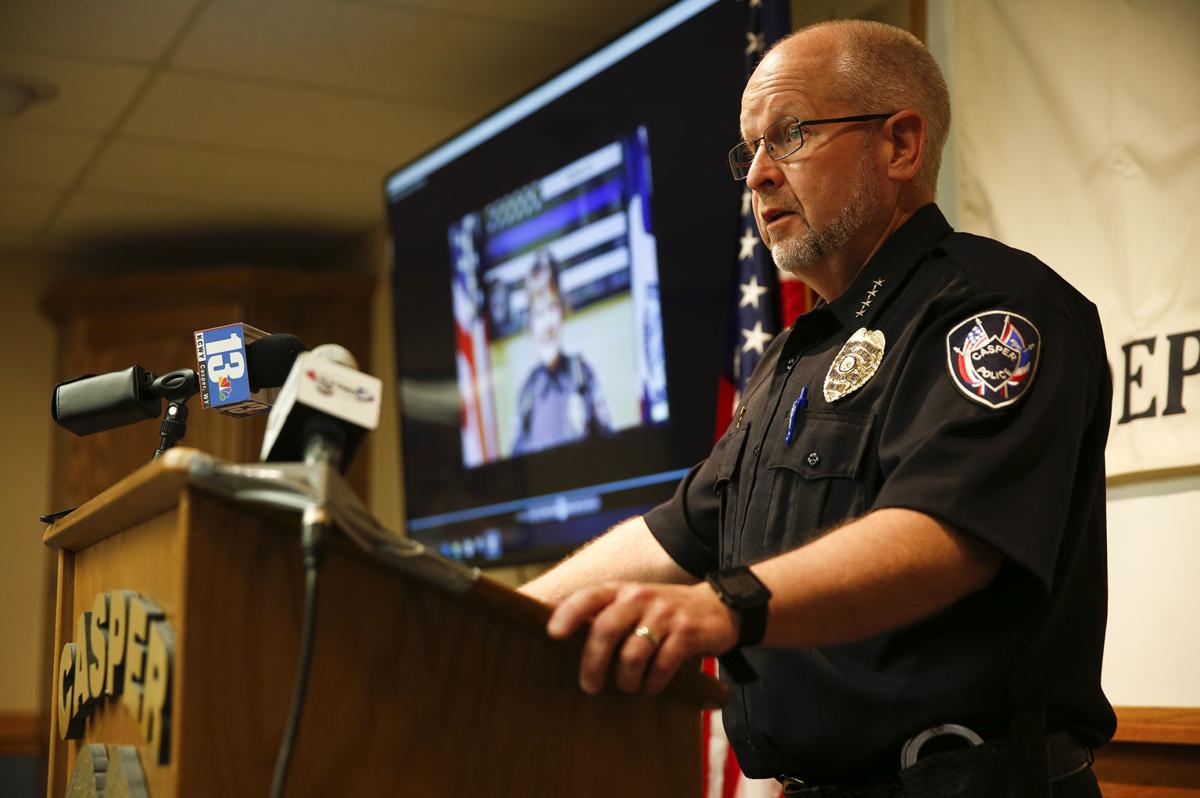 Casper Police Chief Keith McPheeters speaks with the media Wednesday during a press conference at the Hall of Justice. The department released video footage of the shootout that took place Sunday afternoon. 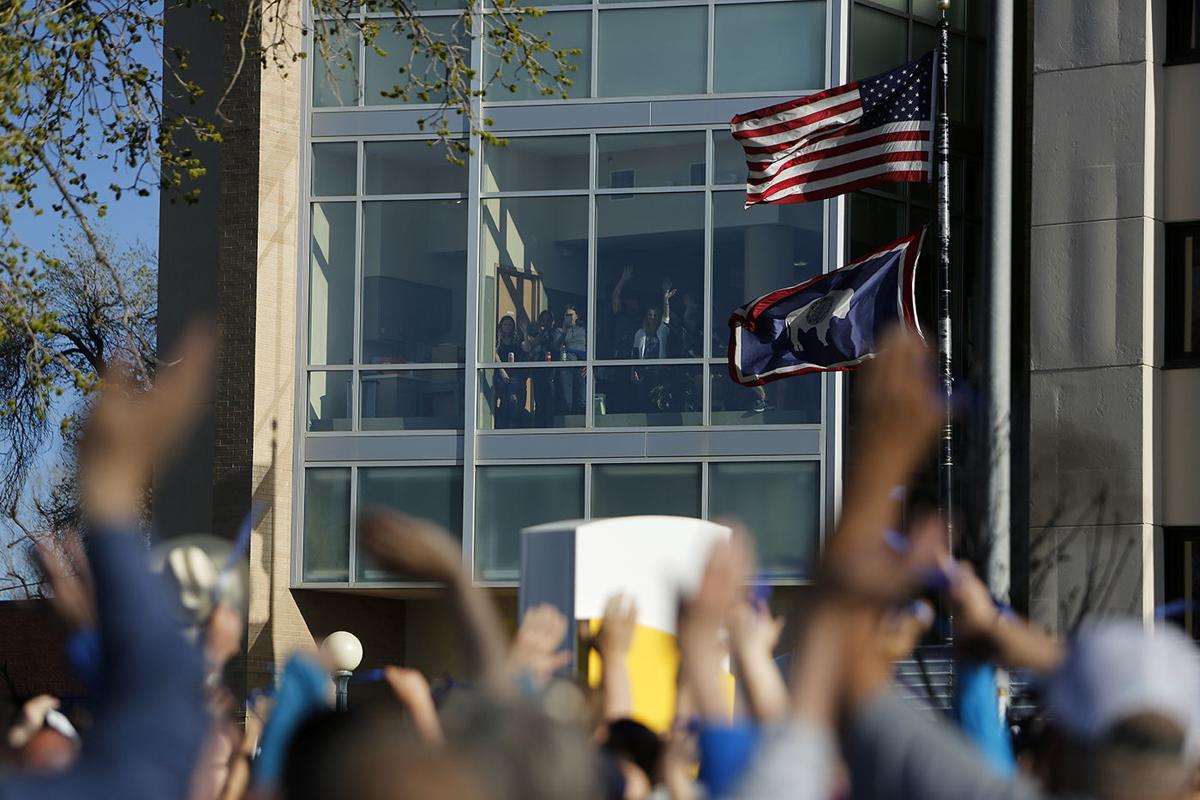 People wave to family and friends of wounded Casper police officer Jacob Carlson during a rally Tuesday across the street from Wyoming Medical Center. Carlson has undergone multiple surgeries, and as of Tuesday, had required more than 100 units of blood and blood products.

The Casper Police Department on Wednesday released video of officers Randi Garrett and Jacob Carlson engaging in a Sunday shootout in east Casper that left a man dead and Carlson severely wounded.

Garrett, a two-year veteran of the force, was not injured in the gunfight. Her coworker, Carlson, was struck by at least five bullets and remains at Wyoming Medical Center after suffering major injuries. The shooter, 38-year-old David P. Wolosin of Casper, died at the scene.

Reached through her attorney, Garrett said she was not ready to speak about the shootout.

“I want to thank the community for the outpouring of support,” Garrett said. “Please focus your prayers on my friend and fellow officer fighting for his life.”

McPheeters released video footage captured by a camera system mounted on the dash of Garrett’s vehicle. No audio was captured by the system.

The video below depicts the shooting. It may not be appropriate for all readers.

The shootout took place after police responded to a vehicle complaint near Fairdale Park on Sunday afternoon. McPheeters said officers had been called to the park because a 3-year-old was driving a car, with Wolosin in the passenger’s seat. Police have said Wolosin unexpectedly drew a gun and fired on officers.

In the video released at Wednesday’s press conference, Garrett arrives before Carlson at the dirt lot. After Garrett walks down a hill and spoke with Wolosin briefly, Carlson arrives and joined the two. Wolosin slowly walks backwards past the trunk of the car, effectively keeping both officers in front of him. When Carlson steps toward Wolosin and attempts to grab him, the man draws a gun and fires as he moves back. Carlson appears to return fire as he falls to the ground. Wolosin falls down and Carlson crawls behind the car.

Two more officers enter the frame holding long guns and Garrett walks toward the spot where Wolosin lies. She makes a kicking motion and bends at the waist before returning behind the vehicle to huddle around Carlson with other officers.

Garrett opens the passenger side door and helps the children out of the car and they run up a hill to their parents, who embrace them. The Star-Tribune did not include this part of the video on its website in an attempt to protect the identities of the underage children.

Police officials have turned over the inquiry to the Wyoming Division of Criminal Investigation, as is typical when police officers are involved in a shooting.

McPheeters said he was unaware of many of the details of the investigation, but offered what he characterized as his opinion on the events shown. The chief said the two officers acted heroically.

During the gunfight, Garrett was reaching toward the window to hold a child’s hand in an attempt to comfort them, McPheeters said. The police chief also said he believed Wolosin had attempted to flee. When officers tried to detain him, he began firing. Carlson was shot and wounded almost immediately after Wolosin began firing, McPheeters said.

“The only person endangering the children was the suspect,” McPheeters said. “There was no reason for the officers to believe that this was going to end up in a life or death experience.”

On Tuesday, DCI Commander Matt Waldock declined to comment on specifics of the investigation.

A lawyer representing the two officers involved in the shootout said Monday afternoon that Wolosin drew his gun when police tried to stop him from walking away. Carlson was shot in the back while seeking cover, Don Fuller said.

Waldock likewise declined to comment on Fuller’s description of the shootout.

On Tuesday, about 500 people attended a rally in Conwell Park, across the street from the hospital where Carlson is being treated, in support of the injured officer. After the department disclosed that multiple shipments of blood were brought in to Wyoming Medical Center due to Carlson’s extensive injuries, Casper’s United Blood Services clinic received a flood of donations. That outpouring of support continued online, with a GoFundMe.com fundraiser collecting more than $55,000 as of Wednesday afternoon.

Sunday’s incident is the second police shooting in east Casper in just over two months. In late February, police shot and killed a man carrying a sword after he threatened a clerk at a gas station on 15th Street and Wyoming Boulevard. Natrona County District Attorney Michael Blonigen cleared the two officers who were involved and concluded the man, Douglas Oneyear, provoked the confrontation in an effort to end his life. Fuller represented the officers involved in that shooting.

Oneyear’s family maintains the officers could have resolved the situation without killing him.

Editorial board: Casper Police Department deserves praise for being open and transparent with the public

A week ago, our community was stunned when a man shot a Casper police officer multiple times during what first appeared to be a minor traffic …

The moments before a Casper City Council work session are usually noisy and informal. Council members grab a cup of coffee or a soda from the …

A Casper police officer who was seriously wounded in the line of duty was released from the hospital Tuesday and is recovering at his home, Po…

An attorney representing police officers involved in Sunday’s shootout in Casper said the man who fired at police refused to talk, and when co…

The medical condition of Casper police officer Jacob Carlson, who suffered multiple gunshot wounds in a shootout on Sunday, is improving, the …

The Casper Police Department announced Friday that the medical condition of an officer injured in last weekend’s shootout continues to improve.

A Casper police officer wounded in a May 6 shootout is now breathing unassisted and can nod and shake his head in response to yes or no questions.

Tuesday’s police shooting in Casper was the third in six months, an unusual string of encounters for a city that can go years between incidents.

A Casper police officer seriously wounded in a May shootout will attend a Monday event held to honor him and his coworker, Police Chief Keith …

Two friends fought to stay alive in a Casper gunfight. But their struggle didn't end when the sirens faded.

Before four bullets tore up his insides, before his heart stopped beating on a hospital bed, before his shooting became the story of his adopt…

Looking back: A police officer nearly died in an east Casper shootout. Six months later, he made his return to work.

A police officer nearly died in an east Casper shootout. Six months later, he made his return to work.

Casper Police Chief Keith McPheeters speaks with the media Wednesday during a press conference at the Hall of Justice. The department released video footage of the shootout that took place Sunday afternoon.

People wave to family and friends of wounded Casper police officer Jacob Carlson during a rally Tuesday across the street from Wyoming Medical Center. Carlson has undergone multiple surgeries, and as of Tuesday, had required more than 100 units of blood and blood products. 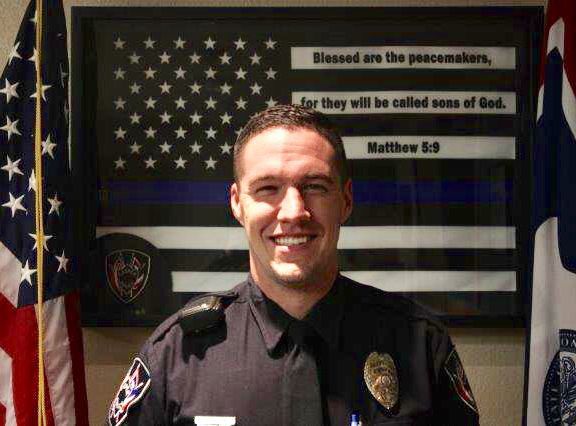 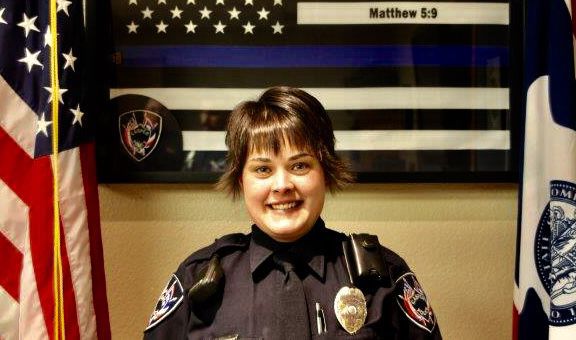