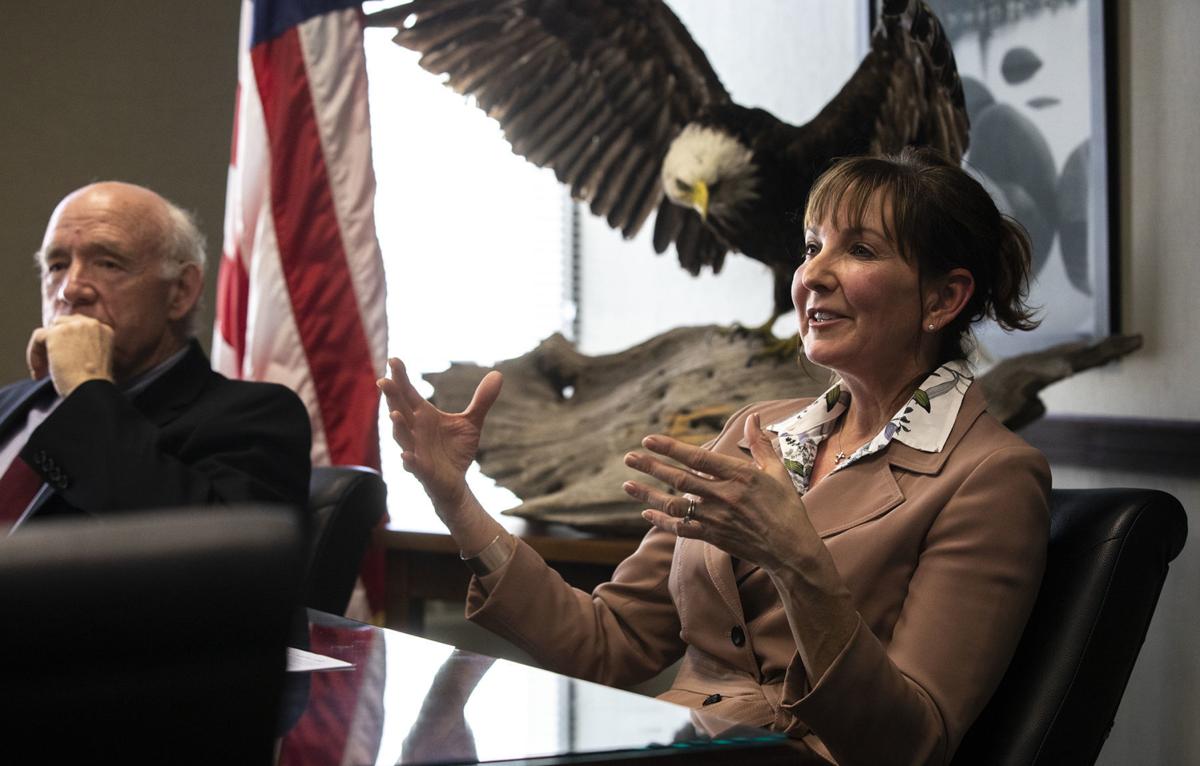 Assistant U.S. Attorney Stephanie Sprecher answers questions from the media Friday during a press conference at the Dick Cheney Federal Building following the conviction of Shakeel Kahn. Sprecher served as the lead prosecutor on the case. 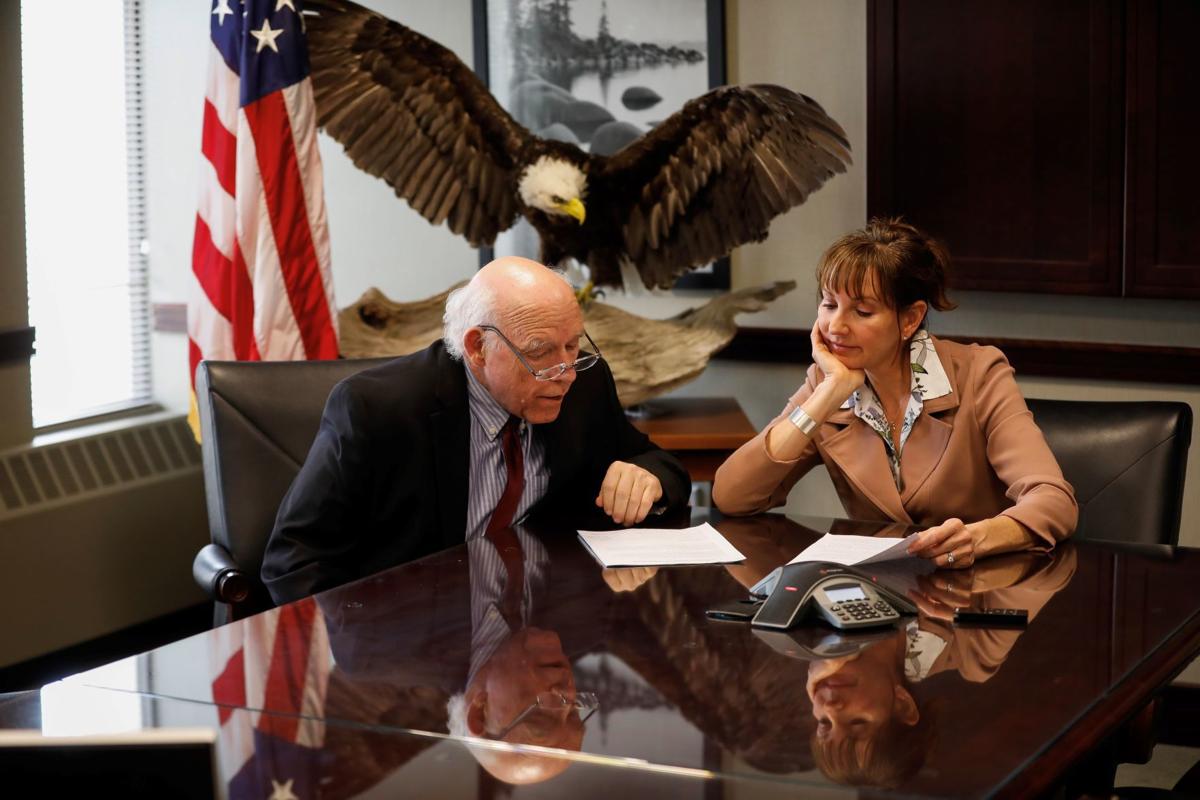 As Beau Brindley paged through a jury verdict form, five attorneys crowding around him craned their necks and leaned over his shoulders.

Brindley returned the form to Judge Alan Johnson and walked back to a defense table in Casper’s federal courthouse. He shared whispers with his client, Dr. Shakeel Kahn, before Johnson read the form aloud to the courtroom.

By the time Johnson completed his recitation, Kahn had been found guilty of all 21 felonies he faced, including an enhancement holding him responsible for the 2015 death of an Arizona woman. Two of the convictions — conspiracy to unlawfully distribute and dispense controlled substances resulting in death and engaging in a continuing criminal enterprise — carry a minimum sentence of 20 years imprisonment and a maximum of life.

The jury also found Kahn guilty of eight counts of unlawful distribution or dispensing of oxycodone, a single count of possession of a firearm in furtherance of a federal drug trafficking crime, five counts of using a telephone to commit or facilitate a felony drug crime, three counts of aiding or abetting the possession of oxycodone with intent to distribute, and two counts of money laundering.

Jurors determined the doctor’s brother, Nabeel — whose last name is alternately spelled Khan and Kahn in court documents — was guilty of both felonies he faced: one of conspiracy and one firearms charge. Jurors did not find Nabeel Kahn responsible for the Arizona woman’s death and their rejection of the enhancement to the conspiracy charge was the sole defense victory in the verdict.

After the judge had read the jury’s finding, the doctor’s wife, Lyn Kahn, broke into tears in the audience. A U.S. marshal asked Lyn Kahn, who testified for the prosecution during the nearly monthlong trial, to leave before marshals led the two men from the courtroom.

A look at the Shakeel Kahn drug case

Nabeel Kahn, two steps ahead of his brother, muttered, “It’s not over yet,” before walking through swinging doors and toward incarceration.

Moments later, Brindley told the Star-Tribune that he plans to appeal a series of issues raised during proceedings, including requests to suppress evidence, for acquittal and for modification to jury instructions. The Chicago defense attorney said — as he had throughout the case — that facts brought in the case would be more appropriately handled as a medical malpractice lawsuit. He said jurors should have acquitted his client.

“I am very disappointed with the jury in this case,” Brindley said, before leaving the courthouse with co-counsel Michael Thompson.

Assistant U.S. Attorney Stephanie Sprecher told the Star-Tribune shortly after the conviction she was pleased with the verdict. Kahn “preyed on” addicted people for years, and the verdict confirmed that a person’s profession does not put them above the law, she said in a courthouse hallway.

The verdict marks the conclusion of an investigation that was first made public with federal agents’ arrest of the doctor in November 2016 at his Casper home, and a trial that spanned one day shy of a full month.

Sprecher said law enforcement spent 21,000 hours on the case, a number that does not include work by prosecutors from the U.S. Attorney’s Office or the Natrona County District Attorney’s Office, which prosecuted a related set of drug cases. Sprecher and co-counsel Stephanie Hambrick used more than 10,000 pieces of evidence in the federal prosecution and called more than 30 witnesses.

On Friday, the doctor took the stand and — over the course of two days — told jurors that he had tried to act in his clients’ best interest as he operated a pain management clinic with offices in Arizona and Wyoming. He insisted his treatment methods were medically appropriate, and his attorney maintained his client had been set up by co-defendants who wanted to improve their standing with federal prosecutors.

Prosecutors, however, presented evidence showing Kahn wrote nearly 15,000 prescriptions for controlled substances, totaling roughly 2.2 million pills, nearly half of which were oxycodone. Among the prosecution’s witnesses were the doctor’s wife and two former patients who have also pleaded guilty to federal charges and agreed to testify against him.

Jurors began deliberations Wednesday morning, but they had to restart their work Thursday after one member of the panel was dismissed. Courtroom minutes filed Thursday night referenced a “juror in distress.” That juror was dismissed in the morning, and the reconstituted jury restarted its work just after lunch Thursday. The final set of seven women and five men who considered the evidence took about eight hours to return a verdict.

At a Friday afternoon press conference, Sprecher said that, to the best of her knowledge, no doctor has been previously convicted in federal court of engaging in a continuing criminal enterprise.

Assistant U.S. Attorney Stephanie Hambrick, who served as co-counsel, was not present for the verdict or press conference.

David Kubichek, who assisted with the prosecution of the case and was at the verdict announcement but is not listed in court filings as an attorney of record, said that although bringing the charge against a physician is novel, the decision to do so was straightforward.

“He is kind of the picture in the dictionary for this,” Kubichek said. “(The prosecution is) unique in the sense that no one’s done it yet — that we know of — but certainly for this kind of case it’s a perfectly appropriate charge.”

U.S. Attorney Mark Klaassen, who called in to the press conference from Cheyenne, said his office recognizes the legitimate medical purposes of opioid painkilers. He said, however, that his office is prioritizing illegal opioid distribution, both in the form of street drugs like heroin and improper prescription of drugs like oxycodone.

“This prosecution should serve as a warning to anyone who may be tempted to abuse that prescribing authority,” Klaassen said. “We simply can’t tolerate those who exploit people with addictions to enrich themselves.”

The Kahn brothers are set to be sentenced Aug. 1 at a series of hearings in Cheyenne’s federal courthouse.

A federal prosecutor peppered Kahn with more than five hours of questions in an often combative cross-examination that saw the doctor call people who testified against him "a bunch of liars."

The 2015 death of an Arizona woman was the result of a drug cocktail prescribed by former Casper doctor Shakeel Kahn, federal prosecutors say.

Feds ask for $500,000 of Casper drug doctor's money along with houses and cars

A Casper doctor’s wife, who took a plea deal on the eve of her husband’s drug conspiracy trial and then served as a prosecution witness, has a…

The defense team argued that warrants issued in Wyoming relied on outdated information taken from a wiretap and were unduly broad.

Assistant U.S. Attorney Stephanie Sprecher answers questions from the media Friday during a press conference at the Dick Cheney Federal Building following the conviction of Shakeel Kahn. Sprecher served as the lead prosecutor on the case.