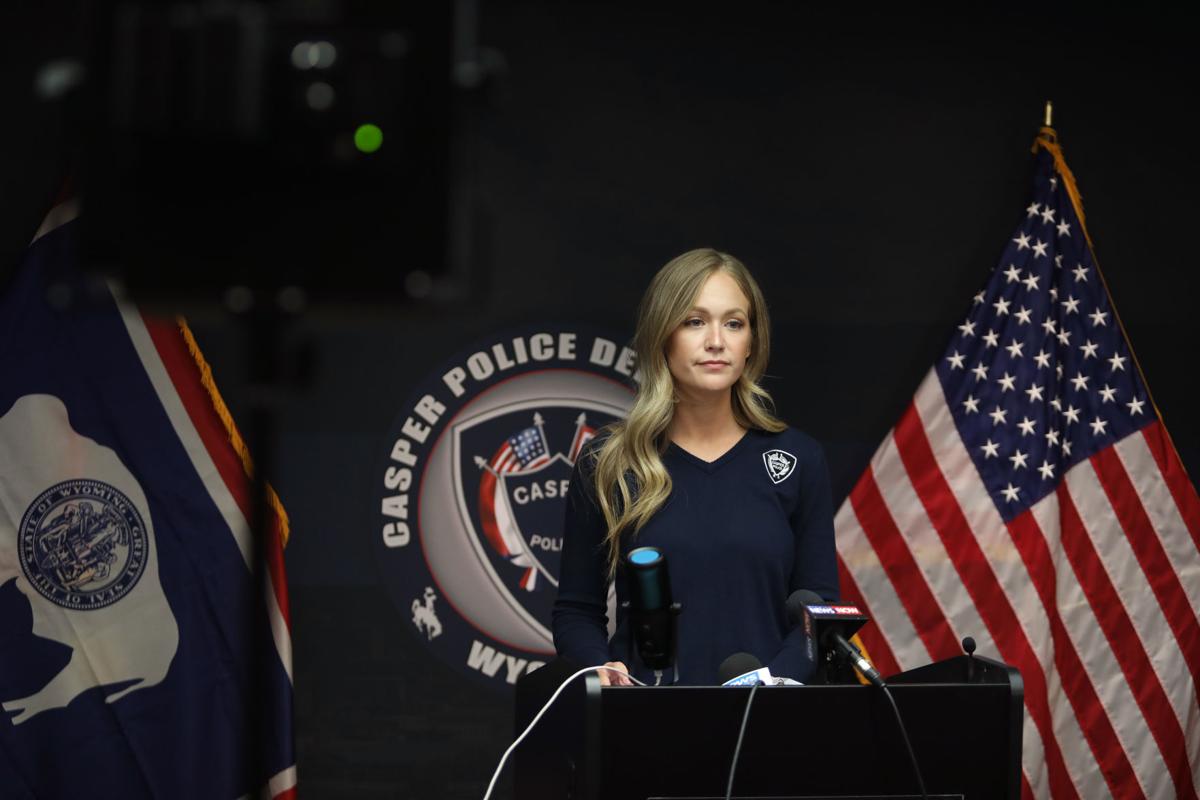 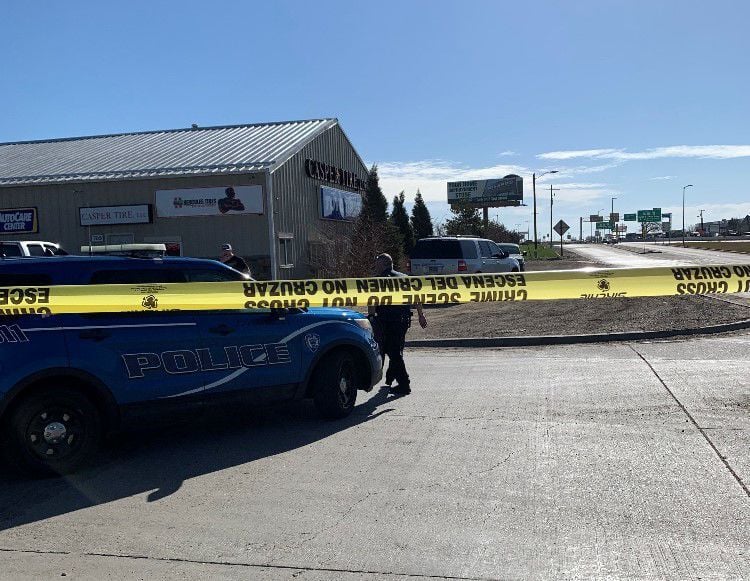 Casper police are seen May 6 near F Street after a police shooting led to closures on Interstate 25. The Casper Police Department has identified the officer who fatally shot a man, as well as the other officer involved in the incident.

No officers will be charged for a May police shooting that killed a Casper man after a traffic stop escalated and the man began driving himself and an officer into oncoming traffic on I-25.

During a press conference Friday, Casper police spokesperson Rebekah Ladd said that a Division of Criminal Investigation report reviewed by District Attorney Dan Itzen found the shooting was justified for the officer’s safety and for the safety of others around the scene.

Officer Jake Bigelow shot and killed 42-year-old Casper resident Thomas Roeber in the early hours of May 6 while Roeber was driving himself and Bigelow the wrong direction on the interstate.

Bigelow and the other officer on the scene, Officer Andrew Linkowski, were conducting a traffic stop near East H and North Elma streets just before 4 a.m. on May 6 when the driver unexpectedly got out of the vehicle and stated he didn’t have anything to do with the situation.

Ladd said Friday that the officers noticed there was a license plate violation on the vehicle, and were planning on conducting a stop when the car pulled over on its own. Casper Police Chief Keith McPheeters said during the press conference that the officers also noted the car’s occupants’ “unmistakable reaction” to seeing the police car, which made the officers suspicious.

During the stop, officers saw a backpack in the back of the vehicle and noted that Roeber gave a misspelling of his name after failing to produce identification or registration documents for the car. McPheeters said this added to the officers’ suspicion.

Roeber, who had been sitting in the passenger seat, moved behind the wheel while Bigelow tried to grab him. Roeber then reportedly pulled the officer into the vehicle and began driving, trying to flee the scene, when he entered I-25 by driving up an off-ramp.

Bigelow told Roeber to stop multiple times, and attempted to stop the car by putting it in park. This, according to police, only damaged the car’s transmission while it was still driving. After 73 seconds in the car, Bigelow shot Roeber, then pulled the vehicle to the side of the interstate. Officers attempted life-saving measures on Roeber until an ambulance arrived approximately six minutes later.

“The officer does not have to wait to become a further victim before using deadly force,” a letter from Itzen reads. “Given what the officer had just gone through, it was reasonable for him to believe his life was still in danger.”

No criminal charges have been brought against the driver of the vehicle, who has not been identified. Casper Police Chief Keith McPheeters said the driver was cooperative with the investigation.

According to Ladd, police searched the vehicle and found around an ounce of methamphetamine and two glass pipes.

McPheeters said Friday that the investigation found that Roeber rolled up his window during the traffic stop, put the vehicle in drive and told the driver to go. At that point, the driver left the car.

Both Bigelow and Linkowski were placed on administrative leave following the shooting, as per the department’s policy. Neither officer reported any injuries.

Linkowski joined the force in Casper in December. McPheeters said Friday that Linkowski’s time on leave was relatively short, and he has since completed training and returned to the street.

Bigelow has been a senior officer at the department since March 2019. Before that, he worked as an officer in Mills, where he shot and killed a man in 2016 who had been shooting at neighbors’ houses in Casper. Then-District Attorney Mike Blonigen’s investigation into the shooting found it was justified.

McPheeters said Bigelow has been on restricted duty, working in the department’s office, but is set to return to active duty next week.

The Casper Police Department released footage of the incident taken from both officers’ body cameras, an in-car camera and nearby surveillance cameras. The footage is extremely graphic and will not be posted to the department’s social media or web platforms, but is accessible for those who want to see it through a link on their Facebook page.

Below is a description of the events depicted in the video. Discretion is advised, and readers should be warned that its contents are violent and may be disturbing or traumatizing. The video itself contains graphic images and some profanity.

The video begins with dashboard camera footage showing the patrol car following another vehicle, then pulling over behind it and putting on its lights.

Bigelow can be seen approaching on the passenger side of the car and shining a flashlight inside, while Linkowski walks to the driver’s side. The feed switches to Linkowski’s body camera, and the driver can be heard saying he does not have his license on his body. Both occupants tell Linkowski their names, and the officer returns to the patrol car to run them through the database.

Less than two minutes later, the driver is seen getting out of the car with his hands up.

“I’m not part of this,” the driver says.

Linkowski directs him to sit on the ground, while Bigelow is seen opening the car’s passenger side door and entering the car as if pulled. The car, with its door still open, then speeds off.

Linkowski gets back into the patrol car and starts following the car and relaying information to a dispatcher over the radio.

“They’re fleeing and he’s in the vehicle,” Linkowski tells the dispatcher.

The car with Roeber and Bigelow is seen driving the wrong direction on I-25 before it pulls over to a patch of grass on the left and comes to a stop.

Next, the video shows the same period from Bigelow’s body camera. He has a brief conversation with the driver while Roeber is reclined in the passenger seat and appears to be pulling up something on his smartphone.

Bigelow then asks Roeber to get out of the car to talk with him. Roeber rolls up his window.

Bigelow repeats he’d still like him to exit the car.

After seeing the driver get out of the car, Bigelow pulls a gun and opens the passenger door.

“Don’t do it, don’t f—-ing do it. I will f—- — show me your hands right now,” Bigelow can be heard saying as his body camera shows a struggle between himself and Roeber while the vehicle is still in motion. His voice quickly escalates into a yell, and Roeber cannot be heard in the video if he is speaking at all.

Roeber can be heard saying something that sounds like, “shoot me,” in a muffled voice.

“Shoot me then,” Roeber says.

According to police, at this point Roeber appeared to be reaching his arms behind his seat to pick up what appeared to be a gun-like object to Bigelow.

As the car slows, Bigelow appears to yell out of the window that shots were fired.

Bigelow briefly talks with Linkowski, who then pulls Roeber out of the car by his arms and onto the ground.

“I’m good, I’m not hit, I thought for sure he was pulling a gun on me,” Bigelow says to other officers arriving at the scene.

Officers can be seen attempting to perform CPR on Roeber. Shortly after, an ambulance arrives and transports Roeber to Wyoming Medical Center.

Despite COVID-19 and logistical woes, Tokyo 2020 to be the most inclusive Olympics

Casper police say the suspect fled the scene with an officer inside the vehicle, driving the wrong way down Interstate 25. The officer then shot the driver.

According to District Attorney Dan Itzen, the shooting was justified and the officer would have reasonably believed his life was in danger.

Casper police are seen May 6 near F Street after a police shooting led to closures on Interstate 25. The Casper Police Department has identified the officer who fatally shot a man, as well as the other officer involved in the incident.