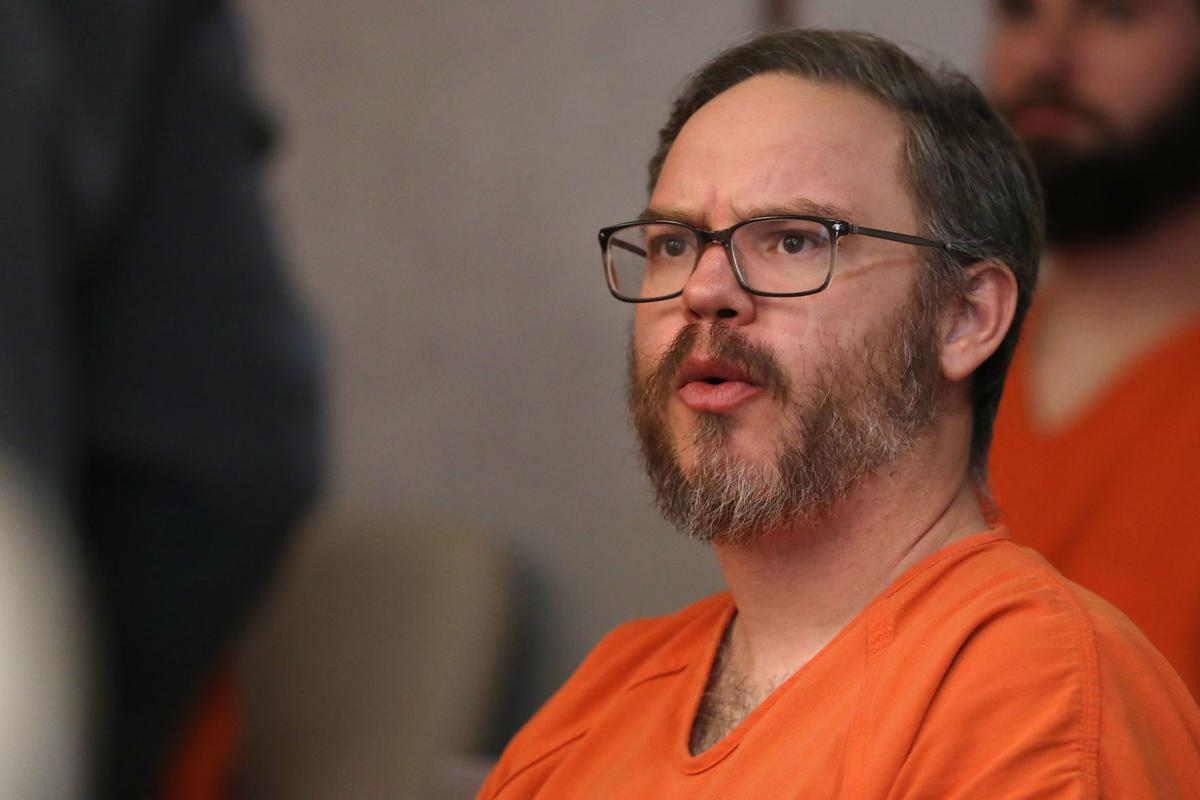 Jason Waugaman, 36, talks with his lawyer before his initial court appearance Jan. 17 in Casper. The Dean Morgan Junior High School tutor faces three felonies alleging he had sexual contact with a student. 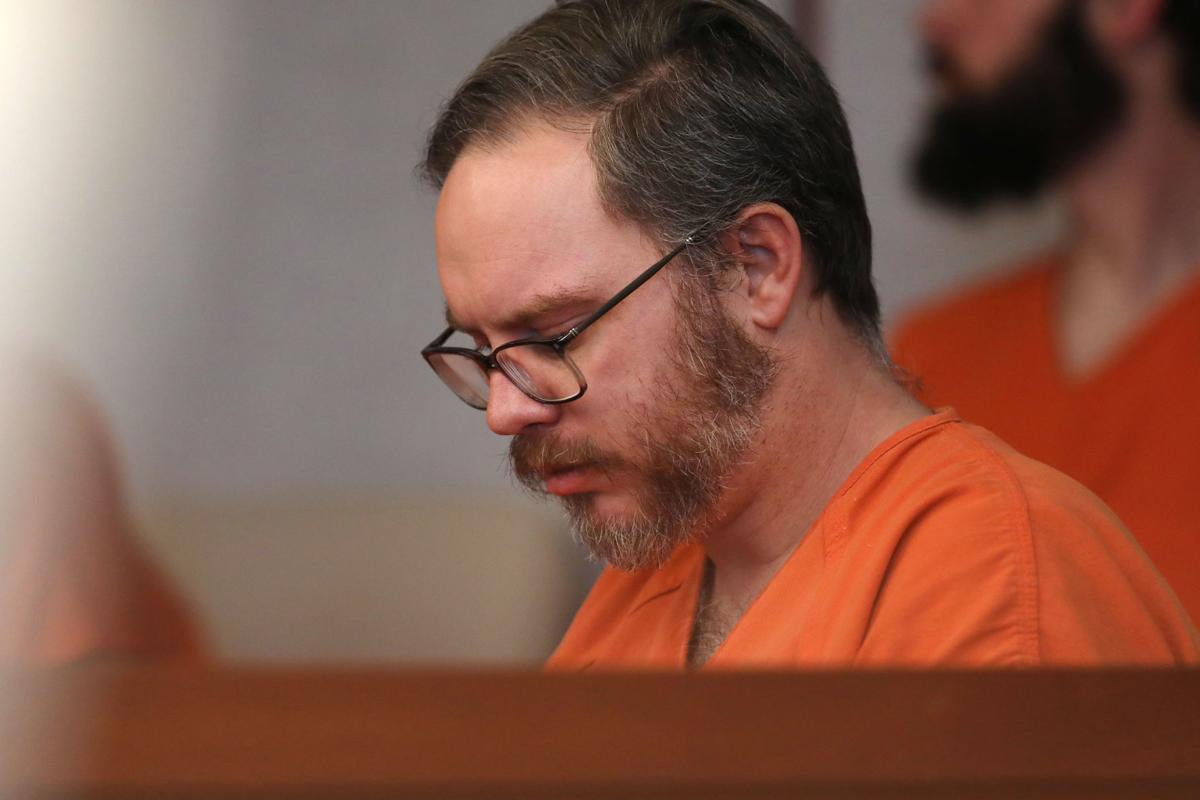 Jason Waugaman, 36, waits for his name to be called during his initial court appearance Friday in Casper. The Dean Morgan Junior High tutor faces three felonies alleging he had sexual contact with a student. 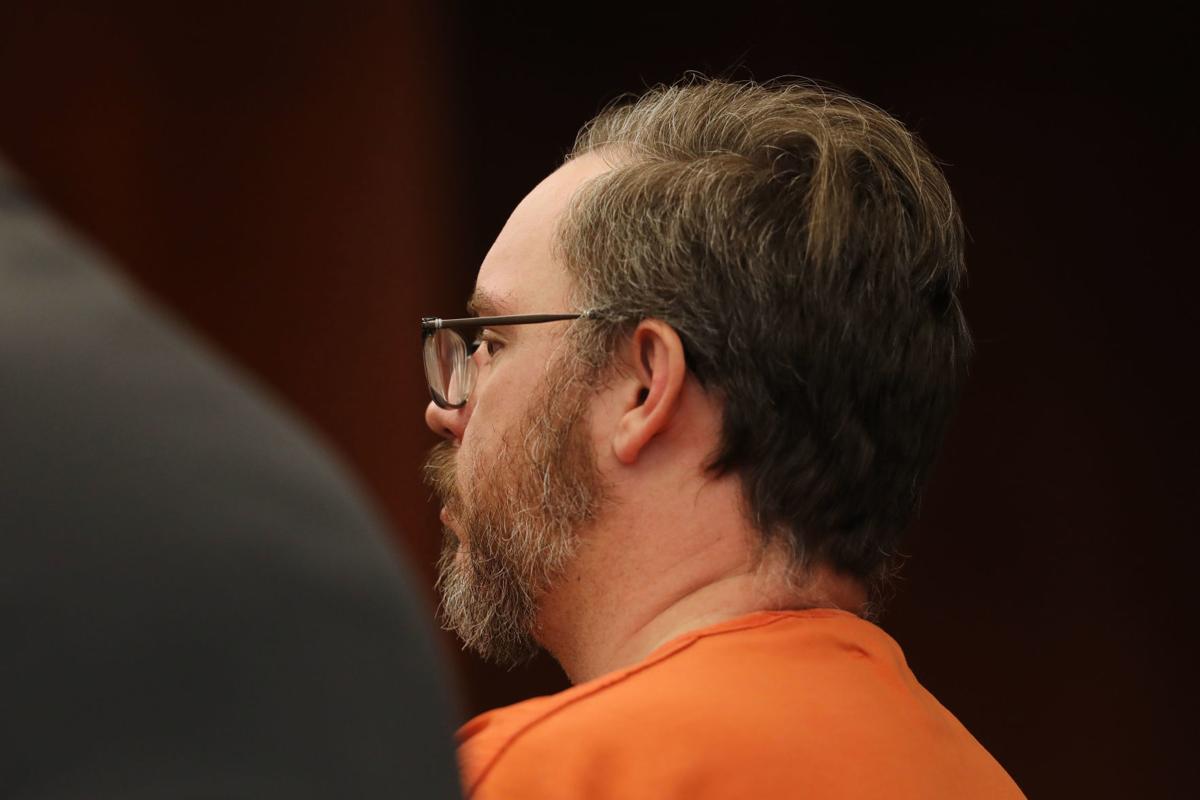 Jason Waugaman, 36, listens to the judge read through his charges and set bail at his initial court appearance Friday, Jan 17, in Casper.

Prosecutors on Friday afternoon charged a tutor at Dean Morgan Junior High School with three felonies alleging he sexually abused a former student in 2016 after allegedly sending sexual messages to the victim when she was 14.

Jason G. Waugaman, 36, appeared wearing jail garb Friday in Natrona County Circuit Court, where prosecutors charged him with three counts of sexual abuse of a minor: two of second degree and one of third degree.

The court appearance came one day after Casper police announced they had arrested a Natrona County School District employee on suspicion of sexual abuse of a minor. The agency revealed few additional details at the time. Police said then that they thought the employee had committed the abuse in connection with his employment with the district.

The alleged abuse dates to 2016 and involved a child that was between 13 and 15 at the time, according to the charges read during the afternoon hearing and printed in court documents.

In an affidavit filed by authorities to support the charges, police allege that Waugaman began messaging a seventh-grader after substitute teaching in her class during the 2014-15 school year.

According to the affidavit, the two communicated via Snapchat — the phone messaging app known for the ephemeral nature of its messages — for years, the teenager told police. The alleged victim told police that shortly after she began messaging the tutor, Waugaman began making sexual comments and telling her that he loved her. Waugaman asked the girl to send him nude photos of herself and she did so, the documents state.

During summer 2016, when the girl was 14, Waugaman allegedly met up with her outside of her apartment. The two had sexual intercourse in the back of his car, the affidavit states she told police. Under Wyoming law, a 14-year-old is incapable of consenting to having sex with an adult. They continued to talk over Snapchat for the next several months.

When the alleged victim — who is now an adult — told police about the incident, a detective asked her if she would re-establish contact with Waugaman. The two exchanged messages in which Waugaman allegedly graphically described the night in July 2016, the documents state. According to the documents, he told her that he “wished they could do it again.” In a follow-up phone call made on Jan. 15, which was overheard by a detective, Waugaman said he loved the victim and asked if she was 18.

Waugaman was picked up the next day and brought to the Casper Police Department for an interview. In his conversation with police, which is detailed in the report, Waugaman allegedly said his relationship with the teenager was “strictly professional.” He said he had received nude photos of her but that the images were deleted. He denied using social media to contact any other students.

Waugaman told police that he had never talked to the victim “about topics of a sexual nature,” nor did he “sext” with the victim. He was then placed under arrest.

At Waugaman’s initial court appearance Friday, a judge set his bail requirement at $10,000 and allowed him the opportunity to hire a bail bond agent.

As of his court appearance, Waugaman appeared to still be employed by the district; he is listed in the district’s online staff directory, and he wasn’t included earlier this week on a list of recent separations published by the district. He is not on any of the separation lists dating back to September.

During the brief court appearance, Waugaman had already been assigned a lawyer. He remained in his seat when Judge Steven Brown called his case. Marty Scott, the public defender representing Waugaman, walked to a lectern in the center of the courtroom, before calling for Waugaman to join him. The tutor did, standing slightly askew of his attorney, his back to the courtroom audience.

Assistant District Attorney Sam Forshner told the judge that allegations made by police to support the charges were “very disturbing,” but he did not describe them in any greater detail than the formal charging language Brown had read. The prosecutor asked Brown to set bond at $75,000.

Scott, however, said that police had identified one alleged victim, to which all three charges pertain. He said his client had no prior criminal history and asked for a $10,000 bail setting. The judge chose the defense attorney’s recommendation and ordered Waugaman to not have contact with minors if he bails out.

District spokeswoman Tanya Southerland had not responded to an email seeking clarification on Waugaman’s employment status by the end of business hours Friday. In past cases where employees have been charged with a crime, the district has placed them on administrative leave. In those instances, the district has waited for criminal proceedings to conclude before launching its own investigation and determining if the employee should be terminated.

A message left for Verba Echols, the district’s associate superintendent for human resources, was not immediately returned. In a brief Friday afternoon phone interview, the district’s incoming superintendent, Mike Jennings, directed the Star-Tribune to contact Southerland and then hung up.

The district has put in place safeguards to “preclude the suspect from having further access to students,” according to the Thursday afternoon police statement. Southerland did not respond to an email asking what and when safeguards were put in place.

In the statement, the Casper Police Department said the arrest — of an employee identified only as an adult male — had taken place the same day. A police spokesman said on Friday morning that the man was not arrested at a school. Agency representatives declined repeated requests for further information about the alleged crime.

After being questioned on social media as to why the department did not identify the school or other location where the suspect worked, police put out an additional statement Thursday evening. In it, the department acknowledged the frustration in the community but said it was prohibited by state law from releasing information that would make the suspect’s identity apparent.

The school district released its own statement late Thursday afternoon. In it, the district said it would continue to work with Casper police.

“The Natrona County School District is committed to providing safe and healthy learning environments for students, staff and school visitors,” the district wrote. “We are incredibly appreciative of the superior policing services and commitment to the safety of our community as provided by the Casper Police Department.”

Southerland declined Thursday to provide additional information and reiterated that the district had instituted safeguards “to ensure the individual does not have access to students.”

Parents who spoke to the Star-Tribune outside of Dean Morgan on Tuesday were split on whether the school district handled the incident acceptably.

The attorney cited a state law that blocks public officials from disclosing information that may lead to the identification of a person accused of sexual misconduct before that person is formally charged in district court.

The school district says it became aware of the case on the day of Jason Waugaman's arrest.

The latest police statement leaves open the possibility that Jason Waugaman could be charged with additional crimes pertaining to newly discovered victims.

Jason Waugaman appeared in court free on bail while responding to the sexual abuse charges.

Jason Waugaman, 36, talks with his lawyer before his initial court appearance Jan. 17 in Casper. The Dean Morgan Junior High School tutor faces three felonies alleging he had sexual contact with a student.

Jason Waugaman, 36, waits for his name to be called during his initial court appearance Friday in Casper. The Dean Morgan Junior High tutor faces three felonies alleging he had sexual contact with a student.

Jason Waugaman, 36, listens to the judge read through his charges and set bail at his initial court appearance Friday, Jan 17, in Casper.