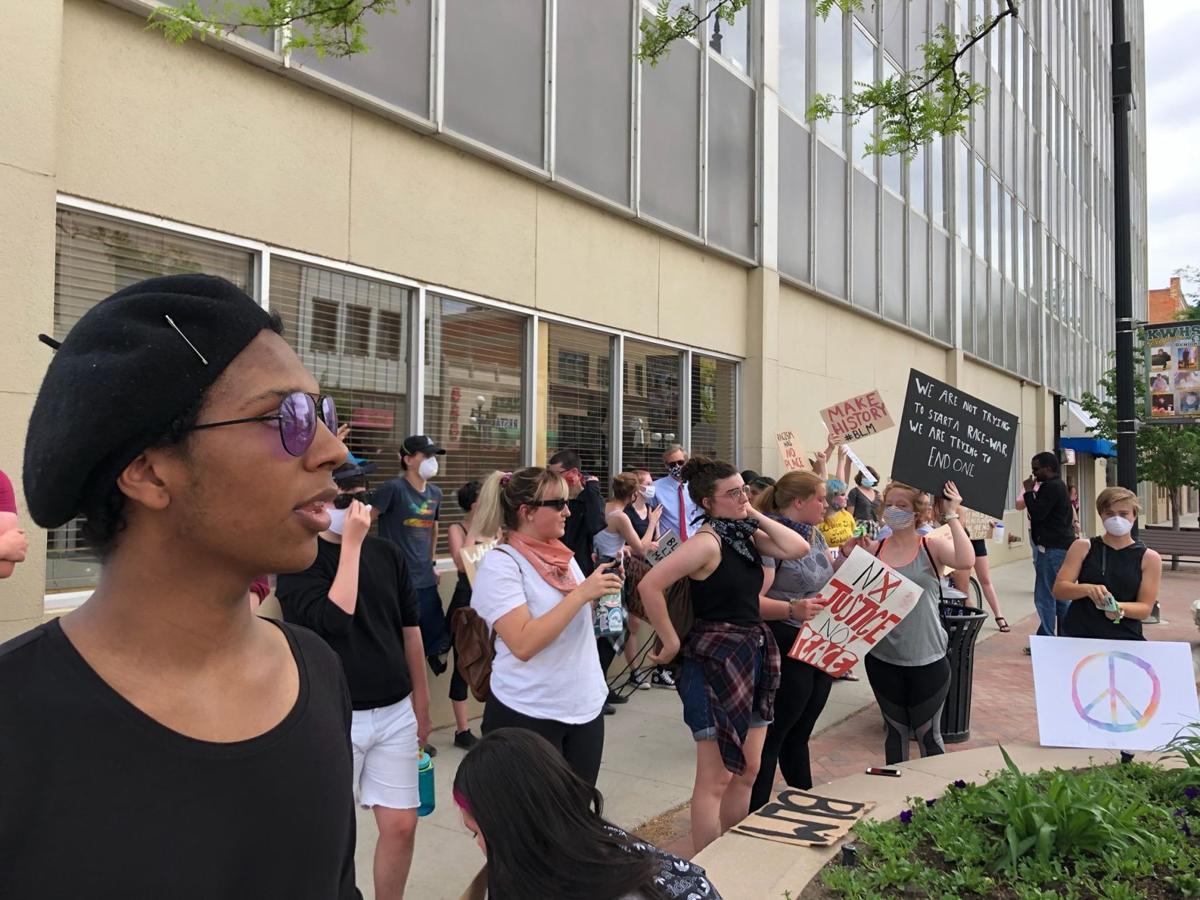 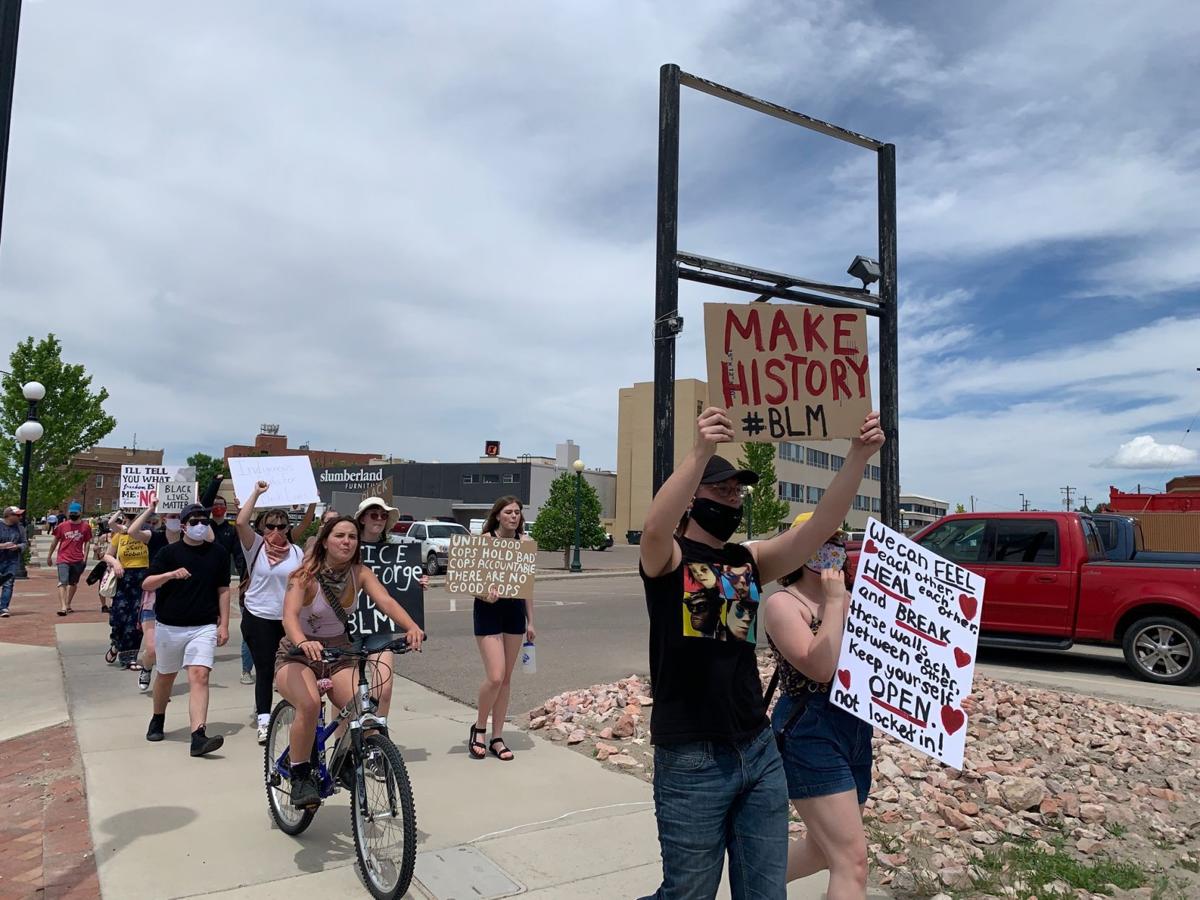 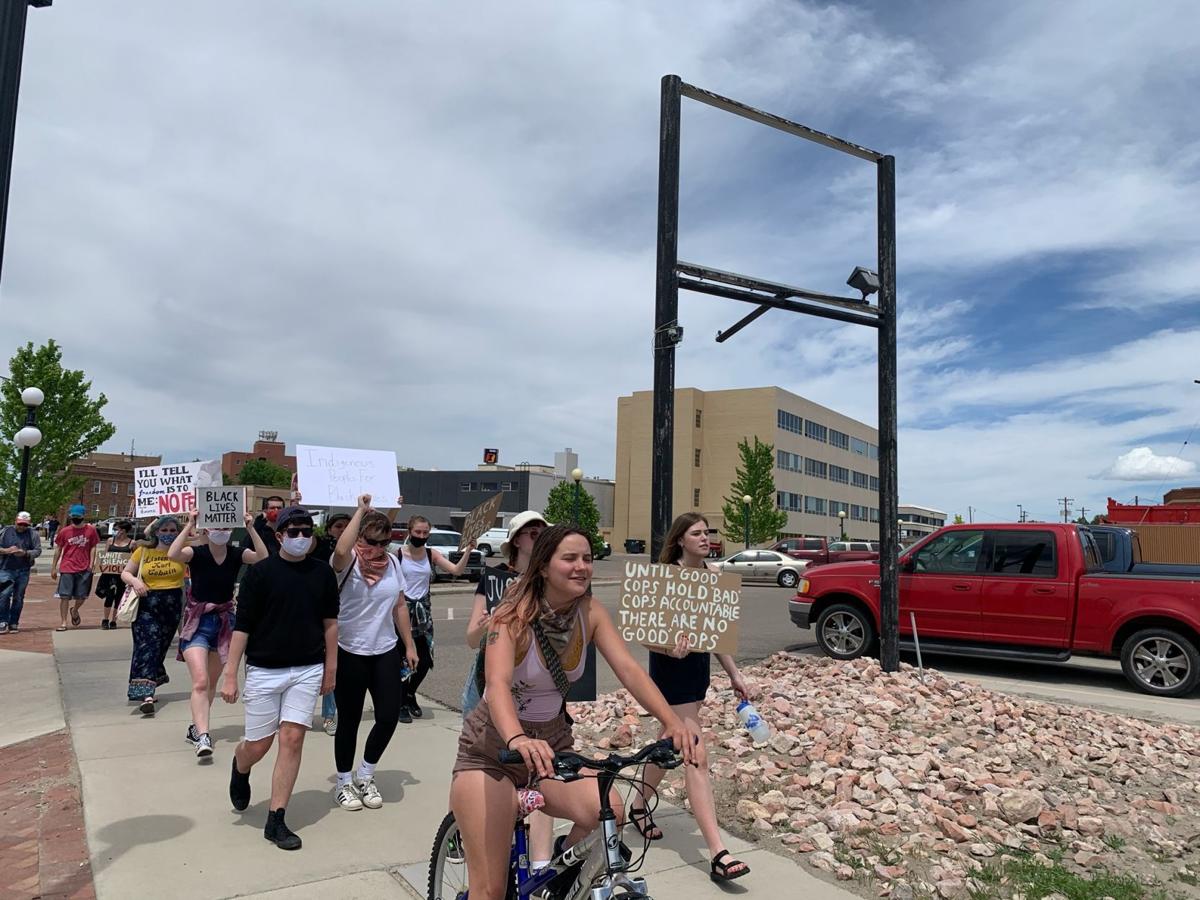 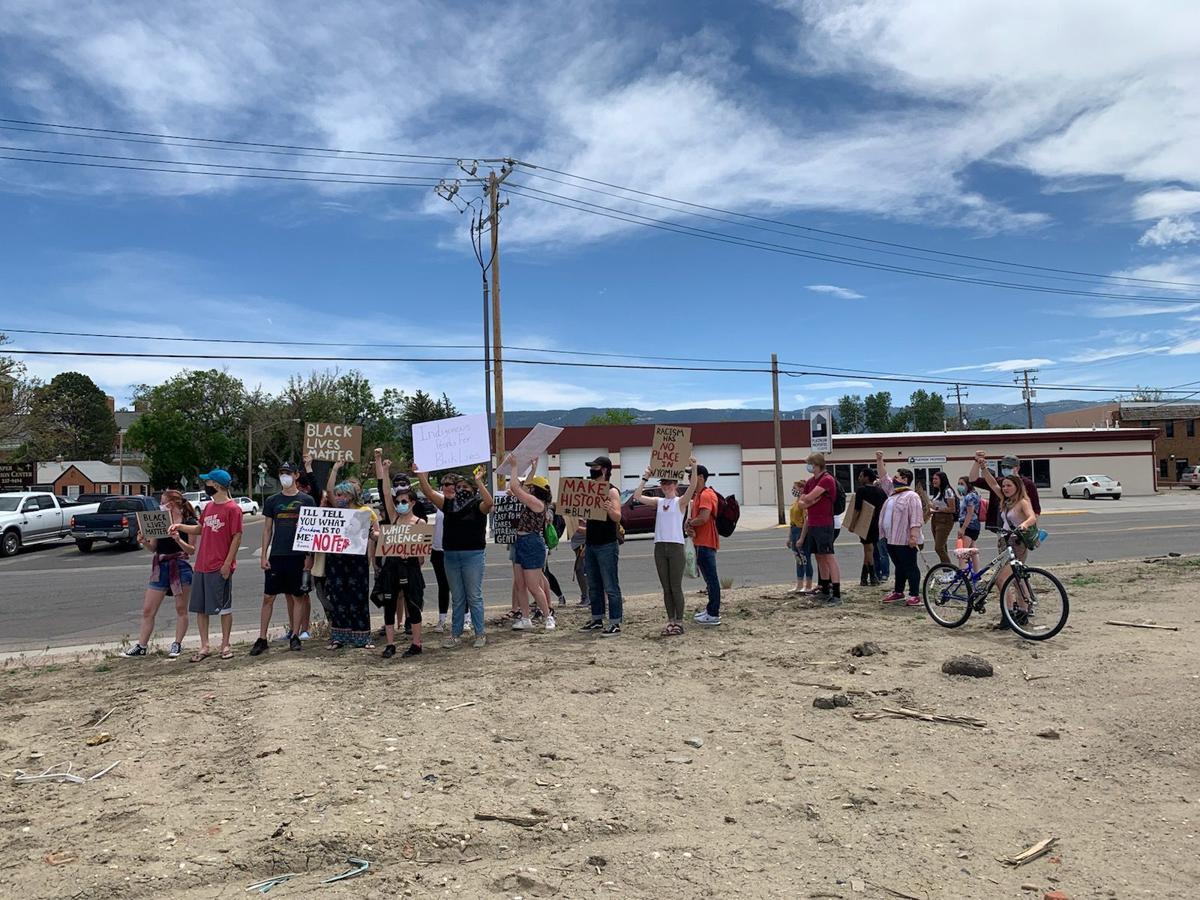 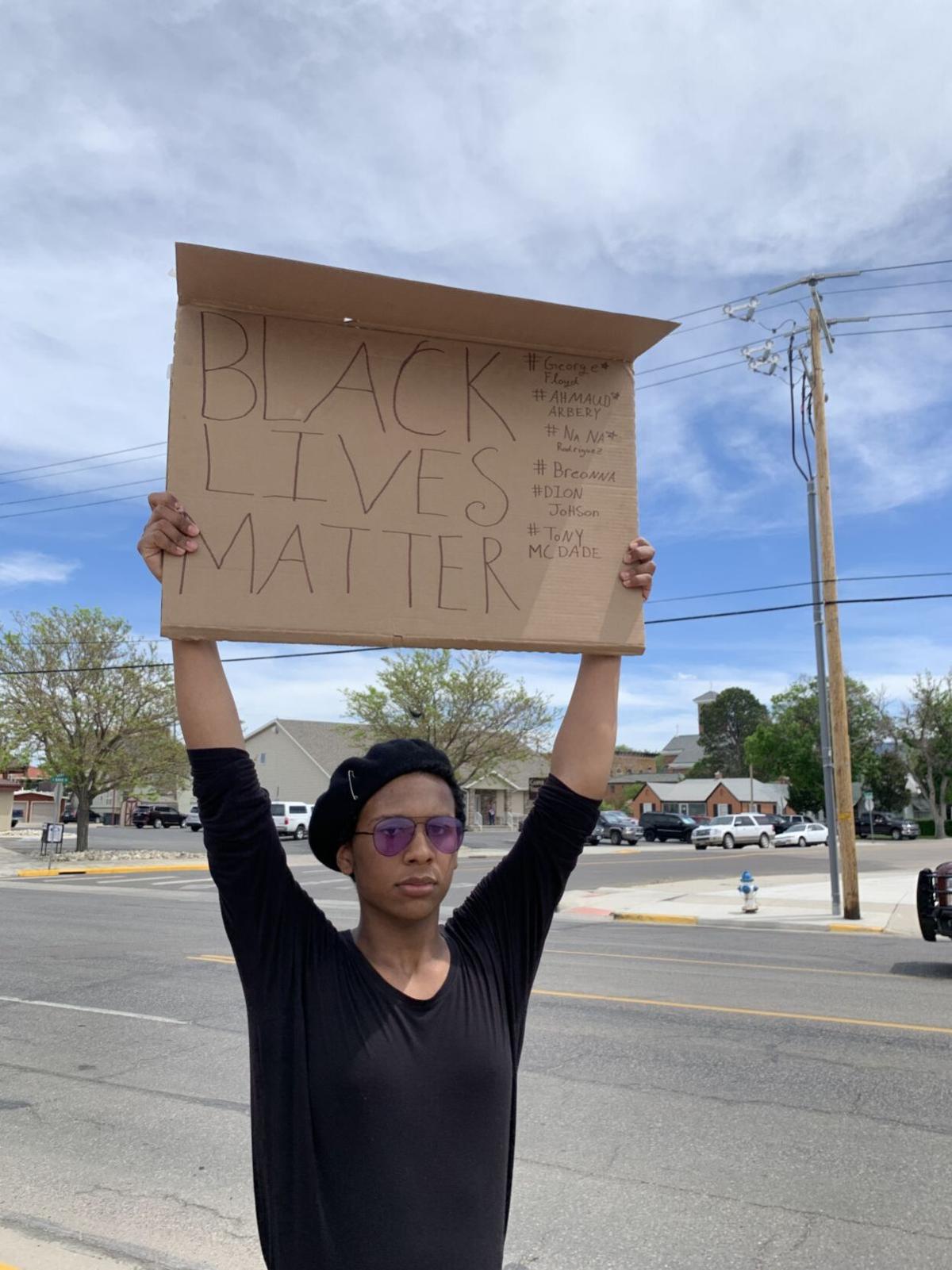 Dauvi Thompson-Rodriguez, organizer of a Tuesday afternoon demonstration in downtown Casper on June 2, 2020, holds up a sign that reads "Black lives matter." 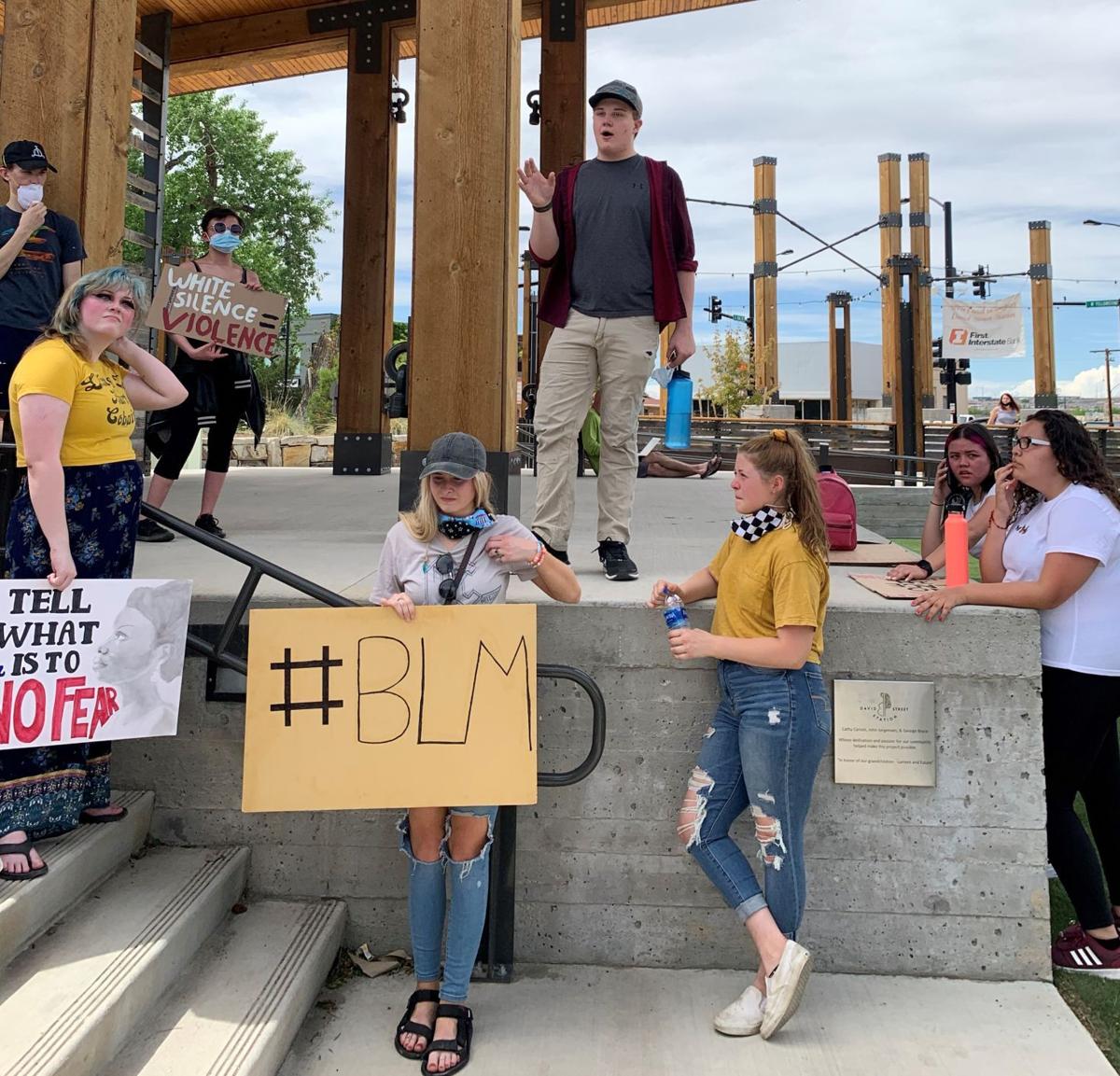 Tanner, a recent Natrona County graduate who asked to only be identified by his first name, speaks to peers after a demonstration Tuesday, June 2, 2020 in downtown Casper.

Around 30 young protesters marched in downtown Casper on Tuesday afternoon in response to the videotaped police killing of George Floyd in Minneapolis.

The group of mostly students marched down David Street to the corner of Midwest Avenue carrying signs in protest against police brutality. They chanted “No justice, no peace” and “Black lives matter” while marching. One sign read “Until ‘good’ cops hold ‘bad’ cops accountable there are no ‘good cops.’” They later marched to David Street Station.

The protest was organized by Dauvi Thompson-Rodriguez, a recent Kelly Walsh graduate.

“I decided to do this because I was sick and tired of being quiet,” Thompson-Rodriguez said.

“I’m not saying every peer is a racist, but, like, it’s visible,” Thompson-Rodriguez said. “And I’m just trying to speak out for every person of color and for the LGBT community, for everybody, for every minority, because I want to be heard.”

At one point, three different trucks revved their engines to dust the protesters in exhaust. One driver went into a parking lot near David Street and Midwest Avenue and began spinning his pickup while giving the middle finger to the protesters. He appeared to be pulled over afterward by an unmarked police car.

However, the majority of interactions with the public were positive.

“Aside from two, maybe three minor incidents, it was amazing,” said Tanner, a recent Natrona County graduate who asked to only be identified by his first name. “We had people honking their support, throwing fists out the window.”

Tanner helps run the organization Casper Youth for Change, the group that says it’s hosting a protest Wednesday in downtown Casper. At the end of Tuesday’s protest, Tanner stressed to the group that Wednesday’s demonstration, while an act of civil disobedience, is intended to be nonviolent.

“There has been a lot of misconception and rumor surrounding what this is, when in fact it is a protest in solidarity with those in Minnesota, with those all around the nation protesting police injustice and accountability,” he said of the protest.

“We are not here to bring violence and hate to our community,” he added.

Multiple demonstrators, including Kelly Walsh High junior Mazzi Vlastos, said they hoped the protest would help convince people that the issue was about more than one party’s politics and that systemic racism was simply unacceptable.

“We’re here for a better future for everyone,” protester Ethan Mesecher said.

Added Kirsten King: “I just think there needs to be attention brought to it.”

We will update this story throughout the day with the latest information on protests both in Casper and throughout Wyoming.
Casper

Dauvi Thompson-Rodriguez, organizer of a Tuesday afternoon demonstration in downtown Casper on June 2, 2020, holds up a sign that reads "Black lives matter."

Tanner, a recent Natrona County graduate who asked to only be identified by his first name, speaks to peers after a demonstration Tuesday, June 2, 2020 in downtown Casper.