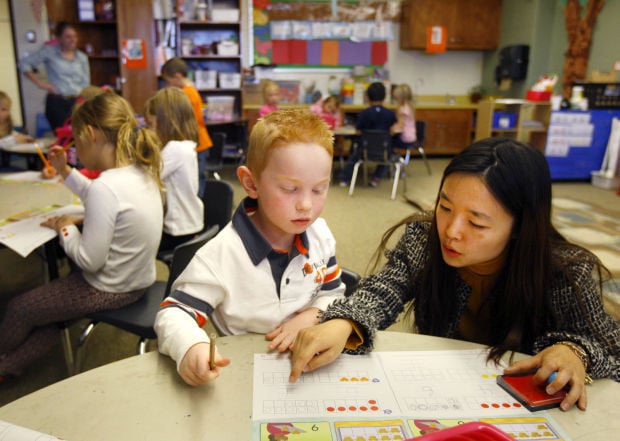 Teacher Anastasia Lite Li works with kindergartener Sterling Mann recently at Paradise Valley School. Li runs the class entirely in Chinese without exception. The Natrona County School District will be evaluating the dual-language immersion program, which is in its infancy at Paradise Valley. 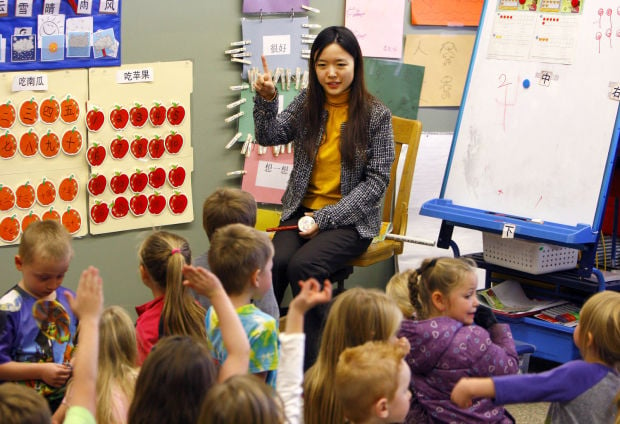 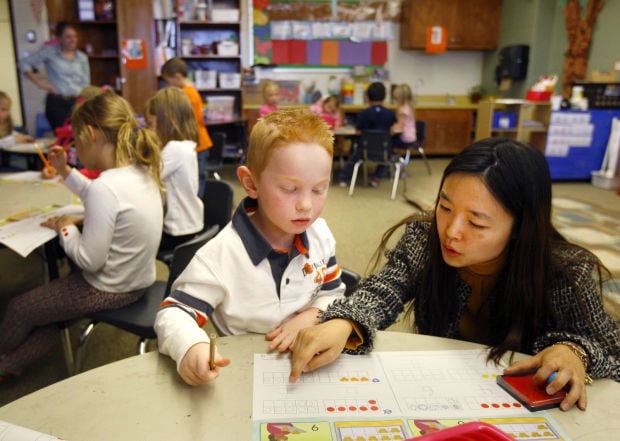 Anastasia Lite Li is a soft-spoken woman until her students enter the Chinese classroom.

That's when the 24-year-old Beijing native with a master's degree in teaching Chinese as a second language comes alive.

Students in this kindergarten class at Paradise Valley Elementary in Casper know the drill: When the bell rings, the English ends. Their names are printed in English on strips of masking tape on a carpet near the back of the room, but little else is said or shown in English in Li's classroom, which is the first of its kind in Wyoming.

It is not a special program for gifted students, nor a language curriculum like what is offered in high schools across the state.

It is immersion learning, where the program's 42 kindergartners spend half the day learning math and science in Mandarin Chinese and half the day reading and writing in English.

On Monday, the Natrona County School District Board of Trustees will hear its first update on the pilot program, which started Aug. 19. The board has not decided yet whether to fund the program for a second year, and while early feedback suggests parents are pleased with the program, little data is available yet to chart student progress.

Li’s morning kindergartners sat cross-legged on a carpet near the back of room on a recent Wednesday. These students cannot read, speak or write Chinese. But to learn their numbers, Li says, they don’t need to.

“A lot of stuff they won’t be able to speak,” Li said. “But they will be able to understand.”

Li modeled actions for the students to imitate: zipping her lips, crossing her legs beneath her to sit quietly. She repeats the Chinese word for the action – or the number, or the object – day after day. Eventually, she said, they get it.

That is because her students’ brains are sponges, she said. Children absorb and repeat sounds more freely than adults do, Li said, and faster students help translate for slower students. Li encourages her students to speak back to her in Chinese when they can. It starts, she said, by making partial sentences with Chinese words the students know -- inserting the word “qianbi” for pencil, or “pao” for run, when acting out vocabulary.

A red-haired boy, for instance, raised his hand during class to get Li’s attention while the class cleaned up from one activity and moved onto the next.

“Miss Li, Mary Kay has a qianbi,” he said, using the Chinese word for pencil.

Starting in the spring, Li will have vocabulary lists for the students to master and specific math problems to perform. For now, she said, she lets the kindergartners explore the language -- what it feels like to write Chinese characters, how the sounds are different than their native words.

Joe Lockwood, 6, stood a few steps in front of his classmates during class, following the motions to a Chinese song while looking up at Li, who stood on a chair to instruct.

Later, Joe’s tongue stuck out from between his lips as he traced a Chinese character on white paper. He said he likes speaking Chinese, because no one knows what he is saying. Joe didn’t remember the Chinese sound for the character he was drawing, but his classmate did.

Joe's mother, Megan, said Chinese and school are starting to click for her son, who is repeating kindergarten at Paradise Valley this year and was adopted from China.

"It absolutely doesn't take away from the English learning at all," Megan Lockwood said of the Chinese language program. "It helps with brain development to study languages, so it helps with English reading too."

The family hopes the program will be around two years from now, so Joe’s 3-year-old brother -- also adopted from China -- can attend.

"I want to see it continue on," Lockwood said. "I want him to experience proficiency in Chinese, and not just have it be a pilot project that comes and goes."

Parent Mark Peterson said he is "tickled" that his daughter Maya can count to 100 in Chinese.

"She's excited to learn," Peterson said. "We hear her talking to her sisters in Chinese walking around the house."

Peterson's biggest concern was attracting a quality Chinese teacher to Casper, he said. Since the school year started, he said, that fear has subsided. He said he plans to keep his daughter in the program, so long as it is available.

A parent group called the Wyoming Dual Language Immersion Steering Committee formed last year to rally interest in a program. Committee Chairwoman Thea True-Wells said the program is not an extra-curricular -- not just one more thing for parents to add to their kid's plate.

"It's not like swimming lessons or horseback riding lessons or tae kwon do," True-Wells said. "It's changing the way they learn."

True-Wells visited the Casper classroom recently, and said she was thrilled with the program's progress.

"To be able to give kids in Casper the opportunity to not only learn a second language, but to learn about a second culture, I think is critical to preparing students for the future," True-Wells said.

Among the flowcharts and calendars dotting Paradise Valley Principal Aaron Wilson's bulletin board is a black and white image of a single Chinese character.

It means "tiger," and it is Paradise Valley's mascot.

Wilson has supported the program when naysayers ask whether the school is getting ahead of itself by teaching kindergartners in Chinese. Many kindergartners haven't yet mastered the English alphabet, critics say. Why introduce Chinese characters?

But research from immersion programs in Utah, where some 20,000 students statewide participate in dual language learning, suggests that most students who learn in a second language do at least as well -- if not better -- on standardized tests than students who are not in a dual language program, said Casper-based language consultant Ann Tollefson.

"We have a body of research that says they are more analytical thinkers, that they are more creative, that they deal better with ambiguous situations," Tollefson said. "I also think definitely they're more competitive."

Paradise Valley kindergarten teacher Chris Tinker-Madsen said she doubted whether her normal day-long curriculum could be compressed into half a day, which is all she would get with her students as a partner teacher for the school's dual language program.

But on a recent Wednesday, Tinker-Madsen said she was pleased that these students have picked up as much as any class before them, in less time.

"My kids are right where they need to be for this time of year," she said.

Even in her class, the kids talk to each other in occasional Chinese. They sing the songs they learn with Li. The whole kindergarten class recently participated in a Chinese Moon Festival celebration, and in music class they listen to music from various Chinese dynasties.

"This is part of the Paradise Valley Culture. It's not just a dual language immersion culture," Tinker-Madsen said. "They know they are a part of something special here in Casper."

Wilson, the school's principal, talks enthusiastically about parental support and how the school is embracing the second culture.

Besides coordinating schedules, the program's biggest hurdle has been sufficiently communicating with parents about the program, he said. He hopes the district's vision of a K-12 dual language program can grow year by year until completion.

"I don’t know how many of those 42 children are going to grow up and have a job that requires them to speak Chinese," Wilson said. "But I can tell you from kindergarten to 12th grade, the opportunities that this is going to allow them is great."

Where else in Wyoming?

A Chinese dual-language immersion program in Casper is the first of its kind in Wyoming, but the movement is gaining traction in other areas of the state.

Parents and teachers in Gillette and Cody reported interest in pursuing a dual-language immersion program in their school districts during interviews with the Star-Tribune, and said contingencies in Evanston, Sheridan and Cheyenne were also interested in such a program.

Brandee Mau, foreign language curriculum facilitator for Campbell County School District 1 and a German teacher at Campbell County High School in Gillette, said her school district will send a team of school officials and community members to observe the dual-language immersion programs in Utah in the coming months.

Parent and school board member Brad Payne, of Cody, said his community is in the infancy stages of considering a dual-language immersion program. Several parents there are interested in seeing the program at work in Casper, he said.

A Spanish immersion program has educated native English-speaking and native Spanish-speaking elementary students in Jackson since 2009.

"As it turns out, dual language immersion programs are the most effective for both of those [groups]," Ransom said.

The dual language immersion program grew with its students each year, Ransom said, and the oldest group of dual language students is now in fifth grade.

Teton County School District 1 plans to expand the program to a local middle school and high school as the students advance, Ransom said.

WH turns focus to getting Under 30 vaccinated

WH turns focus to getting Under 30 vaccinated

Natrona County School District Board to vote on dual-language programs

As Natrona County school officials craft a policy to approve future dual-language immersion programs, a group of local parents is revamping it…

A dual language program will begin teaching students in Spanish and English at Park Elementary School in Casper this fall.

Teacher Anastasia Lite Li works with kindergartener Sterling Mann recently at Paradise Valley School. Li runs the class entirely in Chinese without exception. The Natrona County School District will be evaluating the dual-language immersion program, which is in its infancy at Paradise Valley.