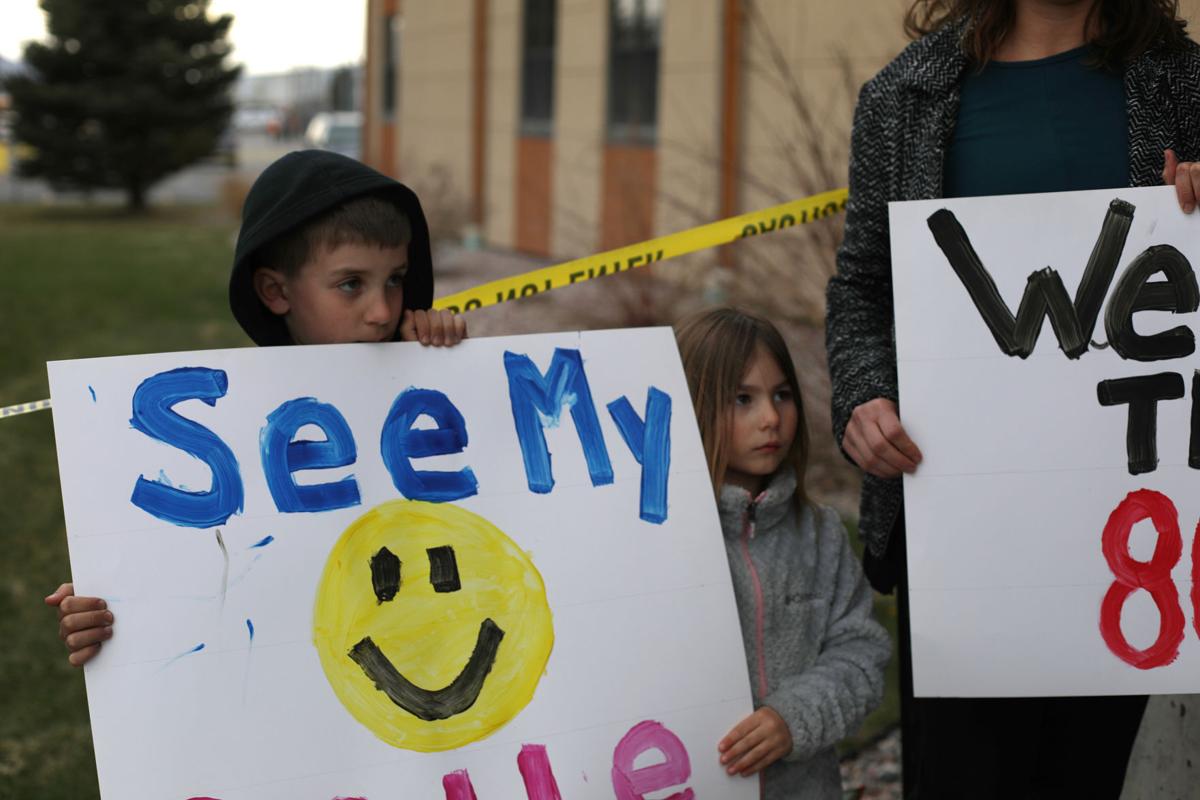 Matthew Lloyd and his sister Evelyn Lloyd hold a sign outside the Natrona County School District board of trustees meeting in Casper on April 26. The district's request to receive an exemption from the state's face mask mandate has been approved. 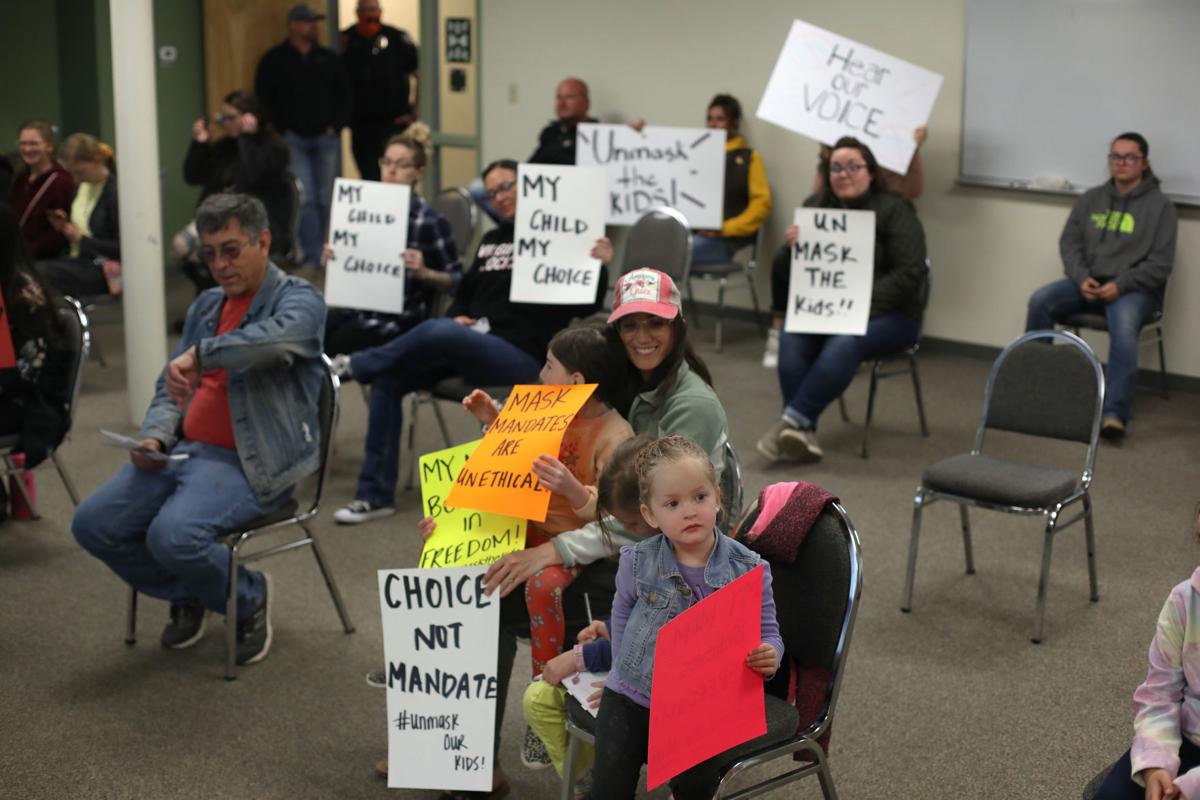 The public gathers inside Natrona County School District offices to protest the mask mandate and speak during public comments April 26 in Casper.

Face masks will no longer be required in Natrona County School District buildings beginning Friday, the district announced Thursday after gaining approval from the state.

The last day of school in the district is June 11.

The local district is the state’s largest to get permission from health officials to eliminate the mask requirement. The mandate requiring certain precautions, including mask-wearing, at educational facilities in Wyoming is one of two public health orders that remain as COVID-19 infections have dropped here.

State Health Officer Dr. Alexia Harrist has been granting exceptions to that rule for districts in low-transmission counties.

Including Natrona County, 28 districts have been approved to make masks optional. All but one of the previously approved districts serve fewer than 2,000 students. The outlier, Sheridan County School District 2, serves about 3,500 students. Natrona County has just under 13,000.

Two smaller districts in Laramie and Uinta counties have had requests denied because of transmission levels in their communities.

The decision to do away with masks in Natrona County schools has been contentious. District trustees voted 5-4 in a special meeting April 19 not to request an exception from the state after reviewing a parent survey. More than 80% of parents wanted masks to be optional, but about 200 families said if masks were mandated, they might withdraw their students from school.

The day after that vote, district Superintendent Mike Jennings emailed trustee leaders inviting them to a private meeting later in the week to discuss face masks, according to emails obtained by the Star-Tribune through the state’s public records law. That Saturday, the district announced it would seek the mask exception after all.

District officials declined to explain the rationale for the change but said the action did not require a board vote. It’s unclear why trustees voted on the issue at the April 19 meeting if the vote was unnecessary.

Despite the exception, masks will still be required on school buses because of a federal requirement, and schools will still require masks at nursing stations. Otherwise, face coverings will be optional.

“We understand some families may have questions or concerns regarding the safety and health of their child(ren). Please contact your child’s school, as soon as possible, if you have concerns regarding the approval of the exception request. Your child’s individual school will work directly with school families to identify needed accommodations and supports,” the announcement reads.

District spokesperson Tanya Southerland said those accommodations could take a few forms, depending on what parents and students are comfortable with.

“It’s really not a one-size-fits-all with that,” she said.

For some, continuing to wear masks and adding plastic dividers between desks may be enough. Others may choose to participate in a remote learning program intended to be used for quarantining students, Southerland said. Other accommodations may also be used based on individual school leaders’ discretion.

She added schools will continue sanitizing surfaces and encouraging hand washing and good hygiene among students.

The county or state health departments can revoke the district’s exception if transmission increases in the community, or if an outbreak occurs within a school, Southerland said.

COVID-19 cases in Wyoming have plummeted since the surge this fall. New infections have plateaued, and vaccines have been available to all adult Wyoming residents since late March.

Residents 12 years and older were approved to receive the Pfizer-BioNTech COVID-19 vaccine Monday, and several county health departments including Natrona County’s announced they would begin offering those shots Thursday.

The emails shed light on a decision-making process that Natrona County School District officials have refused to answer questions about.

District officials have not explained publicly how the decision was made or why the board of trustees' approval was initially sought if it is not required, as administrators now say.

One of those orders requires mask wearing and physical distancing at educational facilities. The other imposes limits on indoor gatherings greater than 500 people.

Matthew Lloyd and his sister Evelyn Lloyd hold a sign outside the Natrona County School District board of trustees meeting in Casper on April 26. The district's request to receive an exemption from the state's face mask mandate has been approved.

The public gathers inside Natrona County School District offices to protest the mask mandate and speak during public comments April 26 in Casper.