In uncertain times, a Rock of comfort
View Comments
Share this
{{featured_button_text}}
1 of 2 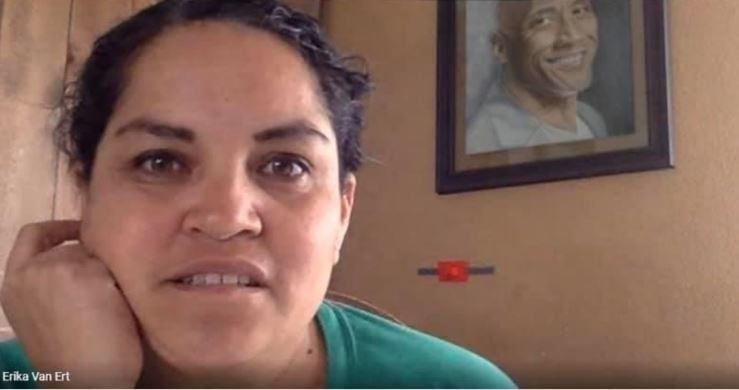 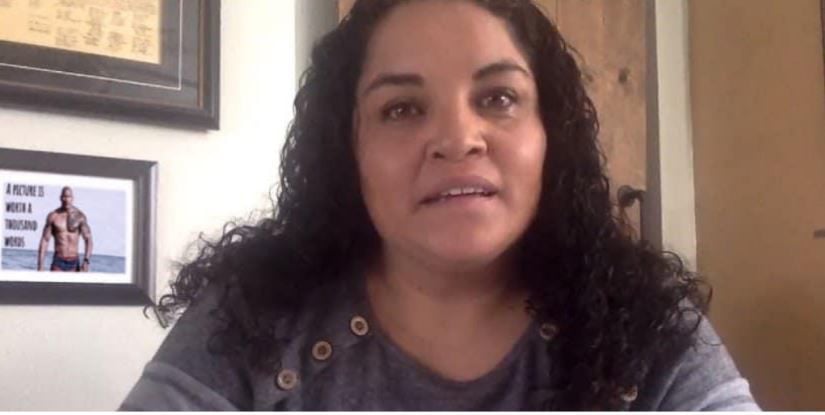 In these uncertain times, it’s important to find ways to stay positive and to take heart in the things we enjoy.

Erika Van Ert has Dwayne Johnson. The Rock. Possessor of the People’s Elbow. Chef of whatever The Rock is cooking. Movie star. Inspiration for bald men everywhere.

“I used to watch wrestling, and my mom did not like it all,” the Kelly Walsh teacher said. “The guy I was dating liked to watch the wrestling. At first I thought it was stupid. Then I discovered how handsome (The Rock) was, and I was like, ‘Oh, I’m OK with this.’”

Van Ert’s affinity for the former University of Miami football player has bled over into her sophomore English class; she likes to slip The Rock into her grammar examples. Imagine her wielding one of those old-timey wooden pointers and carefully walking through Rock-themed sentences about semicolons and effect vs. affect. “Here’s something to know about The Rock: He is handsome.” “He is someone whom I would like to hug.” “The Rock has affected my life in more ways than can be counted.”

This has not gone unnoticed.

“Basically a few times in English during class, our teacher would talk about how she had a crush on The Rock or something like that,” sophomore Jiayang Liu said. “She always talked about it, his bald head and stuff.”

Liu and Van Ert said her classroom walls are covered in internet jokes (OK, they’re memes, but this is a newspaper). Just before school was canceled amid the coronavirus pandemic last month, Liu swapped out the images with Rock-themed replacements. “The look on my face when students turn their work in on time” became “The look on my face when The Rock takes his shirt off.”

Van Ert said the swap was funny, but because the physical classroom was closed, she thought the joke was done.

Alas, she did not smell what Photoshop was cooking.

The classes moved online. Van Ert recorded a video for her students, checking in with them and saying she missed them. Liu took a still image from the video, in which a picture frame is perfectly situated over Van Ert’s right shoulder. With some careful computer work, Liu cropped out the image that was there before (a copy of the Gettysburg Address) and replaced it with The Rock, striding shirtless toward the camera.

“A picture is worth a thousand words” is printed in black next to him. Indeed.

The switcheroo is so good it’s easy to miss. Liu posted the new image on a class thread and quipped that he liked Van Ert’s poster.

“I thought, ‘Oh, maybe he loves history,’” she said, unaware that President Abraham Lincoln’s seminal speech had been replaced by the People’s Elbow (and the People’s Rest of the Body). “Then I clicked on the picture, and I just cracked up.”

Liu did it again after Van Ert posted another video (this time a session with students). Yet again, a picture frame is positioned perfectly behind her. From the top rope comes Liu, editing in a smiling Dwayne, an image that looks like it’s been pulled from a yearbook in which The Rock was voted Most Likely to Somehow Be The Highest Paid Actor in Hollywood.

Have Liu’s hi-jinks come to an end? Will there be more of the People’s Champion?

Authorities say the patient had "very limited contact" with the public on two days last week.

Three other staff members at the Casper facility were put on 14-day quarantine.

From free internet for homes without it to buses fitted with Wi-Fi, officials from Converse County School District No. 2 are rolling out sever…

Can you punish someone for attending a party during a pandemic? It depends.

Police departments are still trying to determine how to enforce public health orders.

Gordon developing plan to transition Wyoming out of coronavirus orders; existing orders to remain in place

The governor's plan will not be tied to specific dates. Instead, it will be data driven, the governor said.

"There is great likelihood that we could see restrictions or orders of some sort extending well beyond that April 30 date," a county spokeswoman said.

Revenues at Campbell County Health have dropped by more than 50 percent and "decreased our cash reserves to a level that is very concerning," the hospital's CEO said in a statement Friday.

Hospital CEO Mike Phillips said the CDC staffers "reviewed and approved" all protocols put in place to contain the spread of COVID-19.

The two units still overseas were set to return to the United States in the coming months. But their return will likely be delayed by 60 days because travel restrictions related to the virus have blocked units traveling to replace them.

Even more Wyomingites say employment has been affected by coronavirus

More than 60 percent of people who responded to a UW survey say their hours or pay have been cut because of the pandemic.

"If anyone thinks that simply easing restrictions currently in place will lead to an immediate return to normal, they need to think again," Gordon said.

While the number of cases haven't spiked of late, Natrona County's health officer said the data is "falsely low."

The mayor said that he'd seen a video of the party and that the attendees were "flat out thumbing their nose" at public health concerns.

Few details were released about the man, other than that he was older.

Of the district's students, 97 percent have re-engaged in coursework despite the school closures.

"The economic benefits of lives saved outweigh the value of the projected losses of GDP by about $5.2 trillion," the authors wrote in article that will be published by a Cambridge University journal.

WMC is advising all patients who don't have emergent problems to make use of the telehealth services.

“The CDC indicated an interest in directing some of their staff toward protecting areas with relatively low levels of COVID-19 infections,” state health officer Dr. Alexia Harrist said.

The latest: Coronavirus in Wyoming — April 14

The Star-Tribune will update this page throughout the day with the latest news regarding coronavirus in Wyoming.
Wyoming News

The family wants everyone to know this story. They want people, especially the sick, to understand that even now, with a disease like this, there is still hope.

The United States' most prominent infectious disease expert said Gov. Mark Gordon was "doing an extraordinary job" of handling the spread of the coronavirus in Wyoming.

Nearly half of Natrona County’s 33 confirmed coronavirus patients are linked to the Wyoming Behavioral Institute, while an equal number of pat…

A Johnson County man who was infected with the novel coronavirus has died, the first such death in Wyoming, the Department of Health confirmed Monday.

Wyoming Medical Center has cut the hours of its nonclinical staff and reduced pay for its leaders as the hospital focuses on the coronavirus and stops its most lucrative procedures.

Amid pandemic, Wyoming mom struggles between caring for ill husband and being present for children

The virus has separated a Green River family while the father recovers from brain surgery.

Traffic, admissions to WMC's ER drop significantly in the age of coronavirus

The number of people showing up to Wyoming Medical Center's emergency room has dropped by half since the coronavirus began its spread across Wyoming.

Wyoming hospitals get $2 million, with the feds ready to release tens of billions more to facilities nationwide

Wyoming received more than $2 million from the federal government to be distributed to some small hospitals to help combat the coronavirus pandemic.

More people can now be tested including those who fall outside the six priority groups previously identified by health officials.

Physical school buildings have been closed for a month now as part of Wyoming's efforts to slow the spread of the coronavirus, though districts have been educating students largely through the internet in recent weeks.

UW to get $6.6 million in student aid from federal government as school prepares to cut budget

The university is also examining its options for the fall, which might include moving large lectures online and boarding one student to a dorm room.

The county will begin testing anyone with symptoms of the respiratory illness, rather than certain high-risk groups that were prioritized previously.

A Wyoming Medical Society survey found 70 percent of primary care providers have experienced an increase in cancellations, and 62 percent said "they are currently experiencing or anticipating cash flow issues."

Natrona County schools to remain closed through duration of semester, board decides

The district, like all others across Wyoming, has been closed for more than a month in an effort to slow the spread of the novel coronavirus.

"I get tired of having these rulings come down on high with no explanation," board member Kevin Christopherson said Monday night.

While gyms and beauty parlors can reopen Friday, other restrictions are being extended through May 15.

The county previously hadn't issued any exemptions to the state's orders.

Nine airmen from the Wyoming Air National Guard have been deployed to California as part of an effort to to address the coronavirus pandemic within the military.

The two counties are on opposite ends of the coronavirus pandemic in Wyoming. Park has just one case, despite its early presence in the county, while Teton has the most cases per capita in the state.

Cheyenne Bishop Steven Biegler said that "tentative plans" call for Mass, baptisms and marriages to return on May 15, albeit in a limited capacity.

New data shows Natrona County is testing at nearly the same rate. But the number of cases hasn't increased here like it has in other Wyoming counties.

Officials both in Wyoming and across the nation have stressed the need for widespread testing to truly get a handle on the pandemic.