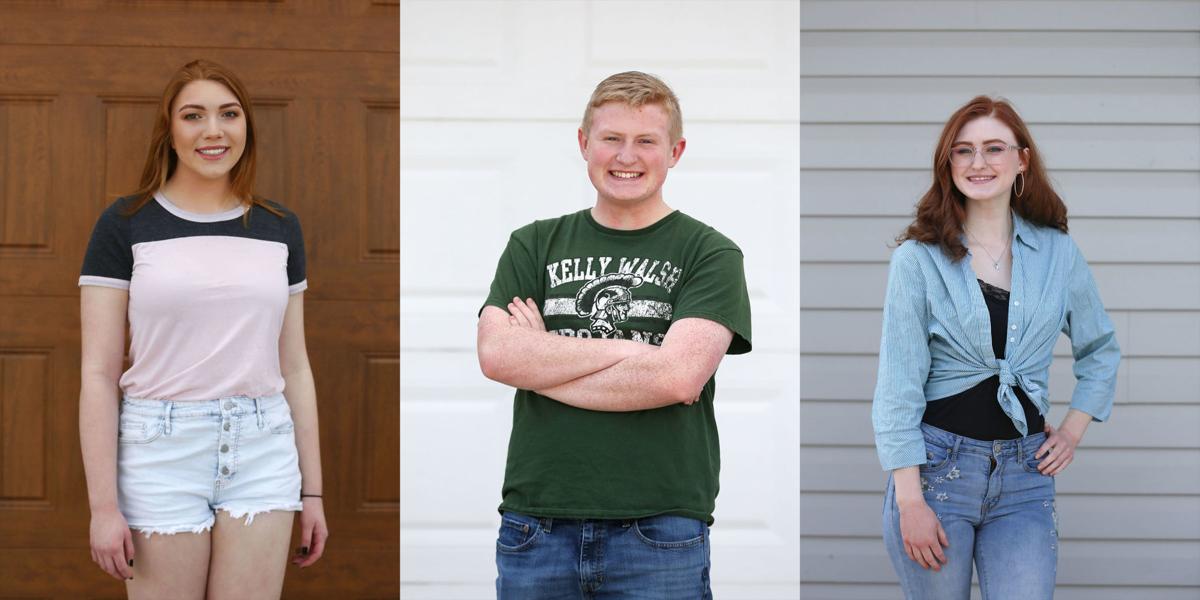 Kelly Walsh students (from left) Leah Rose, Andrew Brown, and Celia Nelson pose for portraits outside their respective homes in Casper on Monday. All three are participating in a virtual performance of Rodstock, a Kelly Walsh music festival typically held at the school. 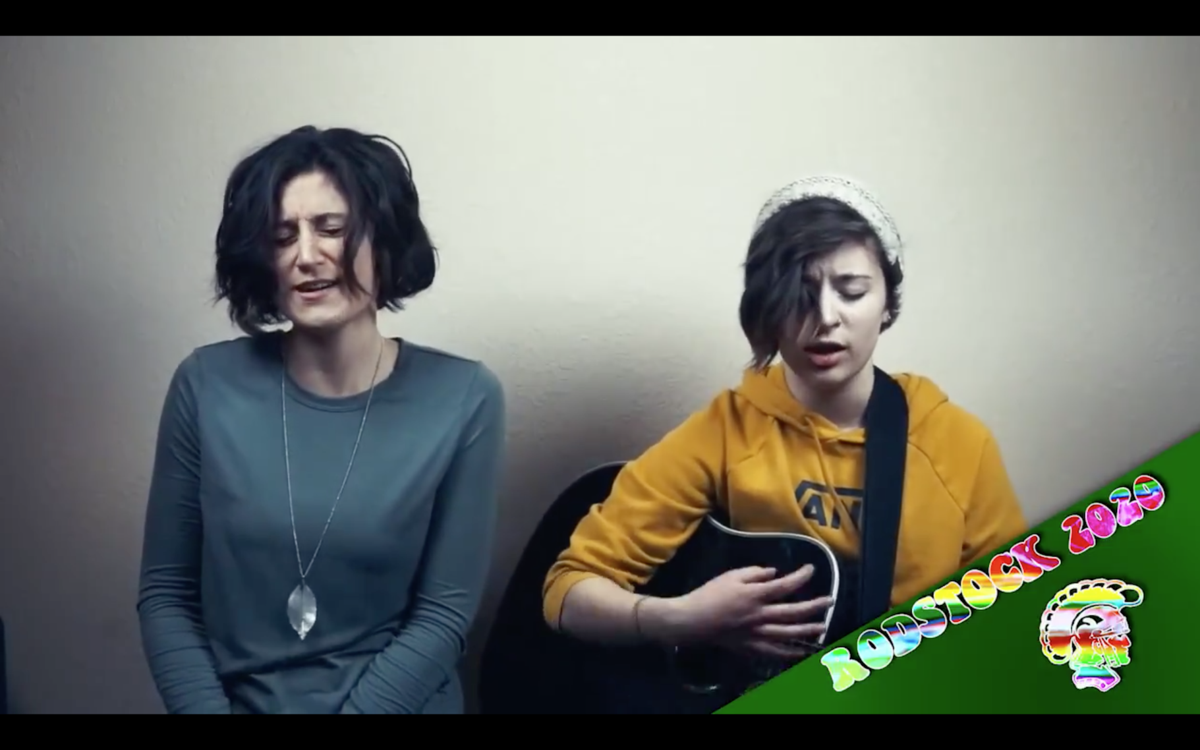 This screenshot of a video on the Kelly Walsh High School Twitter account shows Dakota Gamble and her mother, Laura, performing a song for Rodstock.

The song begins this way: “Days are good/And that’s the way it should be.”

Lean Rose sings it out, strums it out, from the confines of her home. There’s a reason she’s at home instead of continuing on her sophomore year inside Kelly Walsh: These days, the days are not so good. Nearly 100 Wyomingites have been confirmed to have the novel coronavirus, the majority in the past week. Schools, incubators for the contagious virus, have been shuttered for 15 days. Businesses are closed too. Social interaction is all but forbidden.

Still, the second lyric is true. The days should be good. Rose and hundreds of her classmates should be crowding Kelly’s gym. They should be piling up pillows, lounging in pajamas, relaxing and singing and break-dancing to a schoolwide concert held every year. They call it Rodstock.

But the gym is empty, and Kelly Walsh is empty. For better or worse, the internet isn’t empty. It’s full of possibilities, and for a school physically divided for the foreseeable future, YouTube and Twitter and Facebook may be the best options to keep the concert going. If there were ever a good use for the internet, leveraging it to continue Rodstock may be it.

Fleming had begun gathering audition tapes roughly two weeks ago, around the same time Gov. Mark Gordon recommended schools be closed and just about every district complied. Fleming didn’t want to give it up, so he began to message students on social media to see if they would play their music in videos that could be posted periodically throughout this week. The goal is to show the community — and the students — that Kelly Walsh is more than a building.

Rose picked “Bright” by Echosmith. It’s a happy song, a love song. That’s why she picked it. The world could use that right about now.

“It was definitely important for me to do something that was happy and would maybe make somebody smile,” she said.

Celia Nelson, a junior at KW, has performed at Rodstock every year she’s been at the east Casper school. She picked “Valerie,” made famous by the late, great Amy Winehouse. It’s a comfortable song for her. It’s warm and inviting, but maybe that’s more Amy than the lyrics. “Varlerie” is about a few things. But in a bit of an ironic twist to a socially isolated society, its chorus asks Valerie to come on over.

“Well sometimes I go out by myself/And look out across the water.”

Like Rose, Nelson plays the guitar during her video. With school out for the past two weeks, she’s been playing video games — Red Dead Redemption, a Western epic. In her video, she’s sitting in front of her bed, her clear-framed glasses reflecting her computer screen, a tie-dye grip clipped to the top of her acoustic guitar.

When Fleming asked her to participate in this digital Rodstock, she was enthusiastic.

“Hell yeah, I like Rodstock,” she said. “I was really glad that it’s still happening because Rodstock is one of my favorite things to do and I’m really glad we could find a way to get around this whole pandemic stuff.”

Senior Andrew Brown, also a veteran Rodstock-er, had similar motivations for participating. He submitted a video of himself playing the piano and singing Ben Platt’s “In Case You Don’t Live Forward.” It, too, is a love song. It’s nostalgic, the sort of thing you imagine yourself saying to a person the last time you see them.

“The lyrics mean a lot,” Brown said. “And especially during this time where it’s kinda hard to maintain a sense of hope when everything’s ripped away.”

Fleming said he’d be dropping the students’ videos every few hours through Friday. Each one would get a few hours in the spotlight, alone to soak up some attention and let their voices speak.

The days aren’t good. but they should be. They always should be, and what if we could make them so?

"Of all the changes the College has been forced to make because of COVID-19, this message is by far the hardest to send out," college president Darren Divine told students.

A district spokeswoman said that students will have required classwork starting next week. "This may be in a variety of formats to support all students," she said.

The masks are being manufactured from plastic within the university's maker space lab.

More than half of people in Wyoming say they or their immediate family have had their hours or pay cut.

The number of coronavirus cases associated with the facility has more than doubled.

Health Officer Dr. Mark Dowell says he'd like to avoid issuing a local shelter-in-place order but may have to if Gov. Mark Gordon doesn't.

University of Wyoming says its spring commencement ceremonies will be virtual

The University of Wyoming will move its spring commencement and graduation ceremonies to virtual formats, its latest effort to slow the spread…

The guidance mirrors the recommendation from the CDC to wear face masks or coverings when in public.

Medical board makes it easier for retired, nonpracticing doctors to re-enter field

The move is part of an effort to boost the state's health care workforce amid the coronavirus pandemic.

Over the weekend, Fremont County health officials said they would test all remaining Showboat Retirement Center staff and residents.

"Just from personal experience, it’s been eyeopening, how sick these patients can really get," a Lander ER doc said.

Laramie County, the home to Wyoming’s largest coronavirus outbreak, is experiencing widespread community transmission of the disease that can’…

Kelly Walsh students (from left) Leah Rose, Andrew Brown, and Celia Nelson pose for portraits outside their respective homes in Casper on Monday. All three are participating in a virtual performance of Rodstock, a Kelly Walsh music festival typically held at the school.

This screenshot of a video on the Kelly Walsh High School Twitter account shows Dakota Gamble and her mother, Laura, performing a song for Rodstock.