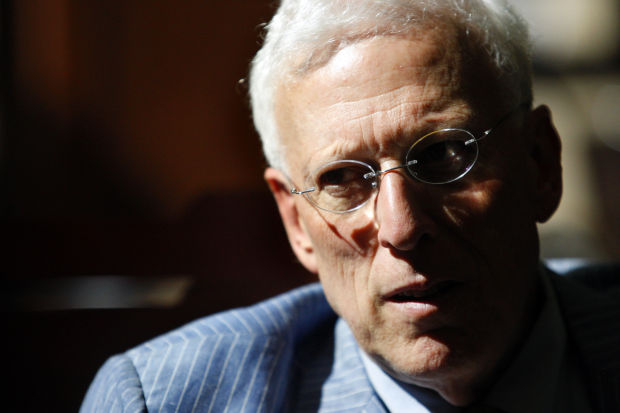 Former University of Wyoming President Bob Sternberg speaks during an interview on July 24 in Laramie. Sternberg resigned his position Nov. 14 after less than five months at the head of the university. 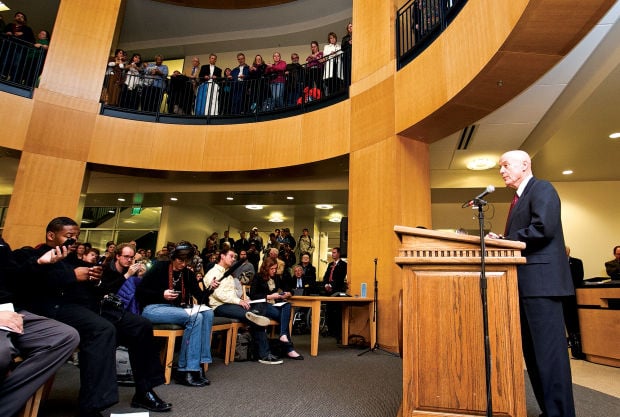 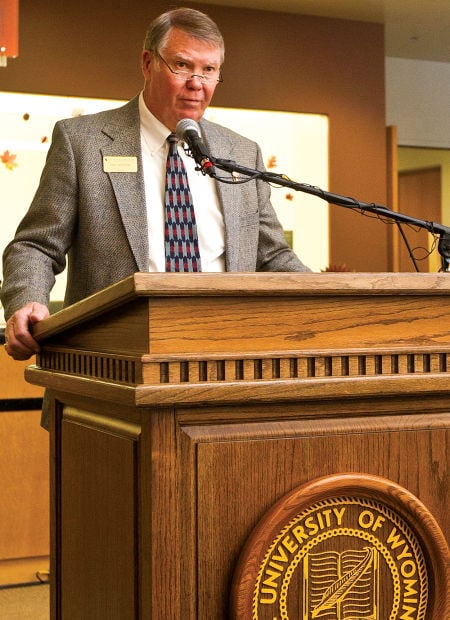 University of Wyoming Board of Trustees president David Bostrom announces the resignation of President Bob Sternberg on Thursday, Nov. 14, 2013, in the basement of the Coe Library in Laramie. Following the announcement Dick McGinity was named interim president. (Jeremy Martin, Laramie Boomerang)

Bob Sternberg stepped down from his post as the University of Wyoming president Thursday, only 137 days after taking the job July 1.

He told the Star-Tribune that after having a conversation with board of trustees President David Bostrom on Wednesday, he felt trustee support for his actions may have been waning after the resignations of three deans and five administrators.

“[I]t became obvious that things were not working out as I, or probably anyone else, had hoped for,” Sternberg wrote in an email to the Star-Tribune on Thursday. “I left [the conversation with Bostrom] feeling I most likely did not have full support from the board, and when you are president, you need their support.”

Sternberg said he did not want to create a situation where board members were forced to take a vote on his leadership.

“If one does not feel the complete confidence of the board, then the honorable thing to do is to resign, which I did,” he said.

University officials announced Sternberg’s resignation in a 5:30 p.m. press conference Thursday after an executive session of the board lasted for more than nine hours. Sternberg tendered his resignation late Wednesday, Bostrom said.

A crowd of students, faculty and media lined the rails in an open area of UW’s Coe Library to hear the announcement from a podium near the library’s help desk Thursday.

Three deans and five administrators have resigned their administrative posts since Sternberg arrived. Two of them were asked to resign because of differences in vision with university leadership; the others left for a variety of reasons.

The tide of turnover was capped most recently by an outspoken resignation from former College of Law Dean Steve Easton, who objected to Sternberg’s lack of consultation with the law school in his decision to assemble a task force to study the school’s performance in natural resource-related areas of law.

Easton said Thursday it was a sad, but necessary, day for UW.

“We had great hopes,” Easton said of Sternberg’s arrival on campus.

Sternberg replaced former UW President Tom Buchanan as the university’s 24th president with an annual base salary of $425,000. He was most recently provost at Oklahoma State University, and has held administrative and faculty positions at Yale University and Tufts University. He will cease presidential duties immediately, he told the Star-Tribune, though he will be on the books until Dec. 31. Under the terms of his departure, he will be paid $325,000 for the following year.

UW’s interim vice president for academic affairs, Dick McGinity, will begin performing the duties of the president immediately, according to a university release.

“The people that are in place now are a terrific team,” McGinity said Thursday. McGinity became the university’s interim vice president for academic affairs in September following former Provost Myron Allen’s resignation. He said Thursday the presidential task force to evaluate the College of Law was “not going to proceed at a rapid rate.”

Law students and former Dean Easton had suggested the task force delay its review until results of an ongoing American Bar Association accreditation are available.

Bostrom, the board of trustees president, said in a university release Thursday that the board was grateful for Sternberg’s service. The board’s No. 1 budget priority — raises for a faculty that has not seen a salary increase in four years — has not changed, Bostrom said.

“The board fully accepts and endorses the personnel changes and changes in direction at the university that have taken place in the last several months,” he said.

Gov. Matt Mead said in a statement he supported the trustees.

“I support the trustees and have confidence in their abilities to make decisions in the best interest of our university,” Mead said. “Given President Sternberg’s decision I believe the board of trustees has developed a good plan to move forward.”

“This happened last night,” Bostrom said Thursday. “We have not had the opportunity to even have those discussions.”

Judith Ramaley, a senior scholar with the American Association of Colleges and Universities, said concern about the level of support from the university’s governing board plays a role in all early resignations.

But such sudden departures are not common, she said.

“It is rare for a President to step down prior to the end of his or her first year in office,” Ramaley wrote in an email to the Star-Tribune. “[B]ut it certainly has happened occasionally.”

Sternberg told the Star-Tribune editorial board in an interview Monday that he was doing exactly what the board of trustees hired him to do.

“I deeply regret things did not work out,” Sternberg said in an email to the Star-Tribune.

McGinity takes reins of University of Wyoming amid scrutiny of predecessor

Despite a new face at the table during budget deliberations, the University of Wyoming's budget request remains unchanged following the recent…

Sternberg resigns, but University of Wyoming still renovating his rental for $255K

More than $250,000 in renovations underway at a University of Wyoming-owned home rented to former university President Bob Sternberg are still…

2014 Look Ahead: No rush to hire new University of Wyoming president

The University of Wyoming named Al Rodi, an atmospheric science professor at UW, interim dean of the College of Engineering and Applied Scienc…

Turnover at the University of Wyoming: Too much, too fast?

A tide of turnover has hit the University of Wyoming during the past five months, capped most recently by an outspoken resignation by the dean…

The dean of the University of Wyoming's College of Law resigned his post Thursday, citing communication difficulties with university leadershi…

In November 2013, the University of Wyoming’s board of trustees met privately for nine hours to address the problem with the school’s new president.

Former University of Wyoming President Bob Sternberg speaks during an interview on July 24 in Laramie. Sternberg resigned his position Nov. 14 after less than five months at the head of the university.

University of Wyoming Board of Trustees president David Bostrom announces the resignation of President Bob Sternberg on Thursday, Nov. 14, 2013, in the basement of the Coe Library in Laramie. Following the announcement Dick McGinity was named interim president. (Jeremy Martin, Laramie Boomerang)