Childhood chatter rang out over the blacktop, masked students queued up for school buses, and street signs blinked a warning to slow down outside of Park Elementary.

The Casper school and all the rest in Wyoming shuttered so fast in mid-March that it felt like a giant switch had been flipped. In that moment, education was thrown into disarray to an unprecedented degree.

But on Wednesday, nearly six months and a lifetime ago, schools reopened again, a masked, socially distanced affair that still teemed with the excitement that the first day of school inevitably brings. How long schools stay open is the open question. Most officials accept that it’s a matter of when, not if, the coronavirus makes its way into Casper schools. But that was a worry for another day.

At Park Elementary, parents sent their kids through the gate into the playground, where they hung around or ran off to play, masks on. Parents weren’t allowed into the playground or the building itself — not without an appointment, not this year. One kid in a Captain America outfit — complete with inflated muscles and a shield — stood by his parents. One mom, stroking her daughter’s hair, asked if she was ready.

James and Jessica Christian, who were both wearing masks, watched from behind the fence as their kindergartner, Tobias, stepped into the next phase of childhood. Before the kinders were shepherded into the school, Jessica knelt and pressed her mask against Tobias’. They were excited for him, if a little nervous. Teachers handed out heart stickers for the kinders and their parents to wear on their hands, so they could look down and think of each other throughout this bizarre first day.

Sara Vrbas and her now-kindergartner son biked to Park, with her two younger kids in a carrier trailing behind her. She said sending him off was “bittersweet.” Since this is his first day of public school, he doesn’t know any different — masks are just his normal, as much a piece of his school attire as his backpack.

“He thinks of it as a ninja mask,” she said from the sidewalk outside of Park. “Whether he keeps it on all day remains to be seen.”

She felt optimistic about the school year. If it closed, that’d be OK — the district has had time to plan for that.

Nicole Roby was also sending off a kindergartner, as well as her 7-year-old. From behind the fence, she called out “love you, baby!” She said the spring — and the quick transition from in-person to hope-and-prayer online learning — was “a nightmare, mostly.” Her kids felt alone, isolated.

Her 7-year-old was excited for the first day, she said. She’d never been that excited for school before.

“Kids are pretty adaptable,” Roby said of the mask requirement. But it was still hard, saying goodbye to her kindergartner through a fence. Normally, she’d walk into the school, too, and see the classroom, meet the teacher. She’s a bit concerned about the pandemic but is hoping for the best. She just doesn’t want school to go back online.

“Hopefully it all works out,” she said. “You can’t keep kids in a bubble.”

Roby watched until the kindergartners had been led inside before turning away from the fence. A church nearby — there are three — rang out 9 o’clock.

Six hours later and a few blocks over, high schoolers poured out of Natrona County into the parking lot, where parents were parked on the periphery and cars were painted for seniors. “Senior made,” “senior world,” “go crazy, go stupid.” The previous class of seniors lost the last three months of their high school lives and accepted their diplomas from a table outside of the Casper Events Center.

High schoolers are high schoolers, so the first day of school was not as universally joyful as it was for elementary kids and their parents.

Senior Brady Dutcher was in the parking lot just after 3 p.m., carrying around a jug of water and wearing a mask. His first day was “really good,” he said.

“I really enjoyed it,” he said. He got to see his friends again, and masking wasn’t all that bad. The rule was pretty well-followed, with some gentle reminders, he said.

Luke Short, another senior, was less enthusiastic. The day was “long, long, and tiring,” he said. It was good to see people he hadn’t seen, but school felt different now.

“Sitting down with those barriers, it was lame,” he said, referring to the partitions set up at desks and tables to separate students. “You couldn’t really talk to anyone.”

Alexis Stewart and Rebecca Raphial walked out of the school and into the parking lot together. Alexis wasn’t thrilled to be back; she’s in the minority of students — and parents — who prefer online learning. School with all of the safety measures was “extremely weird.”

“It was a lot more tense,” she said. Especially the administrators, who were constantly on the lookout for masks. “They looked straight at your face.”

Raphial was more excited for in-person learning. She works in retail, so the masks weren’t a bother — she’d grown used to them. It was nice to see everyone back. As they talked, another student walked up behind them and heard Raphial shrug off the mask burden.

“What are you talking about?” he said. “It sucked.”

Masks or no masks, the first day is the first day. At Park, parents filled street sides and sidewalks around the school. As they spilled out of the school, Natrona County students called out to each other, climbed into their cars and navigated the gauntlet that is that parking lot. At Dean Morgan, students lined up outside for PE. Kids thronged Manor Heights’ front steps. Signs kept blinking their warnings.

As many Natrona County students return to in-person classrooms for the first time since March, the district is seeing an influx of students whose home lives have been affected by the financial fallout of COVID-19.

There have been roughly 30 students and staff members who've tested positive since schools reopened. But those cases have been scattered across Wyoming and haven't led to any school-centered clusters or outbreaks.

The concern about mask wearing comes amid a surge in cases in Natrona County. 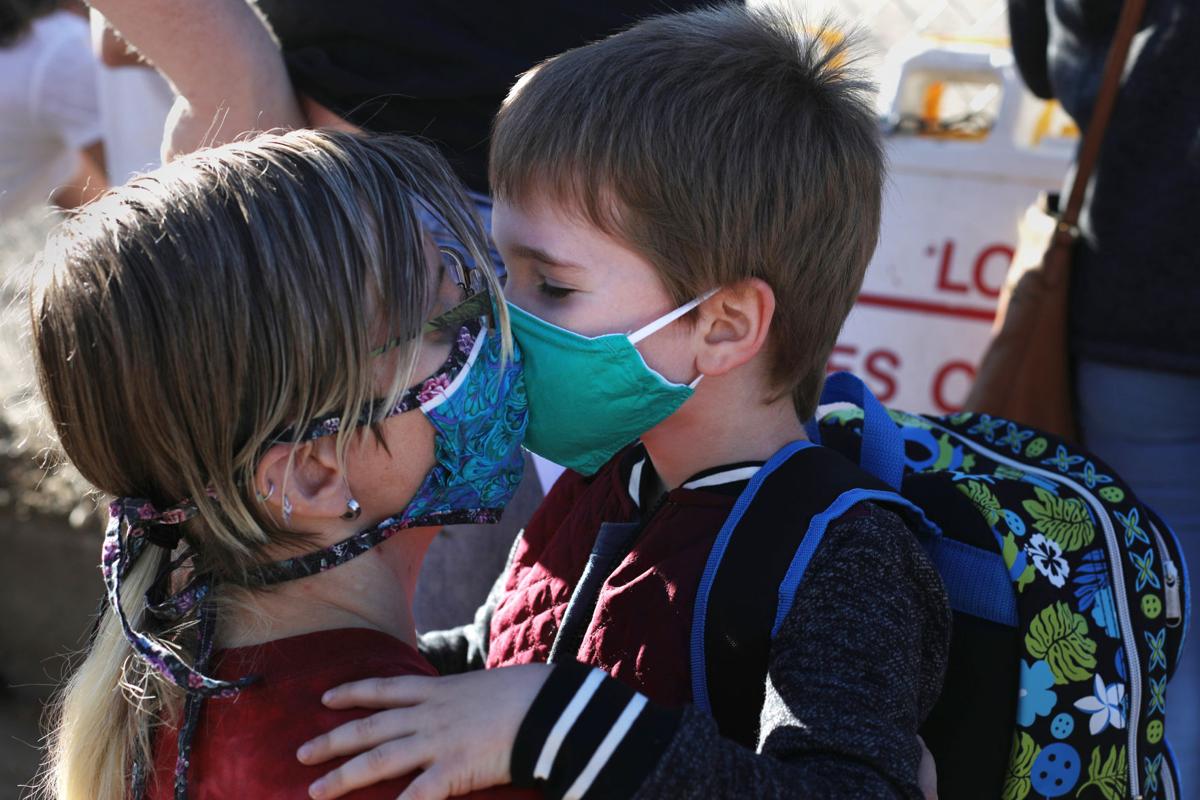 Jessica Christian gives her son Tobias a kiss through their face masks as he is dropped off for his first day of kindergarten at Park Elementary School on Wednesday in Casper. Natrona County schools reopened to students for the first time since their sudden closure in March due to the coronavirus pandemic. 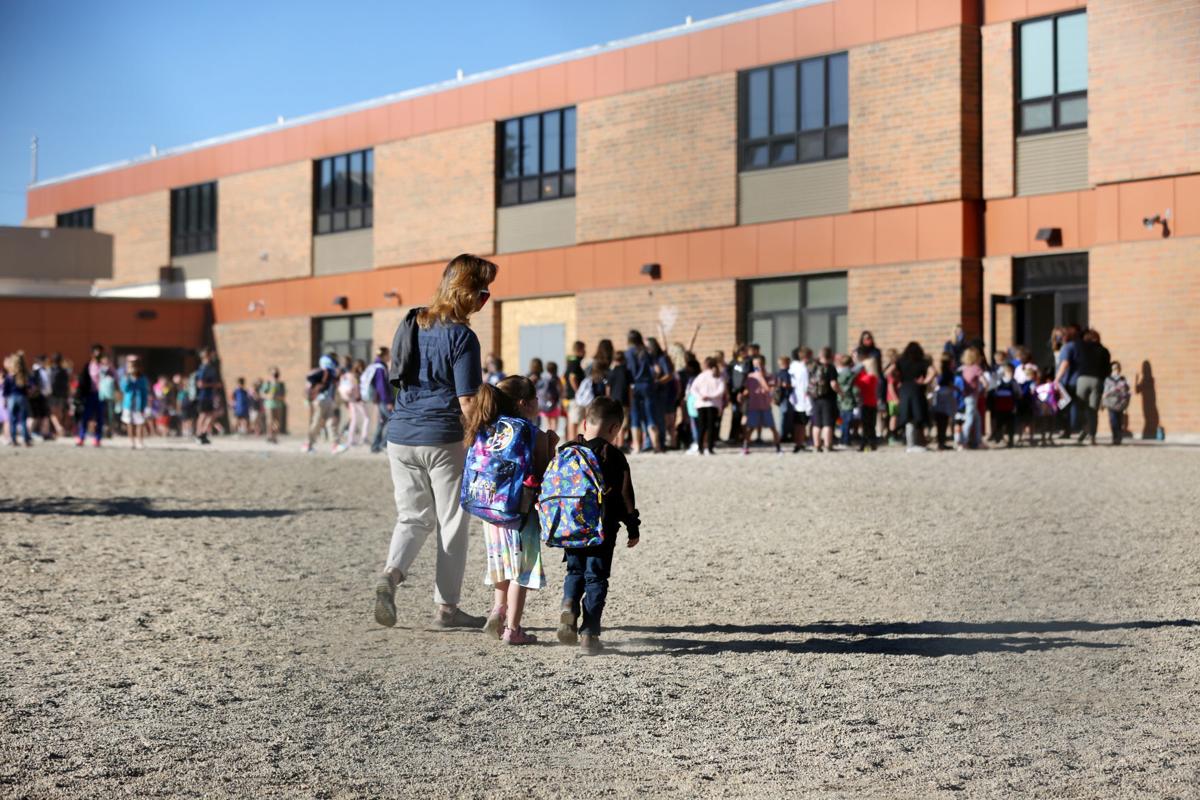 Teachers at Park Elementary School in Casper lead students by grade into the school while following new health guidelines. Parents are not allowed inside school buildings without an appointment, one of the many measures put in place to limit the spread of coronavirus. 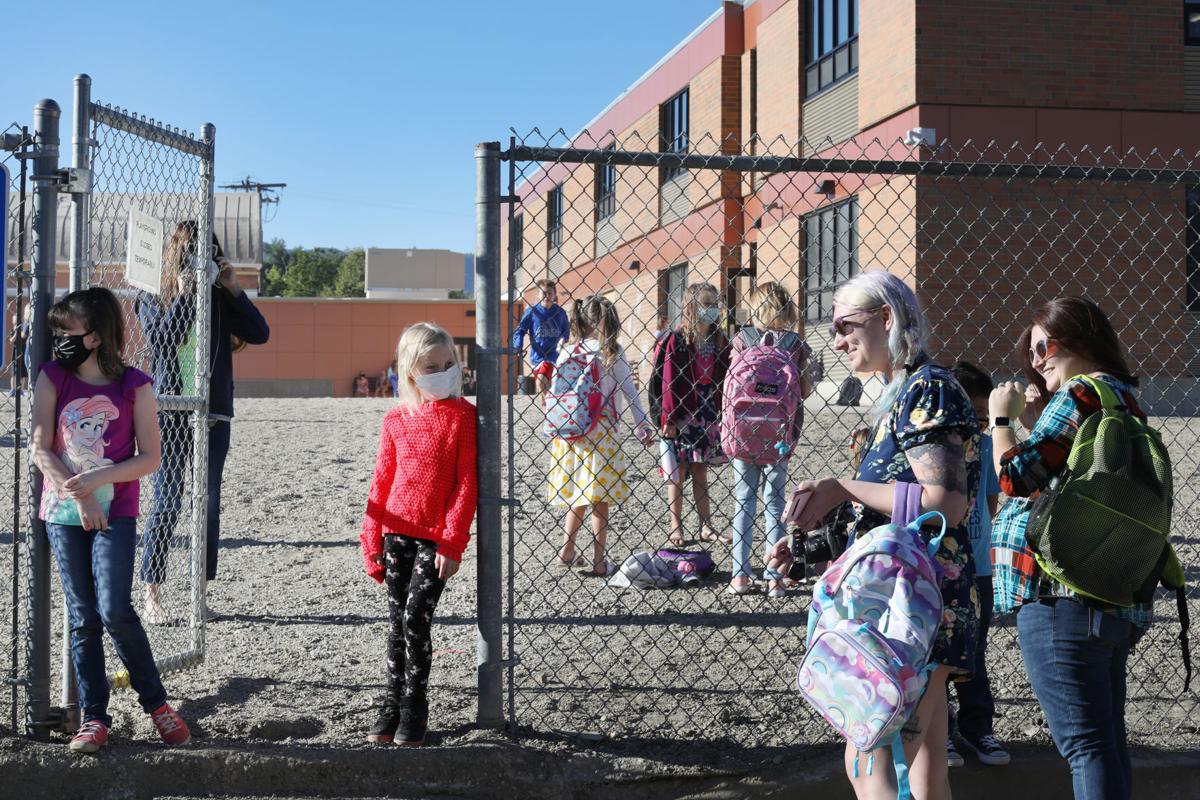 Parents wait outside Park Elementary School as their children are directed inside by grade level during the first day back to school on Wednesday. Students were required to wear masks if they couldn't socially distance. 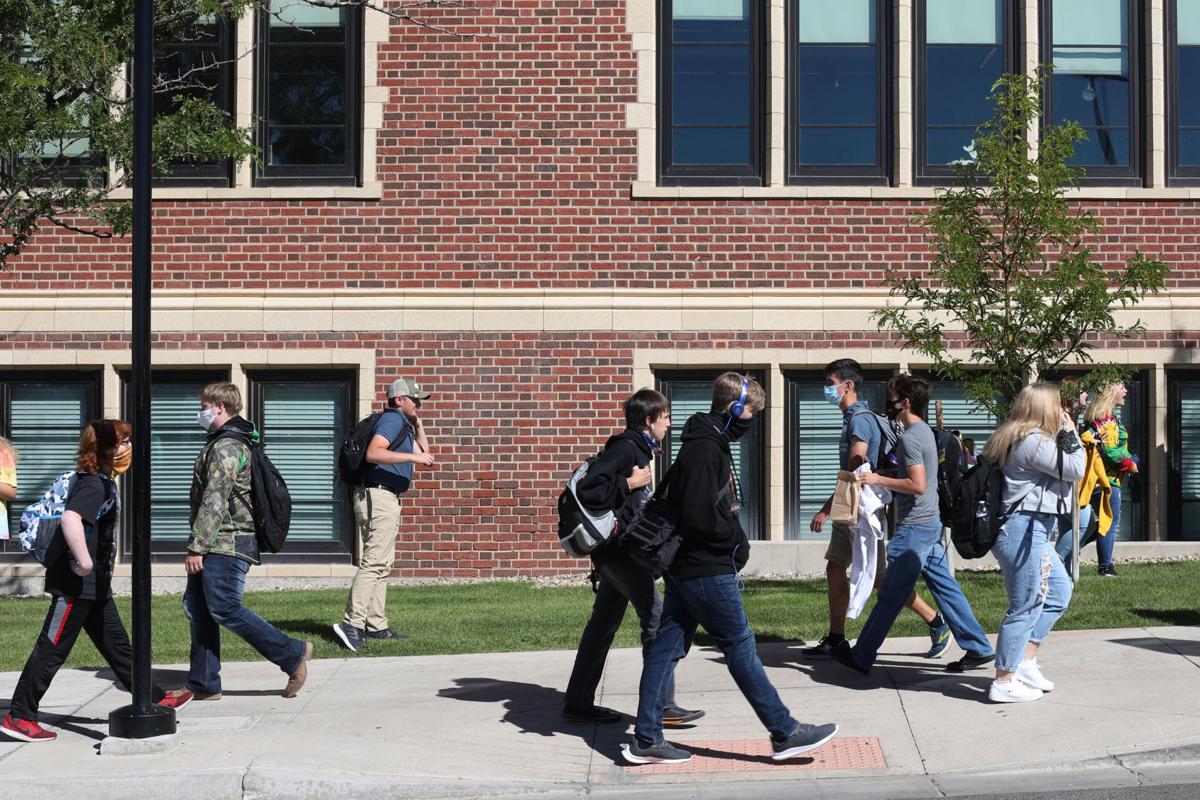 Students exit Natrona County High School at the end of the first day back to school since it closed in March.