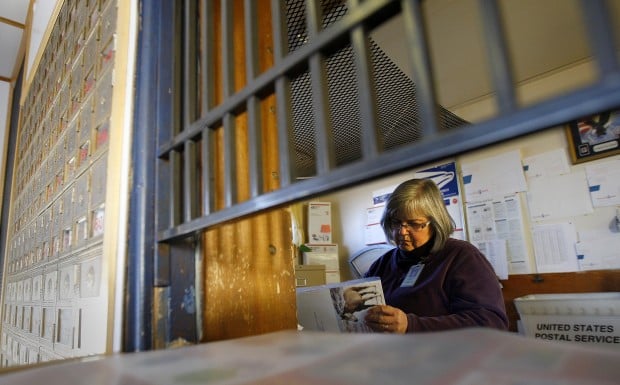 Postmaster Antoinette Benthusen sorts mail shortly after opening at the Powder River Post Office recently. The rural post office is one of 43 in Wyoming being considered for closure by the U.S. Postal Service as a cost-saving measure. 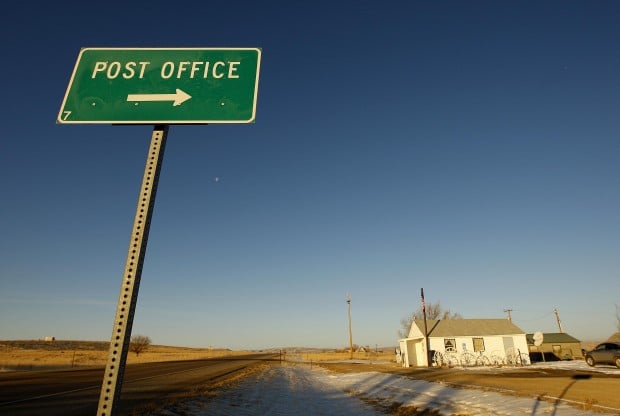 The Powder River Post Office opened in 1904 and has been at its current location on Wyoming Highway 20/26 since 1963, according to documents on site. At one point it was housed in a general store across the street until that building was demolished during a road-widening project.

LANDER — Lloyd Haslam doesn’t want to drive 30 miles to purchase a stamp and mail a letter. He wants to walk across the street to the convenience store in Crowheart, where the community post office sits in the corner.

At least for now, that’s how Haslam gets his stamps and mails his packages.

The U.S. Postal Service is considering closing 40 rural Wyoming post offices next year. It has already decided to close the post offices at Little America, Frontier and Meridan, said David Rupert of Denver, the postal spokesman for Wyoming.

Decisions on whether offices in Smoot, Freedom, Byron and Cora will close are expected by early February, Rupert said.

Currently, no offices will officially close until May 15, after U.S. senators requested a delay. According to a media release, Postal Service officials hope the time will be used to create legislation dealing with mail delivery financial concerns.

Postal Service representatives have already hosted public meetings in each of the Wyoming communities and collected public comment, Rupert said.

“Now it’s that massive amount of data to go through,” he said.

The decision to close post offices was an economic one, Rupert said. However, some on the proposed chopping block will remain open because it would cost more money to close them.

The Wyoming post offices under study are among more than 3,500 nationwide that could be shuttered. The Postal Service, which isn’t tax-funded, has been looking at a variety of ways to save money, from closing offices to moving to five-day delivery. More than 350 post offices have already been saved because it didn’t make sense economically to close them, Rupert said.

Once post offices close, some communities will have an opportunity to open village post offices, where a business takes over the sale of retail items, such as stamps and boxes, Rupert said.

But some communities don’t have businesses that could assume such service.

Powder River in Natrona County is situated on a barren stretch of highway and has a population of 44.

Sue Limmer has lived in the Powder River area her entire life.

She’s watched other businesses close. Now all that remains is a church, grade school and the post office.

The Postal Service told Powder River residents if the office closes, it might provide outside lock boxes for people to receive mail, she said. But many residents are elderly and receive prescription medications in the mail that shouldn’t freeze, Limmer said.

In most communities where post offices close, rural carriers will still bring the mail, Rupert said. “Someone just won’t be there waiting behind the counter to sell you a book of stamps.”

People will be able to order stamps online and send and receive packages with rural carriers in most places, he said.

But Haslam, who served as postmaster of the Crowheart office before he retired 10 years ago, said that isn’t enough. The small station serves about 100 families that have received mail there for years, he said. “The people,” he said, “depend on this post office.”

The post offices at Little America and Meridan are scheduled to close May 15. The postal service announced that in response to requests from U.S. senators, it will not close any post offices until May 15.

This year the U.S. Postal Service also worked to cut costs by consolidating mail processing in communities such as Gillette and Riverton.

Consolidation saves the Postal Service money by having fewer plants to run, but does slow mail delivery. Most places in Wyoming receive mail within two days and that mostly won't change, Rupert said.

However, letters that used to arrive overnight will now take about two days, such as a letter mailed from Gillette to Douglas.

A decision on moving processing from Wheatland, Rawlins and Rock Springs is expected in late January.

The Postal Service won't close facilities or consolidate services until May 15, as requested by U.S. senators.

LANDER -- If you live in the Wheatland, Rock Springs or Rawlins area, your local mail is going to take a little longer to arrive.

No post offices in Wyoming will close in an effort to cut costs, U.S. Postal Service officials announced Wednesday.

The Post Office in rural Powder River, Wyoming is one of over 40 in the state on a list of possible closures as the USPS struggles to balance …

Postmaster Antoinette Benthusen sorts mail shortly after opening at the Powder River Post Office recently. The rural post office is one of 43 in Wyoming being considered for closure by the U.S. Postal Service as a cost-saving measure.

The Powder River Post Office opened in 1904 and has been at its current location on Wyoming Highway 20/26 since 1963, according to documents on site. At one point it was housed in a general store across the street until that building was demolished during a road-widening project.