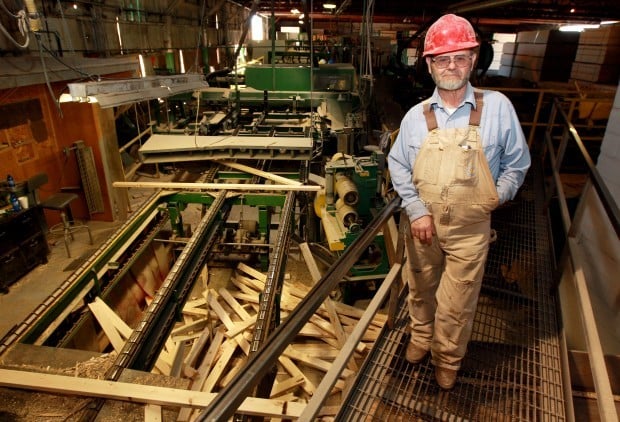 Longtime sawmill employee Orville Howe is shown June 20 at Saratoga Forest Management in Saratoga. The mill, which was operated by Louisiana Pacific Corporation until 2003, recently reopened after about 10 years of inactivity. 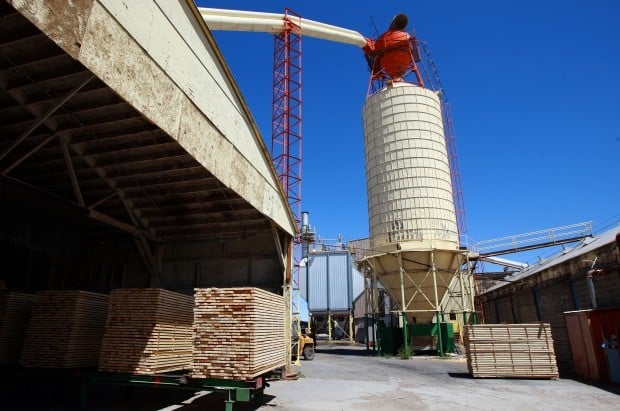 The Saratoga Forest Management sawmill is shown June 20 in Saratoga. The mill, which was operated by Louisiana Pacific Corporation until 2003, recently reopened after about 10 years of inactivity.

SARATOGA -- Much of the machinery needed replacing, most of the workers needed training and the nearby forest was spattered with more beetle-killed timber than ever before, but the once-dormant sawmill at the end of Saratoga's main street has roared back to life.

And the crew is hitting production quotas "hand over fist," its new manager said.

"It's coming along good," Ervin said recently as he walked through the sawmill's planer building, where rough-cut timber is shaved down to industry standard two-by-fours. "We're getting the bugs worked out."

Ervin employs 80 people total at his mill and planer facilities, plus at least 30 loggers to haul timber from the nearby Medicine Bow National Forest. There, the U.S. Forest Service says, a decade-long drought rendered mature lodgepole pine perfect bait for a wood-boring bug called the mountain pine beetle. The beetles have killed nearly all of southern Wyoming's and northern Colorado's mature lodgepole pine trees, according to the USFS.

"Does this look like an old beetle-killed tree to you?" Ervin said, patting a stack of pine two-by-fours bound together and ready to be forklifted away onto a semitrailer.

And without this glut of beetle-killed lodgepole pine, Ervin said, the mill couldn't have reopened.

The warning signs came weeks before the 2003 shutdown. Production slowed and unease grew as weeks of public hearings on a key U.S. Forest Service contract dragged on.

The owner at the time, Louisiana Pacific Corp., said the contract made less timber available from the Medicine Bow National Forest.

The day the sawmill's front gates closed sent shockwaves through the Saratoga community, where logging and the mill had been a steady economic force since before the turn of the last century.

Saratoga's economy "just went through the basement," said Saratoga Forest Management Boiler Supervisor Mike Heaton. Heaton, 51, has lived in Saratoga his whole life. Heaton owned a tire shop in Saratoga when the mill closed in 2003, and did repairs often on logging trucks moving through town. His business took a big hit when the mill shut down, and Heaton closed the shop a month later.

"Most everybody in the valley bought lumber that was produced in the mill," he said.

Friends packed up and moved to Gillette, he said, where coal mines were booming. Heaton took a job as a ranch hand, and later as a worker in oil fields from Cheyenne to Torrington to Wamsutter.

But a traveling life didn't suit Heaton, he said, and he came back to Saratoga to work for Ervin as a boiler supervisor in January.

"I figured just like my uncles and half my cousins, I thought I'd see what it's like to work in the mill or in the woods," he said.

He remembers watching logging trucks roll into town at 2 a.m. as a child. His grandfather worked for the Union Pacific railroad.

"This is home, you know," Heaton said. "From the time I was a little kid, this mill has always been here. It was just a fixture in the community."

A log at the Saratoga Forest Management sawmill starts as a tree -- mostly beetle-killed lodgepole pine -- hauled to the mill's lumberyard on the back of a truck. It is weighed then debarked. Great rotating saws slice each log first into lengths then into two-inch thick planes. Each plane is splayed into boards four inches wide, creating a rough cut of a two-by-four. The boards are stacked and dried in a kiln at least 160 degrees Fahrenheit for 12 to 14 hours. Crew members mark each board before sending it through a 12-knife planer to shave away unwanted roughness.

The whole process can take as little as one day to complete, Howe said. The ultimate product is an industry standard two-by-four either 8 or 9 feet long. So far the new "Saratoga straights" have been shipped to Iowa, Texas, Louisiana and California, among other states, Ervin said.

The sawmill's early success is thanks in large part to a crew with experience, Ervin said, but it hasn't been without its setbacks. An outdoor fire recently set production at the sawmill back two days . Sparks from routine welding maintenance settled under nearby duff and sawdust and ignited unexpectedly overnight, Ervin said

"They watered it down when it was done, but obviously not well enough," he said. "Twelve hours later it ignited."

Fire crews responded quickly and only some wiring was damaged, Ervin said.

But for now, he doesn't want to get too carried away.

"We're taking it one day at a time," Ervin said.

Orville Howe found odd jobs when the sawmill went out of business in 2003.

But a life at the sawmill was all he knew.

He started at the sawmill by pulling boards off a rotating chain at the planer when he was 21, in 1973, shortly after Edward Hines Lumber Co. built the present-day sawmill.

Howe's father was a planerman at the R.R. Crow sawmill, which ran operations in what is now the parking lot of a nearby resort from 1934 until the mid-1960s.

"Once you get sawdust in your blood, you got it," Howe said. Two of Howe's brothers work in the sawmill's planer facility. Howe said he remembers two fires striking up at the sawmill in the 1980s. One left his brother, Ed, burned but alive.

When the sawmill shut its doors in 2003, Howe worked first for a landscaper then another logging company.

"This town was just about dead then," he said.

But Howe stayed. He said he knew the sawmill would reopen someday.

"As long as they're there, I'll be there," Howe said. "When I die, I guess they'll have to take me off the trimsaw."

Wyoming lumber production could double in 2013

Lumber production in Wyoming could be headed toward its best year since the industry hit rock bottom in 2010. University of Montana researcher…

Longtime sawmill employee Orville Howe is shown June 20 at Saratoga Forest Management in Saratoga. The mill, which was operated by Louisiana Pacific Corporation until 2003, recently reopened after about 10 years of inactivity.

The Saratoga Forest Management sawmill is shown June 20 in Saratoga. The mill, which was operated by Louisiana Pacific Corporation until 2003, recently reopened after about 10 years of inactivity.