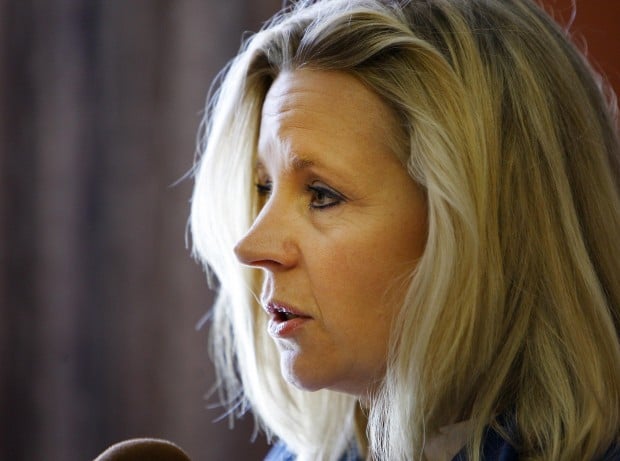 Liz Cheney talks to the press on Wednesday morning at the Parkway Plaza in Casper. 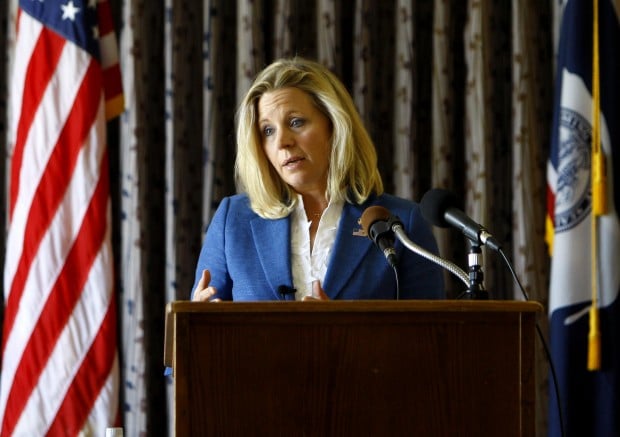 Liz Cheney talks to the press at the Parkway Plaza on Wednesday morning in Casper. Cheney announced the previous day her intention to run against Sen. Mike Enzi in the 2014 U.S. Senate race. 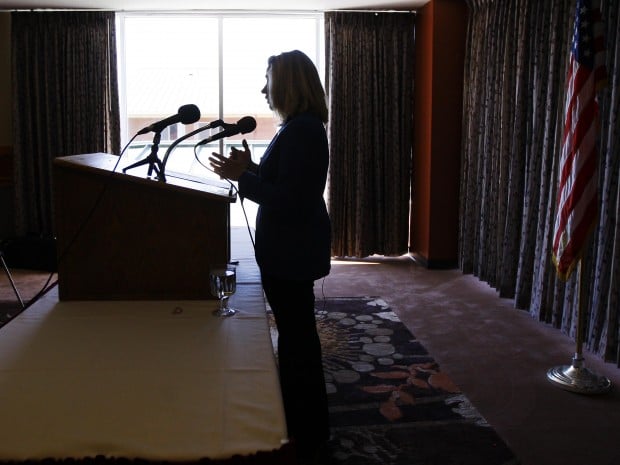 Liz Cheney spent her first day on the campaign trail bolstering her Wyoming ties during her two stops in Casper and Cheyenne on Wednesday.

Skepticism about Cheney’s status as a true-blue Wyomingite arose at her first press conference as a congressional candidate at the Parkway Plaza Hotel. Many have questioned whether her return to the Cowboy State was purely political since she moved to Wyoming from Virginia more than a year ago.

Surrounded by her aunt and uncle — Casper residents Mark and Linda Vincent — Cheney sought to provide an early rebuttal to the claims that she is a carpetbagger.

The daughter of the former Wyoming lawmaker and vice president, Dick Cheney, was quick to dismiss any comments about her residency as nothing more than fodder for people who don’t want to talk about political “substance.”

She touted her days as a student at Park Elementary and Dean Morgan Middle School in Casper and cited her early years on the campaign trail as an 11-year old knocking on doors with her dad. She doesn’t hesitate to call herself a “fourth generation Wyomingite” who knows and cares about the state’s issues.

“Wyoming has always been my home,” Cheney said. “It’s always been a place we returned to. It’s where my heart is.”

Cheney was born in Wisconsin and went to college in Colorado and law school in Illinois. She spent much of her working career as a lawyer in Washington, D.C., and had two brief stints at the State Department.

But in reference to Casper, she said, “This is my hometown.”

After announcing her congressional bid on Tuesday, Cheney is now tasked with taking on an institution in Wyoming politics, senior Sen. Mike Enzi.

With more than 16 years under his belt in the Senate, Enzi is known as a conservative who’s able to reach across the aisle with Democrats.

But in an era when Washington is overrun with dysfunction, Cheney said it is time to relinquish the old guard and make room for a new generation that will “stand and fight.” She didn’t criticize Enzi during the conference, but she expressed a fear of the policies and regulations coming out of the nation’s capital.

In the center of Cheney’s target is the EPA. She said she will help roll out the carpet for America’s next “economic renaissance” by laying the groundwork for policies that will take full advantage of Wyoming’s energy reserves.

She is a staunch supporter of the coal industry, saying that President Barack Obama is waging a war on one of Wyoming’s three biggest natural resources and revenue generators.

“We need a new kind of leadership” in the coal industry, she said.

Aside from the energy industry, Cheney has other bones to pick with the EPA.

A recent leak by the EPA to left-wing environmental groups of private information from more than 80,000 of the nation’s ranchers and farmers is one example of how the administration and federal agencies skirt the law, Cheney said.

“It’s a clear violation of privacy law,” she said.

Fifty of the names and corresponding information came from Wyoming, she said.

The environmental groups had filed a Freedom of Information Act request, and the EPA said it made a mistake in releasing the proprietary information. A group of 24 U.S. senators sent a letter to the EPA asking the agency why it released the information. Enzi and Sen. John Barrasso, R-Wyo., signed the letter.

She supports a repeal of Obamacare, and fears that the role of the IRS in implementing the law could spell trouble for the country. The health care law requires the IRS to collect even more private information from citizens at a time when the agency has been caught targeting political groups, she said.

On the issue of immigration, Cheney said she doesn’t support any bill that would provide amnesty for those who are currently living in the country illegally. She would have voted “no” for the current legislation floating between the House and Senate.

State Rep. Bunky Loucks, R-Casper, attended the press conference. With 13 months until the primary, Loucks — like much of Wyoming — doesn’t know which Republican candidate will get his vote.

“I am happy with Enzi,” he said. “I just had dinner with him. But Liz brings a lot of new things to the table. We need people who can stop federal overreach. She can.”

“I served in both the Wyoming House and Senate with Mike Enzi before becoming his congressional colleague in Washington,” Lummis said in a press release. “He knows Wyoming issues inside and out and works hard for the people of the Cowboy State. Mike is a good friend and I support him now and will in his future endeavors.”

Michigan residents get paid to participate in home heating study

Michigan residents get paid to participate in home heating study

The first poll asking Wyoming voters if they prefer Sen. Mike Enzi or Liz Cheney has the three-term lawmaker coming out of the gate with a com…

CHEYENNE — Liz Cheney announced a core group of state leaders and advisers for her U.S. Senate campaign Thursday that draws from all corners o…

Liz Cheney talks to the press on Wednesday morning at the Parkway Plaza in Casper.

Liz Cheney talks to the press at the Parkway Plaza on Wednesday morning in Casper. Cheney announced the previous day her intention to run against Sen. Mike Enzi in the 2014 U.S. Senate race.