Here's what you should know today: COVID-19 cases have nearly tripled over two weeks amid an onslaught of vaccine misinformation; wildfires in the American West are hurting air quality along East Coast; and two rulings on transgender restrictions are victories for LGBTQ advocates.

Keep scrolling for today's top stories, this date in history and celebrity birthdays.

US virus cases nearly triple in 2 weeks amid misinformation

MISSION, Kan. (AP) — COVID-19 cases nearly tripled in the U.S. over two weeks amid an onslaught of vaccine misinformation that is straining hospitals, exhausting doctors and pushing clergy into the fray.

“Our staff, they are frustrated," said Chad Neilsen, director of infection prevention at UF Health Jacksonville, a Florida hospital that is canceling elective surgeries and procedures after the number of mostly unvaccinated COVID-19 inpatients at its two campuses jumped to 134, up from a low of 16 in mid-May.

“They are tired. They are thinking this is déjà vu all over again, and there is some anger because we know that this is a largely preventable situation, and people are not taking advantage of the vaccine.”

Across the U.S., the seven-day rolling average for daily new cases rose over the past two weeks to more than 37,000 on Tuesday, up from less than 13,700 on July 6, according to data from Johns Hopkins University.

PORTLAND, Ore. (AP) — Smoke and ash from massive wildfires in the American West clouded the sky and led to air quality alerts Wednesday on parts of the East Coast as the effects of the blazes were felt 2,500 miles away.

Strong winds blew smoke east from California, Oregon, Montana and other states all the way to other side of the continent. Haze hung over New York City, New Jersey and Pennsylvania.

The nation’s largest wildfire, Oregon’s Bootleg Fire, grew to 618 square miles — just over half the size of Rhode Island.

The ruling in Arkansas prevents the state from enforcing the law that made it the first state to forbid doctors from providing gender confirming hormone treatment, puberty blockers or sex reassignment surgery to anyone under 18 years old. The law, which was to take effect July 28, also banned doctors from referring the minors to other providers for such treatment.

Click on the links below for full version of today's top stories. Keep scrolling for a look back at this day in history and today's celebrity birthdays:

US virus cases nearly triple in 2 weeks amid misinformation

MISSION, Kan. (AP) — COVID-19 cases nearly tripled in the U.S. over two weeks amid an onslaught of vaccine misinformation that is straining hospitals, exhausting doctors and pushing clergy into the fray.

PORTLAND, Ore. (AP) — Smoke and ash from massive wildfires in the American West clouded the sky and led to air quality alerts Wednesday on parts of the East Coast as the effects of the blazes were felt 2,500 miles (4,023 kilometers) away.

WASHINGTON (AP) — Senate Republicans rejected an effort to begin debate on the big infrastructure deal that a bipartisan group of senators brokered with President Joe Biden, but pressure was mounting as supporters insisted they just needed more time before another vote possibly next week.

CINCINNATI (AP) — President Joe Biden expressed pointed frustration over the slowing COVID-19 vaccination rate in the U.S. and pleaded that it's "gigantically important” for Americans to step up and get inoculated against the virus as it surges once again.

TOYKO (AP) — Jill Biden embarked on her first solo international trip as first lady, leading a U.S. delegation to the Olympic Games in Tokyo, where the coronavirus is surging and COVID-19 infections have climbed to a six-month high.

Hall of Fame college football coach Bobby Bowden announced Wednesday he has been diagnosed with a terminal medical condition.

US women's soccer regroups after stunning loss to Sweden

SEATTLE (AP) — What the expansion draft of the Seattle Kraken lacked in drama it made up for with quirks, production and a giant party to celebrate one of the biggest steps in the launch of the NHL's newest team.

IMAGE OF THE DAY

In 2013, the Duchess of Cambridge gave birth to a son, Prince George, who became third in line to the British throne after Prince Charles and …

In 1963, Sonny Liston knocks out Floyd Patterson in 2 minutes, 10 seconds of the first round to retain the world heavyweight title. See more s…

CDC reverses course on masks in areas where virus is surging; schools included in new guidance

Scientists cited new information about the ability of the delta variant to spread among vaccinated people in announcing new CDC mask recommendations.

'The war has changed': CDC document warns Delta variant appears to spread as easily as chickenpox

The document — a slide presentation — outlines unpublished data that shows fully vaccinated people might spread the Delta variant at the same rate as unvaccinated people.

The nation's top health agency was expected to backpedal on its masking guidelines and recommend that even vaccinated people wear masks indoors.

A 13-year-old girl was hit in the face by a seagull while riding an amusement park ride in New Jersey. Here's video courtesy of the Press of Atlantic City.

President Donald Trump urged senior Justice Department officials to declare the 2020 election results "corrupt" in a December phone call, according to notes from a participant.

Biden to announce end of US mission in Iraq; typhoon headed for Olympics; Jan. 6 committee to start work

President Biden set to announce end of U.S. mission in Iraq; typhoon headed for Olympics; and Jan. 6 committee begins work. Get caught up.

The Biden administration will allow a nationwide ban on evictions to expire Saturday, arguing that its hands are tied after a Supreme Court ruling.

US Senate GOP: Deal reached, ready to move ahead on infrastructure bill 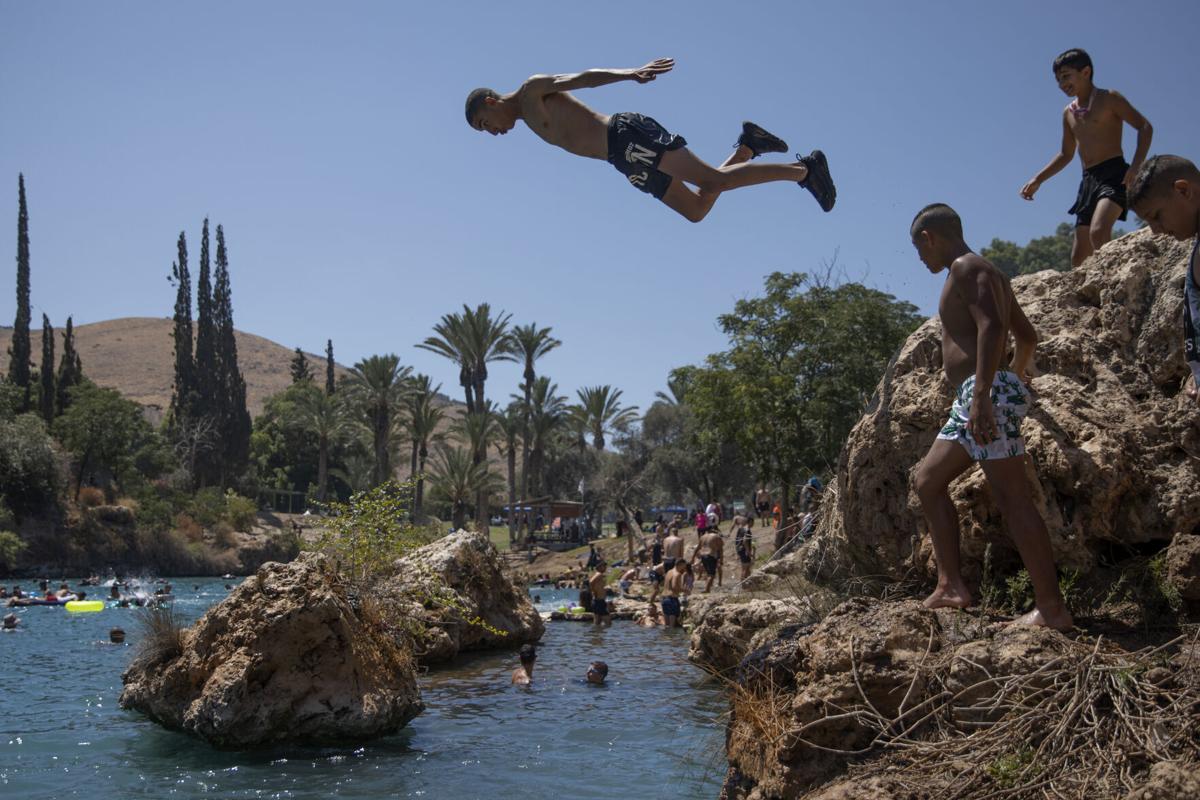 Israeli Arab youth jump in the water during the Muslim Eid al-Adha holiday at the Gan HaShlosha National Park near the northern Israeli town of Beit Shean, Wednesday, July 21, 2021. Eid al-Adha meaning "Feast of Sacrifice," this most important Islamic holiday marks the willingness of the Prophet Ibrahim (Abraham to Christians and Jews) to sacrifice his son. During the holiday, which in most places lasts four days, Muslims slaughter sheep or cattle, distribute part of the meat to the poor. 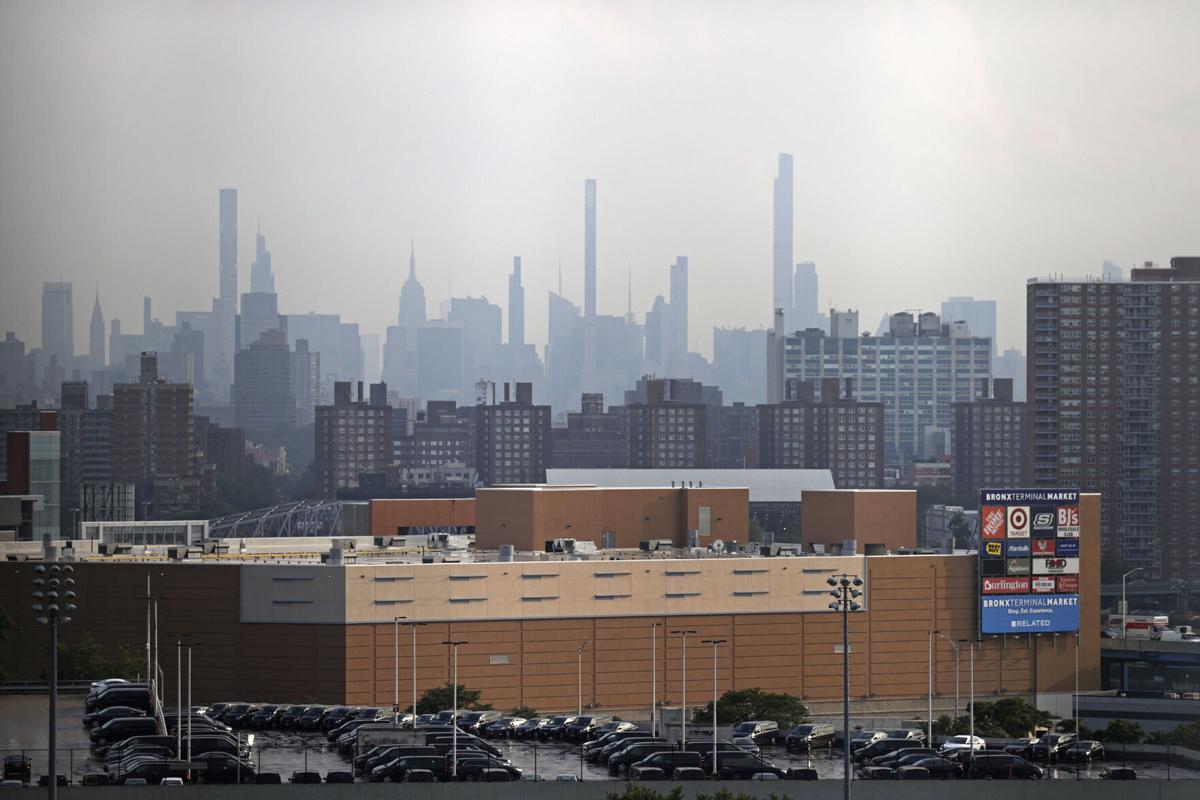 Manhattan is seen from Yankee Stadium through a haze of smoke before a baseball game between the Philadelphia Phillies and the New York Yankees, Wednesday, July 21, 2021, in New York. 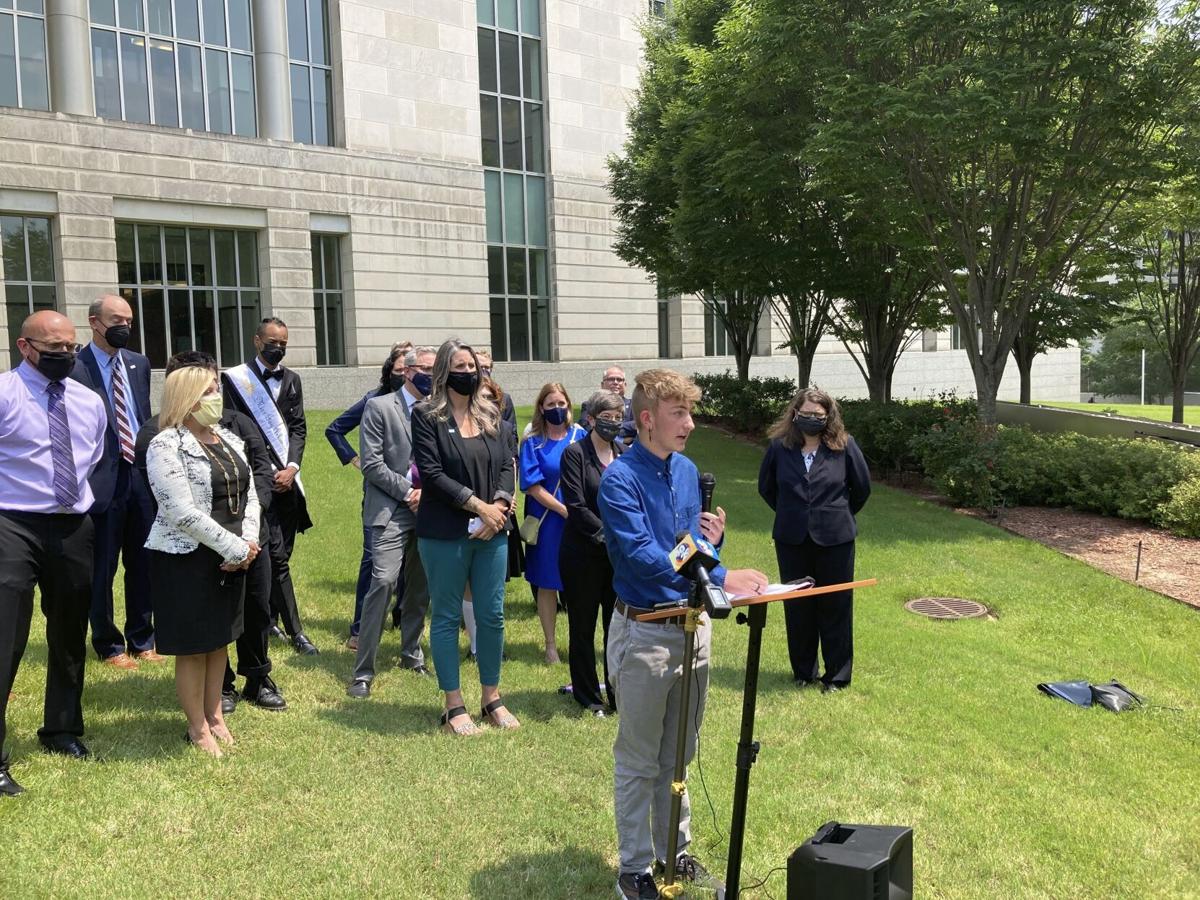 Dylan Brandt speaks at a news conference outside the federal courthouse in Little Rock, Ark., on Wednesday, July 21, 2021. Brandt, 15, has been receiving hormone treatments and is among several transgender youth who challenged a state law banning gender confirming care for trans minors. A federal judge on Wednesday blocked that law's enforcement.

FILE - In this June 13, 2021, file photo, a Silver Dollar City employee takes the temperature of guests before they are allowed to enter the park just west of Branson, Mo. Across the U.S., the seven-day rolling average for daily new cases in the U.S. rose over the past two weeks on Tuesday, July 21.