All eyes were on a Minneapolis courtroom Tuesday, where a jury delivered guilty verdicts on all counts against former police Officer Derek Chauvin, convicting him of the murder of George Floyd.

“I’ve seen it so many times, the cop usually gets off,” Simmons said. “I was set for the jury to go the other way.”

People in Casper are raising their voices to protest racism and police brutality. Here are six of their stories.

Simmons says since the summer’s protests, momentum for Casper’s own conference chapter has grown. He said Tuesday that the Casper group is around 70 strong, but the pandemic has delayed starting an official chapter.

But one convicted officer in Minnesota doesn’t mean the whole system is going to change, activists from the Laramie Human Rights Network said Tuesday. Around 1% of U.S. officers who kill someone on the job face charges, and just 0.3% are convicted, according to data from watchdog group Mapping Police Violence.

“The verdict still means that George Floyd was murdered,” Illyanna Saucedo said. “It’s better than Chauvin being acquitted, but that is a pretty low bar for seeking justice.”

Karlee Provenza, executive director of Albany County for Proper Policing, said she heard from some locals Tuesday who compared the Chauvin case to that of Derek Colling, the Albany County Sheriff’s deputy who shot and killed Robbie Ramirez in 2018. A grand jury declined to indict Colling, who was involved in two earlier deadly shootings while working in Las Vegas and now faces a civil lawsuit filed by Ramirez’s family. The Laramie shooting prompted protests and calls for reform in Albany County.

“Watching that (Chauvin) verdict, is it justice? No, not really,” said Provenza, who is also a state representative out of Laramie. “I think justice is stopping police use of lethal force before it happens rather than going through the punitive system.”

Provenza said change needs to come through legislation and local policy to stop similar events from happening again. Wyoming’s policing statutes have remained unchanged for nearly 50 years, and attempts at reform in the Legislature this year failed.

There are some areas opening up to change in Wyoming — in Laramie, for example, the city is considering installing a civilian oversight board for its police department. It would be the first of its kind in the state.

“That was something that the city of Laramie wasn’t considering before George Floyd’s death,” Provenza said. “To have this national conversation come here and spark protests opened up an opportunity to get some of that oversight.”

But Saucedo said the Laramie Human Rights Network has yet to see any concrete reforms by law enforcement in Albany County.

In Casper, activist Mariah Bovee said she had conversations with the police department last summer about how to make policing more transparent and weed out bad officers. She says she doesn’t see it as an “us versus them” or police-versus-citizen issue, but a community issue where everyone has a stake.

Bovee said Chauvin’s conviction is a step in the right direction, but she sees a lot of work that still needs to be done both in Wyoming and at the federal level. For a start, she said Wyoming needs to enact hate crime legislation (which also failed in the Legislature in March).

She cites issues with qualified immunity for officers, adding to a list of demands Bovee called for during a march in Casper last June in reaction to Floyd’s death — including bias screenings, anti-racist and de-escalation trainings and citizen review boards.

“It’s going to take a cultural shift. It’s going to be slow, but you have to keep at it,” Bovee said. “I’m seeing some small shifts. I’m very hopeful with our young people, because I think they are going to demand those changes.”

Those in attendance stood in silence for nearly 9 minutes, the length of time a police officer knelt on George Floyd's neck.

Crime and justice bills: What passed and what didn't during this year's legislative session

Around a dozen people gathered for the "Speak the Peace" vigil and march Sunday night, to honor recent victims of police violence while also showing support for the Casper police. 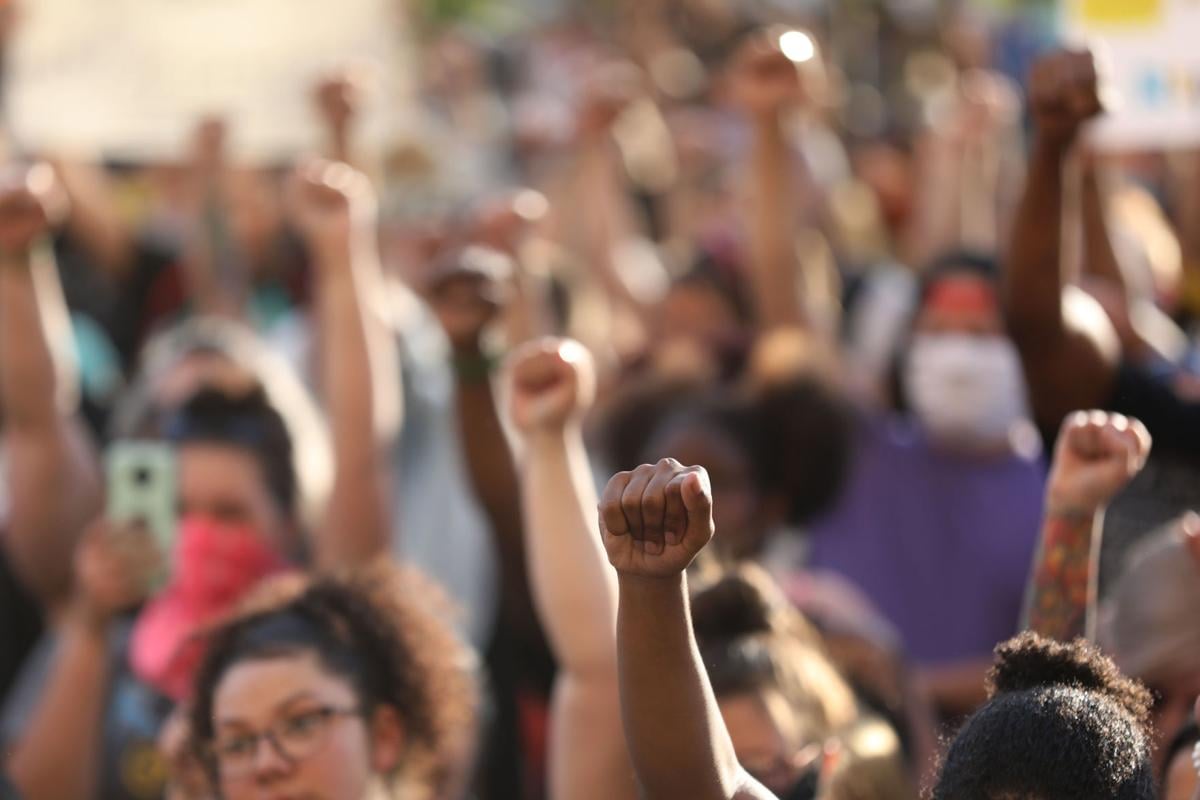 During a moment of silence, demonstrators raise their fists in solidarity at a vigil for George Floyd in front of the Hall of Justice in Casper on June 5. Former police Officer Derek Chauvin was convicted Tuesday of murdering Floyd. 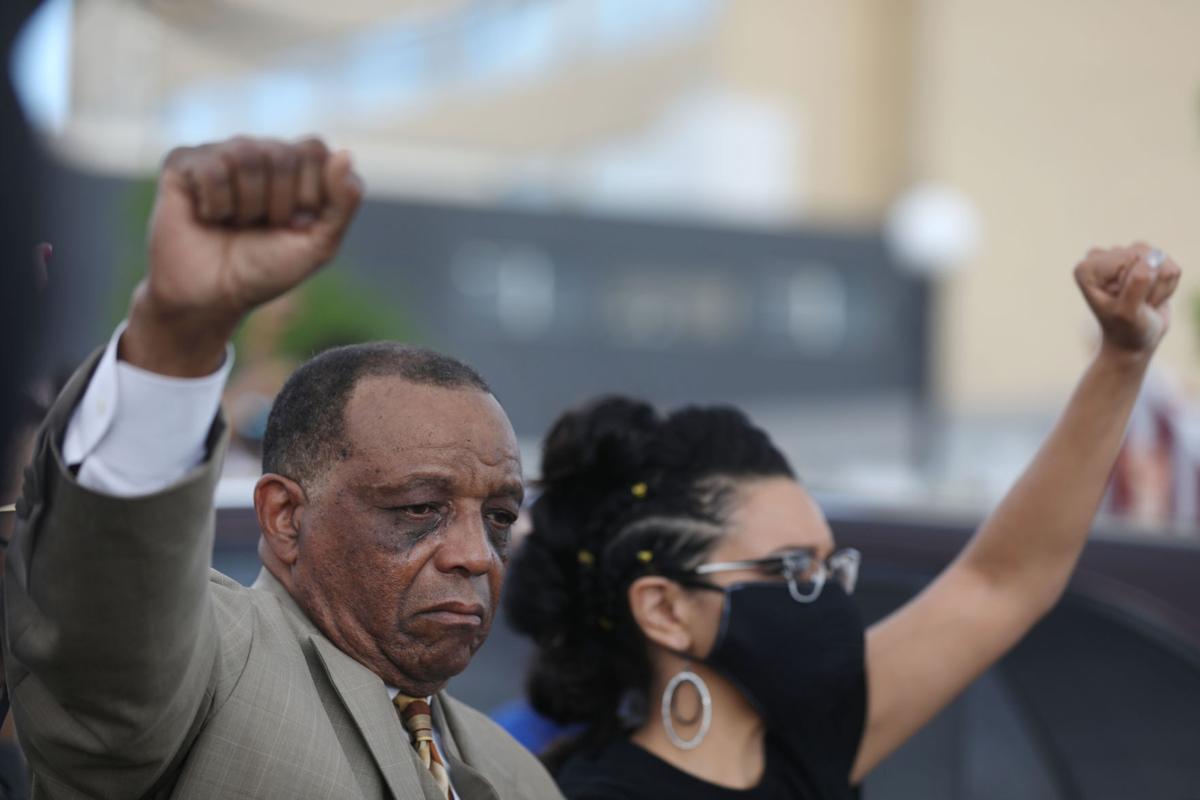 Jimmy Simmons holds his first in the air as tears fall down his face during the eight minutes of silence in honor of George Floyd on June 5 in Casper. Floyd was killed by Minneapolis police officer Derek Chauvin, who knelt on Floyd's neck for over eight minutes. 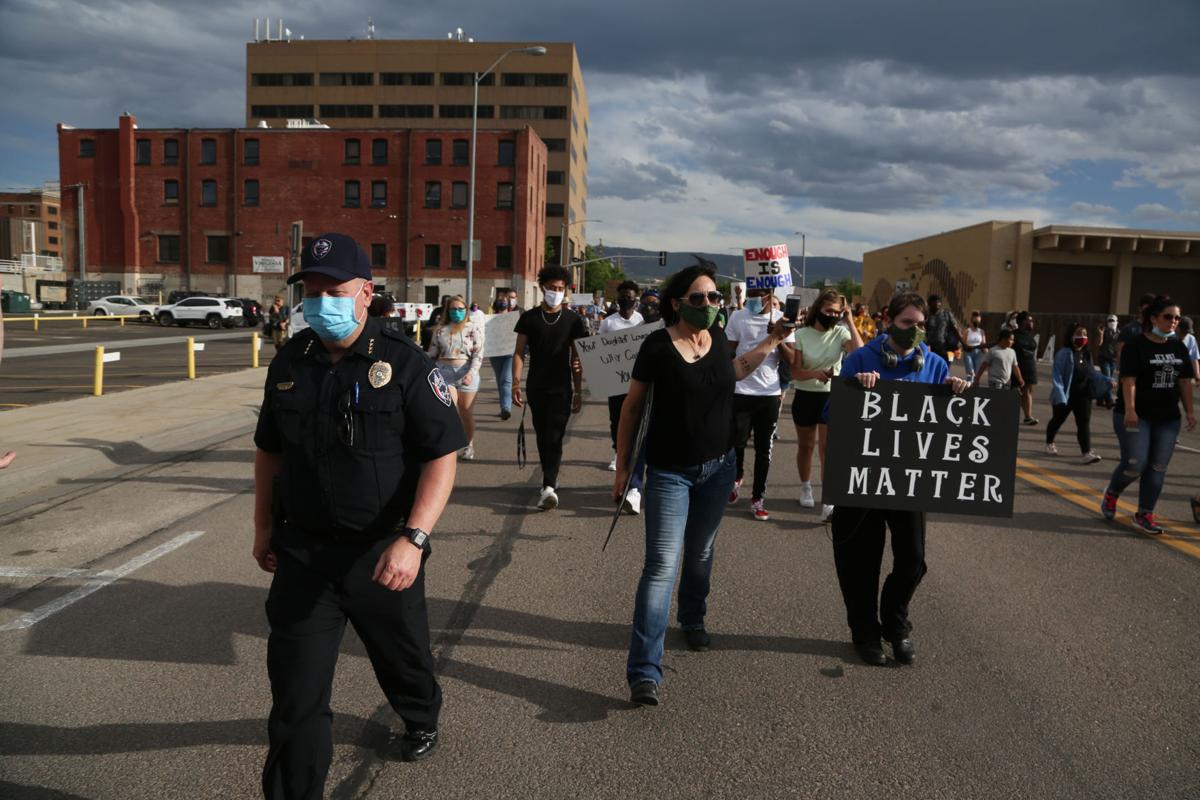