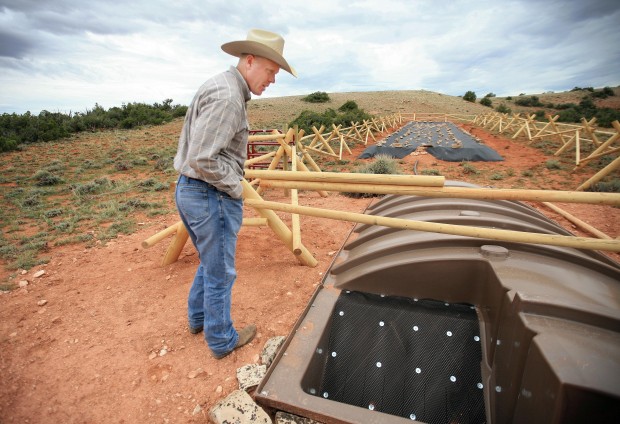 Jared Bybee, wild horse and burro specialist for the Bureau of Land Management, checks on a guzzler tank that is part of a rainwater collection system that provides water to the wild horses on the range in this photo taken late last week. (Casey Riffe/The Billings Gazette) 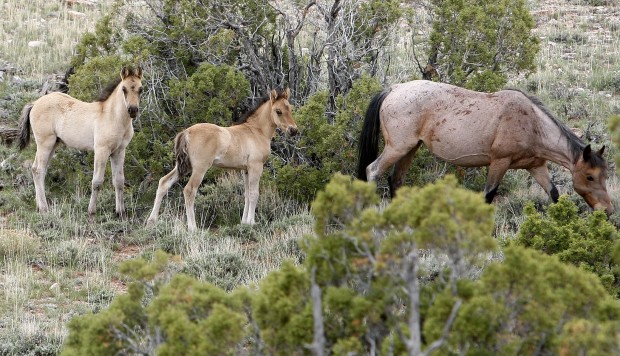 PRYOR MOUNTAIN WILD HORSE RANGE -- The thump-thump-thump of an approaching helicopter can mean roundup time for the wild mustangs that roam free on these juniper- and pine-dotted slopes, a controversial operation that last year drew protesters. But on Wednesday, the Bell 206L4 helicopter piloted by Josh Hellyer was carrying equipment that, once assembled, will help water the horses and spread them out across the high-desert rangeland.

"This might be the most ambitious guzzler project in the U.S.," said Jared Bybee, wild horse and burro specialist for the Bureau of Land Management.

Guzzlers are plastic tanks. The ones being installed on the Pryor range are 8 feet wide, 16 feet long, weigh 1,000 pounds and will hold 1,800 gallons of water. At one end of the tank is a trough where the wild horses and other wildlife can drink.

The guzzlers are filled by a catch basin. The catch basin is created by mounding up dirt into a sink-like design. The basin is then lined with a 20-by-100-foot sheet of black, rubberized material that's anchored with rocks. A hole at the downhill end of the basin funnels any rainwater or snowmelt into a plastic pipe that feeds the guzzler. The entire setup is enclosed by a wooden fence to keep the catch basin from being trampled or the material from being punctured.

Ten of the guzzlers will be installed by hand on the range over the next month by crews made up of BLM, National Park Service and Montana Conservation Corps workers and volunteers. The total cost in materials for each of the guzzlers is about $10,000, making the entire project a $100,000 venture. Funding comes from the BLM's wild horse fund.

At last count, the range was home to 140 horses that are descendants of the original horses shipped to the Americas from Spain. Already this year, 24 foals have been born, about one-third of which traditionally live to adulthood.

The idea behind the guzzlers is to spread horses out across the 38,000-acre range that is sandwiched between the Custer National Forest to the west, the Bighorn Canyon National Recreation Area to the east and the Crow Reservation to the north. The range is about 70 miles south of Billings, Mont., along the Montana-Wyoming border.

A recent study of the habitat found the range was being overgrazed, although wild horse advocates disagreed and challenged the findings. To lessen the grazing pressure, the BLM last fall rounded up the horse herd and removed 57, 52 of which were adopted out.

At present, the mustangs tend to congregate on the upper mountain, where water fed by snowmelt pools. Adding guzzlers at mid-mountain, along Sykes Ridge and one at the top of the mountain should allow the animals to spread out.

The third prong of the management plan is to treat some of the mares with contraceptive drugs to reduce the number of foals.

The BLM had hoped to install the guzzlers sooner, but the challenge by wild horse advocates to the range's management plan delayed action until this year. As a consequence, the devices missed the wettest time of the year in the dry region. And this winter was drier than normal. But Bybee said it only takes about 2 inches of precipitation to fill a guzzler. The average annual rainfall at the bottom of the range is about 6.5 inches, rising to as much as 12 inches at the top of the mountain.

The components to construct the guzzlers were being flown up the mountain by BLM's 10-member Eastern Montana Helitack crew. Assistant helicopter crew supervisor Henry Gilliland, of Birney, said it would take about 27 flights over the course of three days to haul all the materials. They started on Tuesday.

"This is a good training opportunity for new folks rather than in the heat of battle," Gilliland said.

It's a fine art to correctly balance the loads that are tethered beneath the helicopter, especially the large guzzler tanks that can act like an airfoil once airborne and complicate flying the helicopter.

"There's so much wind resistance from it," said Bob Flesch, assistant fire management officer for BLM.

With the first tank delivery, the crew hooked it up so the tank flew on edge, using two anchoring points. But it proved ungainly, requiring a slow flight. The second tank was anchored flat, upside down, using four anchoring points.

"I don't want to get too close to these ones. I don't trust them," Gilliland said as Hellyer piloted the copter in for the guzzler's pickup. "They're bigger than the helicopter in size."

Leaning out the door to position the chopper, Hellyer waited for the clevis to be attached and began lifting the guzzler. Everything looked much better with the new configuration.

"I can already tell that's going to fly better, much better," Gilliland said.

"Yeah, it's 100 times better," Hellyer responded over Gilliland's radio as the helicopter banked a turn and thumped up the mountain.

The allegations include that she listed a customer’s license plate tabs as lost in the mail but then placed them on her own vehicle; that she adjusted the tax system to hide missing money; and that she issued a false certificate so that a personal friend could avoid paying registration fees.

Authorities said the three were traveling from Bismarck to Sheridan.

Man dies after being run over by semi-truck in Cheyenne

Police say the man was sleeping under the semi-truck when it was parked. He was run over when the vehicle started moving again.

During the wreck, the SUV went airborne twice before coming to rest on its roof.

The drugs have an estimated street value of roughly $150 million, according to the Wyoming Highway Patrol.

The Wyoming Democrats will be the 17th state party to unionize.

What happened to free airport parking in Wyoming?

Quietly, just before the pandemic panic of March 2020, free airport parking in Wyoming was taken away.

Jared Bybee, wild horse and burro specialist for the Bureau of Land Management, checks on a guzzler tank that is part of a rainwater collection system that provides water to the wild horses on the range in this photo taken late last week. (Casey Riffe/The Billings Gazette)