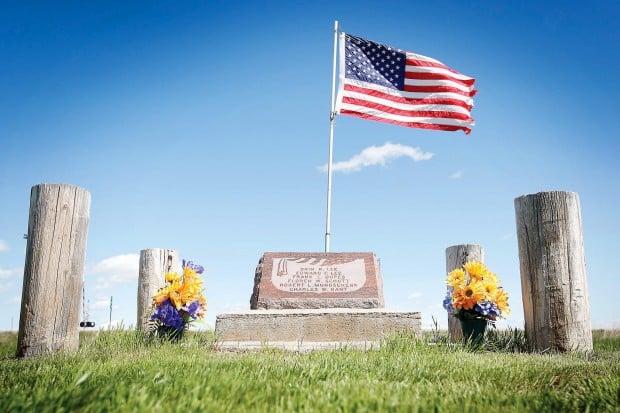 A headstone off U.S. Highway 18/20 serves as the only marker for six Keeline residents who died in World War II. Today, the town has only four residents. (Tim Kupsick/Star-Tribune) 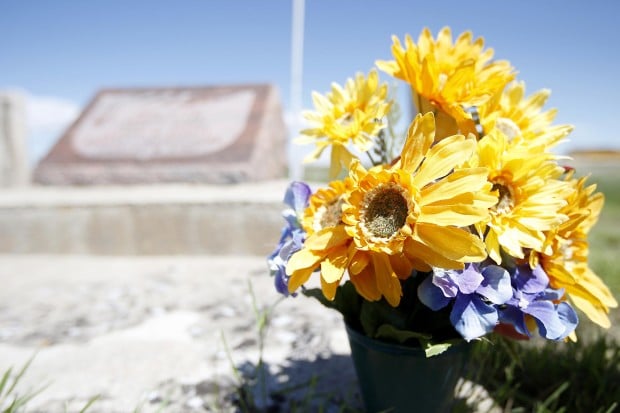 Sheron Tucker replaces the silk flowers each season to honor the memory of the six men memorialized in Keeline. (Tim Kupsick/Star-Tribune) 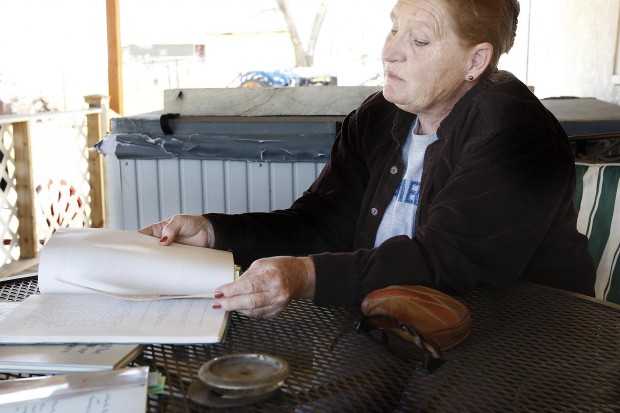 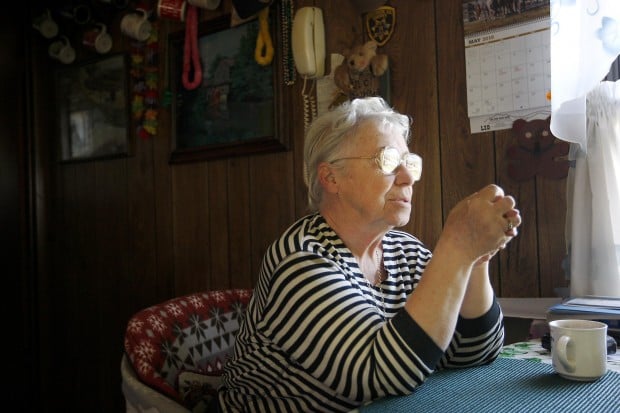 Sheron Tucker has lived in Keeline for 29 years. She buys flowers for the World War II memorial every time she visits her husband's grave in Manville. (Tim Kupsick/Star-Tribune)
By MARGARET MATRAY - Star-Tribune staff writer

KEELINE -- In an expanse of empty prairie, a stone sits alone, forever rooted to the earth.

It's 20 miles from anywhere; two lanes of US Highway 18/20 its only connection to the rest of the state.

You'll find it located just off the road.

The stone is rose-colored and set in cement, about the size of a modest grave marker. From the grass nearby, a metal pole climbs skyward. A flag whips in the wind, its red and white stripes tearing at the seams.

An occasional car whizzes by. No one notices it.

This place once boomed. A photograph from 1921 shows a general store and a lumber yard and a hotel and horses pulling buggies. Keeline had a school, churches, a post office, a gas pump. It held school dances for the children. It sent men to fight in the Atlantic and Pacific.

But now this town in eastern Wyoming is deserted, from population 440 down to four.

Six men who went to war never came back. Decades have passed, and their families are gone. What's left is the stone:

Twenty miles away in Lusk, the Stagecoach Museum doubles as a historical society for Niobrara County. Visitors who look past the coach and stage line artifacts will find obituaries and newspaper articles, local family histories and photographs of towns that no longer exist.

Judy Smith's not sure how much inventory the museum has. They've never counted. But if there was a place keeping tabs on the Keeline memorial, this would be it.

In a file folder dedicated to subjects starting with W, there's a section for World War II ration books, Wyoming historical maps and "Wyoming: A History." Nothing for "war memorial."

Judy found one picture of the stone in Keeline. It's a photocopy of a photocopy with no name or date attached.

The Niobrara County Library has the same picture. An occasional request will come in for information on the stone, but the librarians have searched everywhere. Answers to who put it there, when and why never surface.

Lusk resident Winifred Bryant has seen it, too. She published the photo in "The War Years: Niobrara County, Wyoming," a book that tells the stories of veterans and war dead.

A woman once called Winifred at home. She wanted to know who took care of the Keeline memorial. It looked abandoned, she said.

Winifred thought the post office managed it, but that was years ago. She wasn't sure anymore.

"I just knew it was there," she said.

What the Stagecoach Museum has that others don't is a collection of documents and pictures donated by those who clipped and saved. Some items come in after county residents die, when their children don't know what else to do with the stuff.

Each item is given a code number, so the donor and year can be traced.

One slipped through the system.

Judy discovered a green scrapbook whose creator saved death notices from World War II, the Korean and Vietnam wars. There, on pages next to one another, the scrapbooker glued the obituaries for the men from Keeline.

They represented the Marines, Navy, Army and Army Air Corps -- every branch of the military in both theaters.

Their families migrated to eastern Wyoming in the early 1900s, when the only building in Keeline was a small boxcar. They turned open fields into a community, from one store to a town with a home on every half section of land.

Frank Dupes was the first from Keeline to enlist and the first in the county to die.

He was killed in action at the Battle of Midway, a Marine who directed anti-aircraft fire for the Sixth Defense Battalion, Fleet Marine Force.

He was buried at sea in June 1942. Edward Lee enlisted two months later.

A paratrooper, Edward jumped across enemy lines for 21 months, was wounded in the invasion of Italy and again before D-Day. He died in Belgium at the Battle of the Bulge.

Edward's cousin, Orin Lee, served as a staff sergeant on a bomber for two years before he was listed as missing in action over France. His body was never recovered.

As its men died, so did the town of Keeline. Years passed, and businesses failed.

Homesteaders were given 360 acres and three years to make it work. If they succeeded, the deed to the land was theirs. But the soil proved challenging, the climate severe. Many moved away.

By 1945, the nearby town of Jireh had completely dissolved. Some buildings in Keeline were moved elsewhere. Others fell apart. Roads washed away, reclaimed by the earth.

Floren Schutt wrote his mother in January 1945 to say he was OK. One month later she got another notice, this time that her son was killed in Germany.

It wasn't until the end of 1945 that the Secretary of War declared Charles Kant dead.

Anti-aircraft fire damaged his B-24 in a bombing mission over Bremen, Germany, two years earlier. When last seen, the plane had dropped altitude, disappearing into the clouds. Remains were never found.

Aboard the U.S.S. Cassin Young, Robert Mundschenk, one of the first to enlist, survived invasions and attacks for more than a year in the Pacific. A kamikaze plane exploded over the No. 1 fire room July 30, 1945, eight days before the Cassin Young would return to the U.S.

Sixty-five years have passed since the last Keeline man died at war. Siblings and friends of the deceased -- the ones who would know how the memorial got to Keeline -- are now dead themselves.

It took Winifred Bryant four years to complete her book on WWII servicemen and women of the county. People kept telling her they wanted to submit information, if she would just wait a day or two. Even still she knows the book isn't complete.

"We've lost a lot of information," she said. "Many have passed away."

Nieces and nephews of the men memorialized at Keeline know the stone is there. They remember their parents, aunts and uncles visiting, leaving flowers.

His father kept quiet about war. Steve doesn't know much about the Kant brothers' service, other than they caught flak for their German name. He thinks that's why they enlisted, to prove they cared for America.

He remembers family members pointing out the rose-colored stone in Keeline when he was very young. But those who would know more can't answer.

"His generation is gone," Steve said.

At 69, Sheron Tucker is the oldest Keeline resident.

She and her husband moved here in 1981. Foundations from homes that once rested in Keeline would occasionally surface on their property, but Sheron's never had more than three neighbors.

From her home on top of a hill, she can see the memorial through her front windows. It was there when she arrived.

"Years ago a guy would come from Casper," Sheron said. "He hasn't been here three, four years."

She figures the stone mattered to someone, even if no one visits anymore. So she tends to a memorial for men she never met.

Last week Sheron cut the grass, just enough around the stone before it started to rain. She said she'll have to wait for the ground to dry before she can finish.

She builds small bouquets of silk flowers, because real ones would blow away. She visits when the seasons change, when she puts new flowers on her husband's grave in Manville.

Sheron doesn't know who will take care of the memorial when she's gone. Her children keep telling her to move closer to them, to leave Keeline. But she has no intentions of vacating. As long as she can, she'll bring flowers to the stone.

Her neighbor manages the flag, but he's been out of town. Instead, this year, Raelena Stull drove from Shawnee to raise it.

She was house-sitting and had been meaning to do it for awhile. At 5 feet 2 inches, she was too short. She had to come back with a ladder, and finally hooked the flag.

Raelena remembers hearing her uncle talk about his war days. She wishes she had interviewed him when he was alive: "I should have listened more."

Now, there's no record. Only memories of stories.

Raelena wonders what will happen to Keeline, to the stone. She figures it will all be gone one day, swallowed in a sea of sagebrush and sky.

"It's kind of a strange thing," Raelena said, "how life goes."

Shirley Samuelson died in August when a street sweeper she had just parked on Highway 22 in Teton County rolled downhill and ran her over.

"The 2020 presidential election was not stolen. Anyone who claims it was is spreading THE BIG LIE, turning their back on the rule of law, and poisoning our democratic system,” Cheney wrote.

Gov. Mark Gordon’s office will develop the bulk of the next state budget without cuts thanks to improved revenue projections released last wee…

Rep. Cyrus Western said Monday he does not plan to resign. "I'm going to let the voters have the final say on this one," said the Sheridan Republican, who is up for reelection next year.

Club For Growth confirmed that it was shopping around Wyoming the last week of March for a challenger to face Rep. Liz Cheney in her 2022 House primary.

The three victims were shot in their limbs and expected to survive, officials said.

There are now 37 Wyomingites hospitalized with COVID-19, the most since Feb. 15.

Employees working at the Microsoft data center were told to hide while Boutelle was on the scene and eventually evacuated the building.

The former Wyoming legislator from Green River entered not guilty pleas to misdemeanor charges of solicitation of prostitution and interference with a peace officer.

Darin Smith ran in the 2016 primary, finishing fourth with 15% of the vote as Rep. Liz Cheney won.

A headstone off U.S. Highway 18/20 serves as the only marker for six Keeline residents who died in World War II. Today, the town has only four residents. (Tim Kupsick/Star-Tribune)

Sheron Tucker replaces the silk flowers each season to honor the memory of the six men memorialized in Keeline. (Tim Kupsick/Star-Tribune)

Sheron Tucker has lived in Keeline for 29 years. She buys flowers for the World War II memorial every time she visits her husband's grave in Manville. (Tim Kupsick/Star-Tribune)
© Copyright 2021 Casper Star Tribune, 170 Star Lane Casper, WY | Terms of Use | Privacy Policy
Powered by BLOX Content Management System from TownNews.com.
You don't have any notifications.