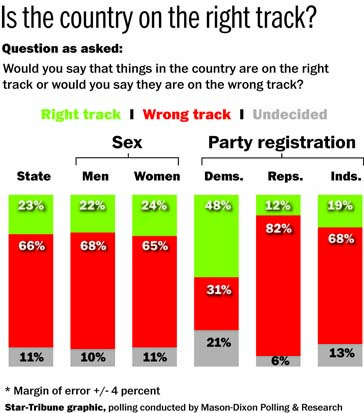 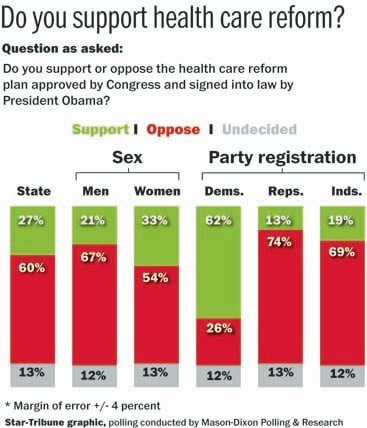 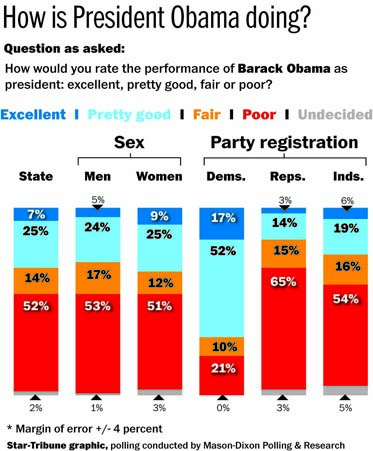 A Gallup poll released Monday found Wyoming, long a solidly Republican state, to be the most conservative state in the nation along with Mississippi: 53 percent of Wyomingites declared themselves to be conservatives.

But a separate poll conducted last week for the Casper Star-Tribune shows just how much Wyoming residents disapprove of President Barack Obama and the direction of the country.

A majority of Wyomingites -- 52 percent -- believe Obama is doing a poor job as president, according to the Star-Tribune poll. Only 32 percent, by contrast, said he was doing an excellent or even a good job in office.

And even though Obama’s job approval ratings have been dropping throughout the country, such a high disapproval rating came as a surprise to Brad Coker of Mason-Dixon Polling & Research Inc., the Washington D.C-based polling firm that conducted the Star-Tribune poll.

“That’s as big as I have seen,” Coker said. “I don’t think Bill Clinton ever got that bad in Wyoming.”

Several of the Wyoming residents polled said they could find little to like about the president, who’s in his second year in office.

"What do I think of Obama? That was one of the biggest mistakes we ever frickin’ made,” said Barbara Gunyan, a registered Democrat from Rock Springs.

Nancy Henderson, a retired AT&T employee from Aladdin, said although she’s a registered Republican, she voted for Obama in 2008 to “get a fresh start.”

Today, though, Henderson has soured somewhat on Obama.

“A lot of things seem to be rammed down our throats,” Henderson said. “I can’t say I’m real happy with what's happening, but I still think he’s a very good man.”

“Personally, I think he’s an idiot,” he said.

Gardner said he thought almost everything Obama tried to do has turned out to be bad -- including his administration suing the state of Arizona over a state law requiring law enforcement to investigate the immigration status of anyone they reasonably suspect of being an illegal immigrant.

“He shouldn’t have fought that bill in Arizona,” Gardner said. “We let immigrants in, but they’ve got to have their immigration papers.”

One of the issues about which people criticized Obama the most is the federal health care legislation that the president lobbied heavily for and signed into law in March.

Sixty percent of Wyoming voters oppose the law, with 27 percent in support and 13 percent undecided, according to the poll.

In particular, many Wyoming voters polled said they were concerned about the provisions requiring most Americans to purchase health insurance.

Henderson said she pays an $850 monthly health care premium, and she’s unsure whether that will go down -- or possibly even go up -- under the new federal plan.

“I’m almost kind of frightened to see what’s going to happen as we go down the road to make up for people having to pay for other people’s health care who can’t afford it,” Henderson said.

Lyle Ranta, a registered Republican from Basin, said he was worried about how the health care plan would be paid for. He also questioned whether Americans already too poor to afford health insurance should have to pay a penalty.

“I think the health care bill that was passed was passed way, way too fast,” Ranta said. “I don’t think it was really, really thought into that much. I can’t see where it’s going to do us any good.”

Joyce Campbell, a London native who now lives in Powell, said she didn’t see how the new health care plan was going to work.

"I’m from England, and I saw the National Health (Service), and that was a fiasco,” said the 78-year-old Republican. “So is it going to be the same? I don’t know.”

Two-thirds of all Wyoming voters believe the country as a whole is on the wrong track, the Star-Tribune poll found -- including 82 percent of Republicans and 68 percent of registered independents.

Retired rancher Charles Springer of Sheridan, a registered Republican, said the country’s in bad trouble over the level of government spending.

“They’ve spent too much money,” Springer said. “They’re going broke. How the hell are we going to pay for all of this stuff? Somehow they’re going to have to stop them cookies in Washington from spending this money.”

But not all Wyomingites are completely against Obama.

While she’s certainly not an Obama cheerleader, Campbell said she believed the president’s often been stymied by Democratic congressional leaders.

“They’ve got some good ideas, but Congress won’t let them follow anything through,” she said. “If we had a clean sweep in the Congress – get rid of every one of them – I think that’s what they need.”

Charley Smith of Lander is a registered Republican, but he thinks members of his own party have, in large part, sabotaged anything Obama’s tried to accomplish.

“They’ve done everything they could do to destroy him, to destroy his character, attack him personally,” Smith said. “If you’re concerned about the things in the president’s agenda, come up with a better idea. And I’m not hearing an exchange of ideas – I’m only hearing an attack.”

“I think we got a poor health care bill because of lack of cooperation with the Republicans,” said Smith, who favors creating a single-payer national health care plan. “I don’t like the idea of government involvement in health care, but I don’t think we have any choice any more.”

Jeremy Dickson is known for his calm demeanor. Wife Carmen says he’s even analytical in his thought processes. Even after being mauled by a grizzly bear.

Grizzly 962 was not the first of 399’s children to die from human conflicts. Her only cub born the year before 962, nicknamed “Snowy” after its white snout, was hit by a car and killed.

A man in Wyoming allegedly tried getting out of a drunken driving charge by claiming his 4-year-old son was behind the wheel.

Wyoming hospitals were treating 249 COVID-19 patients on Thursday -- the most at any point during the pandemic.

Oklahoma slaying leads to arrest of Texans in Wyoming

Debbie Senft, 47, and Zachary Mussett, 26, both of Texarkana, Texas, are jailed in Sweetwater County, Wyoming, pending extradition to Oklahoma.

Park officials identified the missing man as 26-year-old Jared Hembree. He was last seen near Game Warden Point in Moran.

Staff euthanized the grizzly because it posed a threat to human safety, the park said. That bear had received numerous food rewards from unsecured sources, causing it to show "increasingly bold behavior."

Hero or criminal? Who is Julian Assange and what does he stand for

Hero or criminal? Who is Julian Assange and what does he stand for