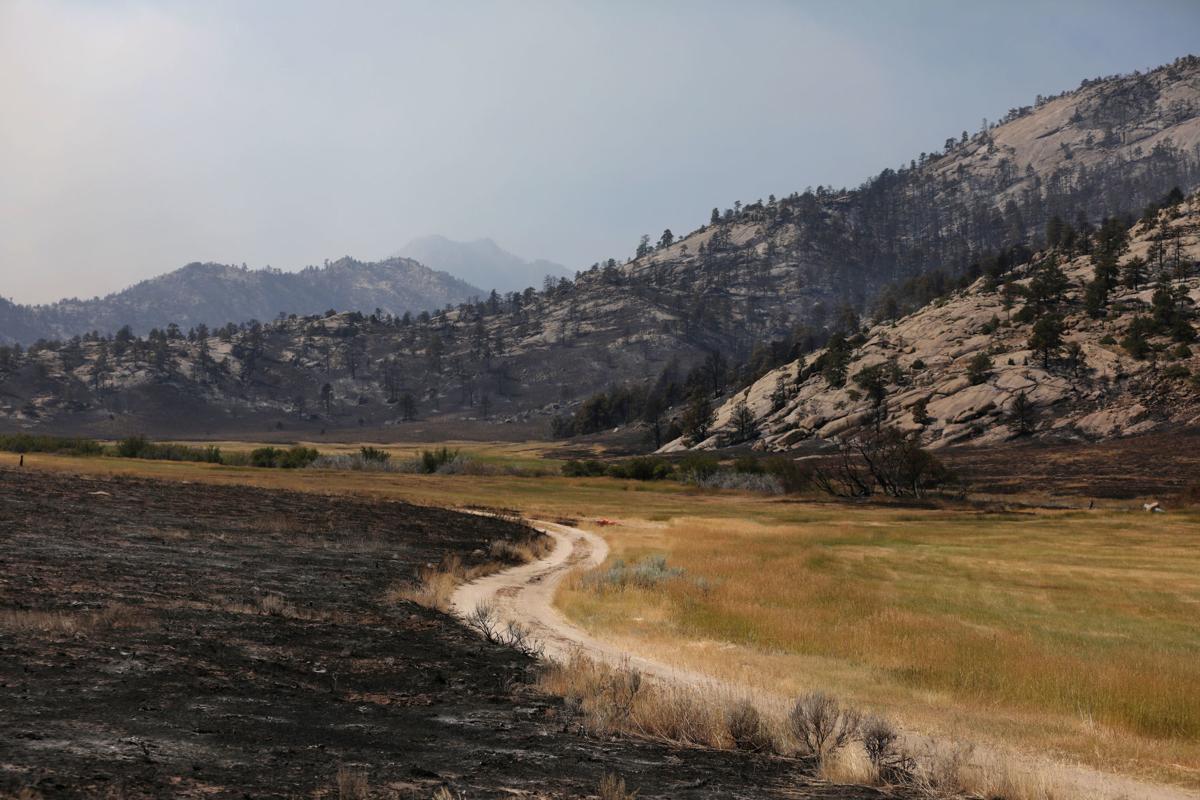 A patch of scorched ground winds along a road leading through the Pedro Mountains near Pathfinder Reservoir on Aug. 27. Wyoming's state forester Bill Crapser said the state's fire season will likely be on the "high side of normal." 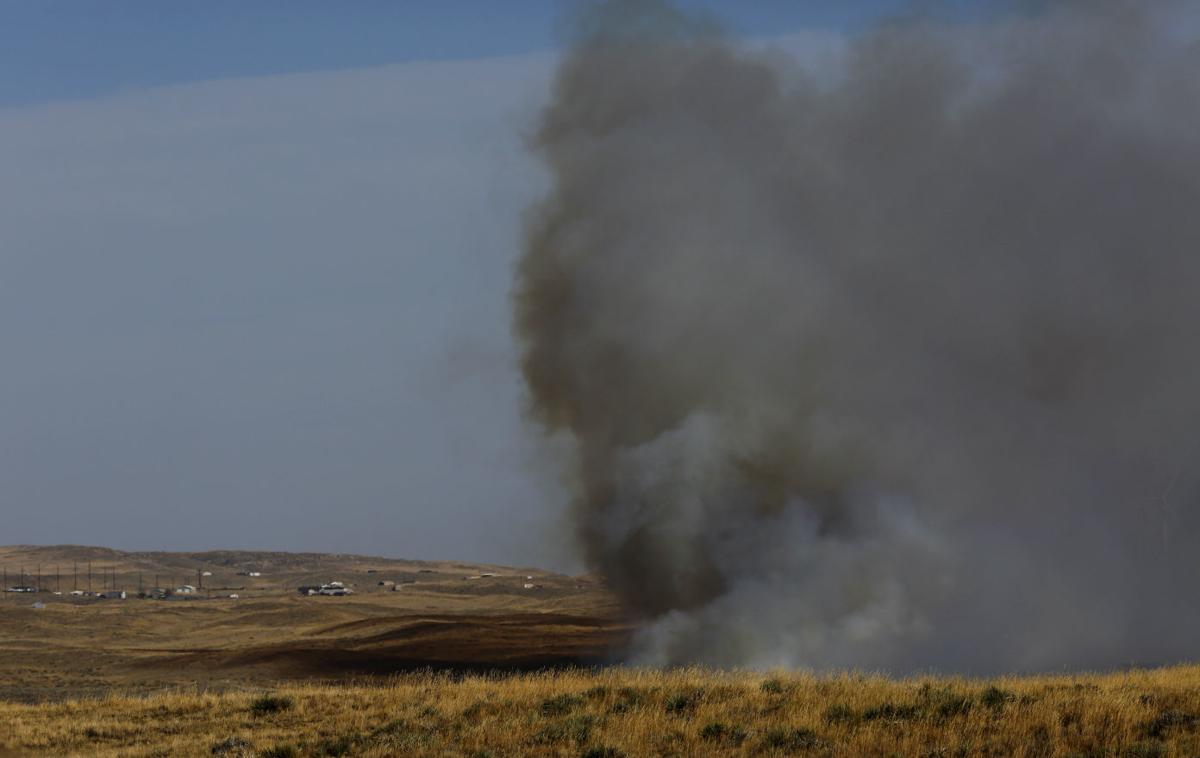 The Cole Creek Fire burns around the Casper Regional Landfill on Sunday, Oct. 11, 2015. One of the main culprits of the fire, driven by 45 mph winds and destroyed multiple homes and outbuildings, was cheatgrass.

This year won’t likely be similar to 2012, when more than half a million acres burned, but looking at the trend, each year is poised to be potentially worse than the last.

This year’s initial outlook was for an average fire season – at least average compared to the last 10-15 years – but Crapser said looking at dry conditions across the state, it will likely be on the “high side of normal.”

Reasons for the increase in fires – and fire size and heat – vary depending on the location. A century of forest management or lack of management influences some areas. Hotter, longer, drier summers fuel blazes nearly everywhere. More people living and recreating in fire-prone areas have also contributed.

But one of the most often overlooked reasons for large, intense fires are invasive species like cheatgrass.

While popular culture most often portrays wildfires as a forest issue – flames ripping across treetops, consuming valuable timber and threatening homes – in much of the West, fires are more often a prairie problem.

In fact, over half of Wyoming’s wildfires are in the prairie, winds fueling flames that gulp acres of sagebrush and grass in a blink.

This year’s fire season has already begun, with a recent prairie fire in Johnson County that surpassed 11,000 acres. Fire specialists are increasingly aware of range fires and their potentially permanent damage to the landscape. While it’s a situation that can, at times, sound hopeless, experts are working across jurisdictional lines to find solutions.

Before launching into the importance of sagebrush communities across the West, a brief history lesson of prairie fires.

Historically, fires burned through sagebrush ecosystems in higher, wetter elevations every several decades, said Michele Crist, a landscape ecologist with the Bureau of Land Management’s Fire and Aviation Program at the National Interagency Fire Center in a recent presentation on fires in sagebrush country. In lower, drier elevations, a fire might roll through every century.

But now, fires in lower elevations burn every seven to 15 years.

“The result is high rates of conversion of sagebrush to nonnative annual grasslands that continue to spread across these landscapes creating frequent fire in a positive feedback loop,” Crist said.

The main culprit has been nonnative grasses like cheatgrass. Cheatgrass, found in the U.S. in the 1800s, sprouts in the fall instead of the spring like native grasses, which means when snow cover melts, cheatgrass is growing. Because it sprouts so early, it essentially “cheats,” stealing nutrients from native grasses.

And then it cures, turning brown and drying shortly after. The grass stays dry all summer, making the area more prone to wildfire. Cheatgrass also thrives in disturbances like wildfire, allowing it to come back and spread even faster.

All of this means a rangeland that once had combinations of various native grasses, wildflowers and sagebrush are replaced by a near monoculture of short, dry stems that fire licks through each year.

Statistics emphasize the effects. Between 2014 and 2018, about 9 million acres of greater sage grouse habitat burned, according to Crist. Large fires of between 100,000 and 400,000 acres are becoming more common, spreading faster and more uncontrollably.

And fires aren’t just a problem for sagebrush ecosystems and the hundreds of species that depend on them including sage grouse, mule deer, song birds and pronghorn.

Costs of fires range from $71.1 billion to up to $347.8 billion a year when factoring fire suppression, loss of infrastructure and private property, construction costs, emergency evacuations, loss of ecosystem services and post-fire recovery, Crist said.

Casper’s Cole Creek Fire in 2015 ultimately destroyed 14 homes and killed livestock and pets. While many factors contributed to its spread, Crapser said one of the main culprits was cheatgrass.

For firefighters across the West, this season is not only about drier, hotter conditions, but also firefighting in a global pandemic.

“There’s a real emphasis and focus on aggressive initial attack, even from federal agencies, to try and keep fires small and prevent having large fire camps with lots of people in them,” Crapser said.

Gov. Mark Gordon approved basing two single-engine planes out of Casper to support initial attacks across the state. Crews right now have about a 98 percent success rate containing initial blazes. The new resources could raise that to 99 percent, Crapser said.

But local, state and federal agencies can only do so much in the face of a changing climate, changing landscape and ever increasing human-caused fires.

Two decades ago, most Wyoming fires were caused by lightning. Now, the majority of them are caused by humans, both in the prairie and forests, Crapser said.

As for ecosystem improvements – fighting the spread of cheatgrass, restoring healthier landscapes, working together among agencies to prevent catastrophic fires – Crist said the real work is just beginning.

“We are definitely making some small efforts, and we have had a lot of small successes in certain areas,” she said. “We’re in the process of building upon those successes.”

Campfires have been temporarily banned in Johnson, Weston, Niobrara and Platte counties, which includes Glendo and Guernsey state parks. These are likely the first of many fire bans this summer. Before planning a campfire, be sure to check with the appropriate land management agency to ensure there are no bans.

The state's 48 school districts are all required to submit their own plans in accordance with the guidelines in the coming weeks.

A patch of scorched ground winds along a road leading through the Pedro Mountains near Pathfinder Reservoir on Aug. 27. Wyoming's state forester Bill Crapser said the state's fire season will likely be on the "high side of normal."

The Cole Creek Fire burns around the Casper Regional Landfill on Sunday, Oct. 11, 2015. One of the main culprits of the fire, driven by 45 mph winds and destroyed multiple homes and outbuildings, was cheatgrass.